One of the most frequently-used phrases at business events these days is “the future of work.” It’s increasingly clear that artificial intelligence and other new technologies will bring substantial changes in work tasks and business processes. But while these changes are predicted for the future, they’re already present in many organizations for many different jobs. The situation brings to mind the William Gibson comment, “The future is already here—it’s just not evenly distributed.” The job and incumbent described below is an example of this phenomenon. It’s a clear example of an existing job that’s been transformed by AI and related tools. 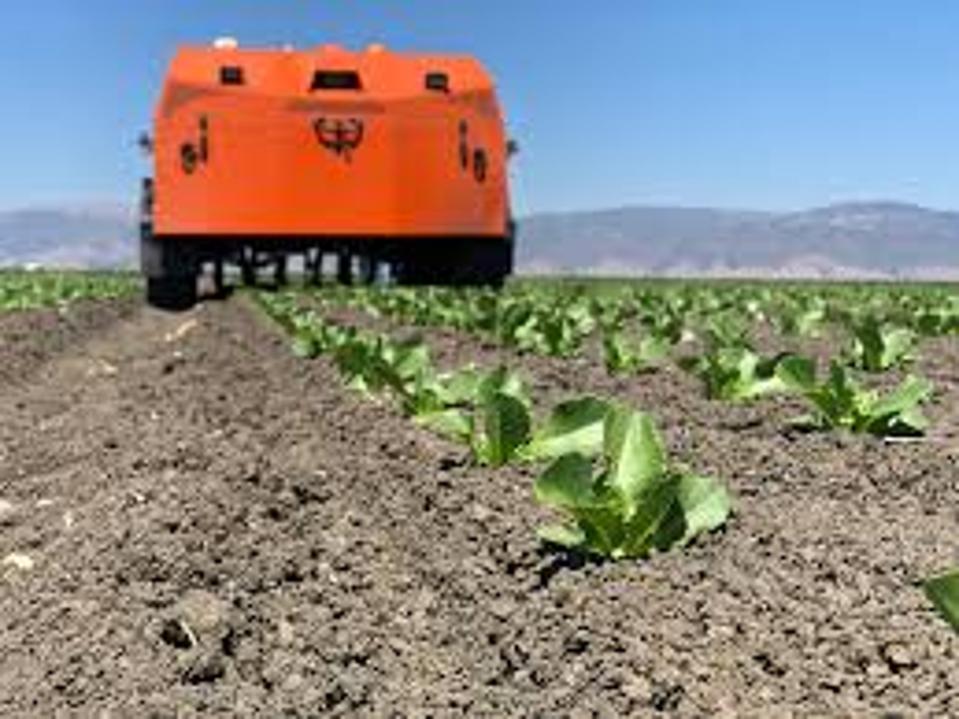 Jeff Meyer spends his days walking through farm fields, carrying an Internet-connected tablet and watching a robot cut down weeds—and not cut down lettuce. He used to drive tractors and trucks across farms in North Dakota, but, he says that his current employer, FarmWise, “caught me right away” when he was looking for a similar agricultural role in California. “I was so intrigued and excited about working with artificial intelligence for weeding.”

The need for AI-assisted weeding is on the upswing. Bayer/Monsanto’s RoundUp, heretofore the go-to choice for farmers wanting to kill weeds, has been linked to cancer. Many growers and their customers increasingly want organic fruits and vegetables anyway. And given new restrictions on border crossings, seasonal labor to pick weeds manually is in very short supply.

The AI behind FarmWise’s weeding solution is used to distinguish between a weed and a crop. The system uses deep learning models to make predictions about images taken from cameras in the robot. The robot, explained Sebastien Boyer, the co-founder of FarmWise, has been driven up and down fields while taking thousands of photos of weeds, lettuce, and other crops. Then FarmWise employees have manually labeled each image. In addition to distinguishing between weeds vs. crops, the images also detect the number of plants, their volume, and their geometry. If the plant is a weed, a set of rotary blades swing into action and cut off the top of the weed.

Boyer is passionate about improving not only farming processes, but also the jobs of agricultural workers. About the “digital weeder” job held by Jeff Meyer and about 20 other FarmWise employees, he says it’s much better than the typical farmhand role:

We give them a tablet, train them in how to do computer-based work, teach them how to fix and debug the machines. Overall they learn how to manage digitally-driven decisions. And we pay them much better than typical agricultural workers.

The Daily Work of a Digital Weeder

Meyer is just as enthusiastic about the job. He says both he and the machines—the new model is called “Titan”—have gotten smarter since he began working for FarmWise. “The new machine is more user-friendly, and the implements that do the weeding and other tasks are much more accessible,” he said.

Meyer says that he is viewed as an “operator” of the machine—and he manages other operators as well as a Regional Manager for FarmWise—but he views himself as a quality control person. “I do lots of troubleshooting,” he explained. “Like any new technology our machine has some bugs, and we are getting rid of them one by one.”

When something goes wrong with the weeding process—say, a blade gets bent by a rock, or it opens up a little late to cut the weed—he gets an alert on his tablet. He investigates the problem and intervenes if necessary. If he can’t fix the problem himself, he has “an on-call team with smart guys on computers” who can drop in via the Internet and check what’s going on in the machine. Every day, Jeff says, he gets better at fixing things locally. He said he used to have to troubleshoot for a couple of hours to fix a problem, and now it’s usually only a few minutes. The software, he noted, is getting much more reliable; the hardware, since it’s a new model of robot, has more issues.

Meyer arrives at each field to be weeded with the robot, pulled behind a pickup truck on a trailer. The robot has its own diesel engine and moves on four wheels (“big ones now, and four wheel drive on the new robot,” he noted, “so it doesn’t get stuck much.”) The machine moves up and down the rows and handles about an acre per hour of weeding. “The hardest part of the job is keeping up with the machine,” he said.

Meyer also handles the direct interactions with the grower. A sales manager arranges for Farmwise to do the weeding, but Jeff handles the scheduling with the grower, and is the first point of contact for any questions or concerns. Some of the growers are new to working with the company, and some have already used FarmWise for several growing seasons. Typically the digital weeding is only needed once per season. For the robot to cut them, the weeds need to be a certain size—high enough to be cut, and low enough to fit under the robot.

The Future of the Digital Weeder

Jeff Meyer is confident that there will always be a need for his job. Even if the software and hardware were perfect, he says, there would still need to be someone to interact with the growers and bring the robot to the fields.

There will also be other jobs for the robot to do, he says. Boyer commented that weeding was just the first in a series of tasks that Farmwise can perform for growers. Eventually the “agbot,” as some call it, will be able to plant seeds, spray microdoses of pesticides if necessary, inject  variable rates of fertilizer, and perhaps even harvest. He refers to the overall concept as “personalized care for plants.”

Of course, FarmWise faces the possibility of competition from larger and more general-purpose agricultural machinery companies like John Deere and CNH Industrial. Perhaps the tractor or implements pulled behind it could take care of weeding, photographing plants and weeds, and the other tasks that the FarmWise Titan performs. Boyer and his co-founder worry about that, but Jeff Meyer doesn’t. “I love what I’m doing out here. It’s great to be outside and I am learning a lot. And I keep plenty of sunscreen in the first aid kit.”

Box Office: Disney Firing Of James Gunn From ‘Guardians 3’ Was A Lucky Break For Marvel

Chinese Companies Must Play By American Rules Or...

The PS5 Design Is Covered In Cool Little...

How To Watch The Decade’s Final Rocket Launch,...

Apple’s Powerful iPhone Will Be Lost And Forgotten