Breaking
Florida Supreme Court Tells The American Bar Association...
How to Write Perfect Paid Social Media Marketing...
How To Boost Productivity In Your Small IT...
How Restaurants Can Design a More Sustainable Food...
Expenses That Small Business Owners Need to Be...
How You Can Make Saying Goodbye To The...
Biden To Meet Royal Family At Cornwall’s Eden...
It’s Going To Be Emotional — Going International...
Peer Mentoring For Students: STEM & Buds
7 PR Trends in 2021: The Story So...
Google Plans Radical New Google Pixel Smartphone Upgrade
Where Did COVID Come From?
Ride To Growth With A Business Vehicle
C3.ai’s Tom Siebel: How To Scale AI
Moz Acquired by iContact Marketing Corp
10 Examples of Brands Using TikTok Stitch and...
Home Business The Golden State Warriors Can Now Keep Damion Lee And Marquese Chriss For The Long Haul
Business 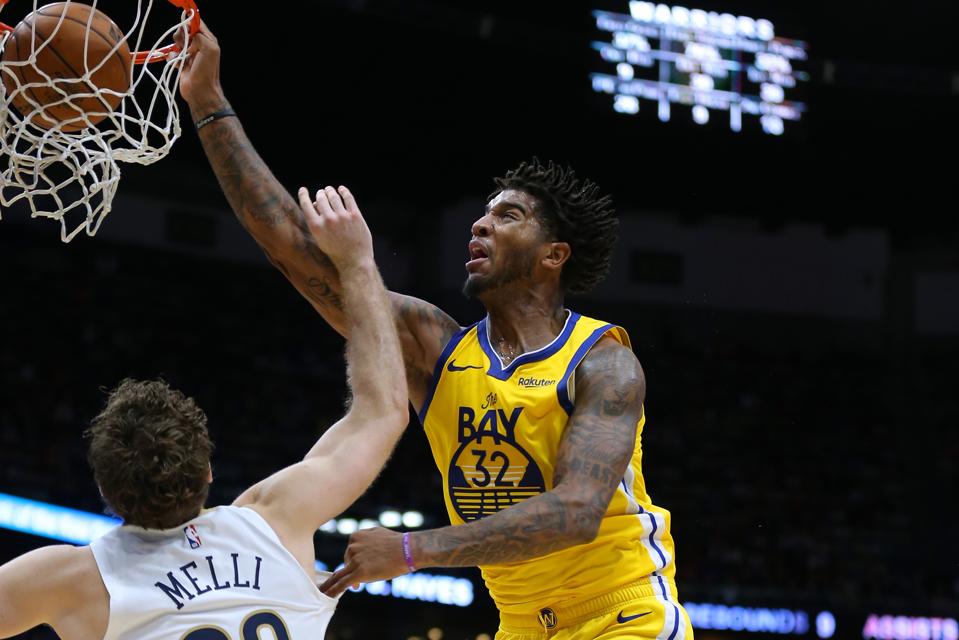 NEW ORLEANS, LOUISIANA – NOVEMBER 17: Marquese Chriss #32 of the Golden State Warriors dunks over … [+] Nicolo Melli #20 of the New Orleans Pelicans during the second half of a game at the Smoothie King Center on November 17, 2019 in New Orleans, Louisiana. NOTE TO USER: User expressly acknowledges and agrees that, by downloading and or using this Photograph, user is consenting to the terms and conditions of the Getty Images License Agreement. (Photo by Jonathan Bachman/Getty Images)

For the Golden State Warriors, this lost season is all about putting in place the building blocks for another contender around their star trio of Steph Curry, Klay Thompson, and Draymond Green.

At the center of that mission is developing a viable supporting cast. The Warriors have flipped all their veteran depth for younger pieces in the hope some of them stick. That’s why it was so surprising to see them waive one of their more promising youngsters, Marquese Chriss, recently. Despite the promising play of their 22-year-old athletic big man, it was a move they had to make after they used up all of Damion Lee’s two-way days, who is now expected to sign a multi-year deal with the team.

Marquese Chriss is back

Credit to the Warriors front office, though. After Chriss went unclaimed on waivers they were free to strike. And strike they did, bringing Chriss back on the two-way spot that Lee is vacating. For Chriss it is a bit of a demotion, but it’s likely only in the short-term.

The Warriors will be able to have him join their NBA team for only 23 days, which is what is left on a pro-rated two-way contract at this point in the season. However, the Warriors will have enough room under the hard cap that they are subject to until 1st July to sign Chriss to another minimum deal in early March, or wait until the G-League season is over on 23rd March and call him up full-time then. In reality, Warriors fans probably won’t see a whole lot of difference in how much time Chriss is with the team.

It’s a smart piece of salary cap chicanery from a front office severely limited by the hard cap. The salaries for two-way contracts don’t count towards the team’s cap, offering the Warriors a small loophole. They’ve effectively exploited that by squeezing a full NBA season’s worth of production out of this two-way contract spot, on top of the contributions they’ve received from their other two-way player Ky Bowman.

The Warriors will have team control over both Chriss and Lee

Perhaps the most interesting element of this swap is that the Warriors now have the option to have team control over both Lee and Chriss for the future. In Lee’s case it’s straightforward – they are signing him to a long-term deal. That will give them a backup shooting guard who has proven he can be trusted to knock down shots off the bench against the better teams in the league.

In Chriss’ case this is because two-way contracts are very team-friendly. Players on two-way contracts become restricted free agents at the end of a season if they have played at least 15 days with their NBA team that season, whereas a player who is on a veteran minimum contract, as Chriss previously was, does not generate any sort of team rights if it’s their first year with that team. Instead, now Chriss is on a two-way contract, the Warriors will be able to extend a qualifying offer, which the rules stipulate must be a veteran minimum contract as Chriss will have played four years in the league.

What’s more if the Warriors convert Chriss’ two-way contract to a minimum deal in March they can, by agreement with the player, sign him to a longer deal. This is what they did with Quinn Cook a couple of years back, and what they are doing with Lee now.

The Warriors now have almost all of their roster on multi-year deals. Along with Curry, Thompson, Green, and D’Angelo Russell, who are all on long-term deals, Lee will join Kevon Looney, Eric Paschall, Jordan Poole, Jacob Evans, Omari Spellman, Alen Smailagic as players who have guaranteed money next year. They will also be able to bring back Chriss and Bowman next season. That’s 13 players under contract, or team control, with only four over the age of 23. Add in Willie Cauley-Stein’s player option and the Warriors have basically a full roster going into the summer.

The Warriors will, of course, be making plenty of moves in the summer, not least exploring options with Russell and their first-round pick, which will likely be higher than any they’ve had for over a decade. They’ve got the Andre Iguodala trade exception to use, as well as probably the taxpayer Mid Level Exception, which they may well use on … Andre Iguodala.

So some of the young pieces they’ve amassed will have to move on. But crucially, it will be the Warriors choice about who stays and who goes. In the interim, they’ll continue to get a good look at what each of those players can bring to next year’s team. In Chriss and Lee, the Warriors will be hoping to continue to see the development that’s encouraged them to invest in both players, potentially for the longer term.