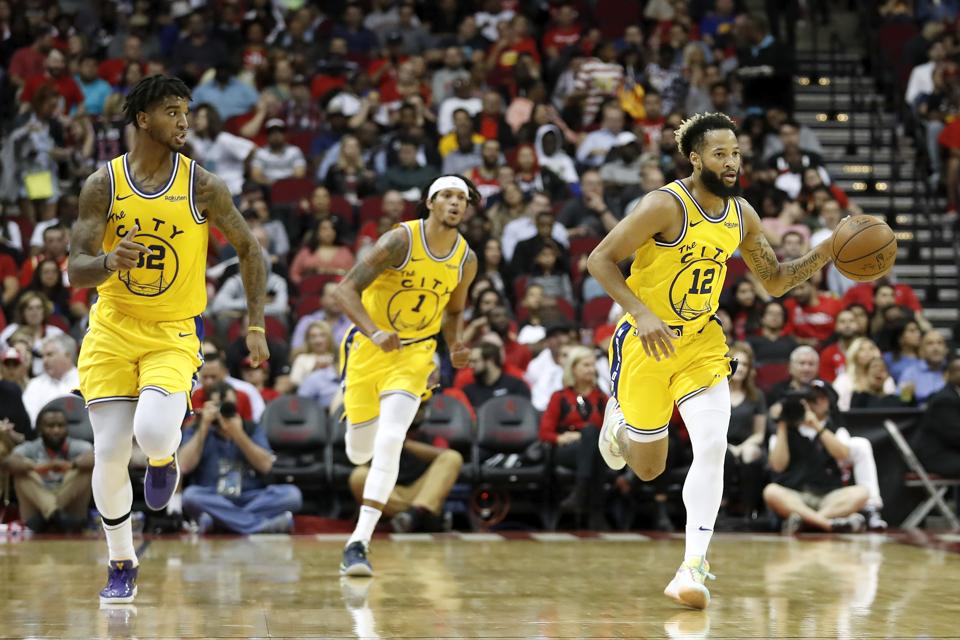 HOUSTON, TX – NOVEMBER 06: Ky Bowman #12 of the Golden State Warriors brings the ball up court in … [+] the second half against the Houston Rockets at Toyota Center on November 6, 2019 in Houston, Texas. NOTE TO USER: User expressly acknowledges and agrees that, by downloading and or using this photograph, User is consenting to the terms and conditions of the Getty Images License Agreement. (Photo by Tim Warner/Getty Images)

All season long the Golden State Warriors have been dancing with the hard cap that was imposed by the sign-and-trade for D’Angelo Russell. That restriction has meant that the Warriors are unable to use their 15th roster spot until early March. But the performances of their two-way players, Damion Lee and Ky Bowman, have forced their hand. One of the few bright spots in a miserable, tanking season, the Warriors have had to find a way to keep Lee on the roster.

For the last few weeks various trade rumors have circled veterans like Alec Burks, Willie Cauley-Stein and Glenn Robinson III. But instead the Warriors have surprisingly chosen to waive 22-year-old Marquese Chriss, who had been one of their more promising young big men. So why have gone down this route?

The math is clear

The Warriors had just under $375,000 left under the hard cap ($374,924 to be precise according to The Athletic’s John Hollinger) before waiving Chriss. This was not enough money to add another contract for the rest of the season. Lee, on the other hand, only had two days left on the 45-days that a two-way player is allowed to spend with their NBA team.

The move has created $1,236,685 of room under the hard cap according to EarlyBirdRights.com, enough to add Lee full-time to the roster. It’s a swap of a 22-year-old big man with promise for a 27-year-old wing who has performed well over the last couple of seasons for the Warriors.

The Warriors have few assets to offer

The real question is why they haven’t been able to open a roster spot elsewhere. This season is all about the youth development for the Warriors and losing a young player to add an older player is arguably counterproductive. If Chriss had not performed well, it would be understandable. But he’s done fine in the minutes he’s been given, and progressed as the season wore on.

There have been other young players who have been much worse for the Warriors, and look unlikely to be part of a future team. Chriss was the odd man out because he was the only player on a non-guaranteed deal, taking over from Alfonzo McKinnie who similarly waived for Chriss because they had no other way to create a spot.

This pattern rather suggests that the Warriors are a tight spot in making any moves around the edges of their roster, having depleted their ability to offer sweeteners in the summer. They have given away all their cash, and almost all their future second-rounders in deals for Alen Smailagic, Eric Paschall, Omari Spellman. As it stands the Warriors have only their 2022 second-rounder in 2025 in the next six drafts. Paschall definitely looks worth it, though he only cost one second-rounder. Whether Smailagic is worth two second-rounders is a question that won’t be answered for a while yet.

Over recent weeks trade rumors had circulated in particular around Alec Burks, who is having a breakout year thanks to the opportunity to put up big stats on a bad team. He certainly has looked like the sort of player who could help a playoff team in need of some scoring punch off the bench. Perhaps the Warriors are waiting for a better deal to come along, potentially adding a future second-rounder to their depleted chest, or want to use him to dump one of their less productive young players whose contract is guaranteed for next year.

But as it stands it is curious, and a little concerning, that they apparently couldn’t find a way to keep a solid contributor around without losing one of their brighter prospects around. The cavalier approach the Warriors took to their future second-round picks in last year’s draft is coming back to bite them a bit.

Ultimately though, this is a story about the success of their two-way players. The Warriors have had success with these contracts previously, with Quinn Cook being among the league’s early beneficiaries. Lee has been on a two-way deal for a while now and has clearly earned a shot at a full roster spot. He’s averaging 12.5 points, 5.3 rebounds, 2.2 assists across 23 appearances.

Indeed given what happened last year in the playoffs the Warriors may have been better off converting his two-way contract to a full deal to add some wing depth. Lee had not quite reached the heights he has this season, but he did have some good performances against some good teams, not least an impressive outing in Philadelphia that helped the Warriors clinch a win with Klay Thompson out. In the end they felt they needed the depth and veteran wisdom of Andrew Bogut, but it was a close-run decision.

As for Ky Bowman, who has been their third best guard behind Russell and Lee, he still has a few more days left on his two-way deal. The Warriors may yet make a move to free up a spot, but as it stands he will spend the rest of the G-League season in Santa Cruz before rejoining the main squad in early March.

Maybe the Warriors will find a way to keep Chriss around. They now have a vacant two-way slot, and perhaps they can find a way to make trade closer to the deadline to free up another roster spot despite their depleted assets. But given how well Chriss has played, it’s likely another team will snap him up. And that will be a loss for the Warriors with its roots firmly in their summer moves.

How Do Robert Saleh, Brian Daboll And Jim Schwartz Fit With The Browns?

Gwyneth Paltrow’s Goop Should Stay In Its Lane, Far Away From People With Cancer