Breaking
4 Tips For Attracting Your First ‘Dream Client’...
Want To Generate More Sales This Holiday Season?...
Your ‘Harvest Moon’ Moment Is An Illusion: Why...
Google Meet’s Unlimited Calling Will Continue To Be...
The Need For Speed-Is Quantum Computing A Good...
Stock Market Crash: The End Game Approaches
Best Video Conferencing Software
House Democrats Debate Bill To Allow Student Loan...
For These Indigenous Artists “Land Back” Is Both...
The Current Tech Stock “Bubble” Reflects Pessimism, Not...
A Look At What’s Inside House Democrats’ New...
Page Authority 2.0: An Update on Testing and...
How Public Health Experts Are Harnessing The Power...
This Husband And Wife Built A Luxury Brand,...
This Husband & Wife Built A Luxury Brand,...
Luxury Footwear Brand Chelsea Paris Re-Launches And Stays...
Home Business The Good, Bad And Ugly From The Green Bay Packers’ Playoff Win Over The Seattle Seahawks
Business

The Good, Bad And Ugly From The Green Bay Packers’ Playoff Win Over The Seattle Seahawks 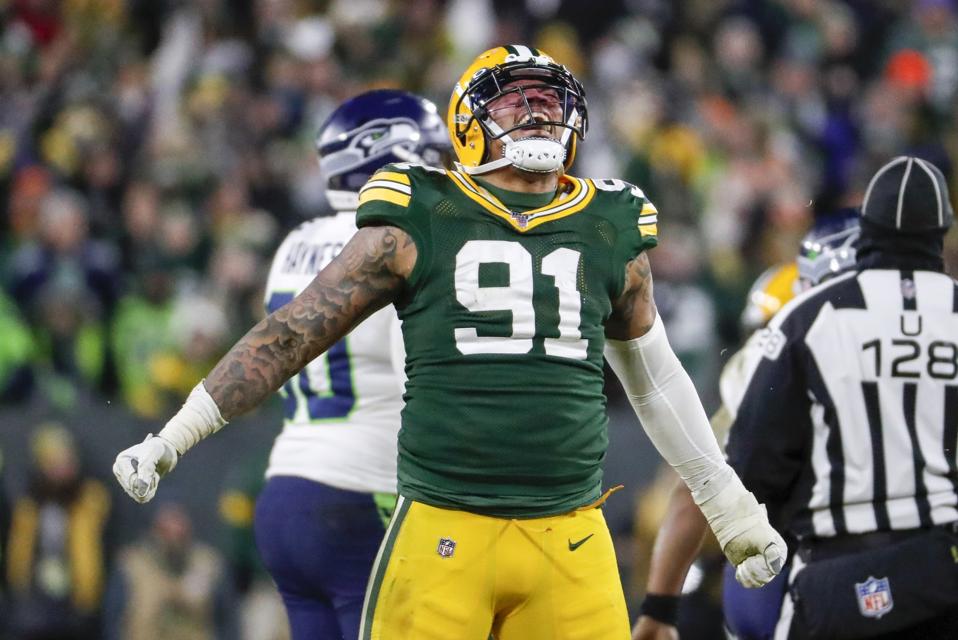 Preston Smith (91) and the Green Bay Packers are one step away from the Super Bowl after defeating … [+] the Seattle Seahawks in the divisional playoffs Sunday,

Back in September, the wise guys in Las Vegas gave the Green Bay Packers just the third-best odds to win the NFC North at +220.

They set the over-under on Green Bay’s wins at 9.0.

And they set the Packers’ odds of winning the NFC at 10-to-1.

If you placed a few marbles on Green Bay, you already cashed in on those first two wagers. Now, the Packers are just one win away from winning the NFC.

San Francisco defeated Green Bay, 37-8, back in Week 12. Before we get to that contest, here’s the good, bad and ugly from the Packers’ win over the Seahawks.

DAVANTE ADAMS: The Packers didn’t think Seattle could cover their top receiver — and they were right. So Green Bay quarterback Aaron Rodgers fed Adams early and often — no matter who was in coverage.

Adams finished the night with eight catches for 160 yards and two touchdowns on his 11 targets. In the first half alone, Adams was targeted seven times and caught six balls for 88 yards and a touchdown.

Adams whipped safety Ugo Amandi for a 20-yard touchdown on the Packers’ first possession of the game. Then midway through the third quarter, Adams schooled cornerback Tre Flowers on a 40-yard touchdown.

Adams’ 160 receiving yards broke the Packers’ postseason record of 159 set by tight end Jermichael Finley in a 2009 Wild Card game against Arizona. And with the Packers trying to run out the clock in the final 2 minutes, Adams had a 32-yard reception on a third-and-8 play.

“My last time I came off of a bye in the first round, I was able to have a really good game,” Adams said. “So it was something that I kind of reminded (quarterback Aaron Rodgers) about, and it was something that he threw right back at me — he was already thinking about it. When we get on the same page and we’re able to find each other and get on the right wavelength early, I think that it’s really tough to beat this team.”

JIMMY GRAHAM: The Packers tight end has been much-maligned through a rough year. On this night, though, Graham had three receptions for 49 yards.

“It’s awesome to be able to step up and be there for my guys and be there for my team,” said Graham, who played in Seattle from 2015-‘17. “I love these guys in here. We’ve been through a lot this season and we, a lot of people never really believed in us from the get go, from this offseason. People say we win ugly, but we’re winning and that’s all that matters.”

The Seahawks had rallied from an 18-point deficit and closed within 28-23 when they got the ball back with 4:54 remaining. On third-and-5, though, Packers outside linebacker Preston Smith came from Wilson’s blindside and sacked him for a 6-yard loss.

Instead of going for it on fourth-and-11, Seattle chose to punt with 2:41 left. The Packers proceeded to get two first downs and run out the clock.

Green Bay finished with five sacks, but Smith’s was undoubtedly the biggest.

“He was as advertised,” Packers defensive end Dean Lowry said of Wilson. “He was elusive, he had great vision. He knew how to break tackles and he had some plays where he extended plays and made some Russell Wilson type plays. But for the most part, I thought when we had to, we stopped him pretty well. And it was a good win.”

AARON RODGERS: Green Bay’s quarterback had an up and down season.

Rodgers’ passer rating this season was 95.4, his third-lowest since becoming a starter in 2008. His completion percentage (62.0%) and yards per attempt (7.0) were also the second-lowest in that time.

In the second half of the 2019 campaign, Rodgers had a quarterback passer rating of 84.2. And in the last three games, he completed an un-Rodgers like 53.9% of his passes.

“I mean winning is always satisfying,” Rodgers said. “But there are moments in the season that rank higher than others and this obviously is one of those moments where based on the way their offense was moving the ball, I knew I was going to have to make some plays tonight.

“I felt good about my preparation and the performance. I felt really locked in from Wednesday on and practiced well and felt really good today all day. Just felt like today was going to be one of these type of performances tonight.”

RED ZONE EFFICIENCY: The Packers ranked eighth in the NFL this season in red zone efficiency, scoring touchdowns on 64.0% of their drives inside the 20.

Green Bay then took it up a notch Sunday, scoring on all three of its trips inside the 20.

Aaron Rodgers threw a 20-yard touchdown to Davante Adams on the Packers’ first drive of the game. Aaron Jones then had a pair of 1-yard touchdown runs in the second quarter.

SECOND HALF DEFENSE: It’s hard to place too much blame at the feet of Green Bay’s defense.

Seattle quarterback Russell Wilson will be a first ballot Hall of Famer one day. And after trailing, 21-3, at halftime, the Seahawks put the offense entirely on Wilson’s shoulder.

Wilson then delivered, leading Seattle on three consecutive touchdown drives to open the second half. On multiple occasions, the Packers were within a fingernail of sacking Wilson, only to have the elusive quarterback escape and eventually convert big plays.

“You’re not going to face many quarterbacks like Russell Wilson,” Packers cornerback Tramon Williams said. “The guy is great, man. Great in his own way. We knew it, and we knew we got out to a big lead, we knew that he was going to make the plays that he needed to to get his team back into the game.

Hollister was ruled down by contact and the Packers challenged the call. The instant replay ruling was that Hollister did indeed fumble the ball, but there wasn’t conclusive video evidence that Green Bay recovered the ball.

That was certainly news to Packers corner Chandon Sullivan, who appeared to recover the ball and later handed it to the official. But in a year of uneven officiating and instant replay reviews, this was another call that missed the mark.