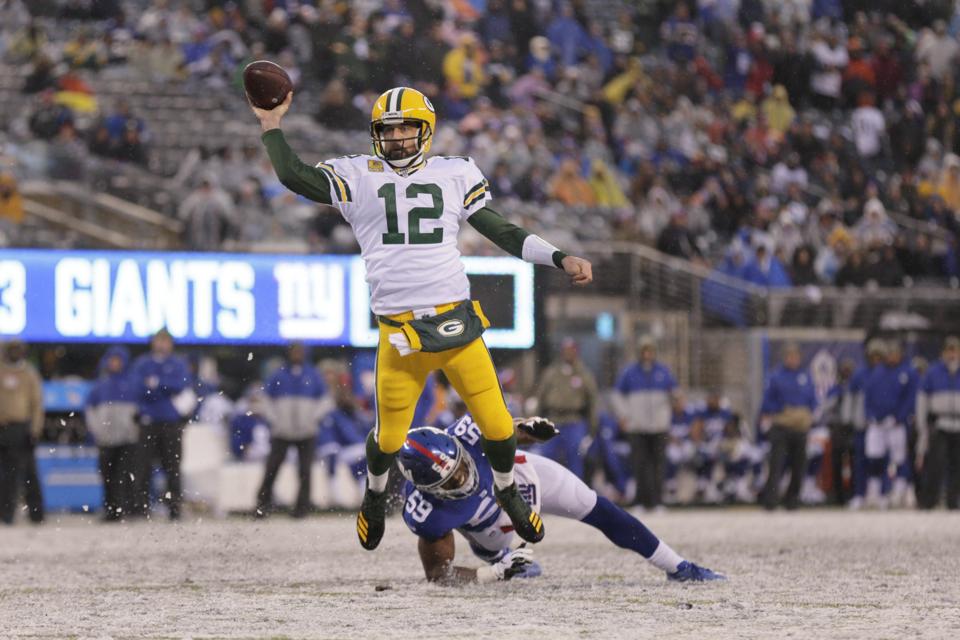 The Green Bay Packers weren’t flashy in their 31-13 dismantling of the New York Giants on a snowy Sunday afternoon. But the Packers were meticulous and efficient while defeating an inferior foe.

Green Bay improved to 9-3 overall and took a ½-game lead over Minnesota (8-3) in the NFC North. The Vikings are at Seattle Monday night.

The Giants lost for an eighth straight week and slipped to 2-10.

Here’s the good, bad and ugly from Green Bay’s win over the Giants.

AARON RODGERS: Green Bay’s former MVP-quarterback had been in a miserable slump. Rodgers had thrown just two touchdowns in his last three games and hadn’t posted a passer rating higher than 85.5 since October.

“I’ve got to take the lead and get hot in December here and we’ve got to start finding ways to get the ball to our guys all the time,” Rodgers said last week.

Rodgers certainly got hot against the overmatched Giants’ secondary, throwing four touchdowns and completing 21 of 33 passes for 243 yards to finish with a 125.4 passer rating.

Rodgers threw a pair of TDs to Davante Adams, and one each to wideout Allen Lazard and tight end Marcedes Lewis.

Granted, the Giants entered the game ranked just 27th in passing yards allowed per game (260.0) and 25th in opponent passer rating (99.5). But after a rough month, Rodgers needed to get back on track and did just that.

ALLEN LAZARD: The Packers have been desperately seeking a No. 2 wide receiver all season. The search might be over.

Lazard, who went undrafted in 2018 and spent most of last season on Jacksonville’s practice squad, has become Aaron Rodgers’ second-most trusted receiver.

On Sunday, Lazard caught three passes for 103 yards and a touchdown. In the first half alone, Lazard had two catches for 80 yards and a 37-yard touchdown reception.

The Packers have been looking for somebody — anybody — to emerge as a complement to Davante Adams. Perhaps that search is over.

“It’s never been too big for him, it really hasn’t,” Rodgers said recently of Lazard. “That’s a characteristic of the guys that we’ve had here who have been contributors, consistent contributors.”

MASON CROSBY: Very quietly, the Packers’ kicker is having a Pro Bowl-type season.

Crosby will become an unrestricted free agent at the end of the year. And after a season like Crosby is currently having, the Packers would be foolish to let him get away.

BRYAN BULAGA: The Packers’ standout right tackle suffered a sprained MCL a week ago that knocked him out of Green Bay’s loss to San Francisco. Originally, it appeared Bulaga would miss at least a game or two. Instead, Bulaga was in the starting lineup Sunday and held up extremely well.

Bulaga’s return was huge for Green Bay’s offensive line. When Bulaga exited a week ago, the dropoff to Alex Light was dramatic and one reason the Packers allowed five sacks against the 49ers.

With Bulaga back this week, Green Bay didn’t allow a single sack.

Cornerback Kevin King intercepted Jones in the first half, and both safety Darnell Savage and cornerback Tramon Williams picked Jones off in the second half.

The Packers’ opportunistic defense helped them limit Jones to a 49.4 passer rating.

DAVANTE ADAMS: Green Bay’s Pro Bowl wide receiver didn’t have a touchdown reception through the first 11 weeks of the season. But Adams has three touchdowns in the last two games — including two against the Giants.

RUN GAME: The Packers couldn’t get their running game going and finished with just 79 rushing yards in 26 carries (3.0).

DAVID BAKHTIARI: The Packers’ left tackle was rated as the No. 1 tackle in football last season by Pro Football Focus. But Bakhtiari hasn’t played near that level in 2019.

On Sunday, Bakhtiari was whistled for his 12th penalty of the year — the most in the NFL. If Green Bay is going to make a deep postseason run, Bakhtiari must return to his pre-2019 form.

ROBERT TONYAN: The Packers second-year tight end had a pair of critical penalties, despite a limited snap count.

Tonyan was called for holding in the fourth quarter, which negated a touchdown by Aaron Jones. Then with the Packers trying to run out the clock, Tonyan was flagged for a false start, which eventually forced Green Bay to punt.

Messi Genius Decisive: What We Learned From FC Barcelona Versus Atletico Madrid

How To Use Social Media Messaging To Generate...

Vonnegut Was Right: You Can Study Stories With...

The Best Inns and Hotels in Kennebunkport

How No-Code Apps Can Help You Launch A...

3 Things You Should Automate Now