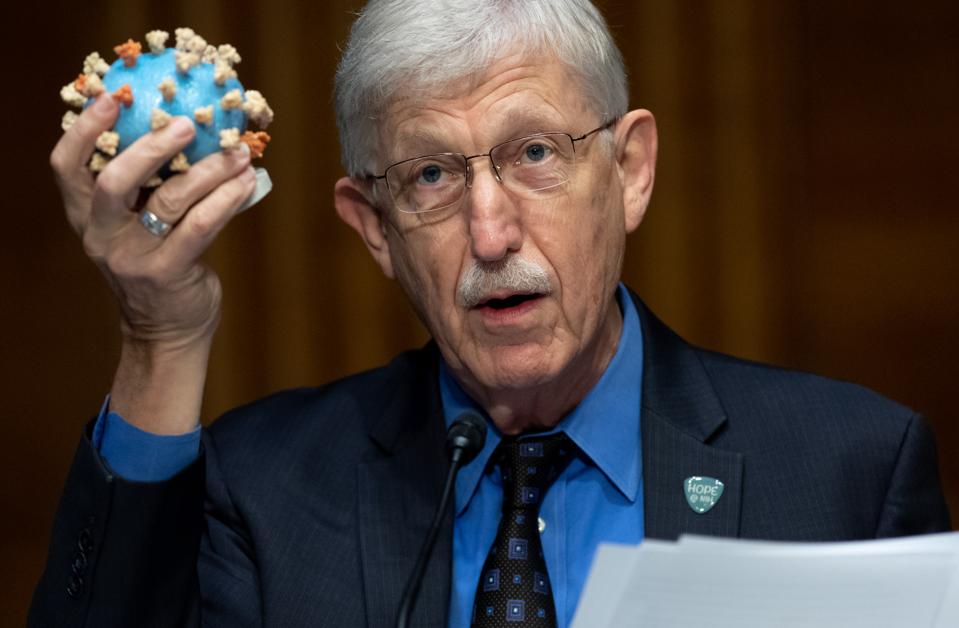 NIH Director Dr. Francis Collins holds up a model of Covid-19 during a U.S. Senate hearing.

The National Institutes of Health awarded $248.7 million to seven companies to accelerate the development of new coronavirus diagnostic technologies as the country grapples with rising case numbers and testing shortages. The federal research agency expects some of the companies to potentially be able to perform hundreds of thousands of tests come September.

The list includes two public companies—Quidel and Fluidigm—and five privately-held companies—Mesa Biotech, Talis Biomedical, Ginkgo Bioworks, Helix OpCo, and Mammoth Biosciences. All of the companies are based in California, with the exception of Ginkgo Bioworks, which is based in Boston, Massachusetts.

“This is a very substantial investment to try to speed up the availability of Covid-19 testing to deal with this global pandemic,” NIH Director Dr. Francis Collins said in a telephone briefing on Friday. He also noted the “phenomenal speed” at which NIH was able to get the program up and running in three months after its April launch. Each of the companies has entered into a contract outlining specific terms and milestones.

The United States has recorded more than 4.4 million coronavirus cases and 150,000 deaths. With national demand outpacing the current availability by millions of tests, the NIH is investing in technologies that could be administered across multiple settings, ranging from handheld devices in doctor’s offices to high-throughput sequencing of tens of thousands of samples in commercial labs. “These are not cookie cutter. They can be performed in a variety of settings to meet diverse needs,” said Collins. Some of the tests have already received emergency use authorization from the U.S. Food and Drug Administration, while others are still waiting for the green light.

The contract awardees, who will use the funds to scale up manufacturing of their technologies, were winnowed down from an initial applicant pool of more than 650 companies in a “shark tank” style initiative, modeled after the reality television program that pairs entrepreneurs with investors. The competition is part of a greater Rapid Acceleration of Diagnostics Initiative, or RADx, which received a total of $1.5 billion in funding from the federal stimulus package.

Four of the companies have developed lab-based testing technologies. South San Francisco-based Mammoth Biosciences was the only Crispr-based technology to make the cut. Mammoth says its gene-editing technology can offer a faster, highly accurate alternative to the standard polymerase chain reaction tests. The company’s co-founders Trevor Martin, Janice Chen and Lucas Harrington were Forbes 30 Under 30 2019 honorees. Boston-based Ginkgo Bioworks is using automation and next generation sequencing technology to be able to process tens of thousands of tests at once. The company made the Forbes Next Billion Dollar Startup list in 2019 and is valued at over $4 billion.

Ginkgo expects to be able to turnaround results in 24 to 48 hours, as does San Mateo-based Helix OpCo, which is also using automation and sequencing technology. These kind of tests could be useful for schools, universities, healthcare systems and employers that need to be able to rapidly test large populations. Both companies expect to process up to 50,000 samples per day by the end of September and 100,000 per day by the end of the year, according to the NIH. San Francisco-based Fluidigm has developed technology to test thousands of saliva samples per day.

Three of the companies offer tests that could be delivered at point-of-care facilities, such as doctor’s offices, pharmacies and nursing homes. San Diego-based Mesa Biotech and Menlo Park-based Talis Biomedical have both developed cartridge-based technologies that provide results in around 30 minutes. San Diego-based Quidel has a lateral flow system that can produce results in 15 minutes, and is good for use in nursing homes.

The NIH is continuing to evaluate more than 20 companies for a second round of awards in the coming weeks. “Not everybody survives the innovation funnel,” said Collins. “Even though we’re announcing seven success stories, there’s a lot of broken hearts out there, too.”

Accelerate Your Marketing During This Pandemic With A Client Avatar

Moonshots And MoneyMakers: The New Paradigm For Entrepreneurs