Breaking
Growing Your Retirement Money Using 401(k) Dollar-Cost Averaging
Wellness Exec Abby Miller Levy Partners With Venture...
Microsoft Teams Issues Strike To Zoom With Tidal...
What’s Coming For The S&P 500 In October
4 Ways You Can Showcase Empathy With Your...
A $22,000 Microsoft Surface Will Soon Be For...
Zooming In – Should SMEs Invest In The...
iOS 14: The Surprising Security Risk Of Sharing...
How A Break From Lord Sugar Changed The...
Sunday’s Google Doodle Is Actually About Google
Office Of The Comptroller Of The Currency Chief...
Source Code For Multiple Windows Operating Systems Publicly...
Why Forgettable Pfizer Really Is A Great Value...
Hot For The Holidays? Amazon Home Drone, Kid...
Best Small Business Loans
The FAAMG Stocks Drive The Markets
Home Finance The Great Money Experiment is Over
Finance 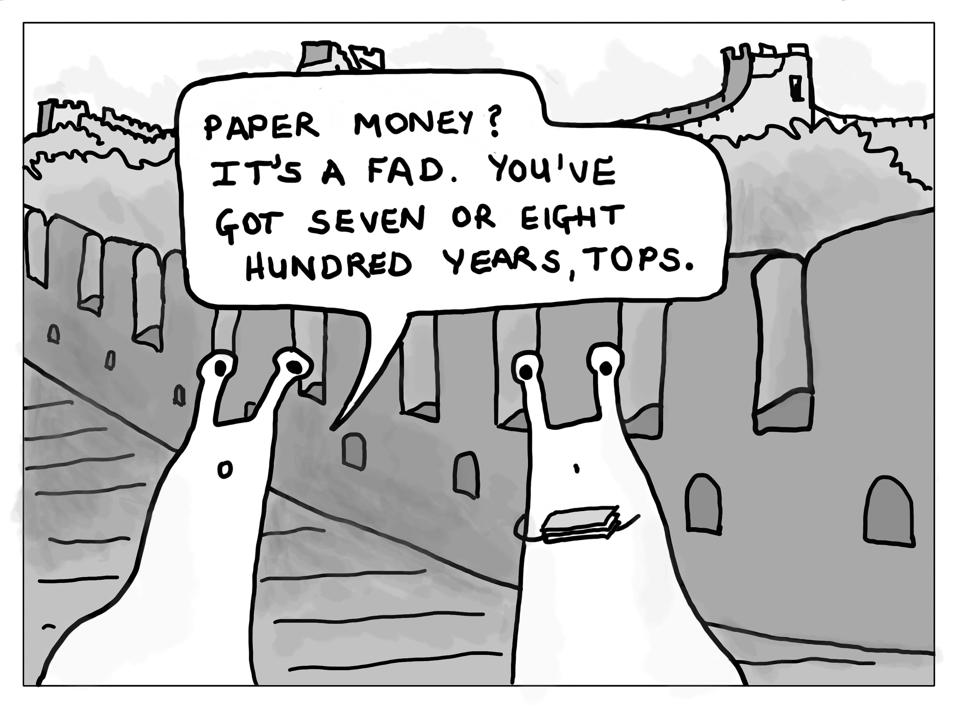 The Chinese were first with the transition from commodity money to paper money, from money that was atoms to money that was atoms about atoms. They had the necessary technologies (you can’t have paper money without paper and you can’t do it at scale without printing) and, more importantly, they had the governance. In 1260, Kublai Khan wisely decided that it was a burden on commerce and drag on taxation to have all sorts of currencies in use, ranging from copper coins to iron bars, to pearls to salt to gold and silver, so he decided to implement a new currency. The Khan decided to replace metal, commodities, precious jewels and specie with paper. A paper currency! Imagine how crazy that must have sounded!

Just as Marco Polo and other medieval travellers returned along the Silk Road breathless with astonishing tales of paper money and the end of commodity currencies, so modern commentators (e.g., me) came tumbling off of flights from Shanghai with equally astonishing tales of a land of mobile payments, where not only paper money but also payment cards are vanishing as consumers pay for everything with QR codes. That must have sounded pretty crazy in America too, or at least it did until PayPal announced they would be bringing mobile QR code payments to 8,000+ CVS stores.

China’s thinking has been evolving for some time. Back in 2016, the Governor of the People’s Bank of China (PBOC), Zhou Xiaochuan, set out the Bank’s thinking about digital currency, saying that it is an irresistible trend that paper money will be replaced by new products and new technologies. He went on to say that as a legal tender, digital currency should be controlled by the central bank and after noting that he thought it would take a decade or so for digital currency to completely replace cash in China, he went to state clearly that the bank was working out “how to gradually phase out paper money”. Rather than simply let the cashless society happen, which may not led to the optimum implementation for society, they were developing a plan for a cashless society.

But how will they do it? I got a window into the likely way forward when I listened to Kevin C. Desouza (Professor of Business, Technology and Strategy in the School of Management at the QUT Business School, a Nonresident Senior Fellow in the Governance Studies Program at the Brookings Institution and a Distinguished Research Fellow at the China Institute for Urban Governance at Shanghai Jiao Tong University). He is someone with a pretty informed perspective. I heard him in conversation with Bonnie S. Glaser (senior adviser for Asia and the director of the China Power Project at the Center for Strategic and International Studies, CSIS) on the ChinaPower PODCAST.

Kevin and Bonnie were discussing China’s plan to develop a Central Bank Digital Currency (CBDC). I have looked at China’s CBDC system (the Digital Currency/Electronic Payment, DC/EP) in some detail and have speculated on its impact myself, so naturally I wanted to double-check my views (coming from a more technological background) against Kevin and Bonnie’s informed strategic, foreign policy perspective.

One particularly interesting aspect of their discussion concerned China’s ability to advance in digital currency deployment and use because of the co-ordinated plans of the technology providers, the institutions and the state. The technological possibilities are a spectrum and there are a wide variety of business models and many institutional arrangements to investigate, balance and optimise. Hence it needs some co-ordination to make something happen. This is where China can bring co-ordinated and effective governance to bear.

This rationale is clear and, well, rational. The Chinese central bank wants the efficiencies that come from having a digital currency but also understands the implications of removing the privilege of money creation from the commercial banks. You can see why this is a potential problem for a digital currency created by the central bank, even if it is now technologically feasible for them to do so. If commercial banks lose both deposits and the privilege of creating money, then their functionality and role in the economy is much reduced. Whether you think that is a good idea or not, you must agreet it’s a big step to take.

This why I think that the PBOC position, reinforced in 2018 by Fan Yifei, Deputy Governor of the People’s Bank of China, that Chinese digital currency should adopt a “double-tier delivery system” which allows commercial banks to distribute digital currency under central bank control make sense. I don’t doubt that this will be the approach adopted by the Federal Reserve when the US eventually decides to issue a digital dollar, which is why we in the West should be studying it and learning from it. 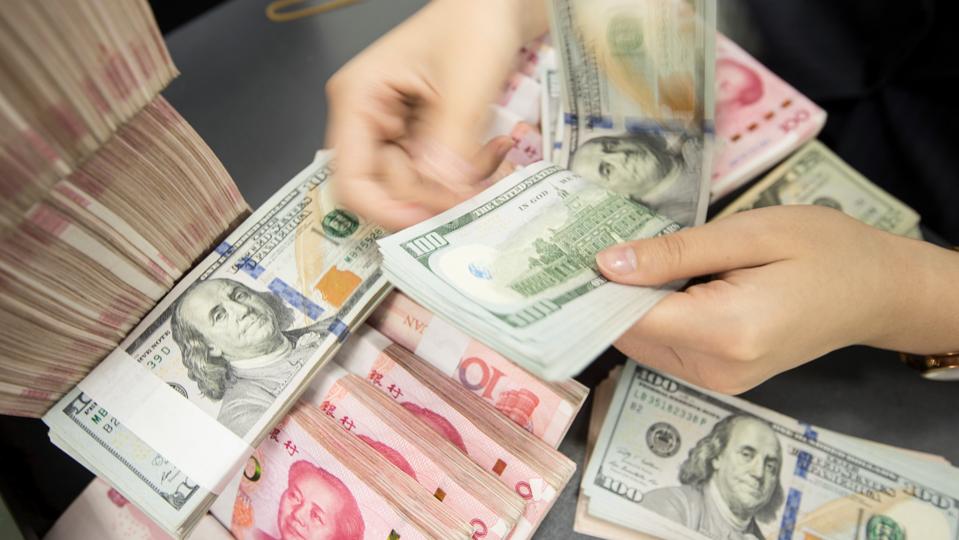 A Chinese bank employee counts 100-yuan notes and US dollar bills at a bank counter in Nantong in … [+] China’s eastern Jiangsu province on August 6, 2019 (Photo by STR/AFP via Getty Images).

I’m fascinated that China’s long experiment with atoms about atoms is almost over and will soon be replaced by bits about bits. This will come about not because of Bitcoin or Libra, Unionpay or PayPal, but because the PBOC has been strategic in its thinking and tactical in its governance. Their decisions on the topic for many years have been measured and consistent. Digital currency is coming, and China will take the lead in digital currency just as it did in paper currency.