Breaking
ESBC Major Updates: Tons Of Heavyweight Greats Added...
5 On-Demand Courses To Help Develop Your Leadership...
How to Run Nonprofit Marketing Ads
Entrepreneurs Are Bringing Transparency To Home Buying And...
Best Incentive To Get Vaccinated: Money, Messaging, Or...
Page Level Query Analysis at Scale with Google...
How A CIO Can Align IT With Business...
Blogger of the Month: Jo, Girl Eats World
6 Things Women In Business Know That Men...
How to Use First-Party Data for Ad Personalization
Pressing Reset—Putting A Fallen Unicorn Back On Its...
How We Went Viral: Promoting Content with Influencers,...
Blame Olympic Record Price Tag For Return To...
Apple iOS 14.5 Release: Should You Upgrade?
How to Come up with Podcast Topics and...
Why Gaming Gear Company Razer Launched A $50...
Home Technology The Happy Gun Owner? Research Suggests Otherwise
Technology 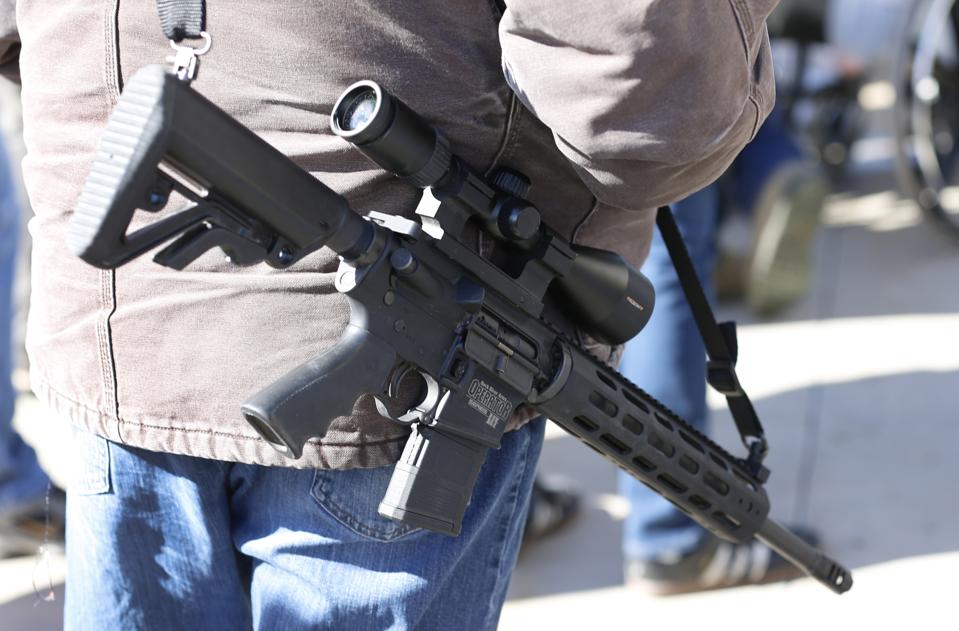 A man with his firearm listens to speakers at a protest to new gun legislation at the Utah State … [+] Capitol in Salt Lake City, Utah on February 8, 2020. – The protestors are opposing new gun legislation that they say will restrict their US second amendment rights. Utah is an open carry state. (Photo by GEORGE FREY / AFP) (Photo by GEORGE FREY/AFP via Getty Images)

We’ve often heard that having a gun in the house can make someone feel happier as a result of feelings safer and more content in the knowledge that one can protect themselves in their own home. However, it turns out, that might not be so true after all.

Researcher Terence Hill, an associate professor of sociology in the College of Social and Behavioral Sciences from the University of Arizona, recently found that despite claims, gun owners aren’t any measurably happier than those who don’t own guns. Similarly, explains Hill, even though gun owners and gun society at large have often claimed that their guns make them feel safe, secure and protected – all feelings that correlate positively with feelings of happiness – in the case of gun ownership, the correlation stops short. The study found instead that gun ownership was unrelated to feelings of happiness. “We want to understand gun owners’ subjective experiences,” Hill said. “We’re trying to understand when guns promote individual well-being, if at all, and that will add to the discussion of the role of guns in our society.”

In America’s strong gun culture, the study is helping researchers understand the relationship between gun ownership and personal well-being, which has been an area of study that has been severely lacking in recent years despite the ever increase swirl of debates in the US around gun ownership, and public safety and wellbeing. It was with special consideration to the rise in consumer products and advertising promising people better sleep and peace of mind that researchers conducted the study. “Whenever people start to promote a certain type of lifestyle – like a type of exercise or a diet – public health is there to test it,” Hill said. “We think if anybody makes a claim about how guns are good for people’s health and wellbeing, those claims should be formally tested with empirical data. We need to test those claims like we would test any dietary or exercise recommendation.”

In response to potential claims and concerns of partisan criticism, Hill is quick to note that, “It’s possible that an individual can be comforted by their weapon and that their weapon can make them happier and less afraid, but we’re finding that that’s not so common that it can be observable at a population level,” continuing that, “We’re not saying there’s anything wrong with guns. We’re just saying that they may not be benefiting people’s personal lives in the way some people claim.”

“We’re not saying there’s anything wrong with guns. We’re just saying that they may not be benefiting people’s personal lives in the way some people claim.”

Hill’s happiness study, published in the journal SSM – Population Health, is based on 27 years of data, collected between 1973 and 2018, from the National Opinion Research Center’s General Social Survey. Interestingly enough, the data initially seemed to support the assertion that gun ownership led to happiness. However, researchers soon found that if they adjusted the data to include someone’s marital status than the correlation disappeared. Gun owners were more likely to be married and researchers found that it was marriage, not gun ownership, that was driving happiness, a correlation that has long been found by public health researchers. Over and over again, as researchers found that when they adjusted their data for variables such as, age, race, religion and education, their analysis continues to find that gun owners and non-gun owners exhibited similar levels of happiness.

“Gun owners will often tell you that guns help them to feel safe, secure and protected. They will also tell you that guns empower them and make them feel independent and strong. They also talk about how just holding and handling guns is pleasurable,” Hill said. “If guns do make people feel safe, secure and protected, if they are empowering, if they are contributing to feelings of pleasure, then they should promote happiness, but we don’t find any evidence of that. That calls into question whether or not these are real feelings that gun owners have, or are they just part of the culture of owning a gun?”

The Hill postulates that, “Some people use guns to enhance a recreational lifestyle – for activities like target shooting – and this might promote happiness because it enhances a lifestyle,” continuing that, “Gun owners who identify as more liberal or democratic may be more likely to use guns for that reason as opposed to emphasising self defence. There is previous research that shows Democrats are less likely than Republicans to own a gun for protection.” Yet, the study also found that “among Democrats, the positive association between gun ownership and happiness is waning over time. With this trend in mind, we could expect some convergence with the null association between gun ownership and happiness observed for respondents who identified as Republicans and Independents.”

An indeed, when considering the wide spectrum of gun ownership, and the reasons behind it, one reason behind gun ownership can vary widely from another. One could postulate that gun owners whose drivers for gun ownership was personal safety and security are starkly different in than gun owners whose drivers were more along the lines of hunting, recreation, or even art. The mentality behind someone having a gun in their home to protect from intruders (thus having it loaded at all times) is starkly different from the mentality of someone collecting antique firearms that are not likely to be loaded in the home, and if they were would take a long time to load anyway, thus negating their usefulness in self defence. One mentality is feed in part by fear, the other, by personal interest and recreation.

Studies such as this are incredibly important to the national discussion on guns and firearms. With death by firearms being higher in the US than in any other developed country, the role of guns and gun ownership in the US is an ever important topic for discussion. Not only does this study fill a gap in knowledge for public health in the US, it helps shed light on the nuances behind gun ownership and perceived well being, and helps advance the conversation behind what improves public health with regard to the gun debate and what is just smoke and noise.

Who Wants A Marcus Checking Account? A Lot Of People According To One Survey