The Hottest Tickets At Sundance?Underwater VR And One-On-One Experiences

Need proof that the most exciting things in VR, AR, and immersive content are taking place at film festivals? Here’s a short lists of things I did at this year’s Sundance:

-Dove into an actual swimming pool with a snorkel and waterproof VR rig in order to simulate a trip to the moon. (Spaced Out, Lead Artist: Pyaré,)

-Danced with a VR scarecrow that was played by a live human actor in a mocap suit—and then used superpowers to protect him from demonic birds. (Scarecrow, Lead Artists: Jihyun Jung, Sngmoo Lee, Taewan Jeong, Cooper Yoo)

-Used a Magic Leap AR headset to see my breath (and the breath of those around me) come to life into tiny particles that we could interact with. (Breathe, Lead Artist: Diego Galafassi,)

-Walked through a physical set portraying a post-apocalyptic dreamscape, populated by a surreal patchwork of ghosts who came to life (via a Microsoft Hololens) as I stepped close to them. (Solastalgia, Lead Artists: Antoine Viviani, Pierre-Alain Giraud) 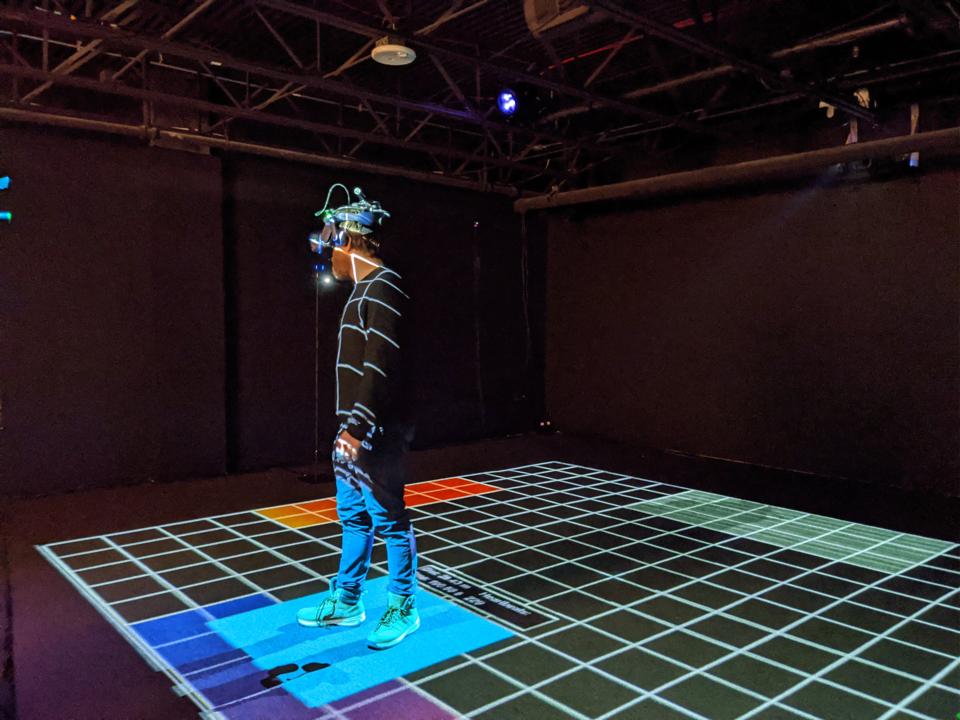 “Persuasion Machines” was one of many VR experiences at Sundance

As we become more used to VR as a platform—and products like the Oculus Quest make roomscale VR (meaning you can walk around a physical space and have your movements translate into the experience) accessible to the masses—its novelty fades. And with it, the innate ability for the technology to wow us just be existing. Just as we are no longer blown away by the very existence of a smartphone or electric car, VR now requires more of its creators to get that sought-after sense of wow.

Which brings us to this year’s crop of installations at Sundance’s New Frontier (where the festival shows off immersive content). Notice a trend? The most interesting stuff here isn’t just VR, or AR, or whatever-R—it’s productions that deftly mix the real with the virtual. That means multi-person social experiences, the use of live actors, and unique physical sensations that come from strange settings like an actual swimming pool. Quite simply, each of these experiences does something that even a seasoned VR user has likely never encountered before.

They also do something that is, by its very nature, exclusive. In the best of cases, VR is a low throughput technology. Hundreds of people can stare at the same movie screen at the same time. But with VR, one person can use one headset at a time. Add in site-specific physical installations and live actors, and we’re talking a truly minuscule number of end users here. That’s a challenge, but it’s also an opportunity. In an era of on-demand and streaming entertainment, this is the ultimate in appointment programming.

At Sundance, a spot in Scarecrow or Spaced Out was more sought after than any film premiere. Many people will read about these experiences in festival programs and writer recaps (such as this one), but vanishingly few will ever see them for themselves. As a result, the only way most people will experience these things is in their heads, where the combination of imagination and word of mouth can easily transform one into something approaching a myth.

And sometimes, such status is actually earned. Scarecrow, which was made by a team of Korean filmmakers and artists, was one of the most visceral digital experiences I’ve ever entered. You enter a cursed and perhaps post-apocalyptic fantasy world, with a lone scarecrow as your companion. But that scarecrow is no mere video game character. Rather, it’s a live dancer, who silently communicates to you through movement and magic. The room is erupts in fragrances as papers burn and flowers bloom. When he touches you, all you feel is straw. The experience is special, ephemeral, and unique. It’s a dance-driven social encounter, and no two people will experience it the same way. It’s easy to imagine some users standing there, cemented still by decades of expectation that electronic entertainment happens to us, rather than with us. But for those willing to take a chance (and perhaps look a bit silly) with their own sashays and struts, it’s a truly moving and special experience.

Spaced Out uses the floating sensation of a swimming pool to simulate the feeling of floating through space. The visuals are an abstract and trippy kaleidoscope of colors (think: the end of 2001: A Spacey Odyssey), but audio from the Apollo 11 mission gives you a sense of story and place. Experiencing it reminded me of the first time I ever strapped on a VR headset and felt like I was experiencing something new and different. It also could be the beginning of something big: I can legitimately see underwater VR—and its accompanying feeling of weightlessness—being used for location-specific VR installations such as those produced by The Void. Or perhaps James Cameron wants to use it to produce a VR version of The Abyss?

So yeah, we’ve been promised for years that VR would be the future of entertainment. And while some of these promises never really came to be, we’ve entered a phase where VR truly has come into its own not as the future, but as a piece of a larger puzzle. VR, quite simply, works best when it’s combined with other media, site-specific installations, or the sense of social camaraderie that can only come from the presence of another real, live human. The mix of these other elements doesn’t just make VR more interesting, and entertaining, it also helps to overcome perhaps its biggest shortcoming: Its innate sense of isolation. Walking out of Scarecrow, I felt like I shared a real experience with a real person. An experience made all the more powerful (and even beautiful) by the realization that, as that other person came from Korea, we likely couldn’t even speak the same language.

Casino Operator Wynn Resorts Is Losing Up To $2.6 Million Per Day From Coronavirus Shutdown