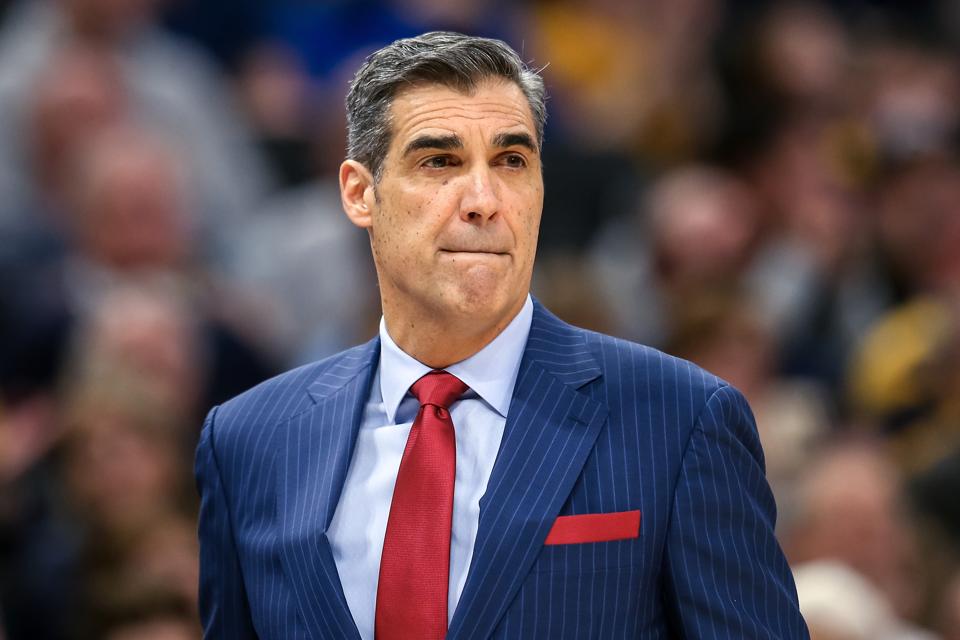 MILWAUKEE, WISCONSIN – JANUARY 04: Head coach Jay Wright of the Villanova Wildcats looks on in the … [+] first half against the Marquette Golden Eagles at the Fiserv Forum on January 04, 2020 in Milwaukee, Wisconsin. (Photo by Dylan Buell/Getty Images)

League sources say Villanova coach Jay Wright could become the next head coach of the Knicks.

“There is a strong possibility that Jay Wright in New York could happen,” one league source said.

With his Hall of Fame coaching résumé, charismatic personality and easygoing manner with fans and the press, Wright has always seemed like a potential strong fit for the bright lights of Madison Square Garden.

Reached by text Sunday, Wright did not offer a comment on the matter, while a Villanova spokesman said the school does not comment on speculative reports.

The Knicks were linked to Wright, 58, just two years ago after Jeff Hornacek was fired, but he ultimately passed to remain at Villanova.

“I love my job,” added Wright. “You would love that opportunity, that challenge, especially in New York, especially the Knicks, but you have to leave your job, and I love my job.”

The Knicks are expected to replace interim coach Mike Miller in the offseason, but they are not expected to make that change until new president Leon Rose officially takes over. Rose is still in the process of separating himself from his obligations as an agent with CAA, a process that could take “several months,” as I reported last week.

Jeff Van Gundy, Mark Jackson, Tom Thibodeau and Becky Hammon are among the other high-profile names linked to the Knicks job. 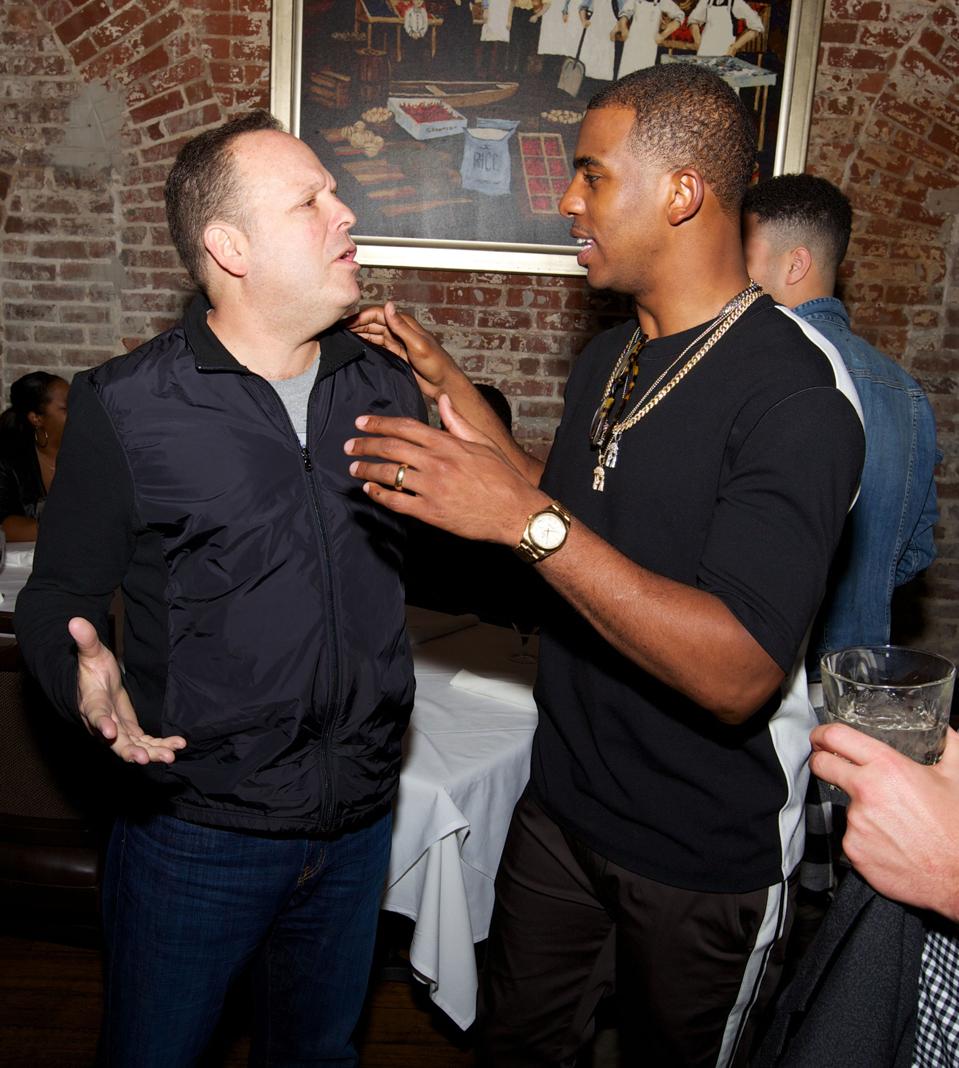 Wright is from the Philadelphia area and has ties with South Jersey guys Rose and William “Worldwide Wes” Wesley, who is expected to play more of an advisory role vis-a-vis Rose and the Knicks.

Wright and Villanova heavily recruited Michael Kidd-Gilchrist, the Camden, N.J. native whom Wesley calls a “nephew” and who is now one of many high-profile Rose clients. Kidd-Gilchrist ultimately chose Kentucky over Villanova and is now with the Dallas Mavericks.

Wright has been courted by the NBA (and other schools) for years, but has always opted to remain at Villanova, where he has won two of the last four NCAA championships, been to three Final Fours and twice been named the Naismith Coach of the Year.

In recent years, Wright has also coached up a pipeline of NBA and NBA G League players, including Phil Booth, Jalen Brunson, Kris Jenkins and Eric Paschall, all of whom supported Wright and the Wildcats on Sunday in their 76-56 rout of Big 5 rival Temple.

The Knicks (17-38) are now armed with two first-round picks in 2020 and a total of seven across the next four years. Current Villanova sophomore forward Saddiq Bey is now trending as a projected first-round pick this year, while freshman forward Jeremiah Robinson-Earl is a projected top pick in 2021.

Wright’s current team is younger than previous years, but Brunson, a two-time national champion at Villanova, said on SiriusXM radio during the Temple game that Wright “loves” the challenge of coaching younger players.

“Younger guys, there’s going to be a lot more mistakes so coach has to be a little more patient, but he loves it,” Brunson said.

Wright has said he’s “intrigued” by coaching in the NBA, but also that he loves his job at Villanova and doesn’t want to leave.

“The NBA does intrigue me,” he told The Athletic in 2018. “The challenge is appealing, but it’s not worth giving up working with these guys. The whole thing is, to take a new challenge you have to give up what you have. I don’t want to give up what I have. Would I like to coach in the NBA? Yes. But I have to give this up in order to do that, and I don’t see that happening.”

Last year, UCLA reportedly offered to double Wright’s salary of nearly $4 million annually if he came out West, but he never seriously considered it and the school hired Mick Cronin instead.

UCLA also reached out to Calipari, another pal of Rose’s who this month said he would help Rose in any way he could with the Knicks short of becoming the head coach. 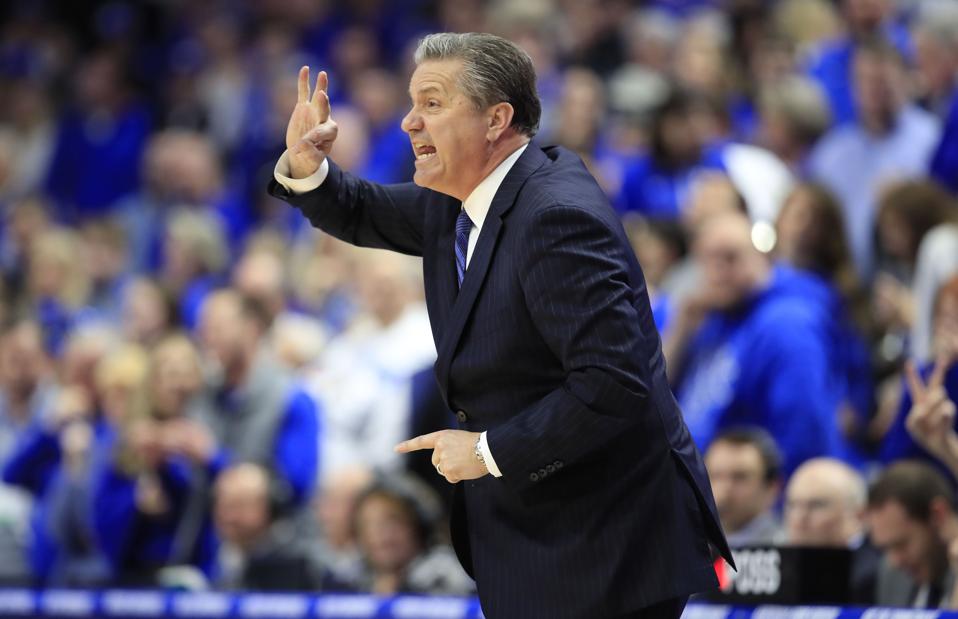 LEXINGTON, KENTUCKY – FEBRUARY 15: John Calipari the head coach of the Kentucky Wildcats gives … [+] instructions to his team against the Ole Miss Rebels at Rupp Arena on February 15, 2020 in Lexington, Kentucky. (Photo by Andy Lyons/Getty Images)

Former Knicks coach David Fizdale had a four-year, $22-million deal, so Wright could expect to command significantly more than his reported annual salary of $3.9 million should he jump to the Knicks.

Still, the list of college coaches who failed trying to make the jump to the NBA seems to grow every year.

ESPN is now reporting that the Cleveland Cavaliers may part ways with former Michigan coach John Beilein in the coming days after his tenure has been widely regarded as a failure. The Cavaliers (14-40) own the second-worst record in the NBA and Beilein has had a tough time making the transition to coaching college players.

Fred Hoiberg went 115-155 in three-plus seasons with the Chicago Bulls before returning to the college ranks with Nebraska.

In past decades, Calipari struggled with the New Jersey Nets before returning to college, while Rick Pitino’s tenure with the Boston Celtics ended in failure after he was previously successful with the Knicks.

So there is plenty of history to suggest that Wright might be better off staying at Villanova, where he’s a proven winner and contender every year in the Big East Conference.

Then again, one of these years he could make the jump.

“He’s always mentioned,” one prominent NBA agent said. “One of these years it will happen.”

Top 20 Entrepreneurs Give 20 Tips To Get To 7 Figures

Governors Call For $500 Billion To States Even...

Alibaba, Amazon, And The Oscars Ensure This Woman’s...

How Mobile Has Impacted the Customer Journey