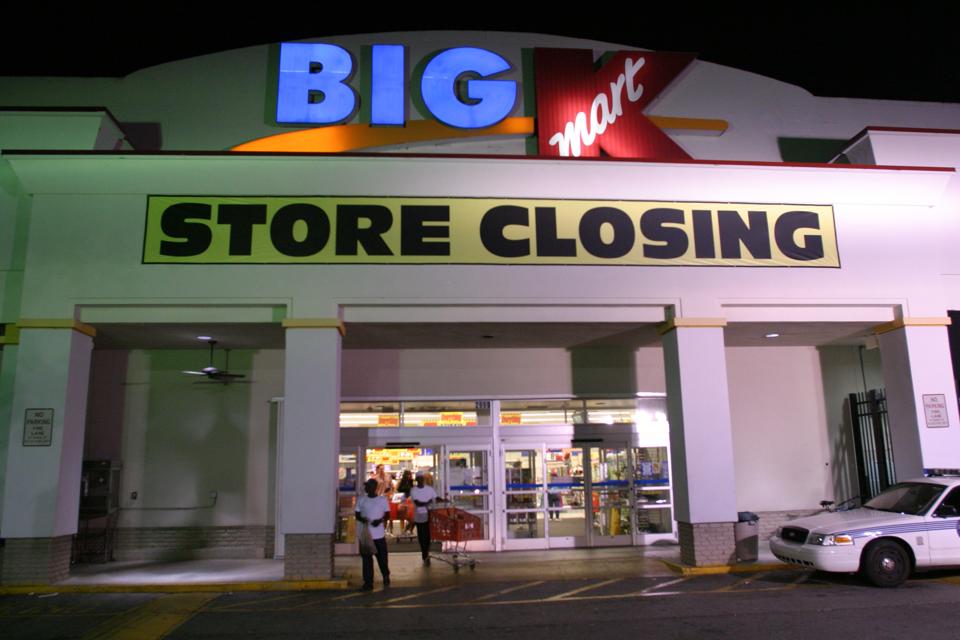 It was once a big deal – a Very Big Deal.

But soon it will be just a memory.

Kmart’s store on West 34th Street in Midtown Manhattan, catty-corner to Macy’s and considered one of the anchors of both the Herald Square shopping district and Kmart itself – is going out of business.

Last week the landmark store at One Penn Plaza just west of Seventh Avenue put up its “Store Closing Sale” signs, only the latest Kmart store to succumb to what retail observers have only partially sarcastically referred to as “the longest going-out-of-business sale in American retailing history.”

The 34th Street Kmart is part of the most recent round of store closings from parent company Transformco, which is unaffectionally known as New Sears within the trade…even though it is generally behaving very much like the Old Sears. No wonder, both were/are controlled by Eddie Lampert, the investor once seen as the savior of two great retailing brands – Kmart and Sears – but now generally regarding as their undertaker.

Where there once more than 3,500 stores between the two brands there are expected to be just 182 units left – at least, given recent history, until the next shutdowns are announced. This current round of closings includes 51 Sears and 45 Kmart stores. The company said it expected to wrap up these closings by mid-February but USA Today reports it has found liquidation sales continuing through March and April “at dozens of stores throughout the nation.” Transformco declined to comment on the USA Today story, the newspaper said.

Exactly when the 34th Street store shuts down completely is unknown but it certainly is an inglorious end to what was once such an important – dare we say revolutionary – store. Opened in 1995. Kmart then still had 2,400 stores and, while no longer the largest retailer in the country (having ceded that title to Walmart a few years earlier) it was still a retailing powerhouse.

Opening a store in Manhattan, considered a no-man’s-land for big box retailers, was still a new concept, even though some larger chains like Bradlees and Bed Bath & Beyond did have locations in the borough.

The four-level store was carved out of street level retail and below-ground space in the office tower and featured direct access from adjacent Penn Station and the hundreds of thousands of commuters and travelers who used the transportation hub. As prime a location as it was, it was also, to say the least, an awkward space, with a disorienting layout, dead-end aisles and low ceilings in its three basement levels.

But at 143,000 square feet it was the largest Kmart in the chain, save for a slightly larger unit in Anchorage, Alaska. What’s more it represented a radical new concept in retailing, that national chains could do business in a marketplace that had been very much defined by local players.

“Today we are celebrating a true ‘Miracle on 34th Street,’” it was reported then-chairman Joe Antonini said at the time. “And this miracle is called Manhattan’s first Kmart.” Antonini had led Kmart to perhaps its most glorious era, with what was considered the channel’s most fashion-forward apparel assortment as well as the Martha Stewart private label home program which did nearly $1 billion at retail at its peak, a mark not matched by any mass merchant until only recently.

What’s more, it positioned Kmart as a retail pioneer as it would be decades before Target, Costco and a few others moved into Manhattan and even today, there are no Walmarts or Kohl’s there. Nordstrom only opened its first Manhattan store three months ago.

There remains one Kmart left in Manhattan, located downtown in Greenwich Village, a store that opened a few years after the 34th Street location. While it has not showed up on any closings lists, its long-term future is questionable at best.

But when the 34th Street store shuts down for good sometime in the next month or two, it will mark the end of an era for both the company and Herald Square as a shopping district. In a 1995 report announcing its forthcoming opening, the Chicago Tribune describes Kmart’s future neighbors along 34th Street as including Toys’R’Us, Daffy’s, Conway and A&S. All of them, plus so many, many more are gone now.

As will be Kmart.

Convince Your Boss to Send You to MozCon...

The Clippers Found A New Playmaker In January...

The 7 Steps to Keyword Research