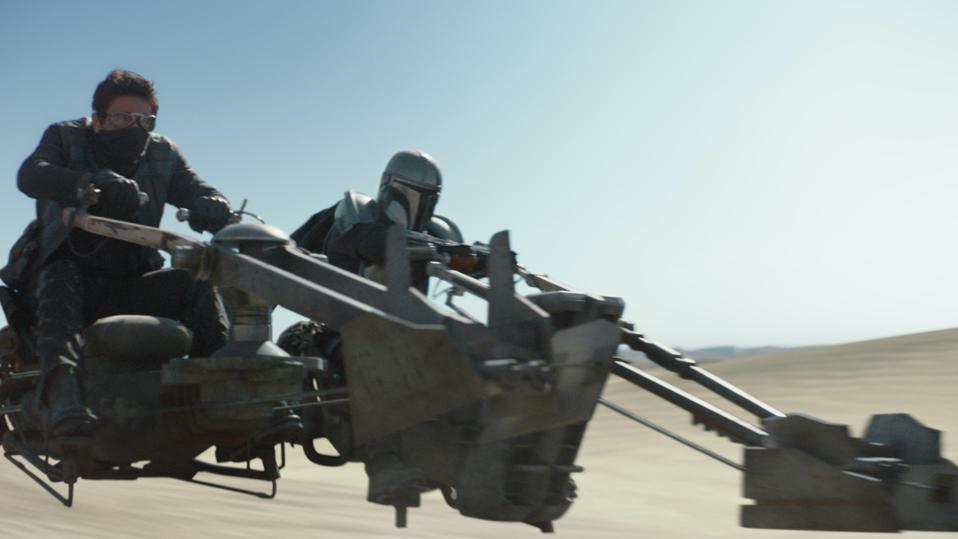 In Chapter 5 of ‘The Mandalorian’ our heroes travel to a familiar ‘Star Wars’ planet and lots of fun … [+] fan-service ensues in yet another incredible episode.

The cantina from the very first Star Wars movie, Episode IV: A New Hope, is under new management.

Long ago, when Luke Skywalker, Obi-Wan Kenobi, C-3PO and R2-D2 walked into the cantina in Mos Eisley, the bartender hollered at the droids that their kind wasn’t welcome here. They were forced to wait outside while Luke and Obi-Wan tended to business.

Well times have changed, much to Mando’s chagrin. He’s not a fan of droids, but look who’s running things in the Mos Eisley cantina now: 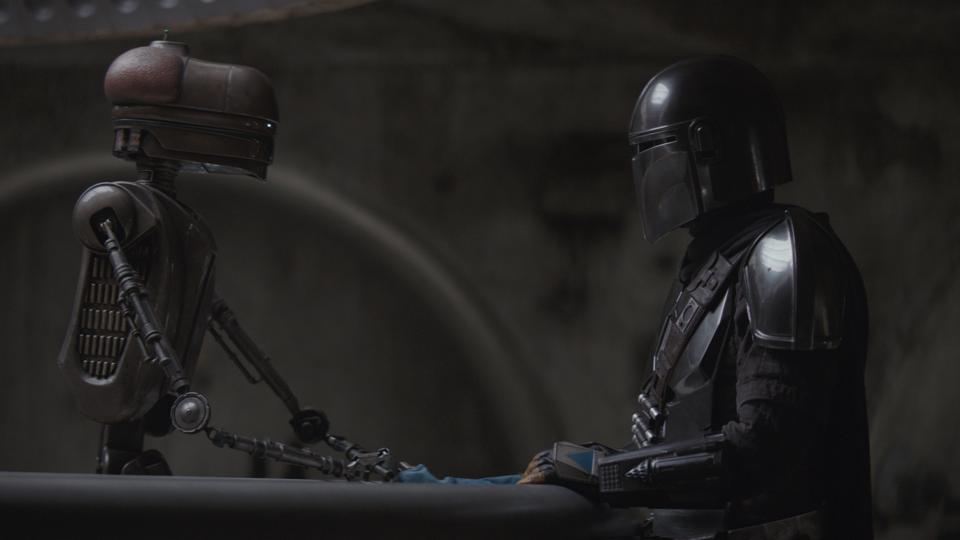 The Mandalorian in Mos Eisley Cantina

That’s a familiar-looking tin can. We’ve seen him before . . . 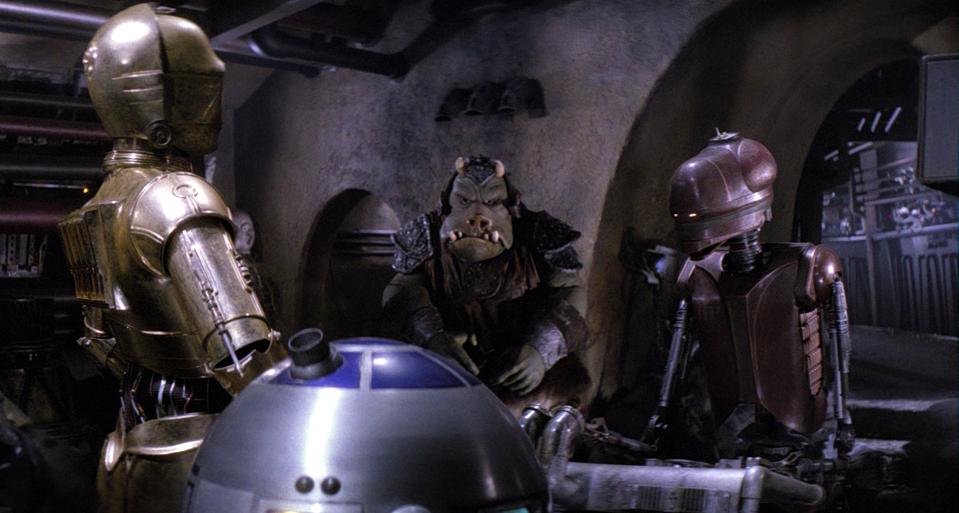 I guess he needed work after Jabba had an unfortunate accident with a princess.

This is just one of the many great bits of Star Wars fan-service that make up Chapter 5, ‘The Gunslinger.’ Some might think it’s too much fan-service, but I think it’s wonderful and I’m glad to see this show do so much in this regard, truly harnessing and anchoring us to the Star Wars universe and original trilogy without ever having to rehash old storylines (as in, we don’t have yet another damn Death Star).

The speeder bikes in the header image for this post are another bit of fan-service. They’re not identical to the ones from Return Of The Jedi’s Endor segment, but they’re pretty close. But really, just being back on Tatooine for the first time in 36 years is so great. The last time we were on Luke’s old planet (at least on the screen) was in the Jabba the Hutt segment in RotJ. That’s forever ago, and even though business seems slow at the cantina under new management, it’s good to be back.

Mando has just landed after a scrape with another bounty hunter in space. The hunter seems to have him dead to rights and says “I can bring you in warm or I can bring you in cold,” which pisses Mando off, so he does a tricky maneuver and blasts the other guy to kingdom come. “That’s my line,” he says.

He made it out alive, but the ship is leaking fuel and needs work ASAP—at one point Mando powers down and the Kid laughs in this really adorable baby way, clearly unaware of the precariousness of their situation—so Mando heads to the nearest planet. A desert planet. The voice on the radio identifies itself as Mos Eisley tower, and that’s when you know they’re in Tatooine.

Mando lands and immediately three mechanic droids rush over to start servicing his ship. Naturally, he shoots at their feet, causing them to scuttle away in fear.

The exchange anger’s the resident mechanic, who comes out shouting at Mando not to hurt her droids, and then admonishes him for the state of his ship. This is Peli Motto (Amy Sedaris) and she’s great. 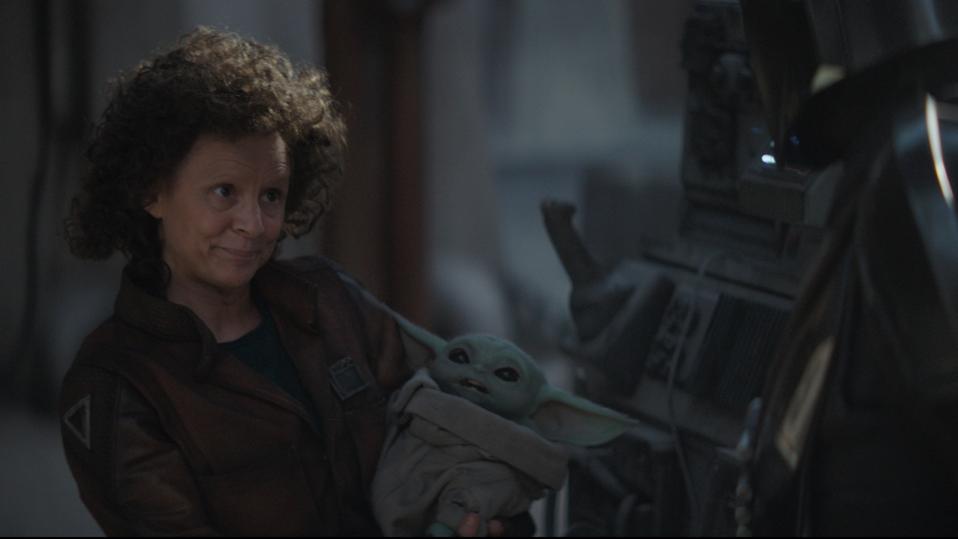 After Mando and Peli reach some kind of deal on ship repairs, he takes off, leaving a sleeping baby Yoda on the ship. When the Kid gets up, Peli at first thinks it’s something dangerous on board, but when she realizes it’s just a baby she scoops him up in her arms. She’ll watch the Kid while Mando is away, and charge him extra for it.

In the cantina, Mando looks for work but the droid at the bar tells him there’s none to be found. No guild work and nothing off the books either. Fortunately for Mando, he’s not the only non-guild bounty hunter in the bar.

This is Toro Calican (Jake Cannavale) and he’s sitting in the same table where Han Solo shot and killed Greedo. (We won’t get into who shot first). 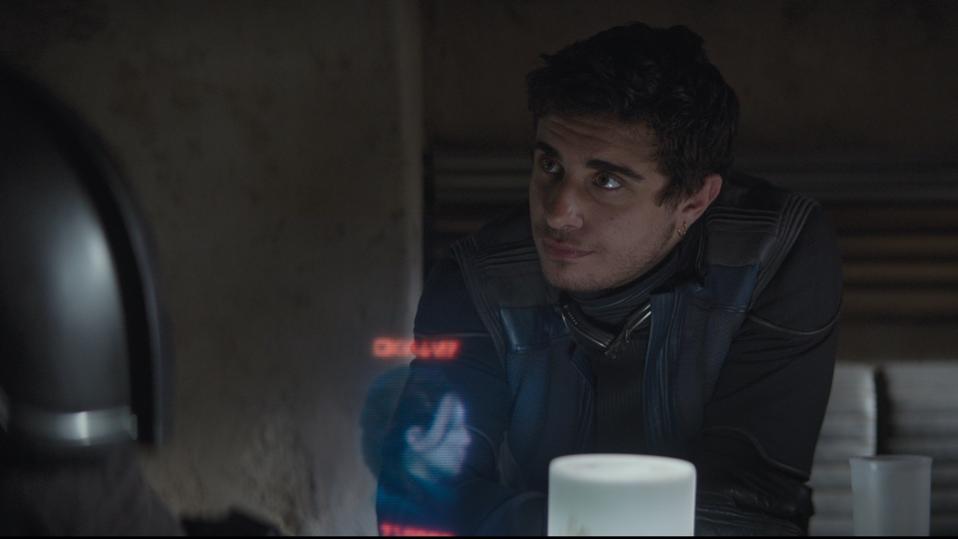 Toro tells Mando he has a valuable bounty that he’s willing to share for some help. He’s looking for Fennec Shand (Ming-Na Wen) an assassin who was employed by both crime syndicates (including the Hutts) and the Empire.

It turns out, Toro isn’t yet a member of the bounty hunter’s guild, and this bounty will be his ticket in. Mando can have all the money. Toro is just looking for a way into the guild. Mando is hesitant even still. Fennec is not someone you trifle with. She’s a hardened killer and even more deadly backed into a corner.

But he needs the money, so he tells Toro to get two speeder bikes and meet him in thirty minutes back at the shop.

Mando heads back and finds Peli holding the Kid. They’re both asleep and Mando, in his panic at seeing the Kid’s bed empty, wakes them both with his hollering. She explains that he can’t just leave a baby alone like that and that she’s been watching him out of the goodness of her heart. 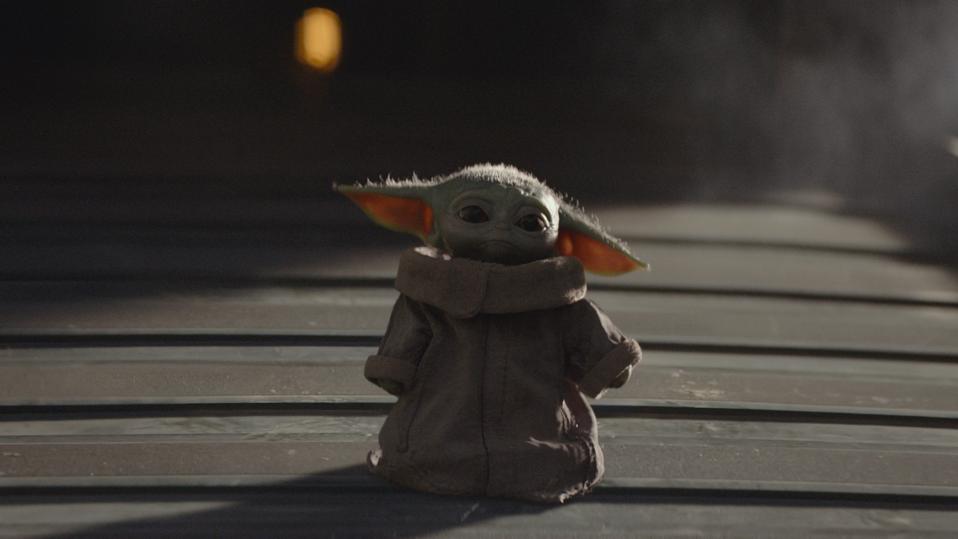 They both go outside where Toro is waiting with the speeder bikes, and the young bounty hunter in-training glimpses the Kid. He doesn’t think anything of it, but that moment plays a critical role later in the episode.

Off they go into the desert, speeding over the dunes and having what looks to be a lot of fun. I mean, I’d ride hovering speeder bikes over sand dunes any day.

They find another bounty hunter being dragged behind a large dewback, dead as a doornail. That’s when Fennec starts shooting, firing her sniper rifle from a distant ridge. Mando only makes it to safety thanks to that good old beskar steel.

They wait until night to take her on, relying on flash-flares to blind her as they speed across the sand. It’s a good plan, and it almost works, but Mando’s speeder is taken out and then he’s hit full-square in the chest. Saved by the beskar again. Still, if Toro hadn’t been able to sneak up behind Fennec, she would have taken him out with her next shot.

A fight ensues and Fennec very nearly gets the better of Toro. He’s bigger than her, but she’s the better fighter. Mando shows up just in time and it’s all over. Fennec is cuffed and they head back to the one functioning speeder bike. 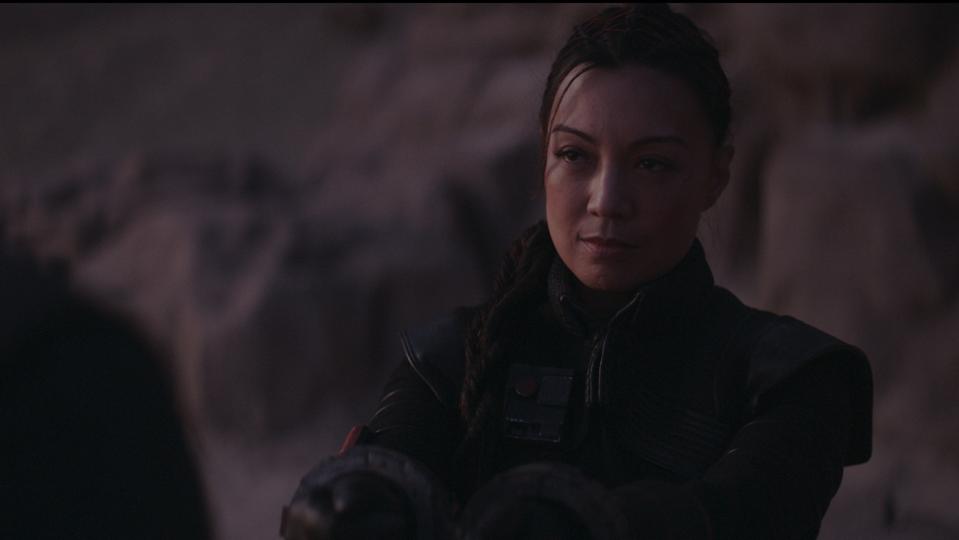 Mando wants Toro to go find the dewback so they can all have a ride, but Toro doesn’t trust leaving him alone with their quarry, so Mando heads off on foot. While he’s gone, Fennec tries to turn Toro against him. She tells him about the scuffle on Nevarro and the rogue Mandalorian who made off with the asset. She tells him the asset was a kid, and that’s when he knows she’s telling the truth.

Fennec wants Toro to free her. They can work together to take out the Mandalorian, she says. And he seems to agree, walking up slowly to her to take off her cuffs. Then he shoots her in the stomach. He tells her she’s right—bringing in Mando will be the bigger prize, more glory. But letting her go would be the death of him. And in any case, he doesn’t really need her anymore. I guess there’s truly no honor among thieves, bounty hunters and assassins.

Mando returns to Peli’s shop where, unsurprisingly enough, Toro has both her and the Child held hostage. Toro tells him to drop the gun, which he does, and then has him put his hands behind his back. He orders Peli to go cuff him, and she sees that he’s holding one of the flash-flares he used on Fennec earlier. “You’re smarter than you look,” she whispers.

Mando tosses the flare, grabs his blaster and flanks Toro. By the time the young bounty hunter realizes his mistake, it’s too late. Mando shoots first and Toro is no more. There’s a brief moment of worry when baby Yoda is nowhere to be found, but then he emerges from behind some crates without a scratch. Peli picks him up and tells him that she knows all those loud noises are hard on his big ears.

Mando didn’t get paid for Fennec, but he manages to get Toro’s credits and, I assume, whatever the other unnamed bounty hunter had on him. He pays Peli handsomely and off they go.

There’s a final shot of some mysterious person approaching Fennec’s body and kneeling down beside her, but we don’t see who it is or what happens next. The credits role and we’re left to wonder until next Friday.

(Side-note: Episode 6 airs next Friday, the 13th—Friday the 13th!—but Episode 7 airs the following Wednesday. That’s important because it means it comes out very purposefully ahead of the release of Star Wars: Rise Of Skywalker. Pretty curious to see how the film and TV show are tied together, even if it’s in a subtle way.

I read some absolute garbage about baby Yoda being “able to defeat Palpatine” which is just the most egregious nonsense. Baby Yoda is fifty years old right now. He wouldn’t be even twice that age by the time we meet Rey and Finn since that timeline is just one generation later. In other words, the Child will almost certainly still be a child in thirty or forty years, though maybe like a four or five-year-old.)

Another fun episode of The Mandalorian with that perfect mix of humor, action and Star Wars goodies. Pedro Pascal continues to impress with his ability to convey so much using so little. He really has the gunslinger role down, and plays the loner silent type so well.

I loved all the fan-service and the return to one of the most important fictional planets ever created. We even got to see Tuskan raiders—without it turning into a fight.

When Mando and Toro are speeding through the desert they spot some Tuskan raiders near some banthas. Toro scouts them through his monocular, talking about how the locals scorn the Tuskan people. Mando points out that the Tuskans consider themselves the only real locals. We continue with the Western theme in this regard, with Tuskans playing the part of the Native American and Mando as the sympathetic gunslinger.

Then suddenly two of them are right behind Toro, seemingly out of nowhere. 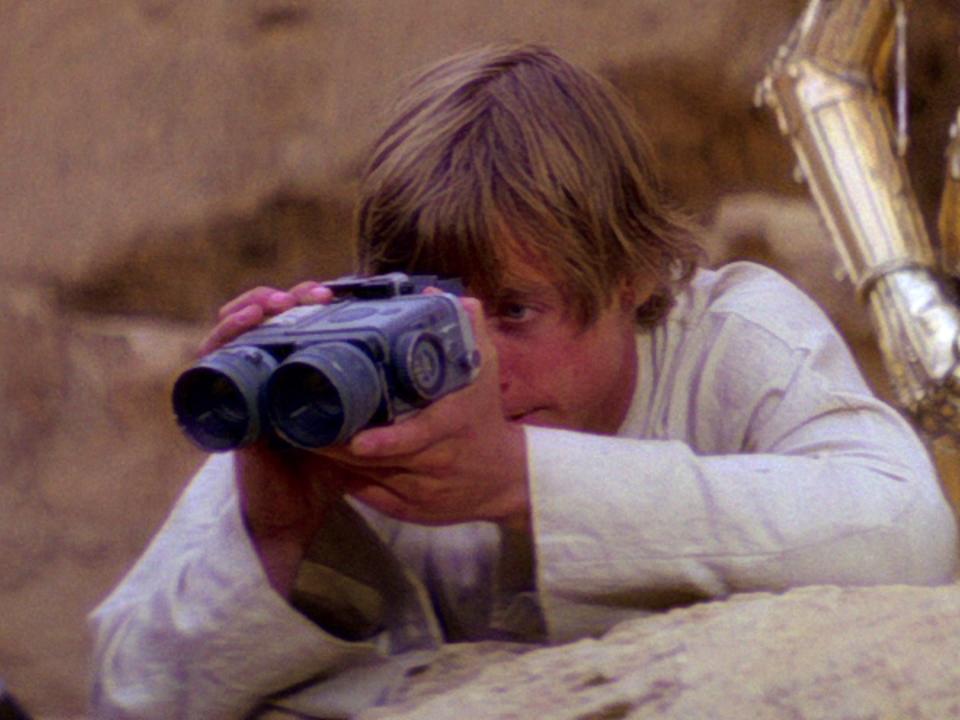 Luke about to get smacked over the head.

It’s a hilarious nod nod to Luke’s own first encounter with the sand people. He’s using macrobinoculars when they show up out of the blue behind him. But instead of fighting—no droids were harmed, no young men brained—the encounter is a peaceful one.

Mando negotiates with them using their sign language, and ends up buying safe passage for the low cost of Toro’s monocular.

In any case, it’s moments like these that make this show so great. I loved every minute of ‘The Gunslinger’ and I can’t wait for the final three episodes. I just wish we had more to look forward to. Three more (rather short) episodes is just not enough!

So who do you think the mysterious person is at the end of this episode? Let me know on Twitter or Facebook.