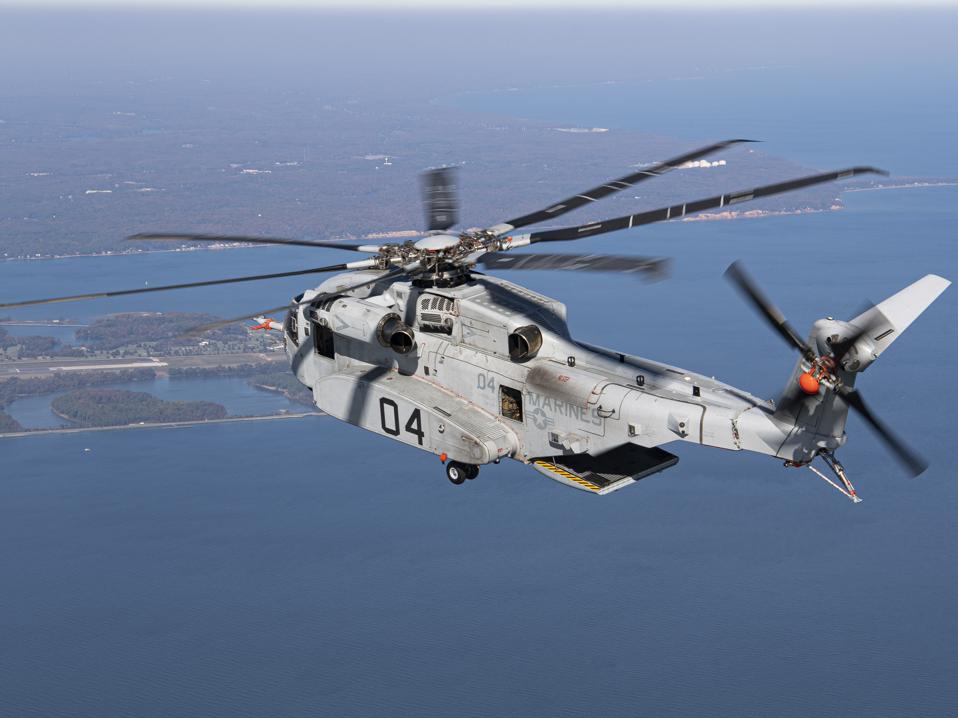 A Sikorsky CH-53K King Stallion with its rear cargo ramp cracked open in its natural environment … [+] between water and land.

The latest cars are crammed full of technology meant to make driving easier. Things like stability control, lane departure correction, and automatic distance following can be found on everything from a Toyota Prius to a Porsche Panamera. When the Sikorsky CH-53K King Stallion debuts in service with the Marine Corps in 2023, its fly-by-wire flight control system will have similar features. You could call them “driver assistance.”

The King Stallion is the Marines’ heavy-lift cargo helicopter replacement for the Sikorsky CH-53E Super Stallion. Meant to carry equipment and up to 55 troops internally over long ranges, the Super Stallion can also lift armored vehicles and even other aircraft externally. CH-53Es have also been operated by Navy in the minesweeping role and by the Air Force for special operations missions.

The CH-53K is essentially a redesign of the CH-53E. With three 7,500 shp General Electric GE38-1B turboshaft engines providing power to its seven-blade composite main rotor, the King Stallion is the most powerful helicopter ever flown by the U.S. military. It’s capable of lifting 27,000 pounds, triple the weight that a CH-53E can take aloft.

While its mission tasking will be similar to the Super Stallion – hauling big things over long distances – the CH-53K will offer more assistance to its pilots with a selectable flight control system (FCS).

Sikorsky’s John Rucci is a Senior Experimental Test Pilot for the CH-53K. A former Marine and Super Stallion pilot, he knows the demands of flying the biggest helicopter in America’s military inventory operationally. It requires significant attention, coordination between pilot and co-pilot, and a good deal of hands-on control.

Relieving CH-53K flight crews of some of that work, so that they can focus on other things like picking up loads or landing on ships, is one of the prime directives for its fly-by-wire FCS. It does this by taking information from the main rotor, tail rotor, engines, altitude, airspeed and other sensors to help a pilot command an action with less physical input in progressively more automated flight modes.

The first of these, the basic Primary Flight Control System (PFCS) mode, essentially leaves all control in the pilot’s hands. It’s like turning off all the driver assistance systems in you car. It’s just you at the wheel, or in this case at the cyclic (roll, pitch) and collective (power, climb) controls, free to drive without interference.

“You’re kind of limitless. You can barrel roll the aircraft if you want, not that they’ll be doing that,” Rucci says.

PFCS is ideal for dynamic flying where the pilot wants the quickest control responses and the most freedom to yank and bank the King Stallion as needed. A good example would be flying fast at very low level, following the terrain to avoid detection. Or flying through high mountain passes which require agility. 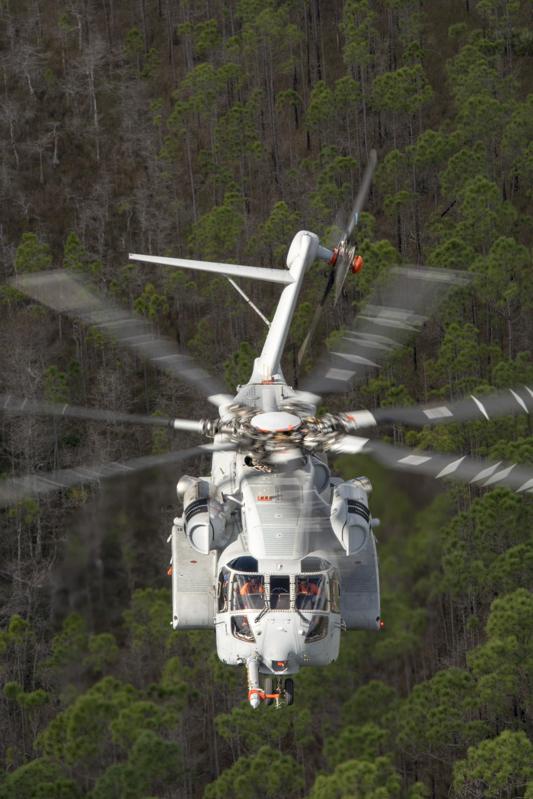 The second mode is called Automatic Flight Control System (AFCS). It’s akin to having the traction control or stability control systems enabled in your car. AFCS slows the CH-53K’s control responses a bit and will hold attitude and airspeed for the pilot. It’s ideal for cargo-carrying transits where the flight crew wants to make fewer inputs and just cruise. The AFCS mode also keeps the big chopper in generally level flight within specified pitch and roll limits.

“AFCS has a has a more damped, truck like response,” Rucci adds. “It’s the preferred mode if you’re flying with a heavy external load.”

The third and most automated mode is the Position Hover Hold (PHH) mode. It’s like automated braking or distance-following in a car where the driver need not touch the brakes or accelerator when moving slowly in traffic. PHH will automatically transition the King Stallion from forward flight to a hover with the press of a button.

The FCS software calculates required engine power, main/tail rotor control and a desired rate of descent for transition to a hover. It can also hold a hover without pilot input, even staying over the same spot with cues from the helo’s onboard GPS.

It’s a “translational rate command system,” Rucci explains. Should the pilot need to step in to correct a descent rate or adjust the hover, PHH translates his intent from a little pressure on the cyclic or collective. The control response is deliberately slow and damped, highly suited to low light conditions (night, fog, dust clouds), bad weather or other scenarios in which the flight crew has few visual cues. 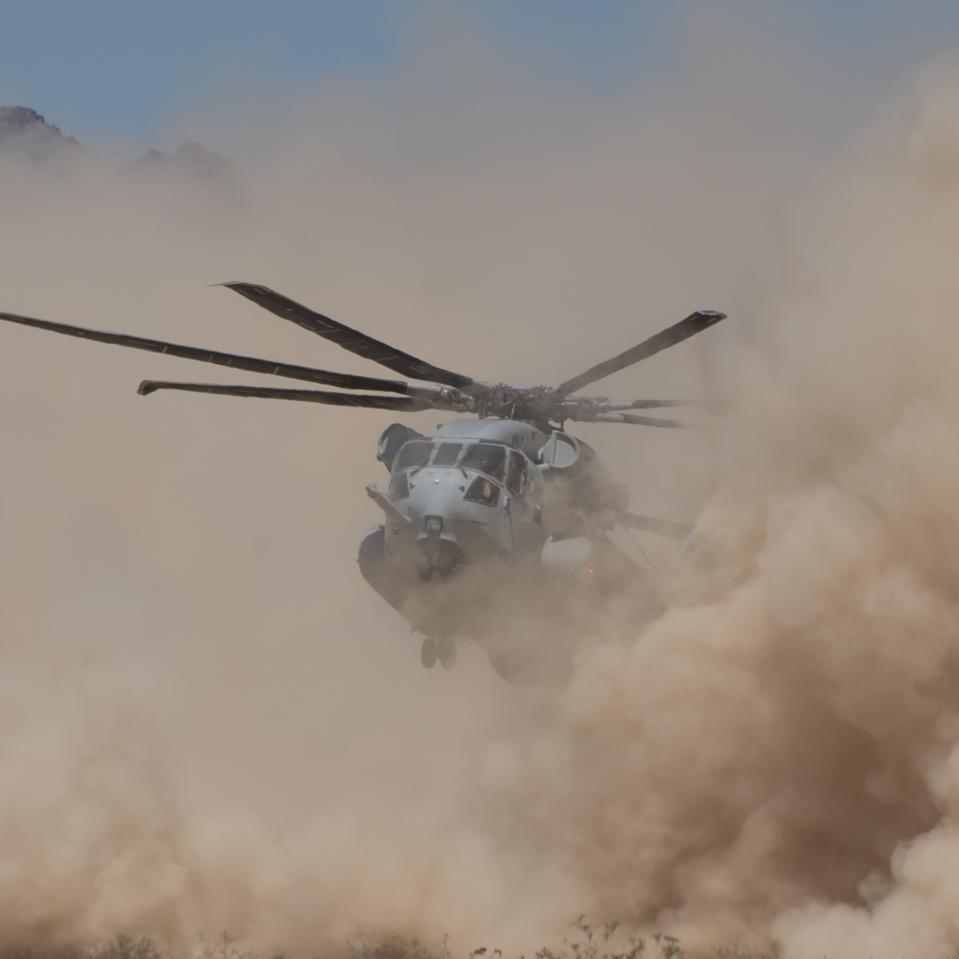 A King Stallion descends to hover over a dusty LZ during degraded visual environment testing near … [+] Marine Corps Air Station Yuma, AZ. John Rucci and a USMC pilot were in the cockpit.

“Let’s say the crew chief’s telling you that the load you need to pick up is 20 feet to the right,” Rucci says. “You can just move the stick out of its [center] detent position to the right and the helicopter will just slide right in a nice slow, predictable fashion. When you let go of the stick and it goes back to its detent, the helicopter goes back into a nice rock solid hover in the new position.”

Up Shifting and Down Shifting

Changing between the three flight modes is not unlike using steering wheel-mounted paddle shifters to up shift and down shift your car transmission. Instead of paddles, the CH-53K has thumb and pinkie finger buttons on either side of the cyclic.

As you grip the cyclic – a sidestick by the pilot’s forearm – there’s a five-way controller button under your thumb. You can move it forward/aft and side to side to make finite control adjustments. A fifth motion, pressing down or “plunging” the button actuates the next mode up.

Say you’re climbing away from fast, dynamic low level flight. You plunge the button with your thumb and the aircraft changes to AFCS mode. The change is reflected on the primary flight display screen in front of the pilot. Should the pilot then descend and want to hover, another press of the controller button will put the King Stallion into PHH mode.

“You’ve plunged the controller and the helicopter is now going decelerate to hover. The aircraft will decelerate from, say, 50 knots, at a programmed rate similar to how a pilot would do it.”

The pilot cycles back down through the modes by pressing a button on the opposite side of the cyclic with his pinkie finger.

“We call it up-shifting and down-shifting. You up-shift for more stability and control augmentation and you down-shift for more agility, less [control] augmentation,” Rucci explains. “New pilots get in [the 53K] and learn the modes. Then their thumbs and pinkies are just flying away as they up-shift or down-shift, sometimes in the middle of a maneuver.”

Pilots can override the different modes and take back full control at any time. The automation is there to increase their ability to look out the window, better maintaining awareness of their situation whether in training or combat.

A long list of such advanced systems on the CH-53K not only make it more effective than its predecessor but also more expensive. At a reported $138.5 million a piece, the King Stallion will be the most costly aircraft the U.S. military flies, including the F-35.

As with cars, you pay a premium for driver assistance.

How Major League Baseball Lost The Heart Of Baseball