The “Megxit” Fallout, Day 2: Harry Called On The Carpet, Courtiers Burn The Midnight Oil, And Meghan Markle Jets Out Of Britain 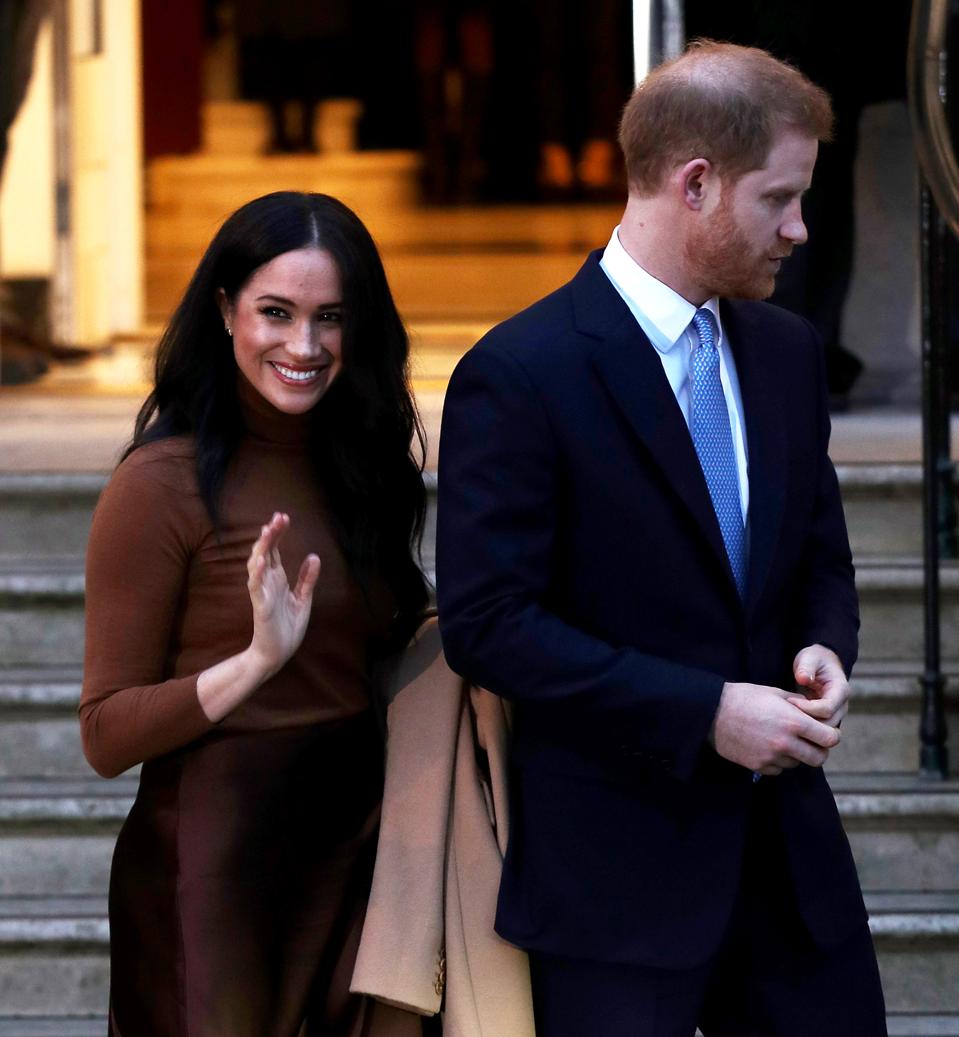 Goodbye To All That: Meghan Markle practices the Royal close-to-body wave-off as she leaves Canada … [+] House with Prince Harry in London on January 7. (Photo by Yui Mok/PA Images via Getty Images)

Less than 24 hours after Buckingham Palace courtiers issued a terse, measured press release stating that the work on the Duke and Duchess of Sussex’s complicated exit from royal life is just beginning and that ‘these things take time,’ Meghan Markle turned on a dime and left Britain on Thursday, returning to Canada, where she has a home.

The act of flight was a breathtaking gesture in every sense – it spoke volumes about her relationship with her in-laws and her attitude toward all forms of Palace response to her ongoing joust for “freedom,” namely, that she was having none of whatever shards of royal protocol she hadn’t already incinerated with the Sussexes’ January 8 Instagram post. And, the jet-out drove the point doubly home: She wouldn’t be sitting around for Charles and the Queen to come up with any lugubriously heavy royal procedural “offers” for her newly-self-proclaimed freedom, either. The Queen would not have the luxury of negotiating directly with the Duchess. That scullery work would be what Ms. Markle has got Harry enthralled for, the actual, dirty, hands-on negotiation of the legal and financial framing for the Sussexes’ to-date extremely messy retreat from the royal life. 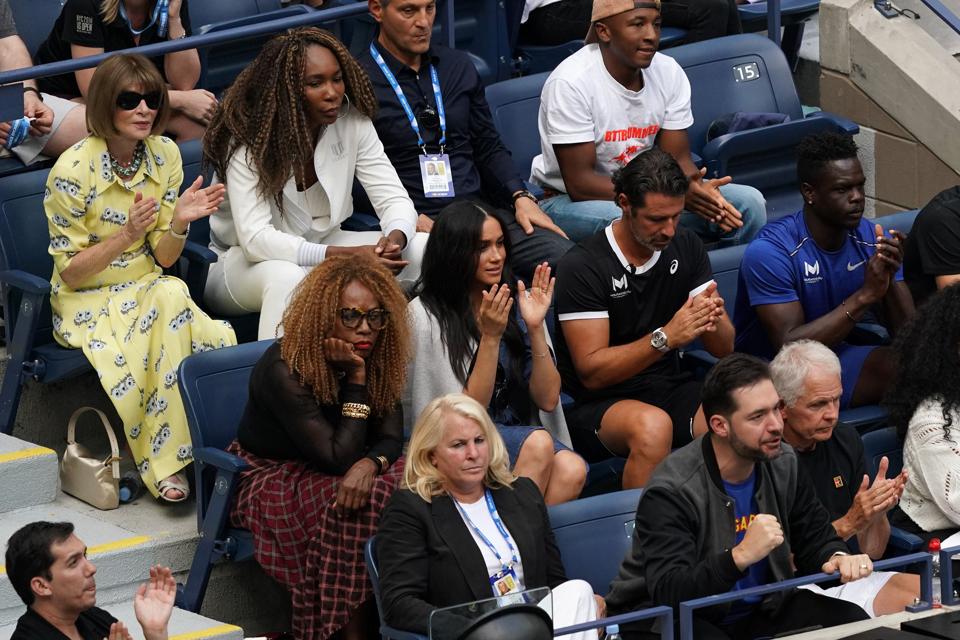 That she had left her son in Canada meant that Ms. Markle had never intended to stay in Britain for long. This fact dovetails with the emerging picture being pieced together in London that the Sussexes had been planning their ‘flight-to-freedom’ from the monarchy for quite some time, reportedly consulting at length with Ms. Markle’s Hollywood talent agency and with the web firm in Toronto that helped her launch her erstwhile blog, „The Tig,“ named for her favorite Italian red, Tiganello, produced by Antinori. More on these North-America-based commercial ladies and gentlemen in a bit.

On this current turnaround, the Duchess of Sussex was in-country for 96 hours, give or take, long enough to pop around to Canada House on her first day back, and then to see the imbroglio that she and the Duke had more or less ignited as a kitchen fire bloom successfully – on the accelerants that they had provided – into a fairly sizeable inferno. Then: Poof! Just when the phalanx of fire-fighting courtiers sprang into action on Thursday, Meghan Markle was gone. 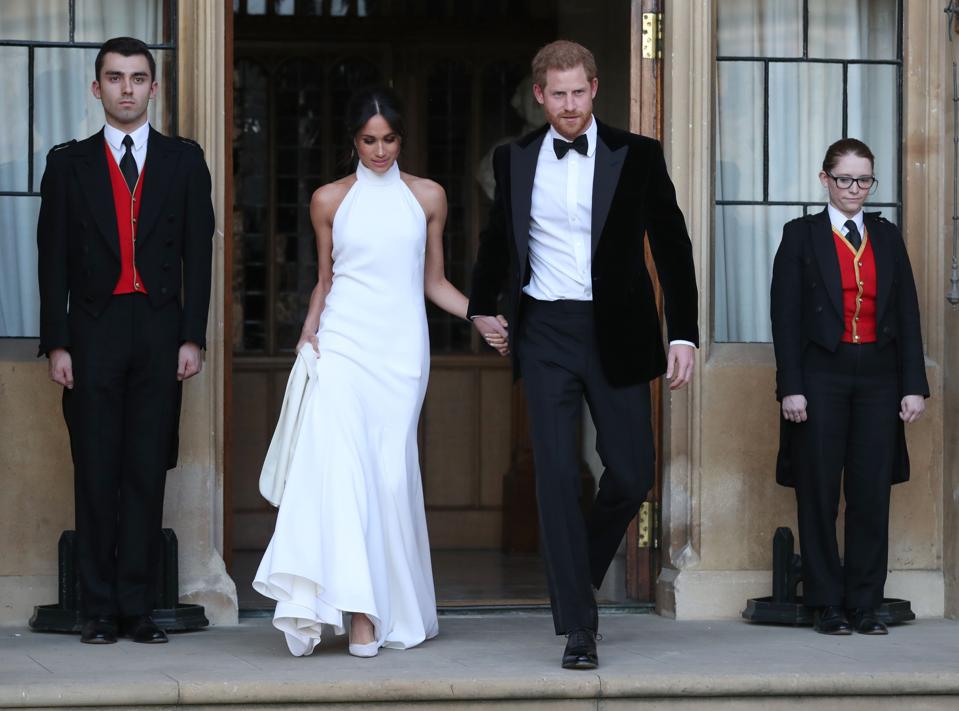 The Early Going Was Nice: The newly married Britain’s Prince Harry, Duke of Sussex, (R) and Meghan … [+] Markle, Duchess of Sussex, (L) leave Windsor Castle in Windsor on May 19, 2018 after their wedding to attend an evening reception at Frogmore House. (Photo by Steve Parsons / POOL / AFP) (Photo credit should read STEVE PARSONS/AFP/Getty Images)

The mystery blooming over the bomb site as a mushroom cloud – meaning, the question that Ms. Markle and Harry will presumably take their time to address, which is to say, will likely not address and do not seem to feel obligated to address – is why it had to happen in that way. It wasn’t necessary. But some clues hinting at an answer to that question have been left strewn in the embers at the edges of the event.

What the Duchess has sown in her wake is a very special layer cake of chaos. And, it can be that that was her point in doing it – her parting gift to the Royal Family, so to speak, for taking her in. 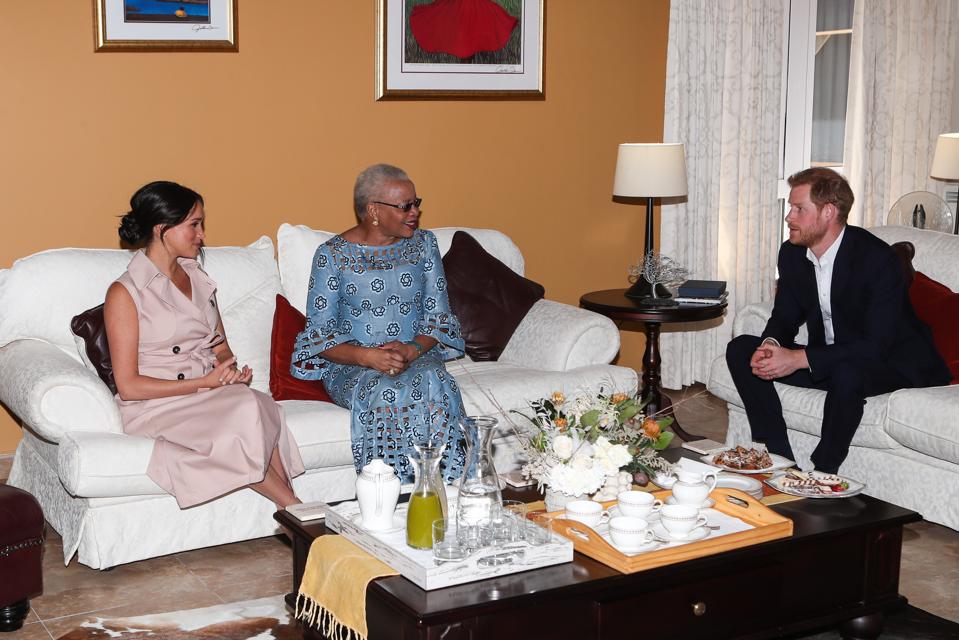 The Grind Of The Late Going: Prince Harry, Duke of Sussex and Meghan, Duchess of Sussex meet Graca … [+] Machel, widow of the late Nelson Mandela on October 02, 2019 in Johannesburg, South Africa. The Duke last met with Mrs Machel during his visit to South Africa in 2015. (Photo by Pool/Samir Hussein/WireImage)

Meghan Markle’s narrative arc in the Royal Family and in Great Britain is not an especially salubrious one: She arrived fresh from the minor television series, the wedding was good splashy fun, and she instantly won over the British public, who quite love Harry. Over the nearly two years since the wedding, she made the early rounds, tasted the British wares, attended a few charity events, took a few trips with Harry, tried to get him to stop shooting the pheasant and the grouse at the family hunts, and brought the beloved Archie into the world. And…..sayonara everybody, it’s all very nice, the big palaces and whatnot, but the life doesn’t really suit.

Her exit conflagration over the last 48 hours involved the Queen and Charles from the moment of ignition – reportedly, they experienced the existence of the Instagram drop from the @sussexroyal account from the television news, pretty much along with everybody else who chanced not to be online at the time. This catalyzed into action literally dozens of courtiers in four royal residences, Balmoral (Charles’ seat in Scotland, where he is now), Sandringham (The Queen’s residence until the beginning of February), Kensington (William), and the Sussexes’ own staff at Windsor (Frogmore House).

Finally, yesterday, the government in the form of Cabinet Minister and Home Secretary Priti Patel was called in to deal with figuring out what a bi-continental royal security force is going to cost Scotland Yard, what with six months in Canada annually being a Sussex strong point in the coming negotiations with the Crown.

It’s a lot, or at least, it was enough for a couple of day’s work in country, so why stick around?

Results Over Hours: How To Provide Flexible Work Opportunities To Parents