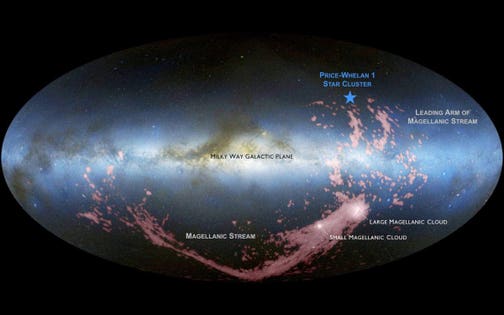 A young cluster of new stars, named Price-Whelan 1 (PW 1), is located 94,000 light-years away in the… [+] outskirts of our Milky Way, but was formed by material ejected from the two Magellanic Clouds interacting hundreds of millions of years ago. This new star association is the first evidence of new star formation arising from the debris stream from the Magellanic Clouds ever discovered.

Within the Milky Way, there are only a few instances of young, blue, newly formed stars. Up until now, practically all of them originated from recent star-formation events in the disk of our galaxy, driven by the density waves of our spiral arms and the collapse of cool gas. Out in the halo of the Milky Way, the gas is much more diffuse and far hotter; the wrong conditions to give birth to new stars.

Thanks to the all-sky coverage of ESA’s Gaia satellite – designed to measure properties of stars such as parallax, motion through the sky, stellar colors, etc. – humanity has gained the ability to measure more than a billion stars within about 100,000 light-years of home: almost the entire extent of the Milky Way galaxy. When scientists used this data set to search for new, blue stars, they got quite a surprise: 94,000 light-years away, deep in the galactic halo’s outskirts, a giant collection of young stars was found. It’s the first of its kind, and scientists think they understand why.

The life cycles of stars can be understood in the context of the color/magnitude diagram shown here.… [+] As the population of stars age, they ‘turn off’ the diagram, allowing us to date the age of the cluster in question, with older star clusters losing all of their blue stars after a certain amount of time.

When you find a dense collection of stars all in one place, there’s a good chance that they all formed together. The way to check, for certain, is to measure both the magnitudes (intrinsic brightness) and colors (directly related to temperature) of each star in that stellar association. If the stars make a nice, curved line with a particular space when you plot them all – along with a turn-off where the hottest stars have run out of fuel – the stars not only have a common origin, but we can determine their age.

With the novel technology aboard ESA’s Gaia, you can go beyond that and also see:

Remarkably, all of these factors line up, and this new star cluster really is a finding like nothing ever before.

Astronomers have spotted a group of young stars (blue) on the outskirts of the Milky Way,… [+] determining their properties, positions, and association in 3D space using data from ESA’s Gaia mission. The scientists propose that these stars formed from material from two dwarf galaxies known as the Magellanic Clouds.

Announced at the American Astronomical Society by astronomers Adrian Price-Whelan and David Nidever, this new group of stars, named Price-Whelan 1 (PW 1), has the following properties:

It’s no surprise that the gravitational interactions between the Milky Way and each of the Magellanic Clouds would lead to the formation of new stars; the tidal forces between gas-filled objects often triggers new star-formation events.

The Large Magellanic Cloud is home to the closest supernova of the last century. The pink regions… [+] here are not artificial, but are signals of ionized hydrogen and active star formation, likely triggered by gravitational interactions and tidal forces arising from its interaction with the neighboring Small Magellanic Cloud and the Milky Way.

What’s very surprising, however, is that the new stars are neither located in the Magellanic Clouds themselves nor in the debris stream of gas that trails them. Instead, they’re located some 70,000 light-years closer than either of those infalling satellite galaxies. Never before has a new star cluster in a stream of gas leading a galaxy, rather than trailing it, been found.

But there are good reasons to believe that these new stars did indeed form from the gas in the Magellanic Clouds, and yet now are closer to the Milky Way and on the opposite side from the clouds. Because we can see how both the Large and Small Magellanic Clouds are moving and where, in three-dimensional space, they’re located today, we can reconstruct their past motions.

This simulation shows how the Large and Small Magellanic Clouds likely interacted with one another… [+] over the past few hundred million years, bringing them to their current position. The gas, shown in orange and yellow, gets expelled in both the leading and trailing directions, with the leading gas having already passed through the galactic plane.

Based on simulations that include gas within those galaxies, we can clearly see that it produces not only a trailing stream, but a leading stream of gas as well.

According to simulations, this leading stream of gas should have already passed through the plane of the Milky Way, where our galaxy’s gas is densest. The presence, location, and history of this flowing gas isn’t just expected from simulations, but has actually been directly detected and mapped out explicitly.

While the leading stream of this gas is much more diffuse and lower in mass overall than the gas found either in or behind the Magellanic Clouds, there are three observations that strongly indicate these new Milky Way stars come from this gas stream.

The stars observed in cluster PW 1 are consistent with a formation history that began when the… [+] leading gas debris stream from the Magellanic Clouds passed through the Milky Way’s galactic plane.

A. Price-Whelan; Simulation by J. Hunt

The discovery of this new star cluster – which is comparable in mass, age, and star type (but not element abundances) to the Pleiades – marks the very first time after some 30 years of searches that stars exist somewhere in the Magellanic stream. These stars were very much expected to exist, since cold gas is what forms new stars, and about 95% of the cold gas found in the Milky Way comes from the Magellanic stream.

In contrast to that, almost all of the gas in the halo of the Milky Way is hot and diffuse, but not as diffuse as was once thought. There is an observed offset between the motion of the stars and the motion of the gas in the debris stream, indicating a much greater amount of mass present in the Milky Way’s hot gas corona. If this turns out to be true, it could point towards a solution to the “missing baryons” problem: showing us where the component of dark matter that is made of protons, neutrons, and electrons might be hiding.

Our galaxy is thought to be embedded in an enormous, diffuse dark matter halo, indicating that there… [+] must be dark matter surrounding everything from our solar system to nearby dwarf galaxies. This halo consists of a mix of ‘dark baryons,’ which represent normal matter at high temperatures, as well as non-baryonic dark matter which comprises the majority (5/6ths) of the total galactic mass.

Finding these stars at a distance of 94,000 light-years from us was also a bit of a surprising discovery, because earlier observations based on the gas alone had indicated a distance that was almost twice as far away. However, measuring the distance to stars is much easier (and has much smaller uncertainties) and much more reliable, indicating that the gas is probably closer than we’d previously thought.

This means that the gas from the Magellanic Clouds – at least from the leading stream of the clouds – is headed into the Milky Way to replenish the amount of new material available for star formation much sooner than expected. These new stars from the stellar association PW 1 are bound to our Milky Way, and will remain a part of our galaxy for the entirety of their lifetimes.

The sunflower galaxy, Messier 63, is somewhat similar to our own, but lacks the inflowing material… [+] from the satellite galaxies that our Milky Way possesses. This is an evolved spiral galaxy that hasn’t had a major merger recently, and is only somewhat more spiral-y (or flocculent) than our own.

It wasn’t only ESA’s Gaia that observed these new stars, though, and complementary observations were able to provide us with additional information about this cluster’s origin. The National Science Foundation’s Magellan telescopes measured the individual stars from the ground, and found that the brightest, bluest stars associated with PW 1 weren’t necessarily gravitationally bound; they appear to be a cluster that’s in the process of dissociating, or flying apart.

Another National Science Foundation ground-based instrument, the Dark Energy Camera, was able to measure the presence of other stars at this same distance and with the same motions, and taught us that this really is a young grouping with stars of many different masses and the same age: 116 million years. We can be quite confident these are stars that formed all at once, not from mergers or any other “straggler” process.

The color-magnitude diagram of the other stars in cluster PW 1, as identified from ground-based… [+] telescopes, clearly shows evidence of the color-magnitude relation expected from a single cluster that formed all at once some 116 million years ago.

This is the first direct evidence of new stars forming from any galactic stream associated with the Magellanic Clouds, and it appears to have occurred from a stream of gas that’s already passed through the galactic plane. It’s eminently conceivable that it was that very event – when this gas ejected from the Magellanic Clouds passed through the Milky Way’s disk – was what triggered the formation of the new stars we’re seeing today.

When you take all of this information together, it leads to a remarkable conclusion that changes the way we think our local galactic neighborhood is evolving. New gas is already being funneled into the Milky way from satellite galaxies that are still nearly 200,000 light-years away. This gas, low in heavy element abundance but cool in temperature, provides about 95% of the cold gas suitable for the formation of new Milky Way stars. These nearby galaxies haven’t even encountered us yet, and we’re already forming new stars because of them.

Four Phases Of The Coronavirus Pandemic

COVID Killer Cleanbox In The Right Spot At...