The N.H.L. At The Break: Hockey’s Best Values

The N.H.L resumes play tonight following its all-star break. With teams around the 50-game mark of the 82-game schedule, there have been some major steals this season in terms of dollar-to-production value. A combination of entry-level contract breakout performers, redemption stories for veterans and some shrewd signings by general managers have produced this mix of bargains on ice. 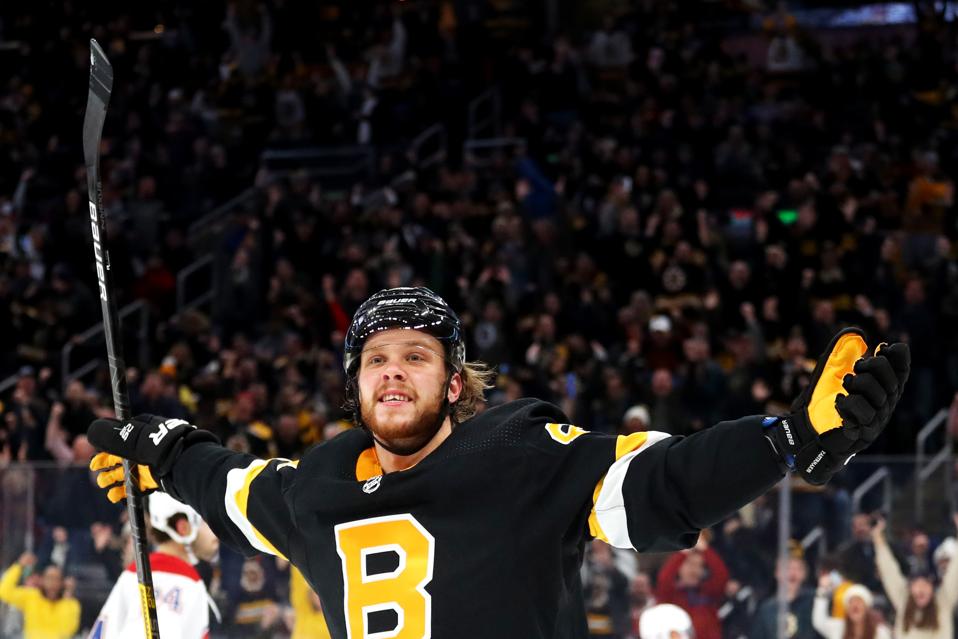 Boston’s David Pastrnak leads the league in goals–and does so well under market value.

Pettersson is in the second year of his entry-level deal and has emerged as one of the most cerebral and most complete players in the game. After a dominant season in Sweden as an 18-year-old, he captured the Calder Trophy last year as the N.H.L.’s top rookie. This season, Pettersson has taken his two-way game to another level, bringing a stronger build and sharper reads to the defensive zone while upping his offensive production to over a point-per-game. He has left the other forwards in his draft year in the dust, including the top two overall picks, New Jersey’s Nico Hischier and Philadelphia’s Nolan Patrick.

Svechnikov had a fine rookie campaign after being taken No. 2 overall, but was perhaps most known for his ill-fated decision to take on Alex Ovechkin in a fight during last year’s playoffs. This season, he’s already eclipsed his point total from last year 37, with 45 points in 50 contests. Svechnikov appears next in line to enter the pantheon of prolific Russian wingers, as well as become a fixture on the highlight reel. He has scored not one but two lacrosse-style goals this season.

Last season Makar won the Hobey Baker Award as the nation’s top player, led his team to the N.C.A.A. final and made his pro debut in the middle of a playoff series. Now, he is pursuing Larry Murphy’s single-season record for points by a rookie defenseman—he’d be in comfortable position to surpass it if not for an injury—and emerging as a force at the NHL level. His skating and hockey sense have wowed veterans and coaches around the league as he has paced the Calder Trophy race. Teammate Samuel Girard, a defenseman as well, has also proven to be a fantastic value.

Jarry was thrust unexpectedly into heavy duty between the pipes for Pittsburgh and he responded famously. He has been especially dominant at home, posting a 1.85 goals-against average and a .938 save percentage. He was the league’s second star of the month in December, turning in a 1.54 G.A.A. and a .947 save percentage. He and incumbent Matt Murray have a healthy competition that could roll into the summer when both are restricted free agents. Defenseman John Marino, a rookie, has also been a sublime find for the Penguins.

Aside from Edmonton’s Connor McDavid, few players can claim to possess the combination of production, pace creation and flat-out electrifying performance that MacKinnon offers. MacKinnon, however, earns less than half of McDavid’s salary. His explosive skating and complete offensive game have been immeasurably valuable for an Avs club that has seen its other top players—Makar, Mikko Rantanen, Gabriel Landeskog and Philipp Grubauer—miss time with injuries. He leads his team in scoring by a much wider margin than any other player. The Avs have a staggering amount of cap space and flexibility for a competitive team, and a shrewd deal for their top player is a major reason why.

A savvy contract has made Pastrnak quite a bargain. Last season that helped the B’s round out their secondary scoring and make a run all the way to Game 7 of the Stanley Cup Final. This season, Pastrnak has led the league in goals practically wire to wire and firmly established himself as the top Czech player in the N.H.L. He and linemate Brad Marchand have been the Eastern Conference’s top scoring duo, flanking Patrice Bergeron on the “perfection line.”

The Predators have gotten superlative play from Josi over the span of the seven-year, $28 million deal they astutely signed him to early in his career. Josi has emerged from the shadow of his former defense partner Shea Weber to become not only the Predators’ captain but arguably the best all-around defenseman in the N.H.L. His offensive game is silky, economical and improvised within structure, and his defensive game is sound in terms of positioning and effective at initiating transition.

In 2017, Shattenkirk was the big trade-deadline acquisition that was intended to put a historically talented Washington team over the top. They lost to their arch rivals from Pittsburgh in the second round. Then Shattenkirk, a Connecticut native, signed with his hometown New York Rangers. The signing crashed and burned, so after two seasons, the Rangers bought him out of his contract. Today, Shattenkirk’s 27 points tie him with Los Angeles’s Drew Doughty, whose $88 million contract made him the league’s highest-paid defenseman until Erik Karlsson signed his $92 million deal (Karlsson has 36 points). Shattenkirk’s +21 rating is far superior to that of Karlsson (-16) or Doughty (-11).

The Blue Jackets have managed to not only stay afloat after hemorrhaging talent in free agency but thrive. The fulcrum of their success has been their top defensive pairing. Seth Jones’ $5.4 million cap hit for this season and two more makes his arguably the most attractive contract for any defenseman. His ability to control a game defensively and execute offensively are rivaled perhaps only by another tremendous value, Tampa Bay’s Victor Hedman. Jones’s partner Zach Werenski, a $5 million a year standout who will be a restricted free agent in 2022, gives the Jackets’ a top pairing with formidable size and offensive ability on both sides.

Jonathan Huberdeau has skated between Aleksander Barkov and Evgenii Dadonov to form a fearsome top line. All three players can pass and shoot, and Barkov’s total excellence has made him the most popular pick for “most underrated player” in player polls in recent years. Dadonov’s $4 million deal is up after this season, during which he has been the team’s top sniper. But Barkov and Huberdeau have two and three more years, respectively, left on their $5.9 million-a-year contracts. Huberdeau’s 65 points tie him for sixth in the league, and he has been surging of late with 34 points in 23 games between December and January.

Humor In Marketing: Do’s And Don’ts From A Comedian, Humor Speaker, And Author

The NFL’s Biggest Mismatch: Owners Vs. Players In...