Home Business The Nativity Scene: An Inspiration For Cultures Around The World
Business

The Nativity Scene: An Inspiration For Cultures Around The World

Some weeks ago I met with a priest named Fr. Mike at his office in the local Curia. He is a well-trained lawyer who is now in charge of civil legal affairs for one of the largest Catholic dioceses in Europe. His work deals with donations, inheritances, real estate, and the like. Several ideas from that conversation are still fresh in my mind. One of aspect of our conversation dealt with Fr. Mike’s workload. When I saw the pile of cases he had in front of him, I asked him how large his team was. As it turns out, the “team” is Fr. Mike and a single assistant. Just imagine his work. I felt bad taking up his time.

The other part of the conversation that surprised me was when he told me that some Catholics wanted to remove the crèche (Nativity scene, pesebre in Spanish or presepe in Italian) from public displays, arguing that it might be offensive or biased against non-Christians. I have travelled throughout the Western world, and even during my years of agnosticism I never found anything offensive in the Nativity story and its representation. In the United States there have been debates over the right to display religious scenes, even when historically accurate, on government property. But the questions and complaints were seldom raised by Christians.

Let me summarize the tradition of the Nativity scene. Although those who met Jesus must have kept the date of his birth fresh in their memories, the celebration of Christmas and many of its traditional aspects took centuries to develop. Christian traditions and customs are remembrances, efforts to keep in mind events which mark and define the faith. Among these, the celebration of the Nativity – perhaps more so than other Christian holidays – is one which involves traditions and figures from many different cultures. As a Christian I see the crèche as a representation of Truth, but beyond my faith, I see it as an image of unity in diversity rather than a push for one religion. 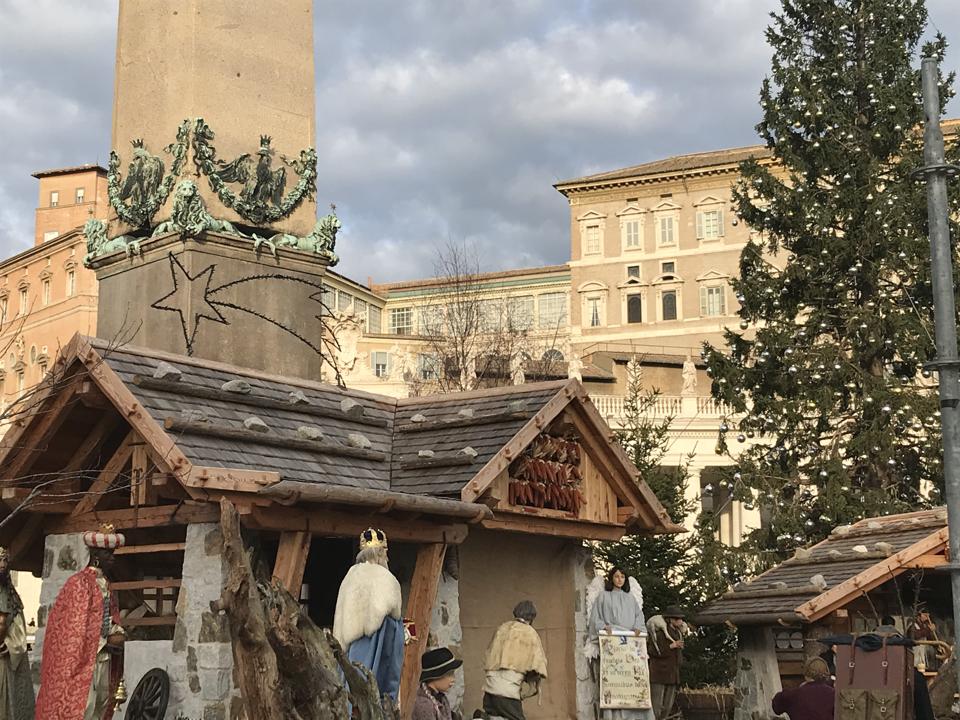 The Nativity scene at St Peter’s Square, December 2019. This year the tree came from Vicenza, Italy

Muslims, who of course did not exist at the time of Jesus’ birth, honor Mary and her son. Some even recite verses from the Qur’an about Jesus and Mary in their prayers. The three wise men came from the East, and scholars mention numerous countries that today are part of that “East” and most dominated by the Muslims: Saudi Arabia, Yemen, Syria, Iran, Iraq, even stretching perhaps into India. New research even points at a Chinese historical connection. Given that the myrrh was from Saba, Southern Yemen or Ethiopia might also claim a place in the Nativity story.

The depictions of these three visitors – whose traditional names are Gaspar, Melchior, and Balthasar – also show them of varied ages and race, with Melchior mentioned as the oldest, Gaspar in the middle, and Balthasar the youngest, perhaps still in his 20s. The predominant religion during their time in the East was Zoroastrianism. From as long ago as the 12th century, Balthasar has been depicted as a dark-skinned “king.” The gifts of gold, myrrh, and frankincense were all greatly appreciated in most cultures around the world. Benedict XVI, writing about the magi, said that they also represent the “search for truth, a search for the true God and, hence, ‘philosophy’ in the original sense of the word.”

Almost everyone can find something to his liking in Christmas symbols. Those who worship nature will remind us that the date was chosen to compete with the feast day of the invincible sun (Sol Invictus), or the winter solstice. One early Pope, Leo I (440-461) censured Christians who on that day continued to celebrate the birth of the sun. I have written previously about the significance of the Christmas tree and the tradition dating back to the 8th-century missionary St. Boniface, who confronted a tree-worshipping culture in what is now Germany. To prove them wrong he felled a large oak which was venerated as a god (Thor). But instead of rejecting the symbolism of trees altogether, he chose the fir tree to become a symbol of Christmas. And cutting trees to celebrate Christmas has not stopped. Huge pines are usually cut, usually from around Europe, to build the Nativity scene in St. Peter’s Square. In 2017 I had the privilege of seeing one I think was the biggest ever at the Vatican, a gift from Poland. It was 92 feet tall and weighed 7 tons. Its trunk was so large that it had to be trimmed in order to fit in the special base. 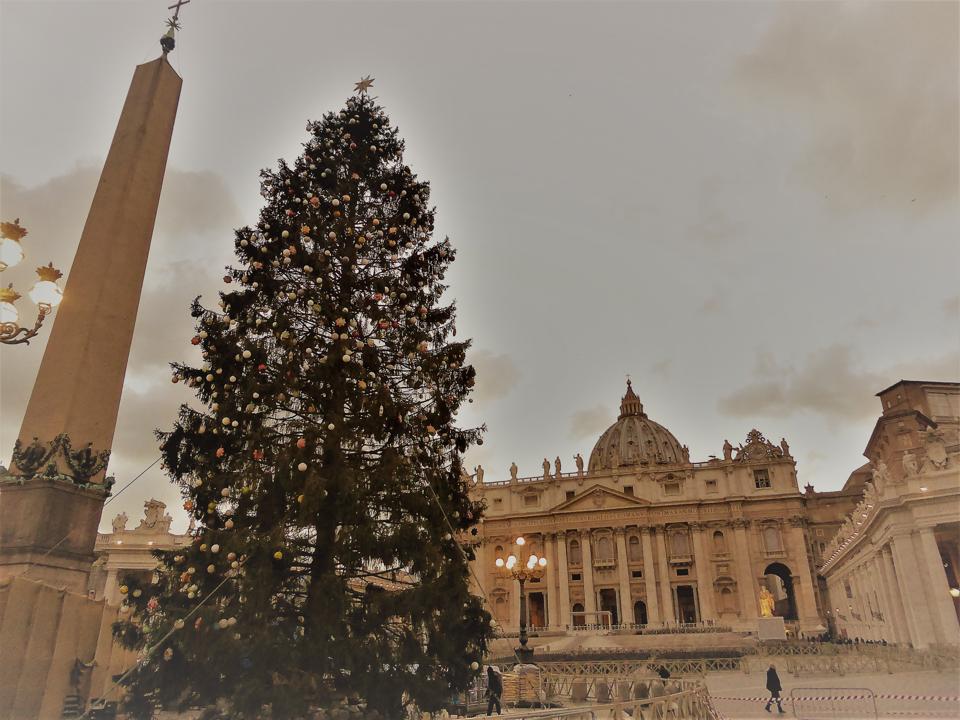 Animal lovers can also delight in almost all the Nativity scenes. An ox and an ass are always represented, as well as sheep with their shepherds. And let us not forget the doves and the shepherds’ dogs.

Italians can also see themselves as part of the story, especially in the role played by St. Francis of Assisi, who supposedly was the first to build a crèche. Tradition says it took place in the small town of Greccio. Located approximately 60 miles north of Rome, the village got its name because long time ago Greeks made it their abode (Greccio is related to greco the Italian word for “Greek”).

It was 1223 when the first Nativity scene was displayed. In 1973 the town of Greccio, still small, started to do a live reenactment of the birth of Jesus, with the local population volunteering as performers. At the beginning of this month, Pope Francis traveled to Greccio and even released an Apostolic Letter addressing key aspects of the Nativity. In it he writes: “Setting up the Christmas crèche in our homes helps us to relive the history of what took place in Bethlehem. Naturally, the Gospels remain our source for understanding and reflecting on that event. At the same time, its portrayal in the crèche helps us to imagine the scene. It touches our hearts and makes us enter into salvation history as contemporaries of an event that is living and real in a broad gamut of historical and cultural contexts.”

Let me continue with the list of the many who can find part of their life expressed in the scene. For those who love food: during Advent in earlier times, Christians used to fast, as they do today during Lent. So when Christmas came, it was the ideal time for wine, gifts, and banquets. Numerous professions and disciplines can feel represented as well, from scientists (the magi), to carpenters (St. Joseph), to sculptors and carvers (who each year build the scenes). In the Nativity scene we see some with Jewish and noble lineage, and others with different and more humble upbringing.

The Nativity, and the way we celebrate it, is a story that balances national or regional traditions and a more universal message. I do not know if its message can help find a middle ground between the globalists and the nationalists of today. I do know, however, that banning its display, or circumscribing it to private houses will do little to find a right balance and will exacerbate divisions.

During my meeting with Fr. Mike, another thing that caught my eye was a document sporting a big World Wildlife Fund logo, with its emblematic panda. I asked, “Is the World Wildlife Fund involved in a legal case with the diocese?” “It is just a joke from our staff,” he answered with a smile. “They say that priests are an endangered species and that we need protection.” He is right. The situation is particularly hard in Italy where, especially these last years, the lack of local vocations has worsened. But if I get my theology right, there were even fewer priests when the baby Jesus was born. The Christmas season fills many all over the world with joy. Taking advantage of its positive lessons is not only for priests. What we do with it depends on us, but we should use it to unite, not divide.

How Brian Williams Made 11 P.M. The Hottest Hour In Cable News

Prehistoric Parents Let Their Babies Teethe On These Bone Spoons

Lucas Di Grassi On The Environment, The Future...

Can Your Business Pass The Happiness Test?