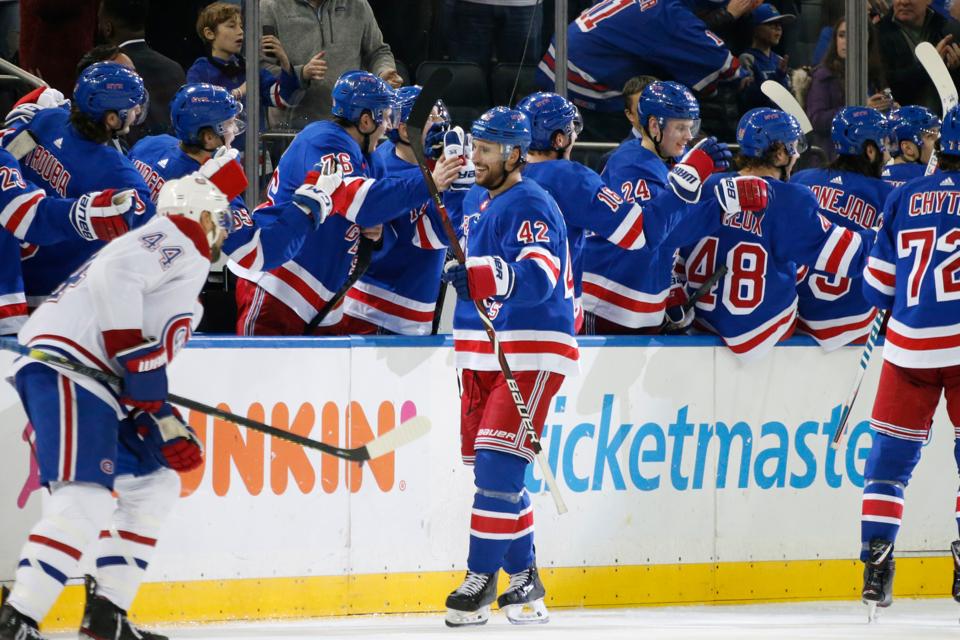 Most hockey teams don’t make much money unless make the playoffs. That’s not the case for those that play in the sport’s best markets.

The New York Rangers have won just one (1994) Stanley Cup since 1940 and have not made the playoffs the past two seasons. Attendance at Madison Square Garden for their home games slipped the past two years. Yet by our count they are the NHL’s most valuable team for the fifth consecutive year, worth $1.65 billion, 6% more than a year ago.

The Blueshirts benefit from being in the sport’s largest market and in the city with the most big companies. Despite losing more games than they won each of the past two seasons, the Rangers posted by far the most revenue ($270 million) and operating income ($123 million) in the league during the 2018-19 season. They ranked first in the league in both combined suite and premium seat revenue (nearly $80 million), advertising and sponsorship revenue (over $40 million), as well as non-NHL revenue, like concerts, at their arena ($30 million). The Rangers also generated the fourth-most cable television revenue (more than $30 million).

A $1.65 billion valuation for an unimpressive hockey team like the Rangers speaks volumes about why publicly traded Madison Square Garden (current enterprise value: $6.16 billion), which owns the Rangers, New York Knicks (among the NBA’s most atrocious teams for decades) and their arena, is planning on splitting into two companies: one that owns the sports teams and another that will own the arenas. If the Rangers and Knicks can be worth a combined $5.65 billion when they are bad, they could be worth over $7 billion as playoff teams.

Although MSG boss James Dolan deserves much criticism for the failures of the Knicks and Rangers, as I wrote a year ago he has has been incredibly good to his shareholders. If you had bet on Dolan since Cablevision spun off all of its sports teams and regional sports networks as Madison Square Garden shares in February 2010 your investment would have increased more than six-fold in a little less than nine years—a much better return than the stock market and even better than Warren Buffett’s Berkshire Hathaway has delivered.

The past year has been a different story, however, with the Rangers and Knicks both looking like they will miss the playoffs again this season and the basketball team having posted back-to-back losses of more than 30 points for the first time in its history. Since my story last year MSG’s stock price, last seen at $282, is up only 16%., about half as much as the S&P 500 and two percentage points less than Berkshire Hathaway. My sense is given the increase in sports team values—even bad baseball teams easily outperform the stock market—MSG’s stock is very undervalued for investors with a long term bent.

Our valuations are enterprise values (equity plus net debt) that include the economics of each team’s arena deal, but not the value of the real estate itself . We do our best to adjust values for teams moving into new arenas based on how the arena is being financed, when it will open and the degree to which we can estimate revenues from the new arena.

The information used to compile our valuations primarily came from the teams, sports bankers, media consultants, and public documents, like arena lease agreements and bond documents. Pollstar was our primary source for arena concert revenue.

Long Commute? 15 Ways To Make The Most Of Your Travel Time

How Bite Is Revolutionizing Toothpaste And The Oral Care Industry

Trump Administration Will Disclose Most Businesses That Got...

The Bushfires in Australia Could Force The Australian...

What The SEC Football TV Deal Says About...

Why “Being The Glass” Creates Some Of Streaming...

Ask Ethan: If Einstein Is Right And E...

From Open Hiring To Negligent Hiring: How To...