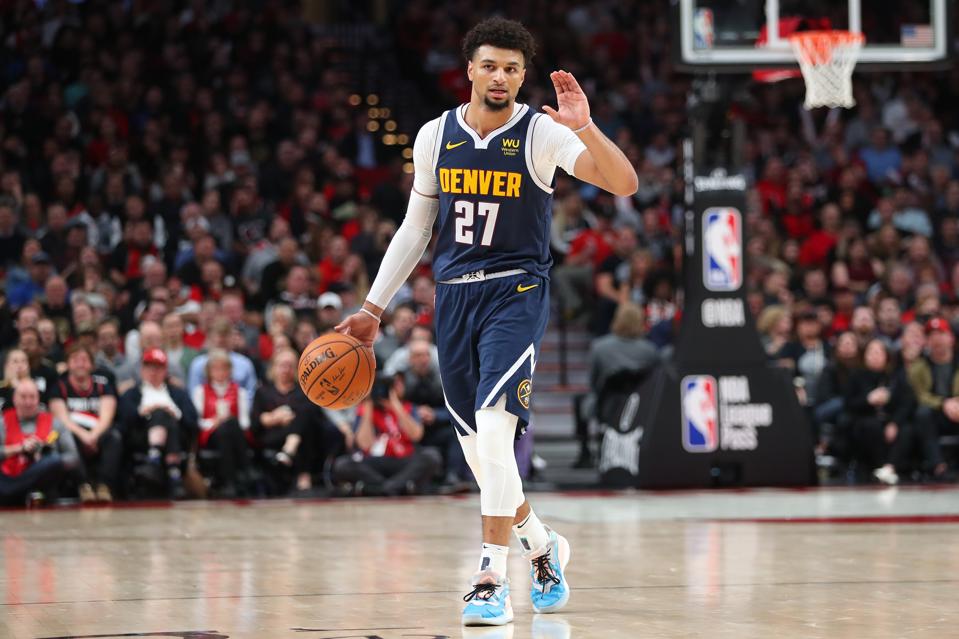 Michael Malone wants point guards Jamal Murray and Monte Morris to get the Nuggets into their … [+] offense more quickly.

With their 114-99 win over the Trail Blazers Thursday night, the Denver Nuggets got their offense back on track, shooting a blistering 18 of 36 (50.0%) on three-pointers and keeping Portland’s defense on its heels with dynamic ball movement that has been lacking far too often this season.

The question now becomes whether the Nuggets can make it stick.

The victory at the Pepsi Center – which included Carmelo Anthony’s first appearance in a Blazers jersey against his former team – followed a brutal stretch with five of six games on the road in which Denver managed only one win against the lowly New York Knicks as their place in the standings slipped from 13-3 (.813) and second in the Western Conference to 14-8 (.636) with a slide down to fifth.

It was a critical regrouping for the Nuggets as they enter into a pivotal juncture of their season schedule featuring eight of 10 games at home (the win over Portland was the first of a five-game home stand) and a major opportunity to steer their errant ship back on course.

Doing this will require recapturing some of the offensive prowess which has surprisingly eluded the Nuggets in a season when their high degree of roster continuity and deep pool of skilled players, led by arguably the best passing big man in NBA history in Nikola Jokic and his comrade-in-arms Jamal Murray, had Denver projected as one of the league’s top offenses.

Instead it has been their defense which is elite, with a 102.5 defensive rating that’s good for second-best in the NBA, while their offense has sputtered with a rating of 107.2 that puts it 18th in the league – not terrible, but far below the expectations many had for Denver to be in the top five.

One avenue head coach Michael Malone sees for the Nuggets to boost their offense is pushing the pace more, and he believes that in part this starts on the defensive end of the ball.

“It’s a simple thing for us,” he explained to TNT’s Kristen Ledlow on the broadcast of the Portland game. “When we defend, that gets us out to run, now we can play downhill, attack and share the ball. That’s when we’re at our best.”

In terms of wins and losses, Malone’s assertion that Denver is better when they ramp up the pace is correct. Despite being dead last in the NBA with a pace of 97.7, when the Nuggets have played at a faster pace this season it has produced better results.

The chart above shows the differences on average in several efficiency metrics between the 11 games this season when the Nuggets played at a pace of 98 or faster versus the 12 games in which their pace was slower than 98.

The bottom-line difference in winning percentages, .727 in faster-paced games compared with .583 when the Nuggets played more slowly, is significant. Extrapolated to an 82-game season, that would be the difference between 59 or 60 wins versus about 48 wins, and likely the difference between the first or second seed and the seventh or eighth. A 7.6 net rating would be good for fourth in the NBA as of this writing, meaning that the Nuggets are playing like a top-five team when they play with pace.

More interesting, and perhaps more counter-intuitive, is the fact that Denver’s defense has shown even greater improvement than their offense when playing at a faster pace. There may be somewhat of a chicken-and-egg scenario here if Malone’s hypothesis that better defense produces better offense rather than the other way around (although Altitude color commentator for the Nuggets Scott Hastings might disagree).

The fact that Denver is still a bottom-dweller in pace may not be for lack of trying, at least from the coaching staff’s perspective. When Reggie Miller mentioned on the broadcast that Malone “wanted Monte Morris and Jamal Murray to get the ball up within three seconds to allow them to swing the ball from side to side,” he was not breaking a recent development. In a report for the Denver Post early two years ago, midway through the 2017-18 season,  Gina Mizell noted that Malone wanted “the ball over the half-court line in three seconds” after pulling down defensive rebounds in order to give Denver more time on the shot clock to “move it from side to side, for players to cut and for centerpiece Nikola Jokic to utilize his passing to generate easy layups and open 3-pointers.”

In any case, it would seem to behoove the Nuggets to make a concerted effort to play faster, and that responsibility falls not only on the shoulders of Murray, Morris and Jokic, but the entire team. And with the current home-heavy schedule stretch underway, it affords them a great opportunity to put the execution of pace-pushing into practice, and get their offense on the improving trajectory it will need to take for Denver to climb once again in the standings and make a deep playoff run next spring.

[All statistics in the article via NBA.com/stats.]

Four Business Lessons I Learned On The Farm

The Importance Of Paying It Forward Once You’re...

Procrastinators Rejoice: Here’s What To Save On If...