The Number One Carbon Capture Technology Recommended For The US: Trees 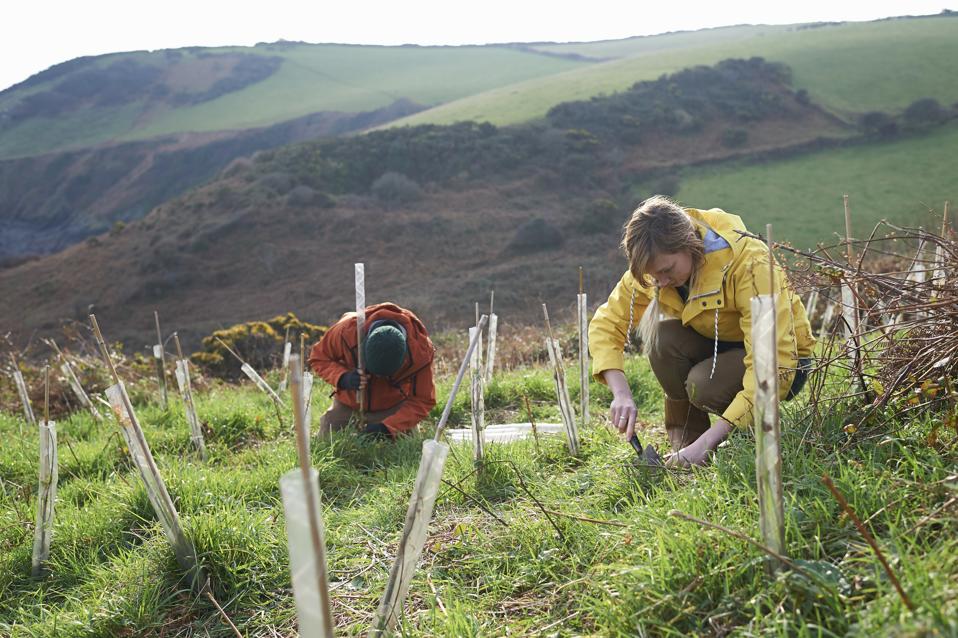 The United States should spend as much as $4.5 billion per year planting trees to achieve carbon neutrality by mid-century, according to a comprehensive carbon-removal portfolio released this morning by the World Resources Institute.

WRI alos recommends several other technologies for the U.S., including capturing carbon from the air, managing soil on 10 million acres of farmland, locking carbon into minerals and products, and breeding crops with deeper root systems. But WRI recommends those technologies together receive only about a third as much funding as trees.

“The United States needs to make large-scale investments in carbon removal in the coming years if the country is to achieve carbon neutrality by mid-century,” according to the WRI working paper. “These options would require up to $6 billion per year in federal funding over the next 10 years, with the lion’s share in this first decade dedicated to restoring trees to the landscape.”

The U.S. needs to remove 2 gigatons of carbon from the atmophere per year by 2050. Tree restoration could remove about a sixth of that—360 million metric tons, WRI estimates, without displacing agriculture.

“Restoring trees to the landscape represents the single largest near-term opportunity to deploy carbon removal at scale in the United States,” WRI says. “Although the potential for tree restoration is constrained by competing demands for the use of land—especially for agriculture, which accounts for half of all GHG emissions from forest conversion—new analysis has identified significant opportunities for reforestation in suburban and exurban areas, post-disturbance forest landscapes, and other non-agricultural lands.”

Most of those planting areas are on private land, only about 10 percent on federal lands, and the cost could rise if landowners demand financial incentives above and beyond their costs.

Project Drawdown director Jonathan Foley has warned against relying too heavily on trees.

“Trees take a long time to soak up carbon,” Foley said in a recent tweet. “And we don’t have that kind of time. That’s (why) we ALSO need immediate cuts in fossil fuel & land use emissions.”

WRI considers trees the “low-hanging fruit” in its carbon-capture portfolio—“A new tax credit, direct payment program, and/or state grant program to underwrite tree restoration in targeted areas over the next 20 years could be one of the most powerful carbon removal measures through 2050”— with a suite of other technologies to follow.

Those other technologies are hampered by one or more obstacles:

“Direct air capture has large potential compared to other carbon removal measures—there is no obvious upper bound to its technical potential.” But to be deployed at scale, devices that suck carbon from the air have to cost less, be powered by low-carbon energy sources, and may need public subsidies.

Farmers could potentially capture and store vast quantities of carbon in both cropland and grazing land, but scientists do not yet well understand how this potential changes across different regions, climates, crops, soil depths and other factors.

Some minerals readily absorb carbon, such as silicates and rocks rich in calcium or magnesium. Those minerals could be mined, mixed with captured carbon and then used in building materials. But these technologies, too, vary in readiness, potential, cost and risk.

WRI recommends an annual investment of $25 for foundational research.

“Breeding crops with more, deeper, and larger roots could increase carbon sequestration in soils. Such enhanced root systems can deliver a number of benefits—like erosion control, improved soil quality, and ability to plant on marginal lands—that could benefit farmers and consumers, as well as the climate, especially as population and food demand continues to grow,” the report says. But “enhanced root crops are for the most part in the early stages of development and require additional research to understand feasibility and carbon removal potential.”

The WRI report entertains the possibility of many other carbon-removal technologies as well, including bioenergy, wood-waste preservation and extended timber rotation, but these technologies have more limited potential to store carbon, it says. “They also face several technical or economic challenges that would further constrain practical potential.”

Green Hydrogen: A Pillar Of Decarbonization?

‘Elder Scrolls Online’ Will Continue To Get Performance...

The ISS Is Getting An Extension – Which...