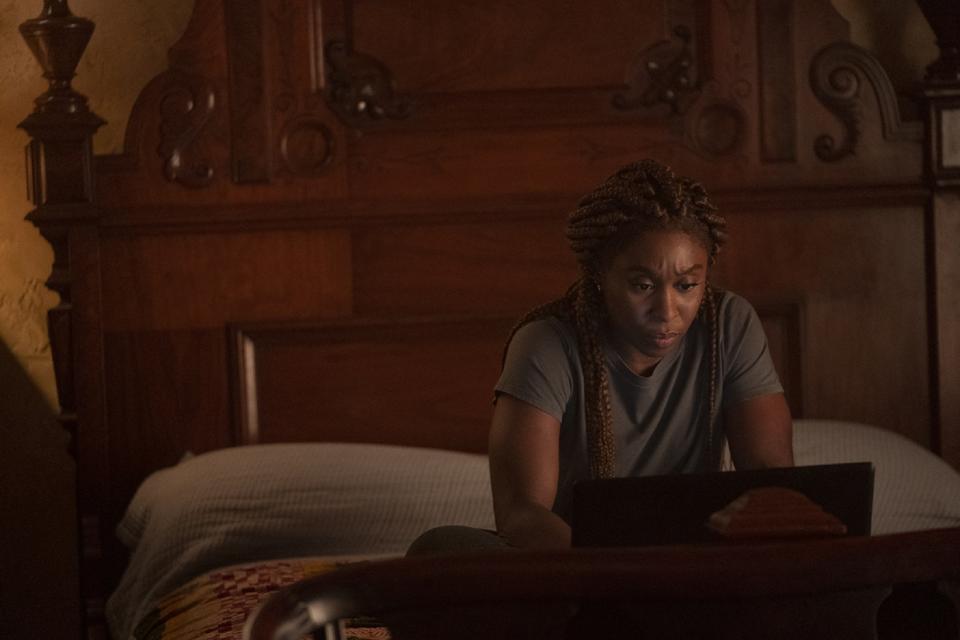 The Outsider wraps up its first season with a scary, surprisingly emotional and at-times confusing … [+] finale.

“There are more things in heaven and earth, Horatio, Than are dreamt of in your philosophy.” – Shakespeare’s Hamlet

It appears that HBO’s The Outsider wanted to leave some questions dangling for viewers at the end of its first—and perhaps only—season. While there’s no confirmation of a second season, certainly this episode and its bizarre post-credits scene have opened that door a little wider.

“Must/Can’t” opens up right where last week’s episode left off, with Jack Hoskins firing down on the unsuspecting detectives. Thankfully, his sniper skills are somewhat impaired by his drunkenness, but he’s still plenty lethal, and not all of our heroes make the best choices.

There was never any chance for Alec Pelley, of course, but the other victims of this ambush probably should have played it a little safer, or attempted to flank Jack instead of running out into the open so much. Andy is shot and killed trying to drive off to get phone reception and bring help. Howie is killed when he tries to rescue him from the car which explodes, burning both of them to a crisp.

Claude’s brother is killed when he tries to take Jack out in the middle of the dirt road with his shotgun. Shotgun versus high-powered sniper rifle at this distance doesn’t seem like a great idea to me.

Yunis is winged but not badly. Only Ralph, Holly and Claude escape unscathed. Jack let’s himself get bitten by the rattle snake and then stumbles his way down to the survivors. He tells them that “it’s” in the cave and then puts his mouth over the end of his rifle and pulls the trigger. Poor Jack. He wasn’t a very good person, but this was a bad way to go.

Ralph and Holly go into the cave where they finally come to El Cuco’s hiding place. He’s fully transformed into Claude now. They talk and Holly asks him questions, while Ralph keeps telling him to shut up every time he tries to answer them. Ralph is a believer, but he doesn’t care to hear any more about the supernatural than he needs to know. What follows is a curious sequence of events.

The real Claude also comes down into the cave, vengeance on his mind. They tell him not to shoot because he could bring the entire cave down on them, but he doesn’t listen and there’s a cave-in, though nothing serious enough to kill or trap them. Claude is hurt and El Cuco appears to be dead as well. Holly even drives a knife into the beast’s heart just to make sure.

But when the three of them are leaving, Ralph has a vision of his son, Derek, and Ollie Peterson who he shot and killed when Ollie killed Terry Maitland. He’s the only one who sees these boys, but it’s enough to convince him that the creature is merely playing possum. He goes back and smashes its head in with a rock. 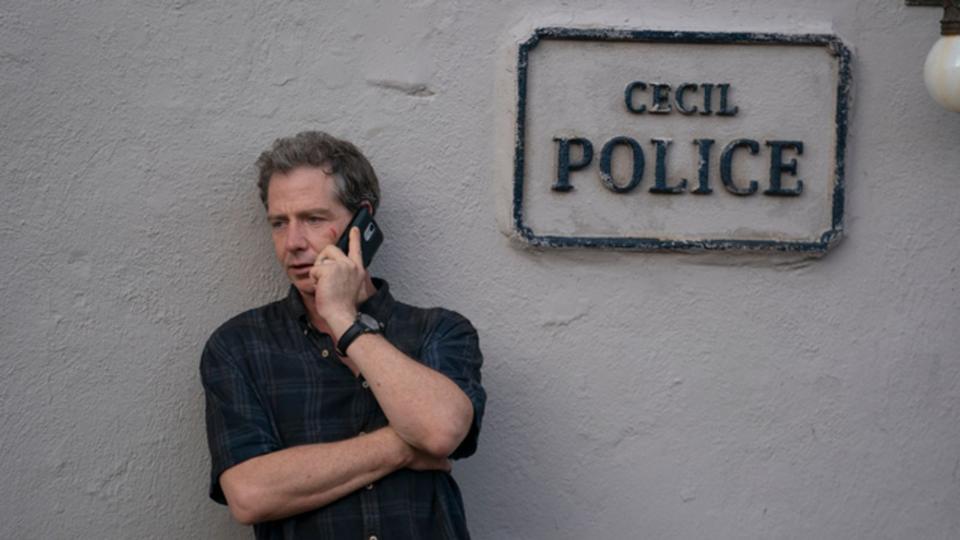 Two curious things in this scene. First of all, I can understand why you might not want to risk the beast escaping. If they revealed him to the world and he was taken to be studied or incarcerated, there is a pretty good chance that he could scratch someone or get free somehow. But burying all evidence of El Cuco? That hardly seems to help in their cause to exonerate Terry, or to track down potential other monsters. Speaking of which, we never hear about the other dead boy in Cherokee Creek. Is it another monster, or just a copy-cat killer? Weird that we don’t hear a single thing about it in the season finale.

But the most confounding moment in the entire episode—far more than the bizarre post-credits scene—is when Ralph mentions clearing Terry’s name to Holly and she replies, “Who’s Terry?”

There are plenty of different ways to interpret this, of course, but none of them feel right to me. There’s no way she doesn’t know who Terry is, and even all the stress and trauma and fear that she’s just experienced with Jack’s ambush, Andy’s death and the confrontation with the Outsider, wouldn’t make her suddenly forget the subject of her investigation. She’s spoken with Terry’s wife. She was hired to help look into his case and has mentioned him many times before.

Nor is it possible that this isn’t actually Holly. I just don’t think she’d be off gallivanting with all these detectives trying to take down El Cuco if she was, herself, a monster. Later, in the weird post-credits scene when she sees Jack in the mirror and then we see her with a scratch looking up Terry’s exoneration on her laptop and listening to music, things get even more uncertain and confusing. When she first glimpses Jack she instinctively looks at her neck to make sure there’s no mark there.

But when she’s in the bed, fiddling with her hair and listening to music it just doesn’t seem like Holly at all. The casualness of her demeanor, the weirdly intent way she’s reading the Maitland story, the emphasis on her long fingernails, the fact that she’s listening to music which I’m not sure we’ve ever seen her do before, all of this makes for a very surreal shot. I’m not sure what to make of it.

On the one hand, showing us the scratch on her arm could be a clue that El Cuco scratched her and, while badly injured, could still come back in her form. On the other hand, why is she acting so different here? This can’t be El Cuco—El Cuco wouldn’t have the scratch, only the real Holly would. It’s a little mystifying. 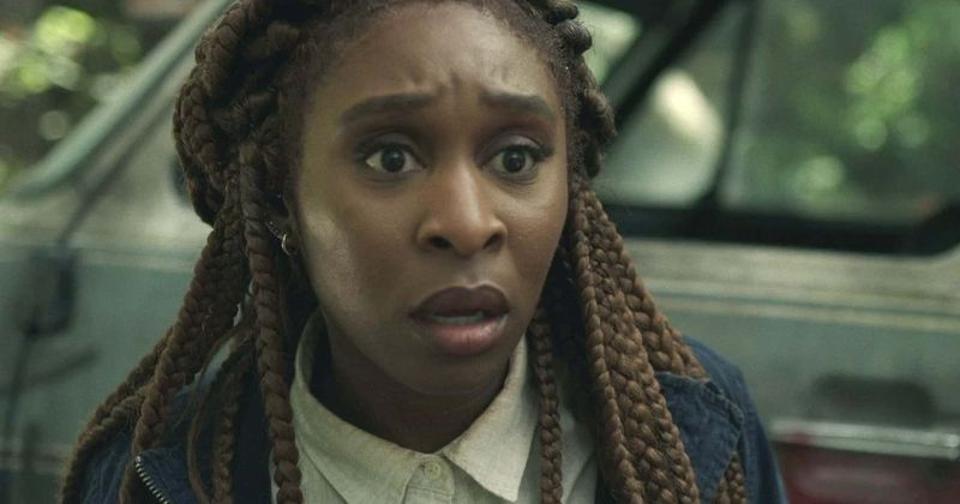 Meanwhile, I have a hard time understanding how Holly would have been scratched in the cave. We didn’t see it happen and she was wearing a long-sleeve jacket. He wouldn’t be able to scratch her on the forearm. That she and Ralph both saw ghosts also complicates things. It looks like Ralph left his jacket in the cave also, which could be bad news in and of itself. It’s all very perplexing and I suppose it’s designed to be. Everyone is talking about what it all means, and while some are unhappy with the whole thing, the chatter seems to be pretty high. That’s a good thing for anyone hoping for a Season 2.

The rest of the episode involved Ralph, Yunis, Claude and Holly covering up what actually happened. They convince the DA to reopen the case and he goes to tell Glory Maitland personally. It’s a nice moment and there’s a sense of real closure when her two daughters come downstairs and one asks, “Was he mean to you mommy?” and she says, with a slight smile, “No. No he wasn’t mean to me.” Maybe they will finally find some peace.

Perhaps the most powerful moment of the entire episode was when Ralph and Jeannie were sitting by their sons grave talking about Ralph’s dream of Derek. “What did he say to you?” she asks. “That I should let him go,” Ralph replies. “Yeah fat chance,” Jeannie shoots back and they both laugh, though Ralph’s laugh is half-sob. Truly, the acting in this show is just outstanding all around. Ben Mendelsohn and Cynthia Erivo both deserve awards. The rest of the cast is terrific as well. Paddy Considine delivered his best performance yet as both El Cuco and Claude at the same time down in the cave.

I really liked this season (series?) finale. I’ve heard others grumbling about it being weak or sloppy or whatever, but I think it was incredibly effective in several different ways. The opening scene was tense and terrifying, with a huge body count for a show that has been, up to this point, pretty much devoid of shoot-outs and that kind of action.

The scene in the cave was just as frightening, and while it started to get a bit confusing with the whole “Who’s Terry?” bit (and later with the post-credits scene) I think ending with some questions hanging there isn’t a bad idea at all. We have some mysteries left to solve should they renew this for Season 2, and I can’t wait to figure out just what’s going on.

Holly’s final line to Ralph—that “it takes an Outsider to know an Outsider” was absolutely brilliant, and made me realize that at least in the show, the title refers as much to Holly as it does to the beast. That’s pretty wonderful. When he asks her if there are more things like that out there she just shrugs and smiles and doesn’t say a word.

If You Can’t Start Your Startup Hire Someone Who Can