The Recession Arrived Suddenly & With A Vengeance: Notes On The Ongoing Financial Market Chaos 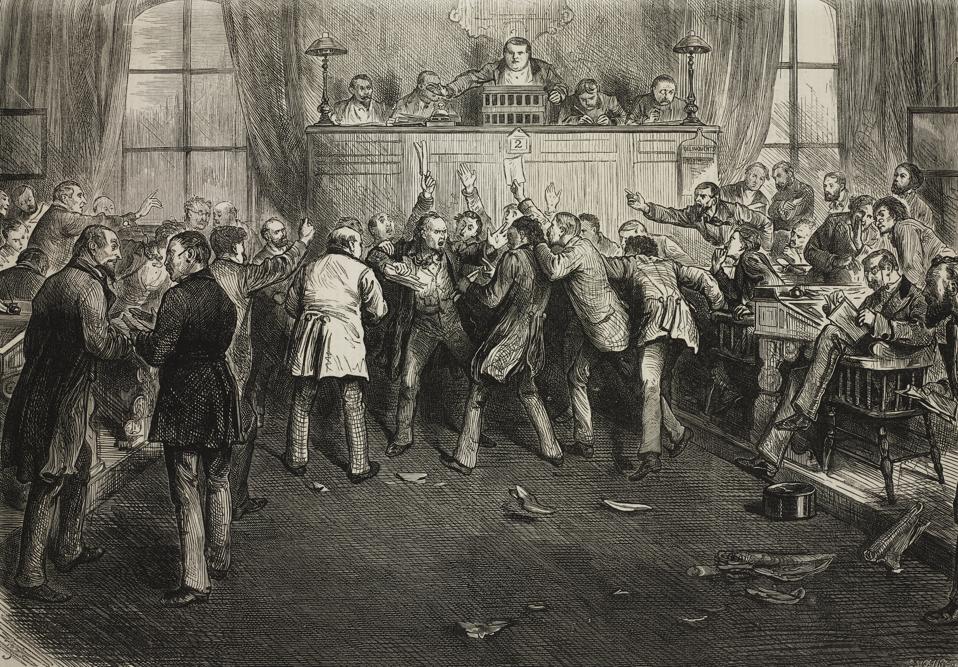 The money market panic in America, scene at the Stock Exchange of San Francisco, United States of … [+] America, illustration from the magazine The Illustrated London News, volume LXIII, October 4, 1873.

After just a few days of financial/economic chaos, I long for the worry I had just a couple of weeks ago that there was growing softness in the U.S. and world economies. That’s now just a distant memory. Most of the recent data is pre-virus, and are generally meaningless. The numbers we will get for March will be awful, but the worst is yet to come. An example of March’s data is from the Philly Fed. The print of their Manufacturing Index was -12.7 for March, down a record amount from the +36.7 in February.  Initial jobless claims for the week ending March 14 (281k) were up 33% from the prior week. This number will get worse, much worse.

Q2 GDP growth will be more negative than any of us have ever seen in our lifetimes. You already know the reasons: a significant percentage of small businesses dealing with the public are shut-down or partially so, and larger (essential) businesses are working with reduced staff or staff working from home. The hardest hit industries are in the travel and leisure space (airlines, hotels, restaurants, casinos, movie theaters, convention and meeting space… The list goes on and on).

Recession with a Capital “R”

It shouldn’t be a surprise to anyone that the Recession started this month, March. Note that I capitalized the “R” word, as this one is going to be faster and deeper than any since the Depression. And, it may rival that. Q2 GDP growth is going to be negative double digits, like -15% or -20%. As outlined above, small businesses are directly impacted, and one can only hope that the fiscal plans being discussed in D.C. adequately include this business segment, else the recovery will be slower than anyone has yet discussed.

The depth and duration of this Recession is going to depend on infection control. In China, the original cases began in December (they didn’t tell the world until late January), and, from the time they quarantined in January, it was about 45 days till their daily infection rate (new cases) declined. In the U.S., once we get enough test kits and get a handle on how many existing cases there are, the key to the length and depth of the Recession will be determined when the daily count of new cases falls on a consistent day-to-day basis. (Hopefully, if we repeat what China did (or better yet, Korea), the case counts will begin falling in late April.)

Meanwhile, the financial markets are in a chaotic state, with liquidity a huge issue. In a Recession, equity prices always fall. And the contraction is between 20% and 50% depending on the recession’s perceived length and depth. Since no one currently has a handle on either of those two parameters, we get 1000+ point swings in the DJIA on a daily basis (down, then up, but more downs).

One big difference in this bear market is that bond prices, which should be going up (and yields down) have also been falling. They took a breather on Friday, March 20, when Treasuries rallied and Corporates stabilized, as the Fed was in the market. In the 10 days to March 18, the yield on 10-Year T-Notes rose at an unprecedented rate (0.34% to 1.25%). Consumer rates, which are often tied to the 10-Year have risen .6 pct. points on auto loans and mortgage backed securities, .6 to .9 pct. points on home equity loans, 1.0 pct. point on muni bonds, and 1.2 pct. points on credit cards.

In a recession, interest rates always fall. The Fed cut the Fed Funds rate essentially to 0% in an emergency FOMC meeting on Sunday, March 15. Given these, why are rates rising?

Here are some reasons:

Such behavior is highly unusual, but not unprecedented. It happens during times of panic selling. Economist David Rosenberg recently outlined four instances over the last 22 years of similar behavior (but not to this extent). The table below uses the 30-Year Treasury Bond (the “Long” Bond) behavior to show initial levels, panic levels, and the ultimate level after the panic had passed.

Behavior of the Long Bond Yield

It should be noted that the table shows the impact of such panics on the Treasury Long Bond. Corporations do not borrow at Treasury interest rates. It depends on their credit rating. At present, with little in the way of visibility for the corporate sector, and as long as the country is in lock-down mode, the spreads of even high quality corporate paper to the Treasury yield curve will stay wider than they were before all this began. Even when some semblance of “normalcy” returns, it is unlikely that they will narrow back to where they were in February. That doesn’t mean there aren’t bargains out there; at least for those investors bold enough to take advantage.

It’s Up To The Fed To Calm The Markets

The Recession will only get worse if interest rates rise! So, it’s up to the Fed to calm the credit markets, and they initially tried to do that by moving the Fed Funds rate to 0%. While many commentators now say the Fed is “out of bullets” because they are at the 0% rate bound, that simply isn’t true. The Fed has a balance sheet that can grow to unlimited size (via QE). There are other methods too, like buying corporate paper or munis. Technically, Congress must approve these, but on Friday, March 20, the Fed found a way around this and purchased assets in the muni market.

During World War II and in the post-WWII period (1942-1951) the Fed targeted yields. The yield on the Long Bond was targeted at 2.50%; and the Fed hardly had to intervene to purchase or sell, as the credit markets enforced the Fed’s dictum (now that’s called “credibility”). The Fed still has this tool in its toolbox to control the yield curve, and, it is my guess that they will employ it.

The Attack on American Oil

To make economic matters even worse, there is an ongoing attack on America’s shale oil industry by Saudi Arabia (SA) and the Russians. The price/bbl. of oil was less than $20 (West Texas Intermediate (WTI)) on March 18th (it was $52+ on February 23). It has since risen, closing at $23.64 on March 20 due to some remarks by the President about intervention. The price has fallen out of bed because along with the rapid falloff in demand caused by the virus, SA decided not only to release its OPEC partners from the 2.1 million bbl. per day reduction that had been in place for quite some time, but to produce more. The $20/bbl. price is significantly under the cost of production in America’s shale industry, whereas the cost of production in SA is only about $9/bbl. While this is not a prime Recession mover, it will add to America’s pain, as production workers in America’s shale areas are laid off.

One last issue remains: how much fiscal stimulus will there be, will it be sufficient, will it be properly targeted, and will it arrive on time? The answer is likely “no” initially, but, eventually, the politicians will get it right (at least that is our hope). Right now, they are talking $1.3 trillion. Likely, that isn’t going to be enough.

Perhaps the Treasury should issue the equivalent of “War Bonds” (which later became “Savings Bonds”), like they did during World War II. These had long maturities. The Treasury, through the banking system, sold them directly to the public. If they were to issue these today at an attractive interest rate (say 2.50%), the Baby Boomers would likely flock to them.

There are more questions than answers, and, at this writing, there is little visibility into the future. Likely still rocky times ahead. Stay Tuned! The world is dramatically changing right before our eyes.

Tax History: When Taxpayers Are Confused About Filing,...