Oprah calls Mehmet Oz “America’s doctor,” and with this first segment of my two-part conversation with him, you’ll see why she’s right about this accomplished and fascinating man.

The Dr. Oz Show has been a television hit for over a decade because of its host’s unique ability to take often complicated medical and health topics and make them readily understandable—and actionable—to everyone. He’s a first-rate storyteller. Countless people have improved their diets and way of living by following his advice. More dramatically, thanks to his presentations about various ailments and their symptoms, many viewers have been able to recognize when they’ve needed medical help and have gone out and gotten it. Lives have thereby been saved.

An acclaimed cardiothoracic surgeon—he has performed over 5,000 operations and counting—Dr. Oz also has notable, life-saving patents to his name, one of which we discuss in this podcast. He is also a prolific author of both professional medical papers and popular books. 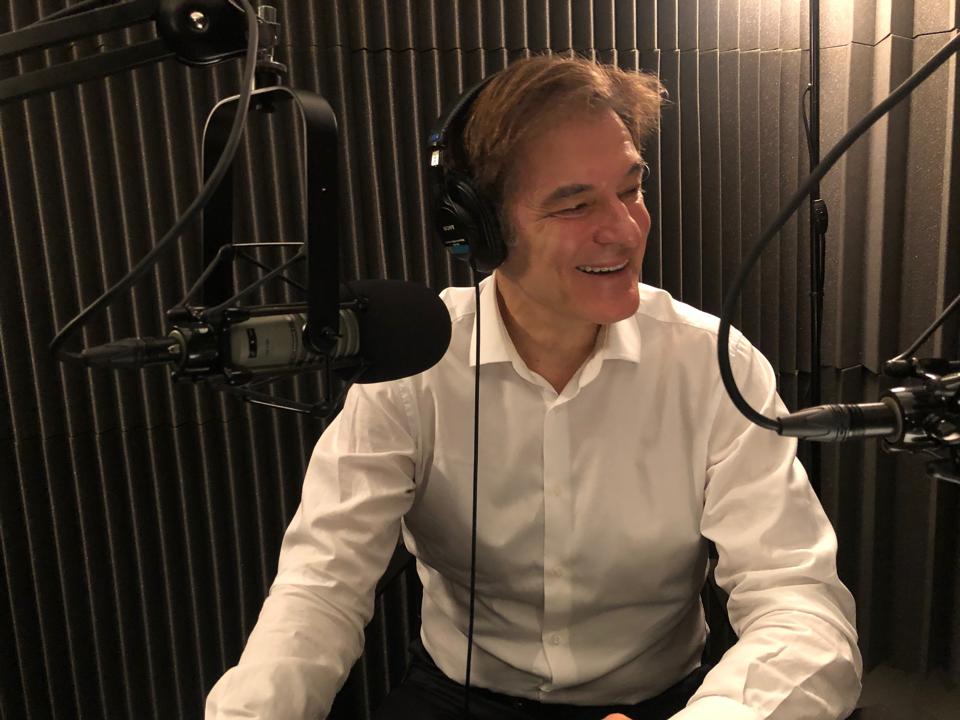 You’ll be fascinated by the wide range of our talk: how Oz decided at age 7 to become a physician; and how hard his father, an immigrant from Turkey who became a cardiothoracic surgeon, pushed his son to excel in school; why Oz decided to simultaneously get a medical degree and an MBA; Oz’s willingness to tackle controversial topics and have controversial guests on his show when he believes the conversation will expose his audience to needed or helpful information; his observations on the woefully underrated importance of people eating meals together; and his thoughts on religion and angels, and on how he has been influenced by the writings of Emanuel Swedenborg, an 18th century Swedish scientist, philosopher and theologian.

And extremely relevant at this time of year, you’ll want to listen to Dr. Oz’s insights on the proper way to make New Year’s resolutions that you can keep!

On Inventing the MitraClip

“So I was the second-to-last speaker. I hung around for the last speaker. And that changed my life, because the last speaker, a guy named Ottavio Alfieri, just a fantastic human being, who was a pioneering surgeon, had radically conceived of an operation that he’d started doing in Italy. And Italians are great designers; they understand structure. The mitral valve is a unique structure, because it’s named after the pope’s hat, the mitre—it’s shaped like that. But if that mitral valve leaks, you die of heart failure, eventually. And it’s still a major problem in this country. So he’d come up with this idea of one single stitch to fix the valve. And I remember getting on the plane on the way home thinking, ‘My goodness. One stitch’ So it occurred to me if he could fix a valve with one stitch, maybe I could do it without stoppin’ the heart. Take it to the next level, right? ‘Cause it is like operating inside of a car engine. If it’s moving around, all those pistons and belts, it’s hard to fix things. But one stitch? My God. I mean, I could do that. So I wrote a patent on the plane ride home.”

On Telling the Truth

“[In] medicine, when you don’t tell the truth, people die. It’s an interesting shift for me, to move outside the hallowed halls of Columbia University, the ivory tower, where that’s established and understood, to a more public setting, where often times people don’t tell the truth. It’s not ’cause they don’t wanna tell the truth. They’re scared. They’re worried they’ll be ostracized, which is a horrible thing you do to people, and blocks them from feeling a part of community. That’s how we would essentially kill people in the old days, right? Just ostracize them. Don’t talk to them. Pretend they don’t exist, and they wouldn’t after a while. But when you hear people saying things that are not comfortable to hear, but there’s wisdom there, the least I wanna figure out is what they mean.”

“If I can give you one little bit of advice about medicine? When things have been around for thousands of years, there’s somethin’ there. […] So New Year’s resolutions are 2,000 years old. The Romans spoke about them. So there’s something goin’ on about New Year’s resolutions. Here’s the data. First off, if you actually make a New Year’s resolution, your chance of changing is dramatically greater than if you whimsically just say, ‘I’m gonna do something different this year.’ So literally make one. But you gotta make it the right way. The first thing you gotta do is make sure it’s concrete. Very specific. ‘I’m gonna lose ten pounds by March the 1st, and I’m gonna do it with these tactics. […]’ And then it has to be a reasonable goal. And the only way to lose 50 pounds in a week is to take off a leg. So don’t try to do something that’s undoable.”

The Wayward One: Spurs’ Deepening Off-Field Crisis Will...