Breaking
Everything You Need to Know About Corporate Social...
Is Adaptive Leadership the Key to Motivating Employees?
Why business events are set to return with...
Business events set to return with a bang!
Expanding Internationally: 5 Things to Consider for eCommerce...
How the Machine Shop Is Going Digital in...
Sustainable Food Packaging Is Helping the Hospitality Sector...
Top 5 Investment Practices To Make More Money...
Managing IT Requirements for SMEs: 5 Aspects that...
How To Build a Successful Luxury Brand In...
Finding The Best Google AdWords Consultant for Your...
8 Top Tips To Help Your Agricultural Business...
Three Reasons Why Office Décor and Design Are...
Looking To Improve Efficiency In Your Business? Here’s...
AI and machine learning for business
How Social Media Changed the World
Home Business The Rockies Fully Expect Kyle Freeland To Rebound From An Awful 2019 Season
Business 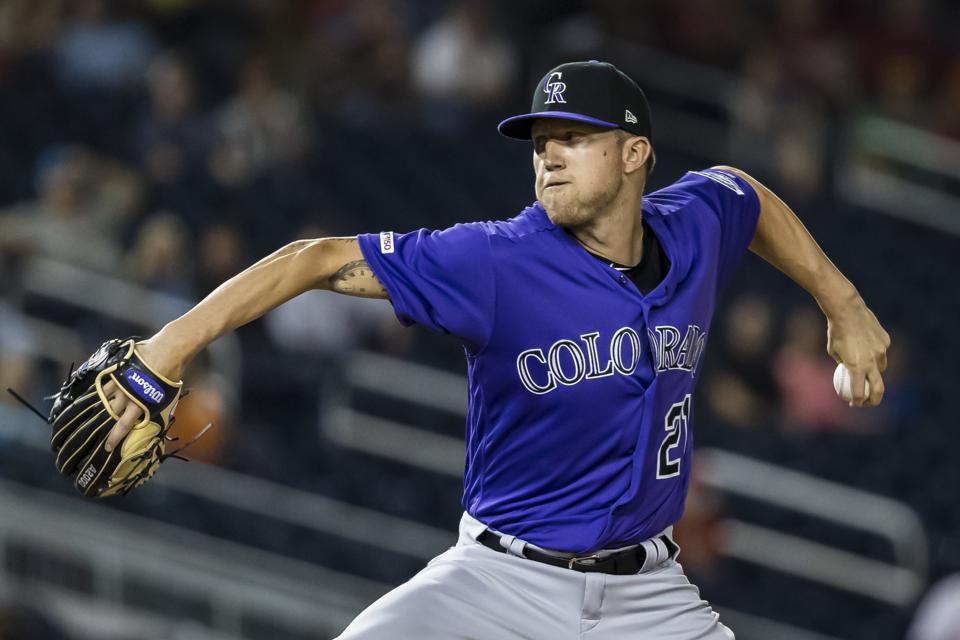 WASHINGTON, DC – JULY 24: Kyle Freeland #21 of the Colorado Rockies pitches against the Washington … [+] Nationals during the first inning of game two of a doubleheader at Nationals Park on June 24, 2019 in Washington, DC. (Photo by Scott Taetsch/Getty Images)

These have been the earliest returns for Kyle Freeland, bullpen sessions before spring training with no hitter poised at the plate ready to swing in earnest. Nothing definitive.

But considering the depths to which Freeland plummeted last season, considering how important he is to a Rockies revival this year and considering the significant change Freeland is making to his delivery during this offseason, the favorable signs from these bullpen sessions at the Rockies complex in Scottsdale, Ariz., do matter.

What manager Bud Black lyrically called “that flamingo pause” when the left-handed Freeland lifted his front leg high and stopped before planting it and coming down the mound is gone.

“It’s really helping him be more efficient,” said Steve Merriman, the Rockies’ pitching coordinator for their upper minor league levels. “When you can move more efficiently, you can repeat that movement more often. You can locate (the ball). You know where it’s going.

“Obviously, it’s early. Location isn’t always the relevant piece at the start of these things. But he looks free. He looks athletic. Just his ability to start to do some things that he wants to do with some pitches has been pretty evident. It’s been good. It’s him; it’s who he is.”

Merriman and bullpen coach Darryl Scott have been working this offseason with Freeland. His delivery has been the top priority. Additionally, Merriman is particularly well-versed in analytics and technical tools that can help pitchers. Black said Merriman has started working with Freeland on the spin rate of his breaking pitches.

The Rockies declined to be more specific on Merriman’s involvement regarding analytics and Freeland.

“We’re using all the things that everyone is using,” assistant general manager and player development director Zach Wilson said. “So Rapsodo and Edgertronic Cameras and TrackMan and all the things that you hear about, we’re utilizing that, always. It’s really how you use the information and what information that you’re using that is sort of the proprietary secret sauce.”

Freeland, 26, rapidly ascended in 2018, his second season with the Rockies, going 17-7 with a 2.85 ERA and taming Coors Field with a 10-2 record and 2.40 ERA. Those ERAs were franchise records for a full season and resulted in Freeland’s fourth-place finish in the National League Cy Young Award voting.

He then endured a miserable 2019, a season that included a demotion to Triple-A Albuquerque for six weeks at the end of May and ultimately a 3-11 record with a 6.73 ERA. Bad as that season would be for any pitcher, particularly one coming off such lofty heights, it was even more nightmarish for Freeland, since he was born and raised in Denver, grew up a Rockies fan and was their first-round pick in 2014.

“Being in the position that I am, you never want to ultimately let down your city,” Freeland said. “I kind of wear that on my shoulder. Denver’s a place I’m proud of. I’m proud to play for this organization. These changes that I’ve made, hopefully they’ll start paying off, and we’ll start seeing some positive things, especially once I start facing hitters when we get camp going and then get into competition and hopefully see it really pay off.”

Ditching the leg pause in his delivery will not mean having to alter years of muscle memory. Freeland said his windup was “one fluid motion” before he began incorporating a pause in 2017, his rookie season with the Rockies.

After that season, Freeland worked extensively with Scott – their history goes back to late June 2016 when Freeland was promoted from Double-A Hartford to Albuquerque where Scott was the pitching coach _ to eliminate a toe tap that followed the pause. And the result was Freeland’s sublime 2018 season.

But now after three seasons with the Rockies where Freeland threw every pitch with a pause of some sort, his delivery will look considerably different.

“The whole reason for that pause was to keep my load on the back side and keep me from drifting down the mound,” Freeland said. “Now that we’ve kind of solidified myself being able to do that and being the athlete that I am, we can go back to having a fluid motion and working from there and making everything repeat a lot easier.”

The Rockies lost 91 games last year in large part due to a rotation that sustained numerous injuries and finished with a major-league worst 5.87 ERA, the second highest in franchise history. Freeland’s revival could go a long way toward rectifying that situation. He figures to join a rotation that includes Jon Gray, German Marquez and who?

Maybe Chi Chi Rodriguez. Maybe Antonio Senzatela. Maybe, and this would be nice nostalgic touch, 36-year-old Ubaldo Jimenez. He last pitched in the majors in 2017 and last pitched for the Rockies in 2011 but has returned to the organization where he began his career. The Rockies announced Wednesday that Jimenez signed a minor league contract and will be a non-roster invitee in big league camp next week.

In Freeman’s case, it’s not about nostalgia and summoning anything from the distant past but more about changes that will enable him to forge ahead. Black is confident Freeland will rebound because of “a momentum-building delivery,” a better understanding and use of analytics as well as his stuff, his desire and the learning experience that was his miserable 2018 season.

“He’s healthy, he feels good, he’s a confident, convicted pitcher,” Black said. “I think just things line up for him to bounce back. Do we know what the numbers are going to be? If he stays healthy, he’s going to be a major contributor.”

And that would do wonders for the Rockies’ fortunes this season.

Feeling Stressed? Laugh It Off With These 7 Business Books

Are We Paying Enough Attention To Our Cyber Security?