Breaking
Everything You Need To Know About EMI Option...
Social Security’s Government Pension Offset (GPO)-A Common Sense...
5 Practical Tips for Small Businesses Going Through...
Part II: How To Optimize Product Ownership In...
How Zoom Conquered Video Conferencing
How To Meet Customer Expectations This Holiday Shopping...
A Technology Solution For Muni Bond Disclosure
Five Common Ways To Fund A Small Business...
Your Floss Pick Habit Is Killing The Planet,...
Customer Service Recovery: Six Keys To Turn Complaints...
10 Unique Habits To Positively Impact Your Productivity
How Becoming A Learning Organization Is Key To...
IRS Increases Enforcement On Cryptocurrency: What This Means...
Optimus Prime Finally Gets The Diaclone Update He...
No, There Isn’t A Black Hole At The...
The Fed Could Be Repeating This Key Mistake...
Home Business The Room Where It Happens—Life In A Basketball Centric Conference
Business

The Room Where It Happens—Life In A Basketball Centric Conference 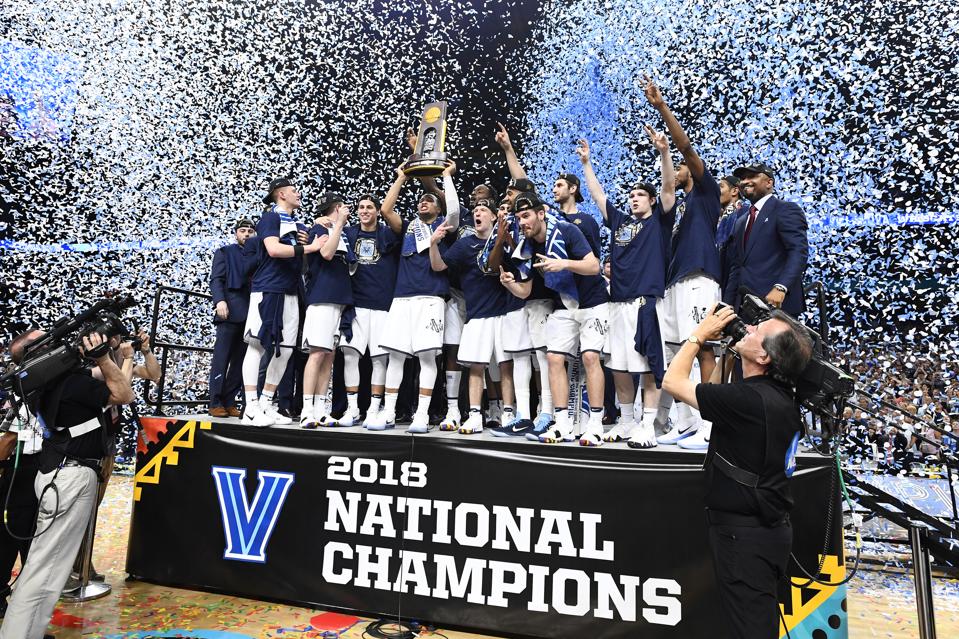 Now that basketball season is here, those who follow college athletics are awaiting the conference tournaments and Selection Sunday. For so many schools, the chance to salvage a poor season through redemption in the conference tournament keeps players and fans engaged through the long slog of February games.  Come March, it seems like the whole world is talking college hoops. For conferences who don’t have football, their teams are laser focused on win and advance-in the NCAA men’s basketball tournament.

Beyond the wins and losses, the financial underpinnings of NCAA March Madness are well known. Originally signed in 2010, CBS and Turner Sports extended their $8.8 billion contract through 2032, guaranteeing the vast majority of NCAA revenues to Divisions I schools at a critical period. ‘Basketball centric’ conferences, by definition, don’t have football revenues to access; in addition, the vast majority are private schools. Most count on student fees and institutional subsidies to pay for their athletic programs. A reliable revenue stream from the NCAA and the conference is critical. 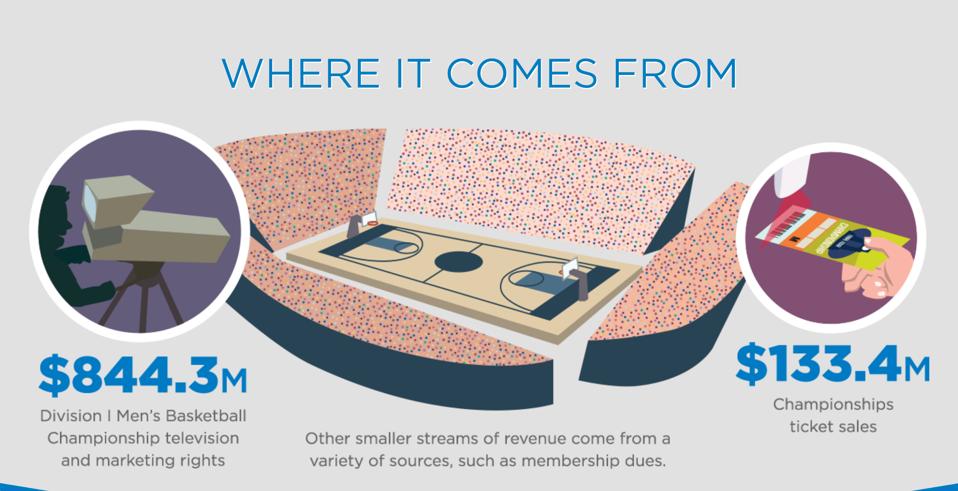 NCAA revenues–where does the money come from?

So, how are the revenues distributed for conferences focused on basketball?

An example can be found in the NCAA’s recent reporting of the finances of college athletics –in basketball centric conferences, median expenses outpaced generated revenues by $13.3 million. Within this grouping, the average institutional subsidizes for the athletics budget is 62%, primarily with tuition and fees (and potentially government subsidies in some states).

First, the NCAA identifies specific funding for the “Basketball Performance Fund”. This fund is distributed to Division I conferences and independent schools based on their performance in the men’s basketball tournament over a six year rolling period.

Second, and beginning in 2019-20, all Division I schools will be eligible for additional funds called academic enhancement funds. The NCAA describes them this way: “The first six years of the new distribution starts in the 2019-20 academic year, 75 percent of the annual increase in the broadcast rights contract will be used to create an academic distribution unit, similar to the units now associated with the Division I Men’s Basketball Championship. Currently, conferences earn units for each game that member schools participate in during the championship. After the first six years, the percentage of growth allocated to the academic unit will equal the percentage applied to all other distributions. “

In short, the basketball centric conferences are included in the revenues received from the NCAA to supplement their graduation and athlete wellness efforts, an important financial boost to schools already struggling with where the money comes from.

Third, there is another strategy to secure access to the NCAA tournament by these conferences. Leagues like the Big East, Atlantic 10, the Ivy League and others work to create efficiencies within their membership. They look to negotiate conference television contracts, which can get a little contentious when someone decides to leave (see UCONN) . In addition, basketball conferences have put together extensive streaming deals with ESPN+ to broaden their exposure. 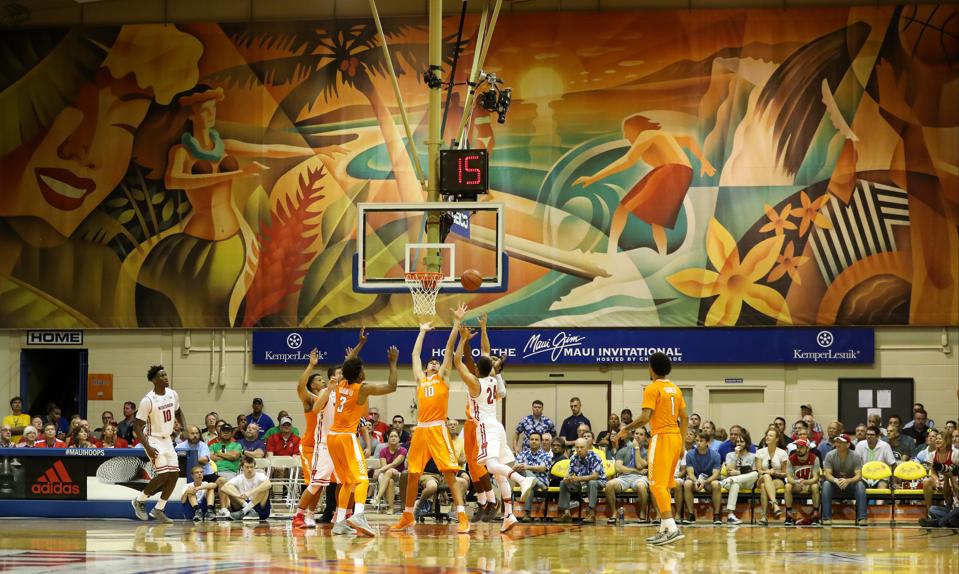 LAHAINA, HI – NOVEMBER 21: Game action during the second half of the Maui Invitational NCAA college … [+] basketball game between the Tennessee Volunteers and the Wisconsin Badgers at the Lahaina Civic Center on November 21, 2016 in Lahaina, Hawaii. (Photo by Darryl Oumi/Getty Images)

Fourth, and to enhance the exposure, commissioners work to schedule the best non-conference games.  Pre-season tournaments played in exotic locations (Maui Invitational, anyone?) allow teams to get early season national television exposure. One or two non-conference upsets can, and do, occur, putting the basketball conferences in a good position heading into the first set of regular season rankings.

There are challenges with this. Retired Ivy League Commissioner Jeff Orleans told me, “A conference’s number of NCAA teams, and how far any conference team advances, are the two most important measures of basketball success in terms of public recognition, recruiting coaches and athletes, scheduling, and securing tv coverage. Unfortunately the NCAA’s selection approach means that success in both of those areas depends on the willingness of the “major” conferences to schedule their decreasing number of non-conference games against other conferences, instead of against each other.” Coaches and Commissioners can work together, says Orleans, to try to create scheduling criteria for the league, again to enhance the overall league strength of schedule.

Fifth, selecting teams to the NCAA tourney has always been contentious –who’s on and off the bubble counts for hours of speculation and angst. Saying goodbye to the much criticized RPI index, the NCAA introduced the NCAA Evaluation Tool (NET) Rankings in March 2019, and according to NCAA.com, “game results, strength of schedule, game location, scoring margin (capping at 10 points per game), and net offensive and defensive efficiency” are the indicators.

Head Men’s Coach Bill Coen at Northeastern (a member of the Colonial Athletics Association) observed the NET is “another step in the process of everyone understanding what a tournament-worthy resume looks like.” In a recent NET rankings from January 11, 12 of the top 50 schools come from basketball centric conferences.

Bringing it to the campus level, Mark Reed, President at Saint Joseph’s University  (SJU) in Philadelphia, told me the presidents and commissioners do discuss the challenges of orchestrating selection and advancement in the NCAA tournament while competing in a “non-football” conference. Presidents function as the “Board of Directors”of the Atlantic 10. 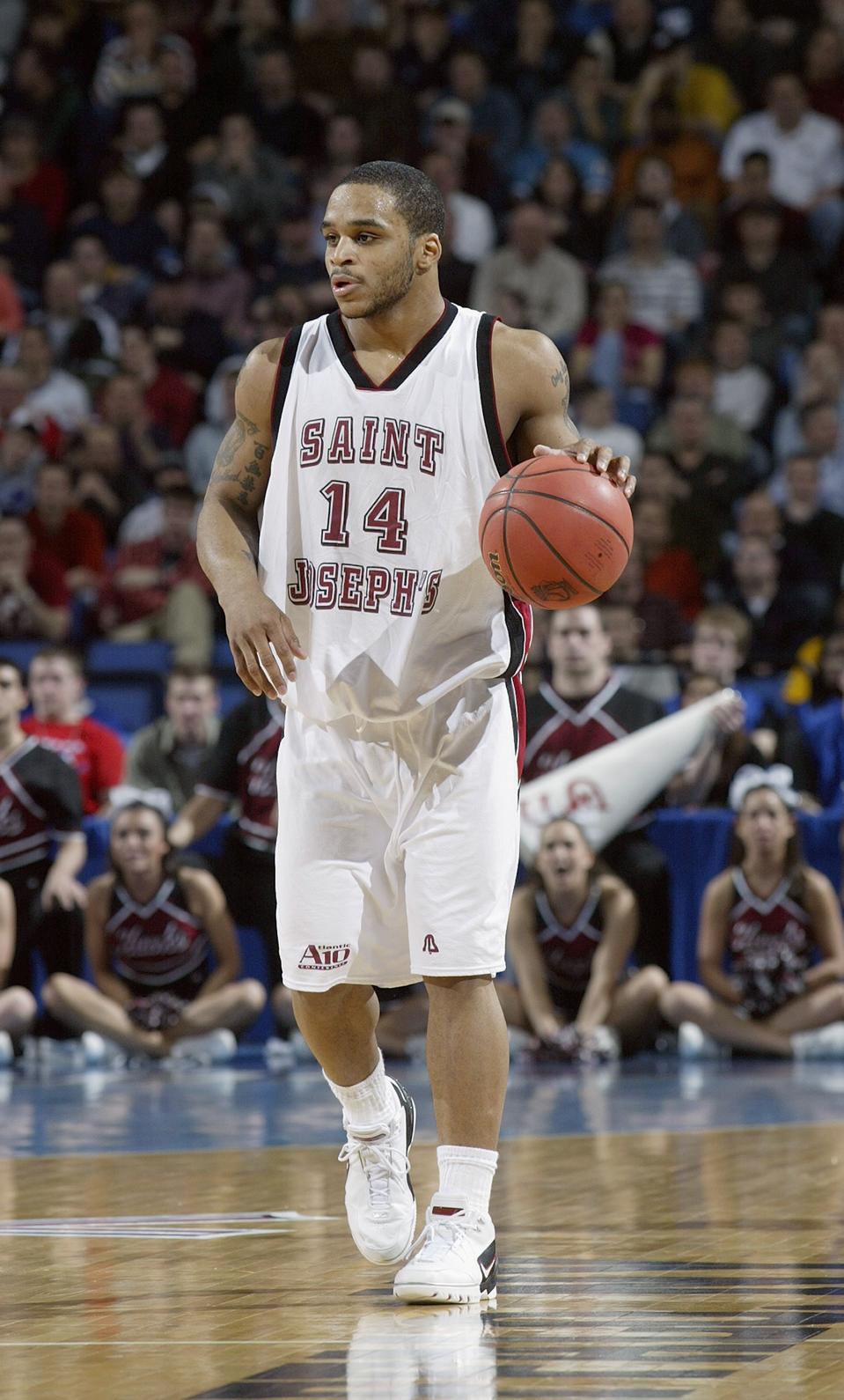 BUFFALO, NY – MARCH 20: Jameer Nelson #14 of the St. Joseph’s University Hawks moves the ball … [+] during the second round of the NCAA Men’s Basketball Championships against the Texas Tech University Red Raiders at HSBC Arena on March 20, 2004 in Buffalo, New York. The Hawks won 70-65. (Photo by Rick Stewart/Getty Images)

For those of you who don’t know about Saint Joseph’s, basketball junkies will be happy to tell you about the  2003-2004 men’s basketball season. The Hawks ended the regular season undefeated and ranked number one in the polls. They earned a number one regional seed, and advanced to the Elite Eight in the NCAA tournament. They lost twice that entire year—once in the Atlantic 10 Conference tournament, and once in the NCAA tournament, ending the season with a remarkable record of 30-2. “Hawk Hill” had never seen the kind of excitement that men’s basketball run had brought them.

That magical season, and the strong connections between team members, was brought back to the national limelight this week with the viral video showing former star and veteran NBA player Delonte West in clear distress, sitting in handcuffs on a street in Washington, D.C.. Immediately, the Saint Joseph’s basketball community and the NBA player’s association jumped into action to support and help West. Friend and teammate Jameer Nelson, former Hawks head coach Phil Martelli and more reached out via social media and through other channels to let him know they were there for him. Former Athletics Director Don DiJulia told the Philadelphia Inquirer: “My first reaction when I heard (Monday) night — one thing we can all do is start with prayer.” The intensity that magical season created is alive today— few teams at any level have felt that kind of bond. For a school the size of Saint Joseph’s, the experience was like catching lightening in a bottle. 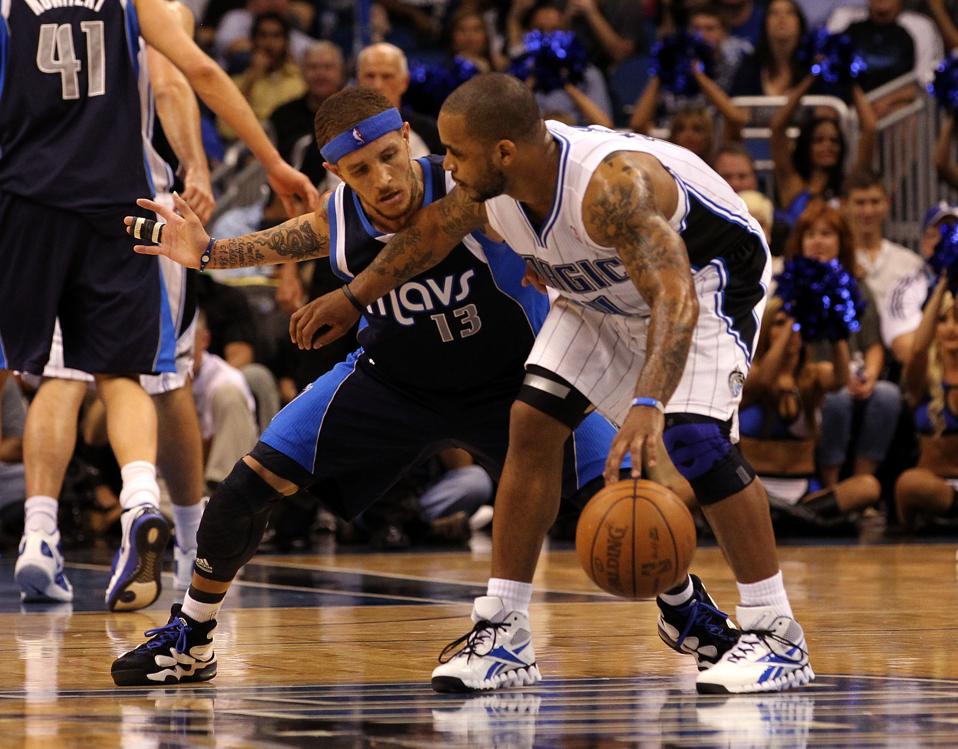 ORLANDO, FL – MARCH 30: Delonte West #13 of the Dallas Mavericks guards Jameer Nelson #14 of the … [+] Orlando Magic during the game at Amway Center on March 30, 2012 in Orlando, Florida. NOTE TO USER: User expressly acknowledges and agrees that, by downloading and or using this photograph, User is consenting to the terms and conditions of the Getty Images License Agreement. (Photo by Sam Greenwood/Getty Images)

The realities of any school like Saint Joseph’s repeating that magical season even every five years is a stretch, and to expect that kind of success to translate financially every year would be foolhardy. That being said, those small to midsize schools who play in basketball centric conferences like the Atlantic 10 and the Big East have a different focus—to work together to ensure strategic success in men’s basketball for all teams.

To ensure they had control over future decisions, the A10 presidents argued they wanted a permanent seat at the table. Initially, the A10 was only included on a rotating basis with other non-football conferences. Knowing the powerful NCAA Governance Committee provided access to key decisions, including how March Madness revenues are shared, their view was that it was vital they be “in the room where it happens”. 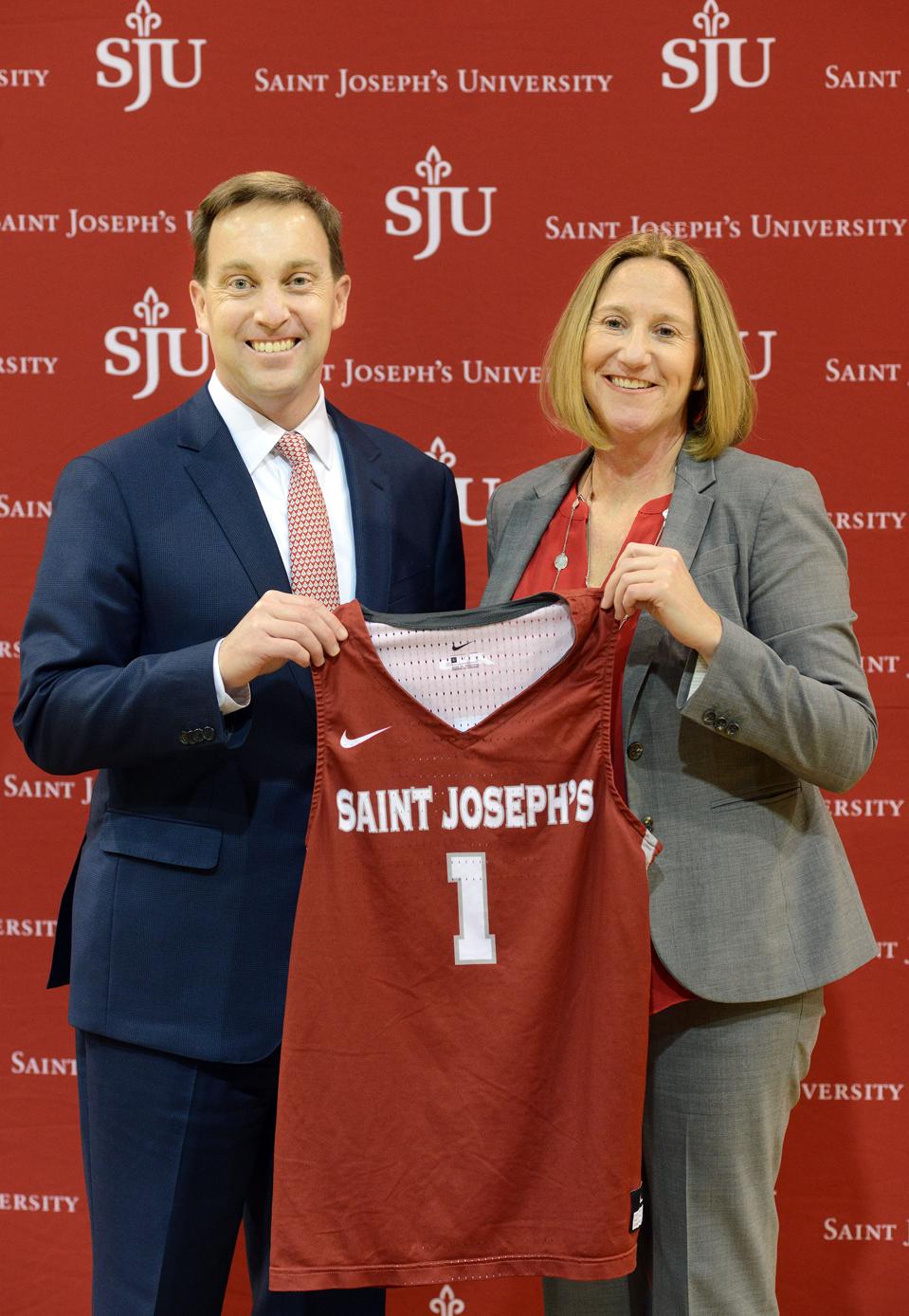 Reed, the SJU President, described it this way on my podcast:

“A few years ago, changes were happening in the Division I governance structure. The model evolved from one school, one vote to another model that, theoretically, had full participation by all conferences in the governance matters. (However), certain schools were going to have permanent seats, and certain conferences would have rotating seats. We (the Presidents) made the strategic decision that the Atlantic 10 needed to articulate why, as a basketball centric conference, we deserved consideration for a permanent seat at the table. Those are the kinds of things that presidents can do, really strategic issues, challenging the conference, challenging our thinking, raising the bar and the expectations.”

Years ago, conference membership depended on geography—if your state boundaries were adjacent, it made sense to be in the same conference. Travel time was paramount. No more. Today conferences are thinking much more strategically, all in an effort to secure more revenues and exposure. Example: the Big Ten adding Maryland and Rutgers. In men’s and women’s basketball, Maryland leaving the ACC seemed ridiculous, especially with the competitiveness of the conference in basketball. But the Big Ten looked at Maryland and Rutgers as anchors to larger TV markets, with wider coverage for all sports.

Tactically, Reed described the thinking for the Atlantic 10 similarly; “I will say that conference membership is very important strategically, to not only St. Joe’s but to all members of the Atlantic 10. (Unlike) maybe 30-40 years ago, even 20 years ago, (membership) was geographic. We were aligned (in our institutional missions and strategic plans). We’re bound (today) together in ways that perhaps weren’t originally envisioned when the conference came into existence. But now we have to make sure as a conference, we’re all kind of rowing our boats in the same general direction….  It’s all about enhancing the basketball profile of the conference.”

It’s all about being in the room. When you got skin in the game, you stay in the game.

Corruption Is Easing In Some Unlikely Corners Of The Middle East, Says Report On Global Graft