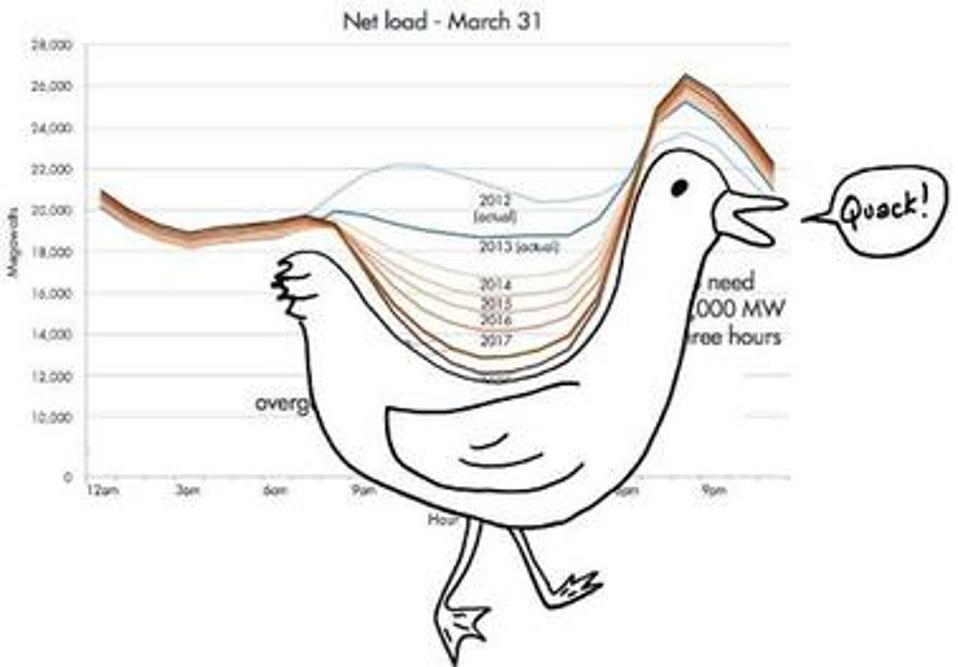 The deepening duck curve has big implications for the future of renewable energy.

California’s Antelope Valley sits at the edge of the Mojave Desert. In recent years, the desert has seen a farming boom, solar farming that is. Antelope Valley is home to America’s largest solar facility, Solar Star, a sprawling 3200-acre, 579-megawatt complex. Solar Star’s 1.7 million crystalline silicon panels were produced by SunPower and are operated by BHE Renewables, a Berkshire Hathaway company. Around the world, even larger projects in China and India reflect the astonishing growth of solar photovoltaic (PV) power generation.

Solar power has exploded in the past decade, far outstripping energy analyst estimates. In 2020, the world is expected to install 142-gigawatts of solar energy, seven times 2010’s total capacity. From 2010-2019, 638-gigawatts of solar power was installed worldwide, exceeding installed capacity of any other energy source, including coal, oil, and gas. Solar power’s rapid deployment has been driven by impressive public and private investment in renewables. These investments have enabled innovation and scaling that has reduced the solar power costs by over 80% since 2010. Falling costs have made solar competitive with fossil fuels. In India today, solar generation is often cheaper than coal. That nation plans to generate 100-gigawatts of solar power by 2022.

Despite this impressive growth, the solar revolution still has a long way to go. In late 2018, the Intergovernmental Panel on Climate Change (IPCC) released a report on the impacts and feasibility of limiting global warming to 1.5 ºC. The IPCC suggested that exceeding 1.5 ºC of warming would create major economic and environmental challenges. Staying below that threshold demands a rapid reduction in greenhouse gas emissions, nearly 8% annually. Nearly all energy pathways that will limit warming to 1.5 ºC require carbon neutrality by 2050. Only a dramatic shift away from fossil fuels will make that goal a reality.

Although the International Energy Agency (IEA) has consistently increased projections for solar and other renewables in its World Energy Outlook, renewables growth appears to be complementing rather than displacing fossil fuels. Under current national and international policies, the IEA projects major increases in solar PV generation. However, “stated policy” projections also suggest continued growth for fossil fuels (particularly natural gas). Climate change demands that solar PV go from a bit player in today’s energy mix to a leading role. Standing in the way of that transition is a duck.

Stuck with a duck

No ordinary duck, of course. This duck was first spotted by the California Independent System Operators (CAISO), managers of California’s electric grid, as they examined the state’s electricity production and demand. Electricity demand varies during the day, rising as people wake up, flattening around noon, rising again when people return from work, and falling at night. These ebbs and flows in demand are also impacted by heatwaves and cold snaps, and even by holidays. Over the decades, electric grid managers have learned to anticipate demand patterns and can raise and lower production accordingly. This management is important as insufficient supply means customers will lose power while oversupply is both economically wasteful and damaging to the grid.

Solar power adds a new dimension to these calculations. Unlike coal, nuclear power, and natural gas, solar power is “non-dispatchable.” That means it cannot be ramped up or reduced at will. Instead solar power generation depends on the weather, the season, and the time of day.

Solar’s intermittency means that electric grid managers must rethink how to utilize their conventional power plants. The more solar generation occurs the lower the demand for conventional power, called “net load.” On a typical day, a graph of the net load looks like a duck. In the morning, net load falls as more solar power comes online (the duck’s tail). Net load bottoms out around midday when the sun is strongest (the duck’s belly). Then, in the early evening, net load rises quickly as solar generation declines and overall energy demand increases (the duck’s neck). Finally, net load falls as people go to bed (the duck’s head).

The friendly duck poses a big headache for grid managers. Base-load power plants (e.g. coal and nuclear) were built to run continuously. Shutting them down during midday and then running them at full capacity in the evening is difficult and expensive. Grid managers often rely on natural gas “peaker” plants that are designed to ramp-up faster. However, many gas plants idle for long periods and then rapidly ramp-up, which is economically inefficient for power producers and consumers alike. Furthermore, large swings in net load can damage grid infrastructure. A suboptimal solution has been to “curtail” solar. Curtailment limits the amount of solar power entering the grid in order to smooth out net load. This results in large amounts of wasted power. Unfortunately, as solar’s share of electricity generation grows, these problems can intensify. The duck’s belly gets deeper and its neck gets longer.

While there are real challenges to expanding solar PV use, there are also many effective solutions that can be deployed together. First, net load can be flattened out by creating a bigger grid. Connecting grids allows solar generation in more places, resulting in more consistent production. A large enough grid can also smooth out the timing of demand peaks.

Changing market incentives will also help. At present, consumers and businesses pay for electricity at an average price. However, electricity’s spot price varies wildly due to changes in supply and demand. A smart grid with real-time pricing would charge more for evening electricity when demand is highest. That price signal could push people to reduce consumption at more expensive times, somewhat mitigating the demand spike. Similarly, real-time pricing would enable users to sell power to the grid at a fair price, reducing overproduction during electricity gluts.

Real-time pricing can also be joined with efficiency programs. That can mean purchasing more efficient products, which do more with less energy. Americans have been doing this for years. Since 1980, America’s GDP has grown nearly 200% while energy use has risen less than 50%. Efficiency gains reduce the strain on grids and save consumers billions annually. On the production side, grid managers can use big data and machine learning to better anticipate supply and demand shifts.

Finally, batteries are one of the most promising methods for cooking the duck. New battery technology now enables far greater energy storage at affordable prices. Better batteries have enabled Tesla and other electric vehicles (EVs) to become economically viable. In the past decade, battery prices have fallen by nearly 90%. However, many experts believe that is just the beginning. A Wood Mackenzie report anticipates over 1300% growth in electricity storage between 2018 and 2024. UBS analysts estimate that the electric storage industry could be worth nearly half-a-trillion dollars by 2030. If the 2010s were the “solar decade,” then the 2020s are likely to be the “battery decade.” Such development would allow solar producers to store energy and release it to the grid when needed, solving the duck problem once and for all.

How To Make And Evaluate A Good Startup Culture?