Drowning in student loan debt isn’t fun, and that’s especially true when you realize there are so few ways to dig yourself out. You can pay off your loans the hard way, forking over a significant portion of your income over ten years with a standard repayment plan. You can also opt for a loan forgiveness program like Public Service Loan Forgiveness (PSLF) and be required to work in a handful of specific public service positions that may not be ideal, then maybe have your loans forgiven after ten years. While PSLF is a good idea in theory, it’s hard to be excited about it when only a small percentage of applicants are actually approved.

But, what about income-driven repayment plans? These plans, which include Income-Contingent Repayment (ICR), Income-Based Repayment (IBR), Pay As You Earn (PAYE), and Revised Pay As You Earn (PAYE), let you pay a percentage of your discretionary income for 20 to 25 years before forgiving your remaining loan balances. Beyond the lower payment you can enjoy for most of your adult working life if you qualify, you don’t have to work in a specific job or for the public interest with these plans. 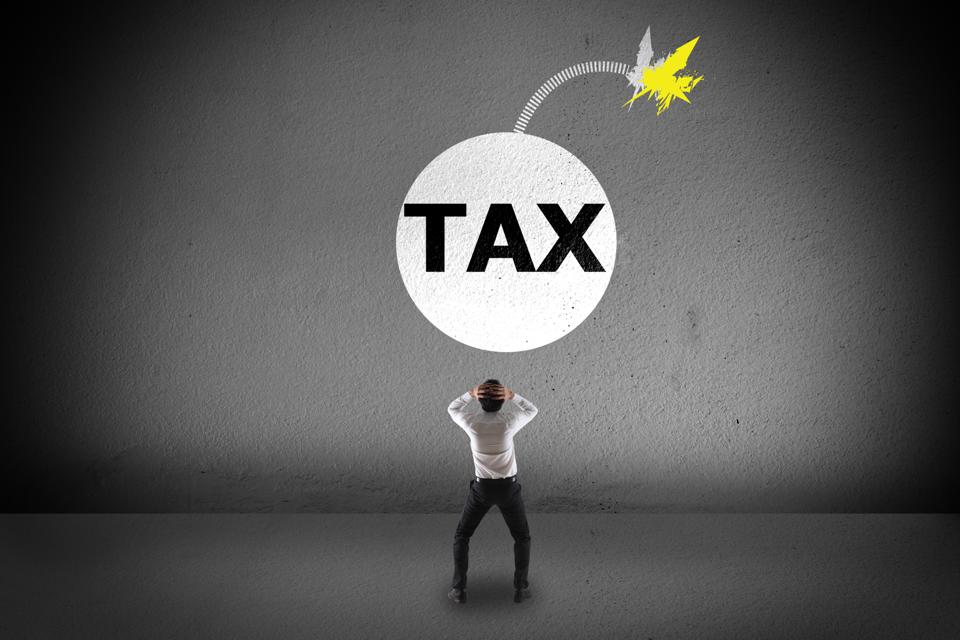 How Much Will The “Tax Bomb” Cost You?

Today’s version of yourself may think paying a small percentage of your discretionary income for the next 20 to 25 years sounds wonderful, but what about your future self? By the time actual loan forgiveness rolls around with these programs, you could regret your choice in a major way. That’s because, during the year your debt is forgiven, the forgiven debt is treated as taxable income (as of today’s tax law).

Unfortunately, it’s hard to know how much you might have to fork over. How much you owe in taxes the year your debt is forgiven will depend on a variety of factors including how much you earned that year and your current tax rate.

Depending on your situation, you could wind up owing more than you think. According to the Institute for College Access and Success (TICAS), a small business owner with $50,000 in student debt who is married with two small children might have to pay $13,050 in additional income taxes in the year their debt is forgiven. In another example, a divorced social worker with two children and $55,000 in debt might pay as much as $19,000 in additional federal taxes during the year their loans are forgiven.

There are a few reasons this could be considered unfair. First, having your student loans forgiven isn’t exactly a windfall. You don’t actually have your hands on the forgiven cash, so this means having to dip into savings and investments in order to pay an inflated tax bill.

Also remember that income-driven plans don’t necessarily save you money on your student loans to begin with — they simply spread out smaller payments over an enormous timeline of 20 to 25 years.

Plus, if your payments are exceptionally low, it also means your income is low – and you likely didn’t have much of an opportunity to save over the years of repayment to have the extra cash to cover the tax bill.

In several examples TICAS shares in their recent study, income-driven repayment plans cost student debtors significantly more money in the long run. The married small business owner with two children we mentioned is one of them. As TICAs lays out, this mythical person with $50,000 in student loan debt would:

With a standard, ten-year repayment plan, on the other hand, they would likely pay the entire loan balance plus $19,050 in interest over 120 months, which would leave them debt-free at least ten years sooner. Standard repayment would also save them from having to face the student loan forgiveness tax bomb. Of course, their monthly payments would obviously be higher along the way, which may not be tenable for everyone.

If you have significant student loan debt and you’re worried about having to pay a huge tax bill later in life, it’s possible that being insolvent could help you avoid it.

Insolvency is a tax term used to describe situations where your liabilities (amount of money you owe) exceed your assets. If you’re able to prove you are insolvent at the time your student loans are forgiven, it’s possible you can avoid the tax bomb altogether.

Here’s a good example of how insolvency might look considering an average person’s assets and liabilities:

Also keep in mind that you can qualify for partial insolvency if you have significant debt and few assets but you aren’t entirely insolvent. In this case, you would only pay income taxes on the portion of your debt that exceeds your assets. This means you won’t escape the tax consequences of forgiveness completely, but it can certainly help decrease your burden and make it more bearable.

Time May Be On Your Side

At the end of the day, all of this is hypothetical. If you’re planning to pay your loans off with an income-driven repayment plan over the next 20 to 25 years, you can only speculate on what your financial situation will be by the time your tax bomb hits. You may be doing so well financially that you couldn’t care less about the tax bill, or you might be entirely insolvent and never have to pay a dime. It’s hard to plan for something so far away when you don’t have an inkling of where you’ll be by that point in your life.

Also remember that a few decades is a long time. If you believe Democratic Presidential candidates, then complete student loan forgiveness could be a reality long before your income-driven repayment plan ends.

Some states, including California, have even passed legislation to address this tax penalty at the state level. It’s possible that, over the next few decades, more legislation will be passed by states and even the federal government that could potentially lessen the tax burden for individuals who have made a faithful effort to repay their loans.

Should you worry about the student loan forgiveness tax bomb? It’s okay to keep this potential issue in mind, but I don’t think you should avoid income-driven repayment plans based on tax implications that may or may not play out in 20 to 25 years. Income-driven repayment plans can make paying your student loans off considerably more affordable for decades to come, and that could mean a much higher quality of life for the foreseeable future.

I suggest doing what’s best for your finances and your life while you’re young. If the tax bomb seems inevitable a few decades from now, you can deal with it then. The worst thing you can ever do is avoid making student loan payments altogether.

China Coronavirus Recovery Pushed Out To May