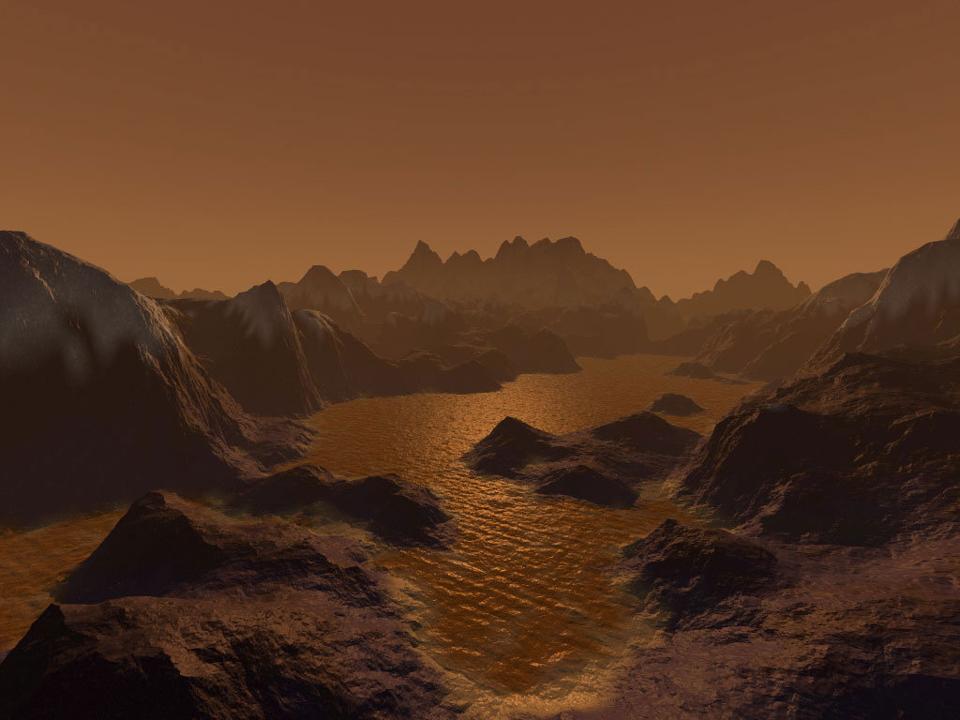 An artist’s conception of what life on Titan is life (assuming you could stay alive).

Atmospheres are very peculiar in the solar system, at least for rocky planets. Most of the worlds in our interplanetary backyard are barren rocks, exposed to the harsh realities of the cold vacuum and the sun’s constant UV onslaught. Down here on Earth, we’re protected by mile after beautiful mile of thick, abundant, not-going-anywhere-anytime-soon air.

Mercury? Basically nothing. Venus? Incredibly thick, yes, but made of poisonous carbon dioxide and sulfer. Mars? Barely even counts.

The gas giants? Yes, they have a lot of atmosphere, more atmosphere than anything else, hence the classification.

Beyond that? Nothing. Countless moons and asteroids without a speck of lighter elements to call their own. It’s just dead wastelands, good for stunning landscape photography but not much else.

Except, that is, for Titan.

Titan is the largest moon of Saturn, larger even than our own Moon. And it has an atmosphere. A thick one – almost 50% more air pressure than sea level on Earth. In other words, if you were to land on the surface, you could, without too much effort, breath it, if you wanted to.

But you don’t want to.

The outer solar system is not a friendly place in general, mostly because of the extreme distance from the sun. At Saturn’s orbit, the temperatures at Titan don’t climb higher than -290 degrees Fahrenheit. So even on the sunniest of days on Titan you would, in the span of a few minutes, freeze to death.

But if you could somehow survive the frigid temperatures, you would find an atmosphere not too dissimilar from Earth, when it comes to nitrogen at least. But whereas our own atmosphere contains a lovely amount of oxygen, the remainder of Titan’s air is mostly methane. You know, the flammable gas.

On Earth, to make a fire you need a source of fuel, which you ignite to start a chain reaction with the oxygen just hanging around in the air. On Titan, the roles are reversed. If you want to start a fire there, you need to bring an oxygen tank, ignite it, and allow it to combine with the fuel (i.e., methane) just hanging around. It’s a fun experiment to do, if you ever get a chance to try it.

How To Strengthen An Organization In Times Of Crisis

Ghostly ‘Space Clouds’ And An Eerie Light On...

‘Megaton Musashi’ Is Still Alive And Could Be...