The Greenwich, Connecticut-based firm picks stocks using a long-short strategy that focuses on bottom-up, fundamental analysis. Combining growth and value strategies, the firm, whose founder was a former “tiger cub” of Julian Robertson (Trades, Portfolio), is known to not hold positions for very long.

Having previously exited a position in PayPal in the first quarter of 2019, the firm entered a new 3.36 million-share stake, giving it 1.93% space in the equity portfolio. The stock traded for an average price of $104.36 per share during the quarter.

The San Jose, California-based company, which operates an online payments system, has a $143.42 billion market cap; its shares were trading around $123.05 on Wednesday with a price-earnings ratio of 59.26, a price-book ratio of 8.52 and a price-sales ratio of 8.2.

The Peter Lynch chart shows the stock is trading above its fair value, suggesting it is overpriced. Influenced by a share price and price-sales ratio that are near five-year highs, the GuruFocus valuation rank of 1 out of 10 also supports overvaluation. 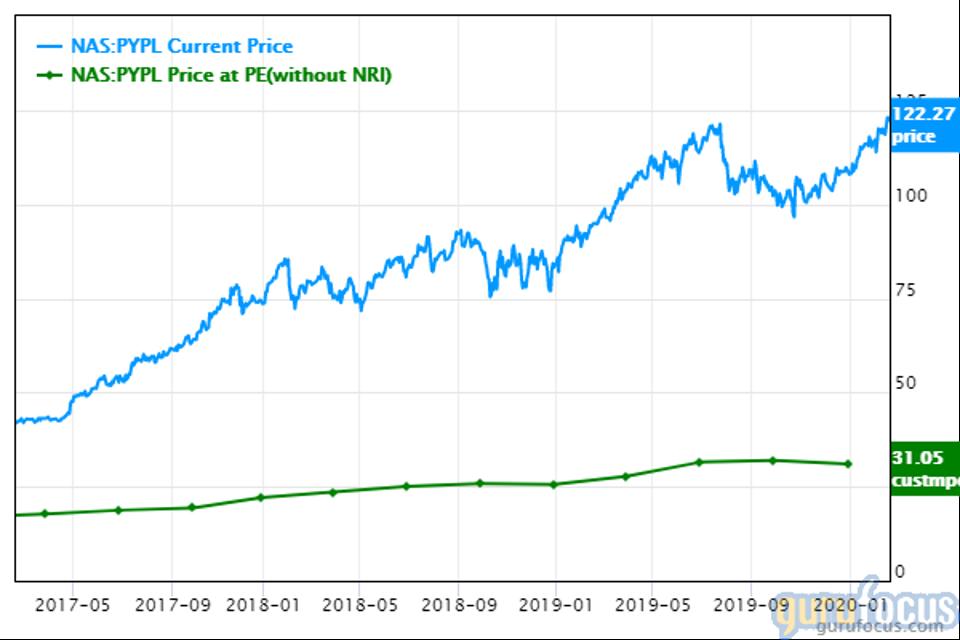 GuruFocus rated PayPal’s financial strength 6 out of 10. Although the company has issued $4.7 billion in new long-term debt over the past three years, it is at a manageable level due to adequate interest coverage. The Altman Z-Score of 3.55 indicates the company is in good financial standing.

The company’s profitability scored an 8 out of 10 rating, driven by operating margin expansion and strong returns that outperform over half of its competitors. PayPal also has a high Piotroski F-Score of 7, which implies business conditions are healthy.

Lone Pine invested in 3.04 million shares of Match, dedicating 1.32% of the equity portfolio to the position. During the quarter, the stock traded for an average price of $72.82 per share.

Headquartered in Dallas, the company, which owns and operates several online dating websites, including Match.com, Tinder, Hinge OkCupid and PlentyOfFish, has a market cap of $21.50 billion; its shares were trading around $77.16 on Wednesday with a price-earnings ratio of 42.38, a price-book ratio of 67.34 and a price-sales ratio of 10.89.

According to the Peter Lynch chart, the stock is overvalued. The GuruFocus valuation rank of 2 out of 10 also implies overvaluation. 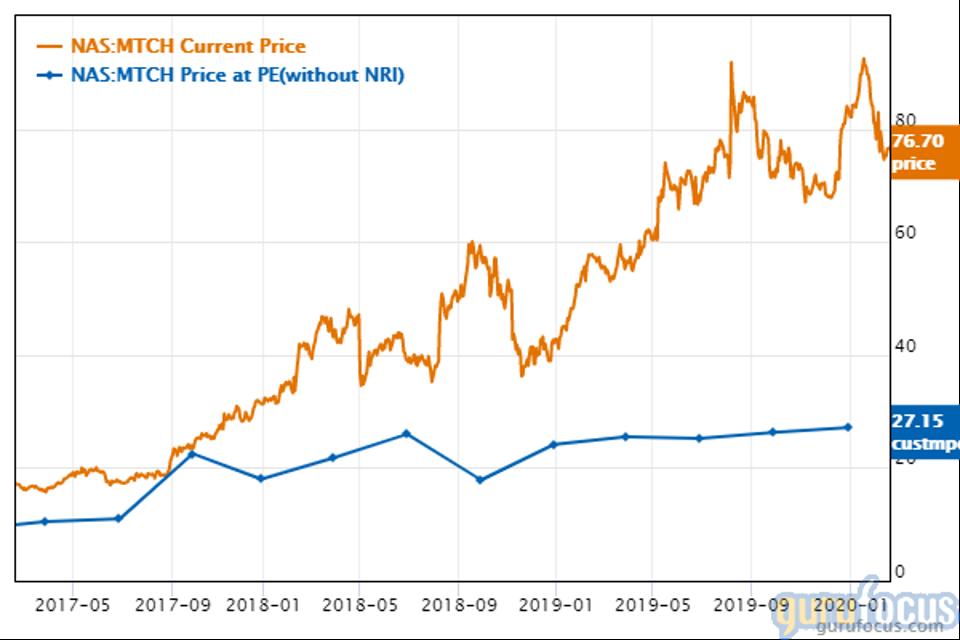 Match’s financial strength was rated 5 out of 10 by GuruFocus on the back of a low cash-debt ratio and sufficient interest coverage. The high Altman Z-Score of 8.56, however, suggests it is in good financial shape.

The company’s profitability scored an 8 out of 10 rating, driven by operating margin expansion, strong returns that outperform a majority of industry peers and a healthy Piotroski F-Score of 7.

Mandel’s firm picked up 6.06 million shares of Luckin Coffee, allocating 1.27% of the equity portfolio to the stake. Shares traded for an average price of $25.62 each during the quarter.

The price chart shows the stock has gained nearly 100% since its initial public offering last May. 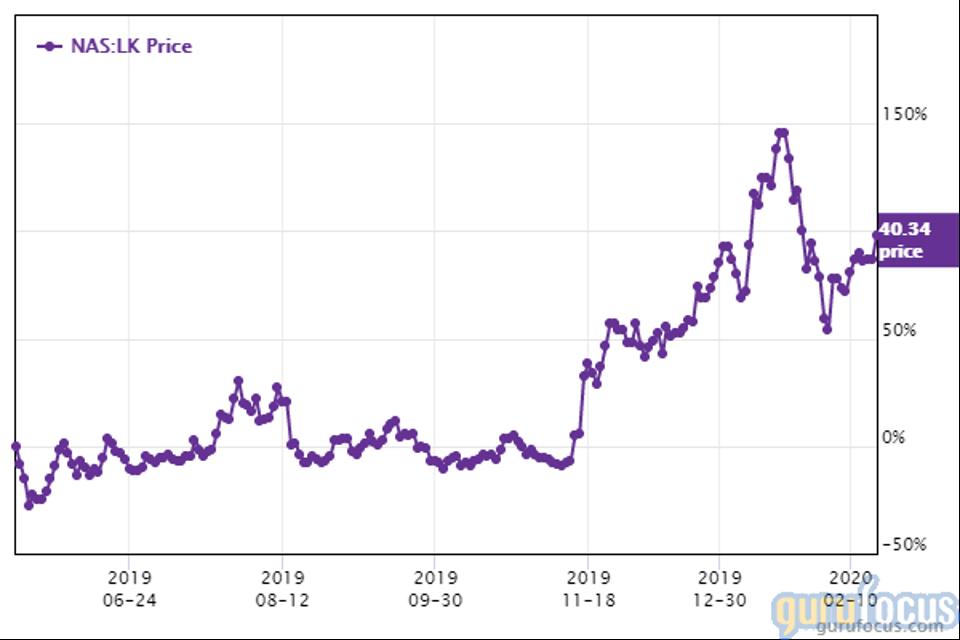 GuruFocus rated Luckin Coffee’s financial strength 8 out of 10, driven by high cash-debt and debt-equity ratios and a robust Altman Z-Score of 26.49. The Sloan ratio, however, warns that the company may have poor earnings quality.

The company’s profitability did not fare as well, scoring a 1 out of 10 rating on the back of negative margins and returns that underperform a majority of competitors.

Lone Pine established a 1.06 million-share stake in Dexcom, expanding the equity portfolio by 1.23%. The stock traded for an average per-share price of $191.34 during the quarter.

The San Diego-based company, which develops and manufactures glucose monitoring systems for people with diabetes, has a market cap of $27.11 billion; its shares were trading around $297.51 on Wednesday with a price-earnings ratio of 274.09, a price-book ratio of 31.06 and a price-sales ratio of 18.41.

Based on the Peter Lynch chart, the stock appears to be overvalued. GuruFocus also noted its share price and price ratios are near multiyear highs. 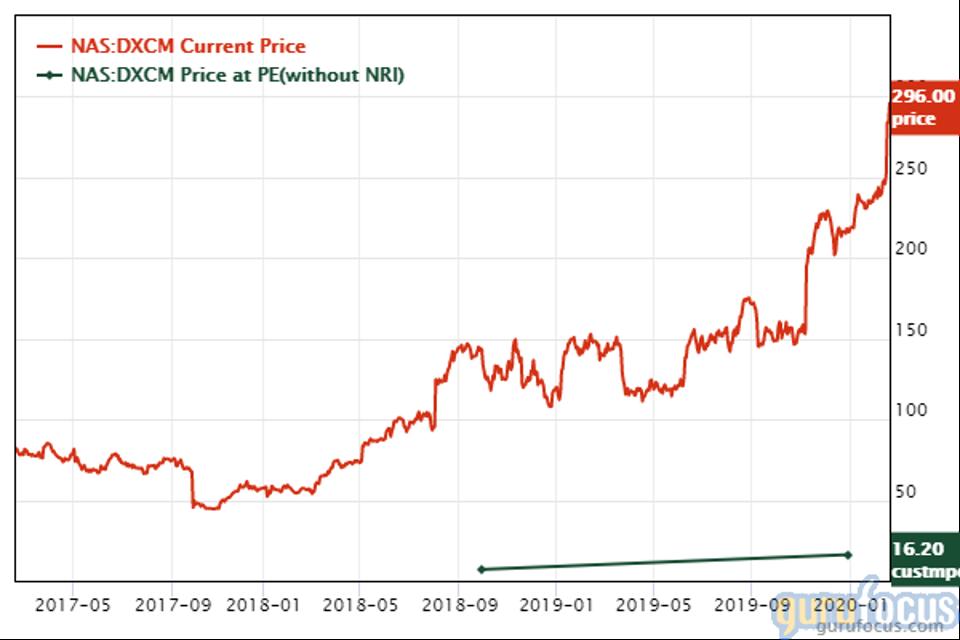 Weighed down by poor interest coverage and a Sloan ratio that hints at poor earnings quality, Dexcom’s financial strength was rated 5 out of 10 by GuruFocus. The Altman Z-Score of 12, however, suggests the company is in good financial health.

The company’s profitability scored a 4 out of 10 rating. Although the margins and returns underperform a majority of industry peers, the moderate Piotroski F-Score of 5 implies operations are stable. Dexcom also has a business predictability rank of one out of five stars. According to GuruFocus, companies with this rank typically see their stocks gain an average of 1.1% per annum over a 10-year period.

The firm bought 8.97 million shares of Under Armour. The trade had an impact of 1.03% on the equity portfolio. During the quarter, the stock traded for an average price of $19.44 per share.

The popular sports apparel and equipment manufacturer, which is headquartered in Baltimore, has a $7.1 billion market cap; its shares were trading around $16.52 on Wednesday with a price-earnings ratio of 79, a price-book ratio of 3.48 and a price-sales ratio of 1.43.

The Peter Lynch chart suggests the stock is overvalued. The GuruFocus valuation rank of 8 out of 10, though, leans toward undervaluation as the share price, price-book and price-sales ratios are near two-year lows. 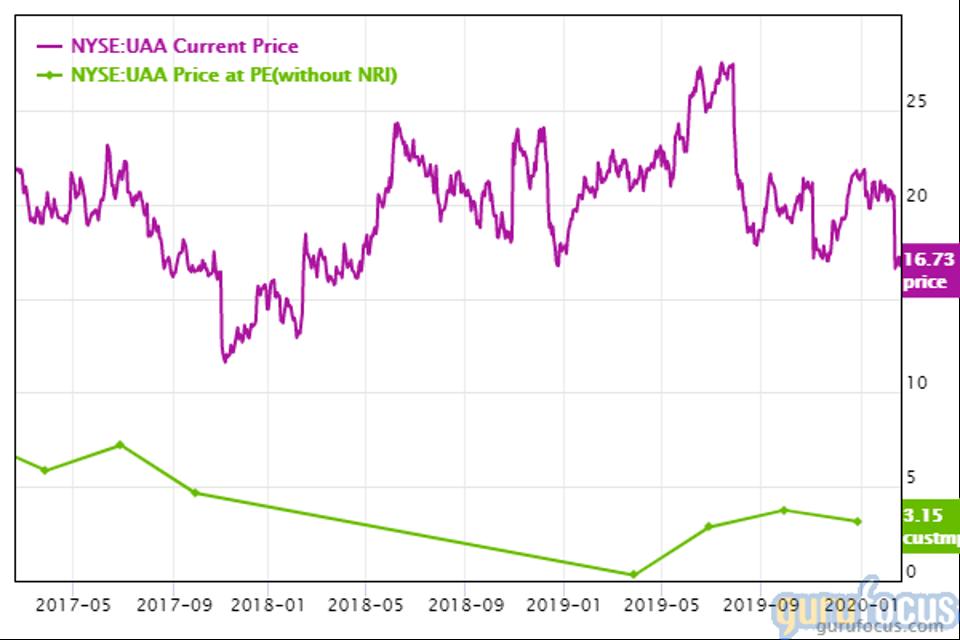 Peter Lynch chart for Under Armour.

GuruFocus rated Under Armour’s financial strength 6 out of 10. In addition to comfortable interest coverage, the company’s Altman Z-Score of 3.16 indicates it is in good shape financially.

The company’s profitability fared even better, scoring an 8 out of 10 rating even though its margins are in decline. While Under Armour is suffering from returns that underperform half of its competitors and has recorded a slowdown in revenue per share growth over the past year, it also has a moderate Piotroski F-Score of 5 and a one-star business predictability rank.

With its purchase of 1.99% of Under Armour’s outstanding shares, Mandel’s firm now has the largest stake. Ray Dalio (Trades, Portfolio), Pioneer and Jones are also shareholders.

Around half of the firm’s $18.86 billion equity portfolio, which is composed of 43 stocks, is invested in the technology and consumer cyclical sectors, followed by smaller holdings in the industrials, health care and communication services spaces. 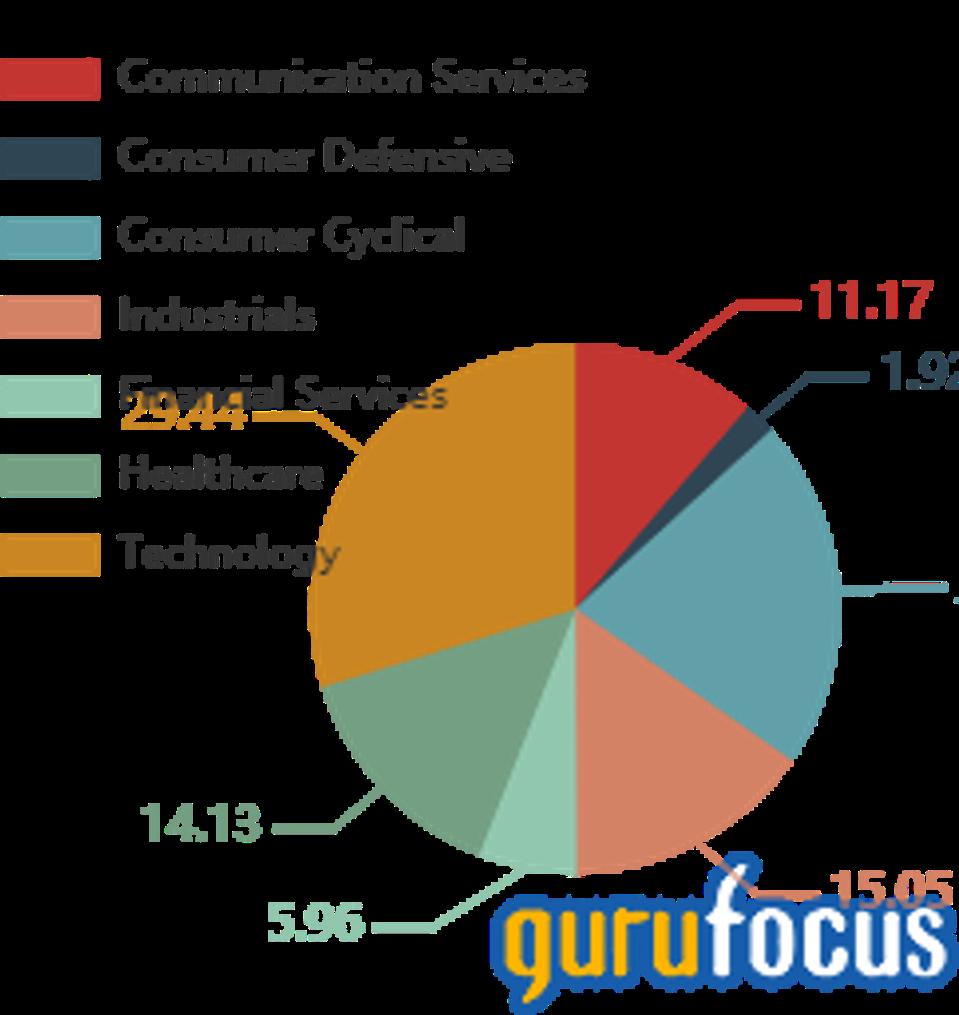 Can Jarrell Brantley Be A Rotation Player For The Utah Jazz?

Can Qualcomm See Sustainable Revenue Growth, Despite A...

Coronavirus COVID-19 Will Go Down In History As...

Treasury Reminds Taxpayers To Watch Out For Stimulus...