The Triple Threat Of Terrorism In The UK: Will Emergency Legislation Work? 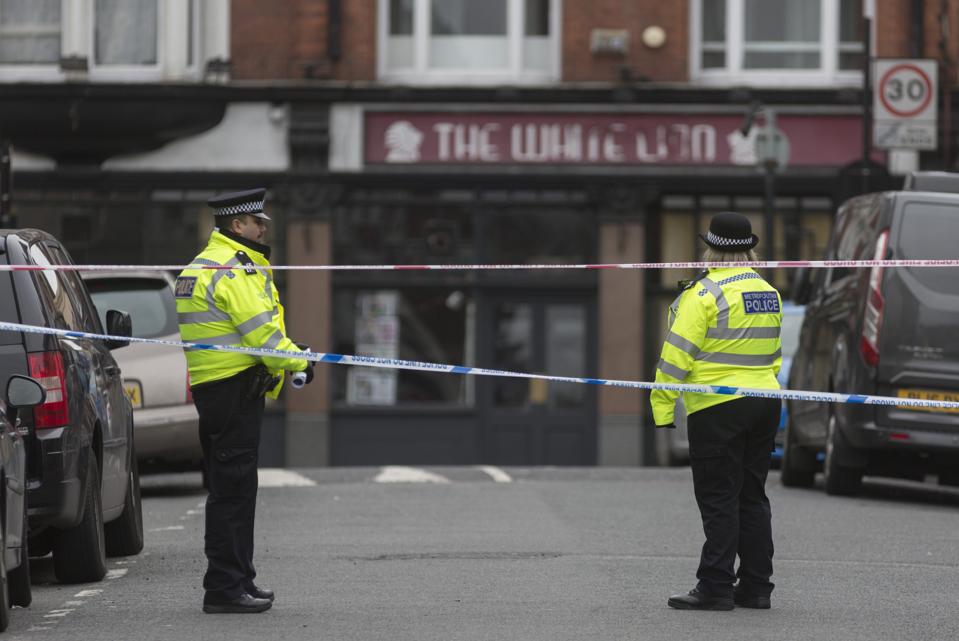 The Streatham High Road remains closed 24hrs after the terrorist attack in south London, in which … [+] Sudesh Amman, 20, was shot dead by police after stabbing people, on 3rd February 2020, in London, England. Amman had been released from prison a week ago after serving half of a sentence for terror offences, and was under police surveillance.

Sudesh Amman had been under surveillance for a little more than a week before he decided to commit an act of violence, stabbing a man and a woman in broad daylight while counter-terrorism officers watched.

Recently released from jail after serving half of his sentence, Amman was the second offender in the United Kingdom to go on to commit a terrorist attack. As a response to this, new emergency legislation ending the release of people convicted of terrorism offences halfway through their sentence has been presented to British Parliament. The move to push through the legislation, and even apply it to serving prisoners, is one of the first clear steps of Britain separating itself from the European convention on human rights (ECHR), following its action to leave the European Union earlier this year. The ECHR prevents participating nations from imposing longer sentences than those applied when a criminal offence was committed.

Emergency legislation is indicative of a crisis in the United Kingdom. The country continued to face a triple threat of terrorism. The first risk comes from its 3,000 ‘homegrown’ extremists monitored by The Security Service, MI5, as well over 20,000 former ‘subjects of interest’. The second threat stems from its prison population, where calls have been made to separate Islamist extremists from other inmates, due to concerns that they will radicalize the general prison population. The third risk comes from its British citizens abroad, who security services could not prevent from joining terrorist organisations such as Islamic State, and now live in refugee camps where they publicly state that they want to come home. This latter population tends to consist predominantly of women and children.

The monitoring of ‘homegrown’ extremists – particularly those on the Islamist side of the spectrum – has come with its own problems. Critics of the country’s counter-terrorism program, Prevent, have claimed that it infringes on the human rights of certain communities, particularly the Muslim population, by encouraging ordinary people to spy on their neighbors. However, it is clear that policing alone is insufficient to deal with the threat of terrorist violence, and community policing and early intervention is necessary to prevent it. Court transcripts of those prevented from travelling abroad to join a terrorist organisation, for example, have revealed the extent to which family members are critical in deescalating violence and noticing red flags.

It is also important to consider sentencing. In 2013, pre-Islamic State, the majority of Islamist-related terrorist offenders in the United Kingdom served a sentence of 2-5 years. The lowest level terror offence carries a sentencing range of between 21 months and five years, which some argue is insufficient to cover new types of “low-tech” attacks, such as those witnessed in Streatham and London Bridge. With the change in Britain’s relations with the EU, it may be possible that the government considers sentences modeled more closely with the United States, where even those charged with non-violent offences serve 13 years on average. It would therefore be necessary for any wider remit on tougher sentencing measures in the United Kingdom to apply to not only violent offenders, as individuals are increasingly convicted for possession of terrorist materials or bomb-making manuals.

The second issue comes from the prisons, where those deemed to be terrorist offenders are housed. Following Amman’s attack, questions have been raised as to whether ‘deradicalization’ in prison is effective. Amman, for example, refused to engage with programmes to manage his risk. Other providers who manage risk in prisons have reported that those who do opt to engage with programmes often refuse to speak during sessions. Recent announcements by the Government have focused on increasing resources to those who can counter the Islamist ideology, something which requires a profound understanding of the Quran, by increasing numbers of imams in prison, as well as specialist psychologists. Other risks include terrorist offenders forming networks in jails, where they can share ideas and bolster recruitment. Releasing prisoners who still present a risk to society comes at a huge cost with regards to surveillance, and can, in the worst case scenario, lead to an attack.

One way that the United Kingdom may deal with this issue is to tighten its legislation on monitoring prior to prison time, by widening the the material support provisions under current terrorism laws. Prior to being caught for possession of a bomb-making manual, Amman was sending thousands of encrypted messages to family members about Islamic State, and attempted to convince his girlfriend to behead her parents for being kuffar (disbelievers). He was clearly indoctrinated by a violent extremist ideology, yet no offence exists to ensure that the government can monitor or charge violent extremists, even when no one was harmed. In the United States, for example, a conviction for providing material support or resources to a terrorist organisation can result in imprisonment for 20 years. If anyone was killed as a result, then the sentence can be life in prison.

The final risk, and that which the United Kingdom is least prepared for, is that of those British fighters who went to join groups such as Islamic State abroad and now want to come back home. There are over 60,000 women and children with links to Islamic State in camps in such as Al Hawl in Syria, and the United Kingdom has been held to account by many international actors – including the United States – for dragging its feet in repatriating the British ones among them. However, there is hope that recent legislation tightening sentencing, allowing for better monitoring, and adding resources to deradicalization and rehabilitation efforts will pave the way to try those currently abroad, on British soil.

We’re Getting An ‘Animal Crossing: New Horizons’ Nintendo Direct, Here’s When To Watch