Breaking
Why You Should Stop Using Your Facebook Messenger...
IRS Collections Appears To Be Broken
Google Search Rival DuckDuckGo Exceeds 100 Million Daily...
Intel: Poised For A Comeback?
Ignore These 4 Funds And You’ll Miss An...
5 Reasons Customer Service Employees Become Negative And...
Call Of Duty’s Dominance In The Gaming Industry...
How This Teen Yoga Instructor Became An Entrepreneur,...
7 Ways Pain-Free Ways Save $360 Per Month
Jeff Bezos Once Again The World’s Richest Person...
As The Bitcoin Price Whipsaws, These Radical New...
HHS Secretary Alex Azar Submits ‘Resignation Letter,’ Effective...
Tapping Into Health To Excel In Business
Weekend Favs January 16
Over 11,000 Ice Cream Cartons Recalled Due To...
My Top Ten Concerns About The 2021 Tax...
Home Business The Trump Tax Cut Is Two Years Old, Where Are The Jobs Being Created?
Business

The Trump Tax Cut Is Two Years Old, Where Are The Jobs Being Created? 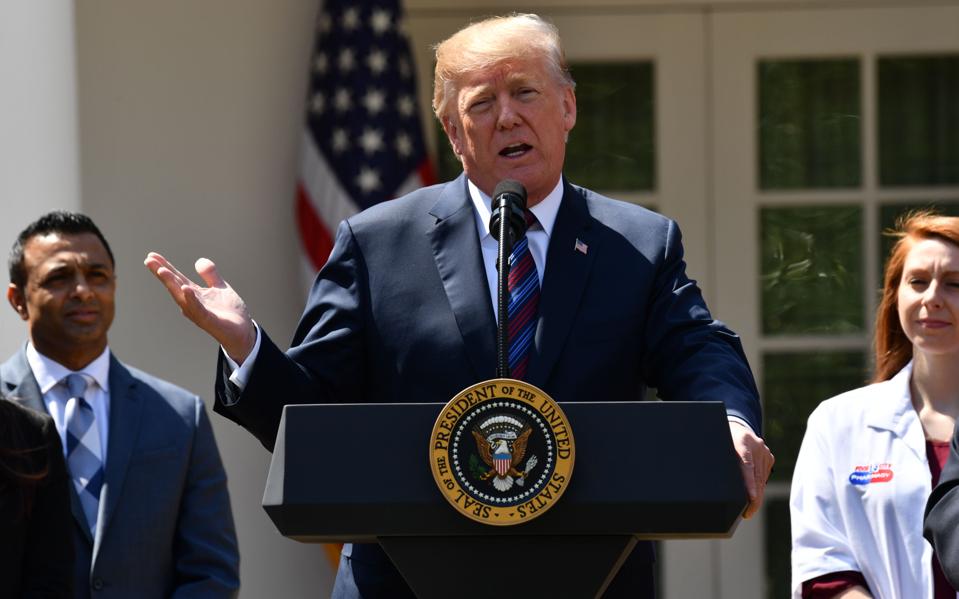 US President Donald Trump speaks about tax cuts for Americans from the Rose Garden at the White … [+] House on April 12, 2018 in Washington,DC. / AFP PHOTO / Nicholas Kamm (Photo credit should read NICHOLAS KAMM/AFP via Getty Images)

President Trump signed the Tax Cut and Jobs Act into law in December 2017. It cut taxes for most Americans, especially those living in low-tax states.

But higher wage earners living in high-tax states such as California and New York weren’t able to deduct more than $10,000 of state and local taxes (SALT) off of their federal tax returns, reducing the value of their tax cut, and, in some cases, increasing their overall tax burden.

Because of the $10,000 SALT deduction cap, the new federal tax law changed the effective tax rates in all 50 states at once, as if 50 separate state legislatures passed a new tax code into existence at the same time. This makes for an interesting economic test, measuring how lower tax states might attract more job-creating capital than their higher tax states counterparts.

In the last year of the Obama Administration and Trump’s first year in office through the tax cut in December 2017, the 23 states with higher taxes—defined as the average 2016 SALT deduction being $10,000 or more—saw private sector job growth of 2.7%. In the same period, private sector payrolls grew by 3.6% in the 27 low-tax states, a modest 33.6% advantage.

In the two years after the tax cut, however, low-tax states have widened their economic advantage over high-tax states, with private sector job growth accelerating to 4.5% vs. 2.3% in the high-tax states, a significant 99.2% advantage.

Here it’s important to note that the average size of a manufacturing establishment was 35 workers in 2012 with a large share of them organized as sole proprietorships, meaning that the owners paid individual income taxes on any profit they took home as pay—meaning that the Trump tax cut and SALT deduction limit had direct bearing on their decision to expand or move to a lower cost state.

The table below shows the top 10 states for manufacturing job growth from December 2017 to December 2019, with Nevada leading the way in percentage terms, 20.2% and Texas leading in the number of employees added, 53,500, more than double the total added in California, 25,300. Listed as well are the top 10 states for private sector job growth, with Utah leading the pack in terms of percentage growth, at 7.1% while Texas created the largest number of private sector jobs in the period, 602,200, more than number two, California, at 529,700 jobs. California’s population is 36% greater than Texas’, rendering Texas’ greater total employment growth all the more remarkable. 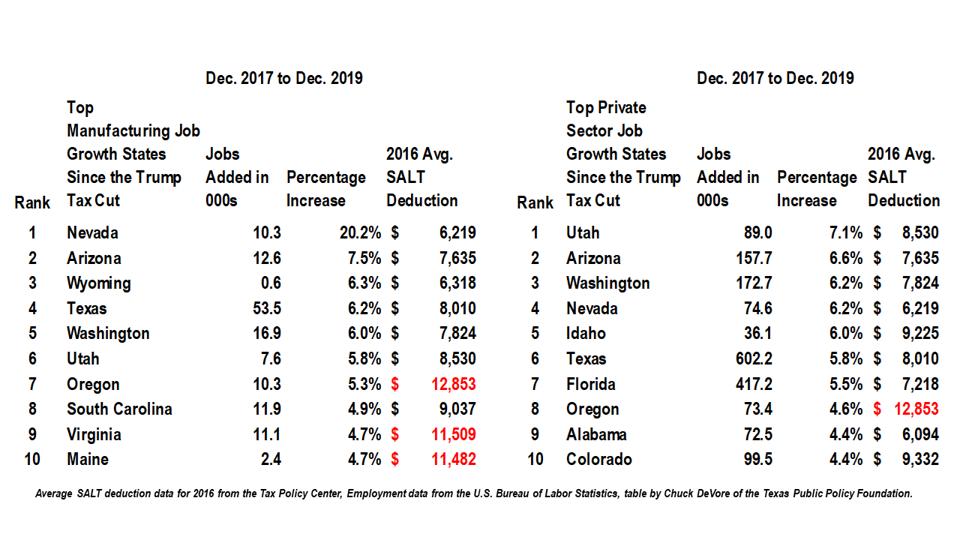 Low-tax states have dominated for private sector and manufacturing job creation since the Trump tax … [+] cut in 2017.

Of further note in the top ten listings for manufacturing and for private sector job growth is that only three high-tax states appear in the former listing (Oregon, Virginia, and Maine), and only one appears in the latter (Oregon). All three of these high-tax states have a state and local tax burden in the low-end of the high-tax state listing with SALT deductions averaging $12,985 among the 23 high-tax states, ranging from Missouri’s $10,083 to New York’s $21,779.

Further, Oregon is in a unique position in that it neighbors California to the south, burdened by the nation’s third-highest state and local tax bill with average SALT deductions of $18,770. Thus, Oregon, a state with no state sales tax, looks like a bargain compared to California. If California had Texas’ tax structure and regulatory climate, it’s likely that Oregon’s growth numbers wouldn’t look nearly as strong.

The accelerating jobs climate in the 27 low-tax states compared to the high-tax states is one big reason why New York Democratic Governor Andrew Cuomo is appealing his loss before the federal courts in a legal challenge to the SALT deduction cap. Along with Connecticut, Maryland and New Jersey, states with high taxes and tepid job growth, New York is seeking to overturn federal tax law. They won’t succeed, as courts at federal and state level have soundly rejected the theory of nullification whereby states can overturn federal laws they don’t like. Still, Governor Cuomo claims, “The Trump administration’s SALT policy is retribution politics – plain and simple.”

Of course, if Governor Cuomo wanted to get serious about job growth, he could always pick up the phone and call some fellow governors in states where jobs are booming—though, in fairness, they’d likely advise him to hike taxes even higher, after all, they’d be happy for New York to ship more jobs out of state.

The Economics Of Panic Buying