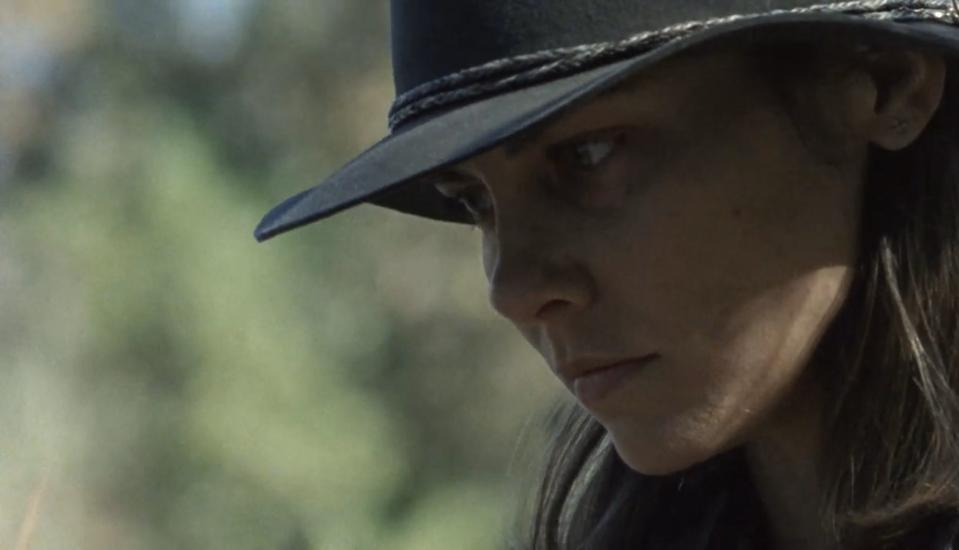 Last night was the awkward conclusion of The Walking Dead’s tenth season, for now. The show got itself in the uncomfortable position of being able to air every episode of the season except the finale, because due to the coronavirus lockdowns, they could not finish post-production work on the last ep.

What we got instead was certainly not anything that felt like a finale, but it was rather good episode all the same. The Negan and Lydia moment was great. I actually really like Princess, when I very much disliked her in the comics. And Beta straight up talking to a real walker was probably my favorite bit of the episode.

But The Walking Dead knows what everyone wants to see, and they showed it off in the preview for the finale. That would be the return of Maggie Rhee, a door reopening after one has just closed (Michonne leaving).

The scene shows Maggie getting a letter in a dead drop that I believe was written by Carol, which we learned last week. You can pause and read part of it, and it opens with the news that pretty much all Maggie’s old Hilltop friends are dead with Jesus, Tara and Enid listed. She then goes on to describe who the Whisperers are and what they’re doing with their skin masks and their horde.

Maggie is wearing some sort of hat and bandana, which may not seem like a huge clue, it could just be fashion choice, however we do have two different groups this could connect her to. Namely, the “old west wagon train” we saw Michonne come upon in her final moments of her departure. Or the Fear the Walking Dead group that also wore western-type hats that may have evolved over the years into something bigger. We never did figure out where Georgie was connected to or where Maggie might have gone. Another option is the Commonwealth, the group that Eugene and company are about to come into contact with once they meet up with Stephanie from the radio.

Regardless, it seems like Maggie will be back to help save the day to some degree when she returns in the finale. We don’t know if it will be just her or if she’ll have some sort of army at her back. But given that she’s been gone for literally years at this point, presumably she’s made some friends.

With major characters like Michonne, Rick and Carl all gone, it does seem like it could be time for Maggie to have a larger role than when she left. Yes, she was a season 2 original, and there are not many of those left (she’ll be the longest running veteran outside of Carol and Daryl when she returns), however the show has done great work since she departed with previously underused characters (Daryl, Aaron) and has introduced some very solid new ones as well (Connie, Yumiko, Lydia), so hopefully Maggie can stand out more than she used to. I am also curious to see little Herschel, as he’d be what, about six now? I am losing track of the timelines, to be honest.

AMC promises to get the season finale out as soon as they can, as they just need to finish it up and they obviously don’t want to wait any longer than they have to. But Walking Dead: World Beyond and the next seasons of Fear and TWD will probably end up facing longer delays because of all this. Stay tuned.

Is NetApp Stock Oversold At $40?

Stop Managersplaining On Video Calls And Give People A Voice

5 Ways to Create a Culture of Care...

What To Consider Before Expanding Into International Markets