‘The Walking Dead’ offers up one of its more frightening, intense episodes in a while.

Sunday night’s episode of The Walking Dead was intense and frightening and honestly one of the better one’s this season—and it didn’t hurt that Carol wasn’t in it this time after her ridiculous behavior last week.

The choices Carol made in the cave continue to impact her loved ones in this Episode, and none more so than Daryl who rushes off to find another way into the cave to save Connie and Magna. He goes alone while the others head back to Alexandria for help.

Meanwhile, in Alexandria Gamma is taken prisoner and questioned in order to determine whether or not she can be trusted. She tells Gabriel, Rosita and the others that she’s come to see her sister’s baby, but it isn’t until later that she admits she killed her own sister.

Even then, Rosita doesn’t trust her and won’t until events take a much darker and more violent turn.

Gabriel is the real wild card, however. He’s changed so much this season it’s kind of astonishing. He had already moved into a leadership role in Season 9 after the time jump. But now there’s a darkness fallen over him and a brittle rage. It was the murder of Siddiq that sparked the change. Gabriel’s wrath bubbled over and he took vengeance on Dante. 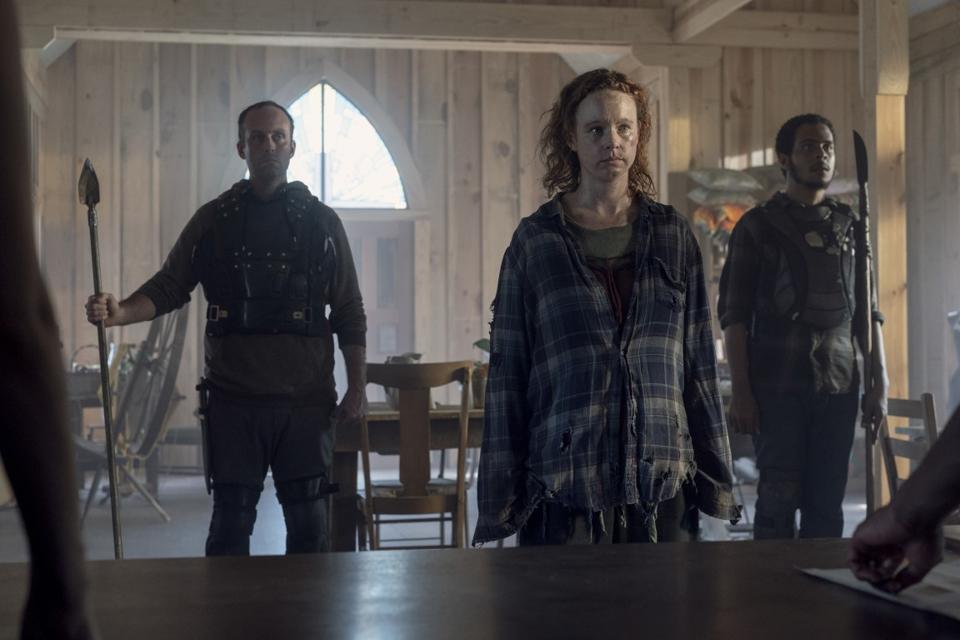 Gamma is brought before the Council.

You can’t blame him for it, but there’s little doubt now that the act changed him. When they’re all standing around discussing Gamma, he tells the rest of them that they’re hesitating because they’re afraid, but they shouldn’t be. The Whisperers are cowards, and Gamme is proof.

“We broke her…completely,” he says. “And if we can break her we can break others. If you come across one of them, keep them alive. Start pulling teeth and taking fingers. Get information, because we now know the more pain and fear you pour over them, the sooner they drop the act, which is what it is!”

Damn, Father Gabriel. Pulling teeth and taking fingers? I have to say, I prefer this more ferocious priest to the cowardly one. But that’s still a little . . . extreme. Rosita questions him later but he’s clearly turned a corner. We’ll see if he follows the tough talk up with action, but for now he’s a changed man, more firm in his convictions—however dubious—than we’ve ever seen him.

The best parts of the episode were Daryl’s confrontation with Alpha and Beta’s nightmare invasion of Alexandria. 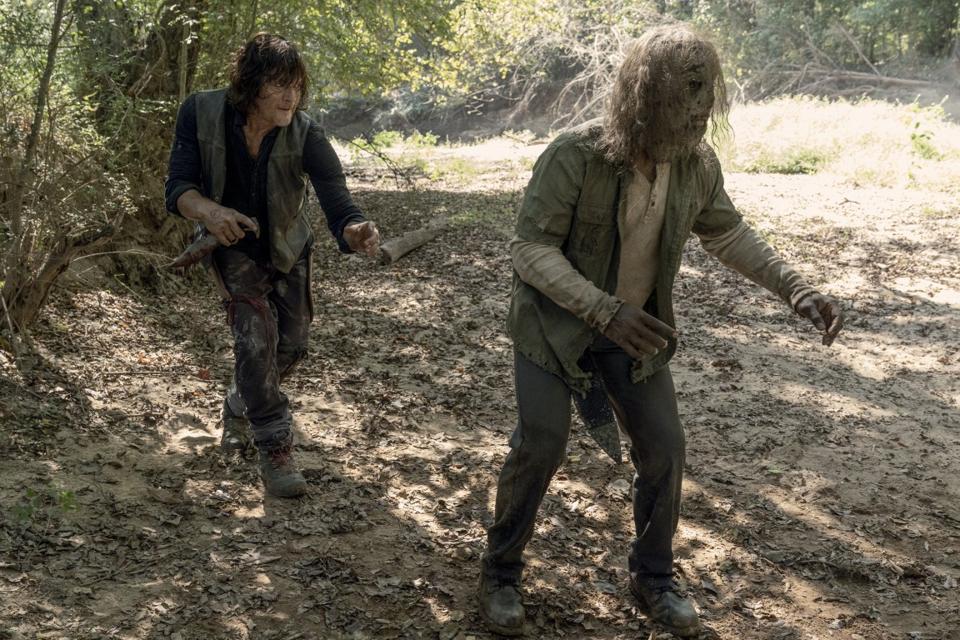 Daryl goes all Rambo on the Whisperers.

After Daryl runs off he comes across the Whisperers led by Alpha, leading a group of walkers. He follows them and ends up getting into a big fight where he’s wounded quite badly. All the whisperers except Alpha are killed, but she’s wounded almost as badly as Daryl.

Daryl, however, has a rather large knife stuck in his thigh and is losing a lot of blood. He stumbles away, trying to put some distance between him and Alpha and her pet walkers. She’s not in much better shape, and while she’s able to track him to where his hiding spot in a large open-air warehouse/garage by following his trail of blood, she doesn’t risk a fight. Instead she bangs on the wall, getting the attention of nearby walkers and hoping they’ll finish the job for her.

They very nearly do. Daryl is forced to yank the dagger from his leg to kill one of them and we see blood spurting out everywhere as he gasps and clutches at the wound. It’s very touch and go, and one of the most intense Daryl scenes ever in this show. If I wasn’t so certain that AMC won’t dare to kill him off, I might even be worried.

After that the two have a pretty entertaining conversation and Alpha makes one last attempt to come finish the job before collapsing to the ground. That’s when Lydia shows up, almost like a vision. She speaks briefly with her mother, who tells her she needs to come back and lead the Whisperers. 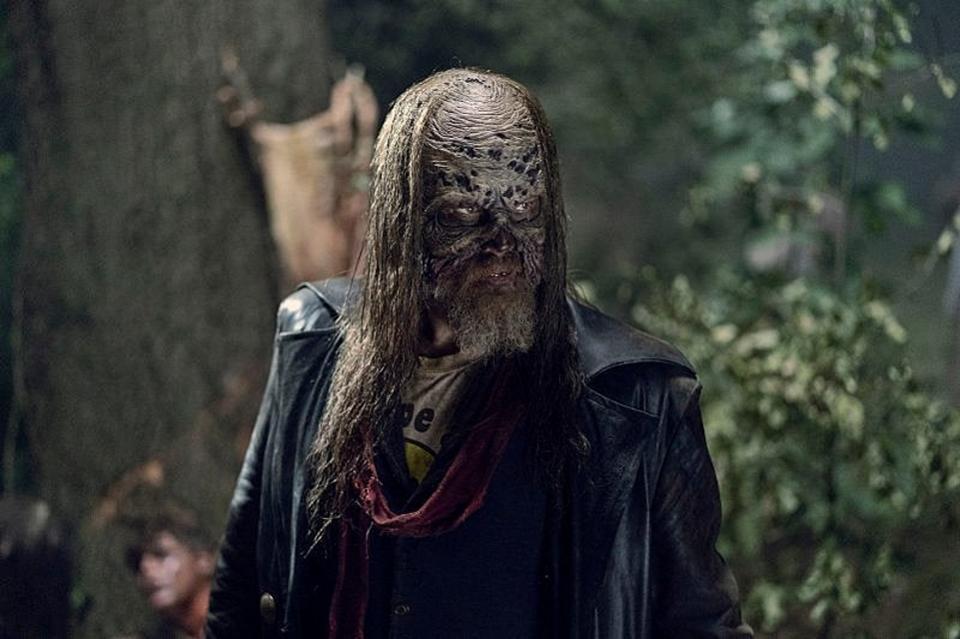 The rest of the episode plays out like classic horror/slasher movie, with Beta as the villain. When Alpha learns of Gamma’s deceit, she send Beta to bring her back. Apparently the Whisperers’ used Dante to help dig an entrance to their tunnels into Alexandria, and Beta emerges there in the dead of night.

He kills some of the residents and lets them turn, spreading chaos and panic throughout the town. Then he heads to the jail cell to take Gamma. He’s interrupted in his attempt by Laura, who bravely throws herself on the gargantuan Whisperer. Gamma is able to run away, but Beta throws Laura hard enough into the cell bars that we hear crunching sounds and see blood all over the floor. I’m skeptical that she’s dead but it’s possible. It’s bad, one way or another.

Judith waves Gamma into her house and they hide upstairs. Beta goes in after them moments later, creeping through the dark to the upstairs bedroom door. We hear a gunshot and Beta hits the ground, shot in the chest.

Obligatory “Shoot him in the face and finish the job!” moment follows, but of course they don’t. They run and Beta follows, but Rosita intervenes. Once again, she’s massively outmatched by the hulking monster, though she gives it her best shot. He’s about to land the killing blow when Gamma appears. She threatens to kill herself if he doesn’t let Rosita go, knowing that Alpha will want her alive and Beta won’t dare risk going against his master’s wishes.

It works, and he takes her, sparing Rosita. They head back on the road instead of the tunnels which is probably a big mistake. Gabriel and the others catch up with them and Beta makes his escape. Gamma has to convince the others that she wasn’t in league with him, but they eventually relent and head back to Alexandria. 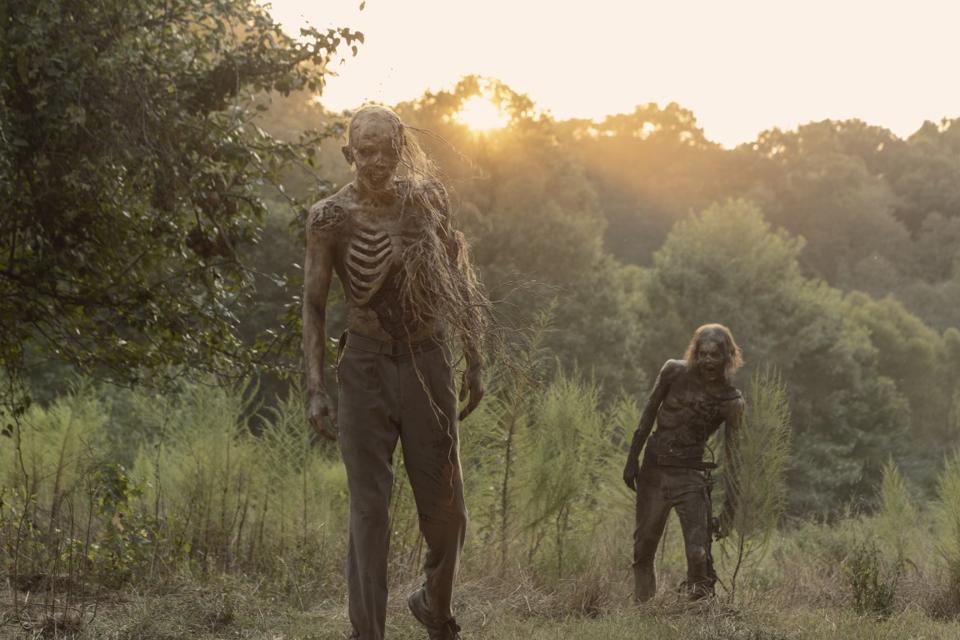 This was a much better episode than last week. It was scarier, less aggravating (no Carol nonsense) and had more going on without getting bogged down in any one story.

On the other hand, while Beta is a great monster I just get tired of all of Alpha’s mumbo jumbo. It was funny when Daryl tells her that she drove Lydia away “because you didn’t love her” and she replies “What did you say? What did you say boy? I can’t hear you,” and then proceeds to try to walk over to kill him and collapses half way there.

But honestly, she’s just tiresome at this point and the Whisperers are, well, “just an act” like Gabriel says. The entire cult relies on a gimmick and, as I’ve noted plenty of times before, this is all just dragging out far too long. It’s leaps and bounds better than the Savior war, but we’ve just replaced one endlessly talkative villain in Negan with a melodramatic villain who says stuff like “I am you and you are me” or “we are the end of the world” and I’m just not invested anymore.

That’s partly also not caring as much about any of the characters as much these days other than just a few—Daryl, Dog, Jerry, some of Magna’s crew, Aaron when he’s not being four different characters with different motivations, and Rosita. Others to a lesser degree, but everyone is just endlessly bogged down in these huge conflicts and I think this show needs something else. Like a clear path toward a conclusion and series finale. Even these very good episodes in Angela Kang’s much-revived version of The Walking Dead feel like they’re coming long after its heyday.

Forget Bitcoin As A Safe Haven; Steven Seagal Under Siege From The SEC

Supermoon: Exactly When You Should Look At This...