Home Finance The Week Ahead: A Warning From Small-Cap Stocks?
Finance

The Week Ahead: A Warning From Small-Cap Stocks? 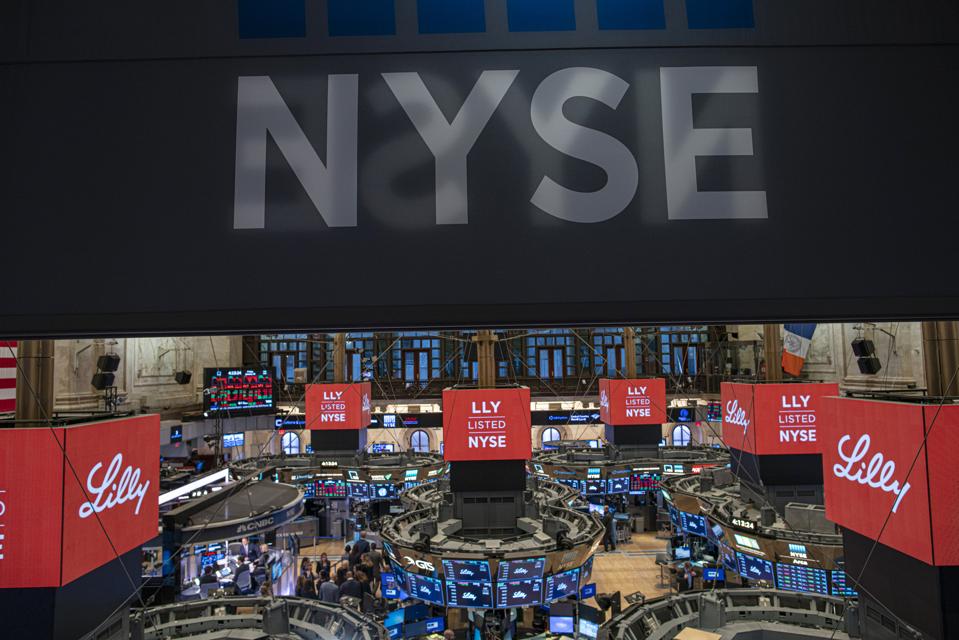 Assassination, missile attack, impeachment, and lower-than-expected job numbers? Nothing seems to bother the stock market in early 2020. The Dow Jones Industrial Average was even able to edge briefly above the 29,000 level. Although the major averages were mostly lower on Friday, a majority did close the week higher.

For the third week in a row, $NDX reached or exceeded its weekly starc+ band. The starc bands were developed in the mid-1980s by the late Manning Stoller who estimated that 90% of the price activity should stay within these bands. This makes the current activity an anomaly, and as such, something to watch.

Each week’s price range is used to calculate the next week’s starc+ band. So for this coming week, the starc+ band is at 9074. 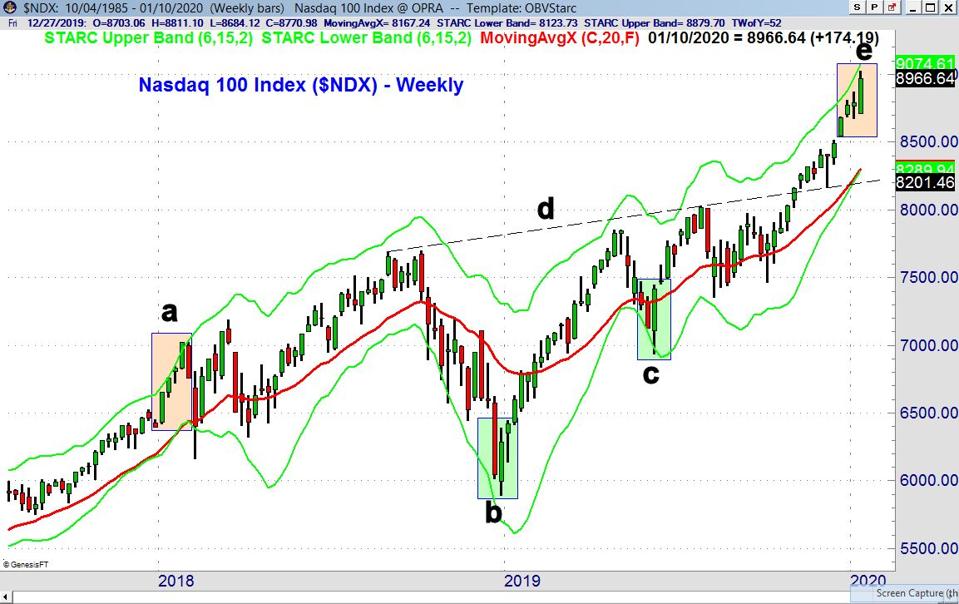 This chart of the Nasdaq 100 goes back to August 2017, and shows the move through the resistance (line d) at the start of November 2019. That resistance line is now crucial support, currently at 8202. The chart also reveals that price action outside of the starc bands does not occur very often within NDX, and when it does, it has recently coincided with turning points in the intermediate trend.

In early 2018 (box a), NDX exceeded the weekly starc+ band for five weeks in a row before it dropped sharply. In just two weeks it had dropped below the weekly starc- band. At the end of December 2018 (box b), NDX dropped below its starc- band for two weeks before it staged an impressive rally. The starc- bands were also violated in late May and early June 2019 (box c). Given this historical action, the recent activity (box e) may be a warning for the weeks ahead. 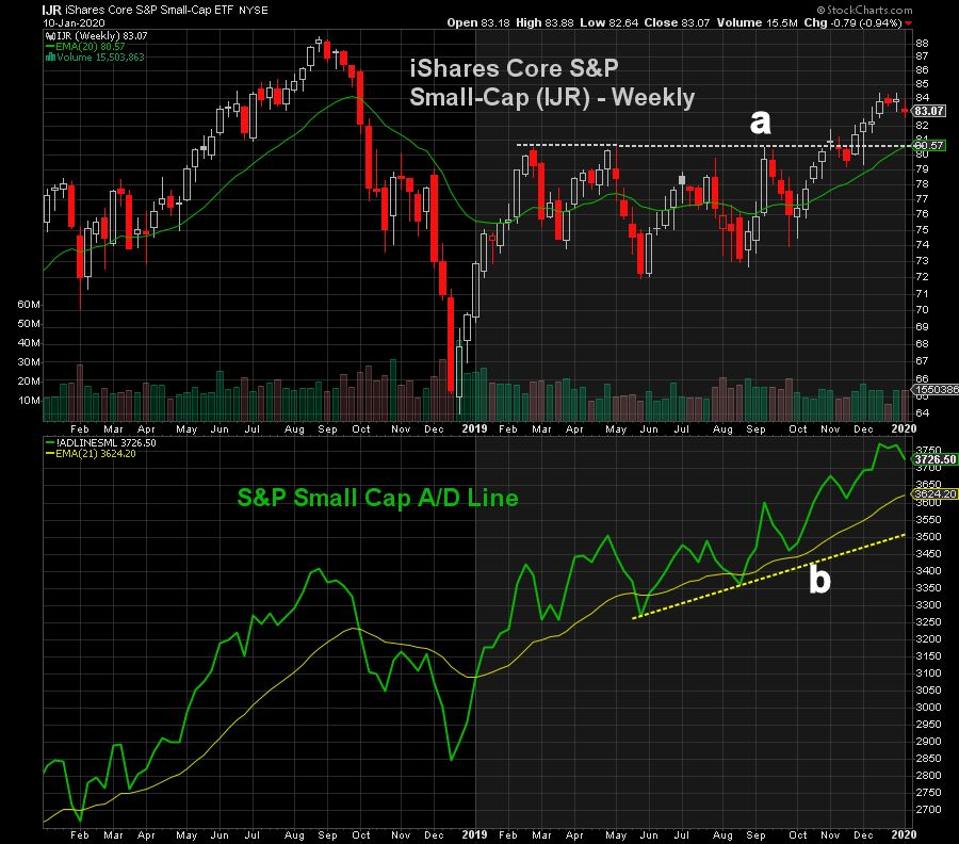 Looking to the other indexes, I think it is noteworthy that the iShares Core S&P Small-Cap (IJR) closed down 0.94% last week. IJR matched the December 20 high of $84.39 on January 2, before it turned lower. There is major support (line a) now at $80.57 alongside the 20-week Exponential Moving Average (EMA). The weekly S&P Small Cap Advance/Decline line peaked the week of December 16 and has since turned lower. However, this A/D line shows no real signs of an intermediate-term top, and has support at its rising EMA. 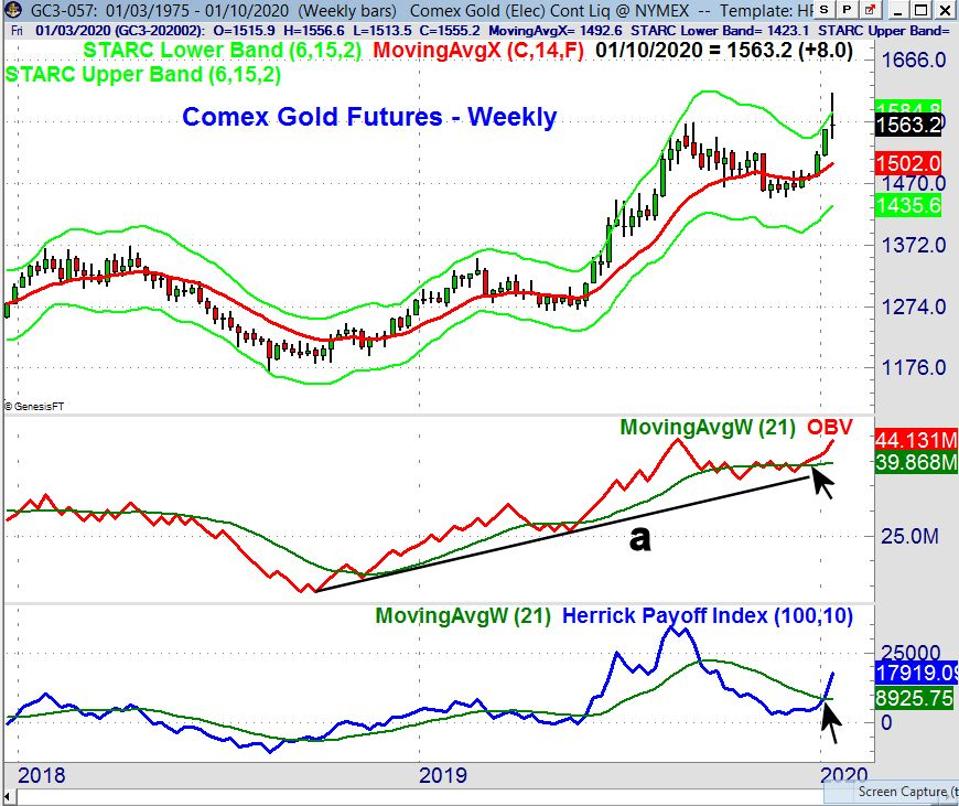 Gold prices also had a wild week, with the Comex gold futures hitting a high of $1613 early Wednesday. This occurred as the stock index futures were dropping, in reaction to the Iranian missile attack. By the end of Wednesday’s regular New York session, Comex gold futures had closed at $1557.

The weekly chart shows that the weekly starc+ band for gold was exceeded last week, and formed a doji, so these two signals could point towards some sort of intermediate-term top. However, the correction in gold from the September high lasted sixteen weeks, so in my view the recent strength is likely the start of a new rally phase.

This is consistent with the weekly technical studies. The On Balance Volume (OBV) held above the weekly support (line a) and has just moved above its Weighted Moving Average (WMA). The Herrick Payoff Index (HPI), which calculates money flow using volume, open interest, and price, stayed positive throughout the correction. The HPI moved above its WMA a week ago, which was a positive sign. 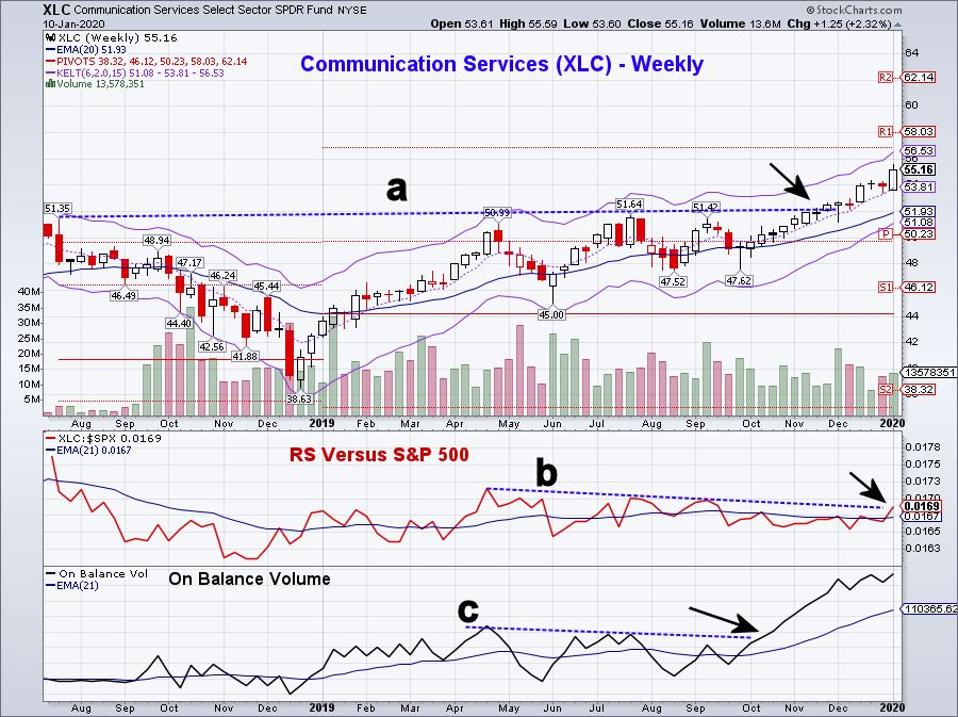 The top-performing sector last week was the Communication Services Sector Fund (XLC), which was up 2.32%, followed by the Technology Sector (XLK), up 2.18%. The week before Thanksgiving, XLC broke through weekly resistance (line a), which completed a major trading range by breaking through resistance (line a) at $52.04.

XLC closed last week at $55.16. The yearly pivot R1 resistance at $58.03 is the next major upside target, with support at the previous resistance level of $52.04. XLC’s weekly relative performance moved above resistance (line b) last week, confirming that XLC is now a market leader. XLC’s weekly on balance volume has been leading XLC higher since October, when its OBV moved through the resistance (line c).

The earnings season gets underway next week, with the big banks leading the way on Tuesday. These banks, as well as the financial ETFs, have pulled back to support, so better-than-expected earnings could end their corrections. Of course, an earnings disappointment could also drop the banks below support.

In addition, there are a number of economic reports coming out next week: the CPI and PPI reports, the Philly Fed, and Consumer Sentiment all release next week.

Last week, I reviewed the five most oversold stocks from the Dow Jones Industrial Average. A number of stocks are still bottoming and have not moved higher with the market. A number are now just giving positive technical signals. For example, CrowdStrike Holdings (CRWD) showed up on my January 3 weekend scan, was up 12.7% last week.