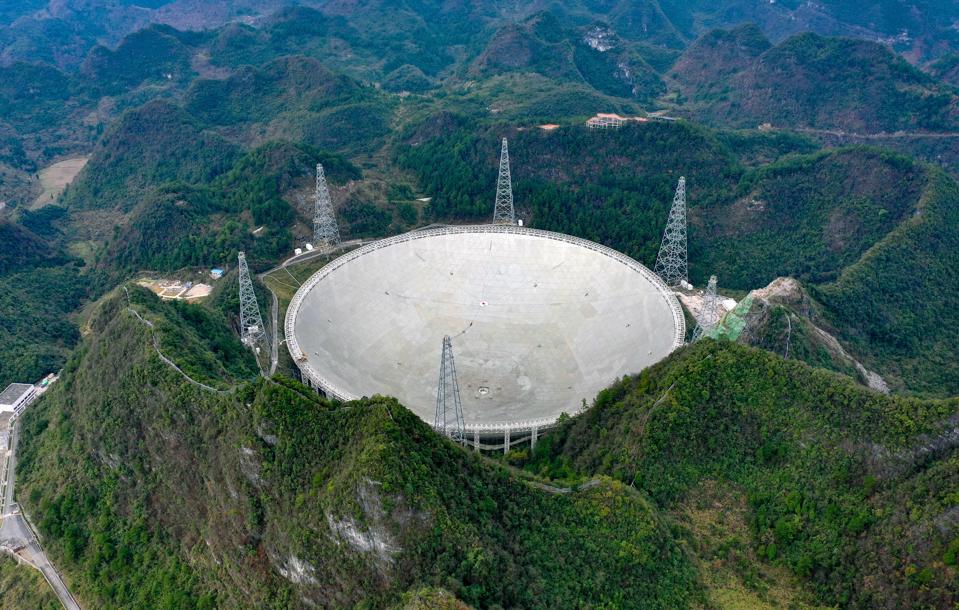 PINGTANG, Jan. 11, 2020 — Panoramic photo taken on Jan. 11, 2020 shows China’s Five-hundred-meter … [+] Aperture Spherical radio Telescope, FAST, under maintenance in southwest China’s Guizhou Province. China completed commissioning of the world’s largest and most sensitive radio telescope on Saturday, putting it into formal operation after a productive three-year trial. The telescope will gradually open to astronomers around the globe, providing them with a powerful tool to uncover the mysteries surrounding the genesis and evolutions of the universe. (Photo by Liu Xu/Xinhua via Getty) (Xinhua/Liu Xu via Getty Images)

If aliens are out there, listening for them with radio telescopes could be a good way to find them. This has been the mission for projects like SETI and the Breakthrough Listen initiative. Radio is likely the easiest way for two civilizations to communicate across interstellar space, but it isn’t without its challenges.

Although many objects in the universe create radio light, they are relatively faint compared to the radio signals that surround us every day. If you placed a cell phone on the surface of Mars, it would be the brightest radio signal in the night sky. But the reason natural radio sources are so faint is because they are so far away. Most radio sources aren’t very focused, so as their signal expands it weakens with the square of its distance. Most astronomical radio sources we have detected are powerful but distant.

Our own radio signals are weak in comparison. It is likely that our everyday radio and television signals are largely undetectable beyond a few light years. The same is likely true for any alien civilization, so our best hope is that they are deliberately transmitting a signal in our direction. Even then the signal would likely be very faint.

So how would we detect it? As outlined in a recent paper, it would likely take the largest telescope ever built. While most modern radio telescopes consist of arrays of smaller antennas, the Five-hundred-meter Aperture Spherical radio Telescope (FAST) takes a different route. It is a single large dish, which makes it capable of capturing faint point sources. As the paper points out, FAST is well suited to detect alien signals, and its frequency range is suitable for interstellar distances. The paper also recommends using FAST to target nearby star systems known to have potentially habitable exoplanets.

Detecting any alien signal would be a long shot, but it is worth thinking about how it might be done given the technology we have.

In Texas, The Coronavirus Causes A Specialty Coffee Veteran To Close His Cafe