Breaking
What You And Your RTO Business Need To...
4 SEO Trends for Websites You Should Not...
3 Reasons Why Desk Booking Is Rising In...
8 Tips to Play & Win at Online...
How can software benefit facility management?
Do Professional Casino Players Pay Taxes for the...
Becoming a Trading Expert: What Is the Best...
Dos and Don’ts for B2B Organisations in 2022
Should your business be using Machine Vision?
Colour Masterbatch vs Raw Pigments – Which Is...
Keeping your business moving as you expand online
Top Four Celebrities Who’ve Invested In Cryptocurrency
Why is Cloud Computing Tipped to be the...
How to Raise Money for Non-profit Organizations in...
Choosing the right theme for your WordPress Business...
A Guide to Using Celebrities to Promote Your...
Home Business ‘The Wretched’ Has Forever Redefined How We Measure Box Office Success
Business

‘The Wretched’ Has Forever Redefined How We Measure Box Office Success 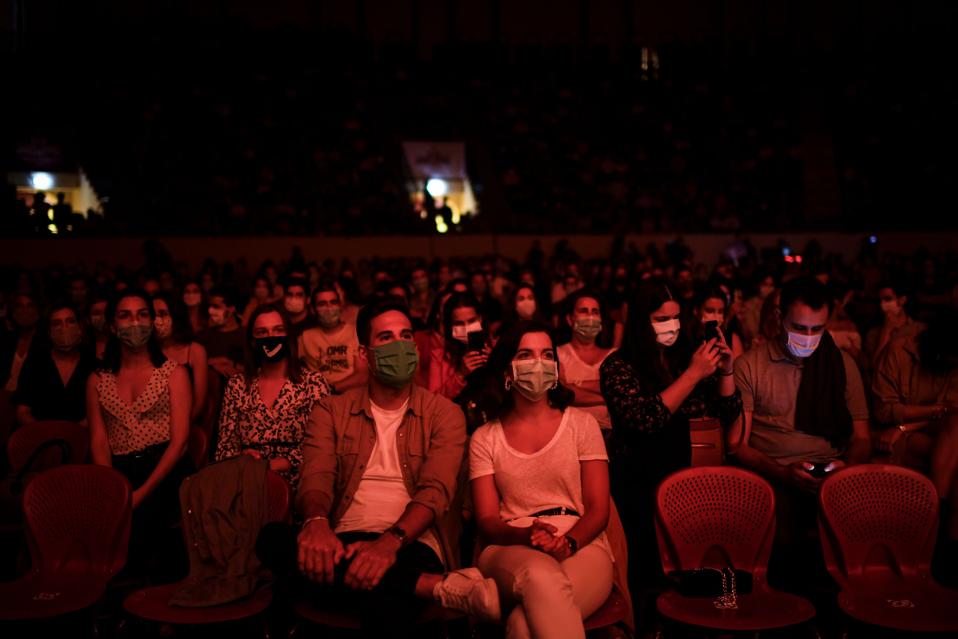 People wearing face masks attend the performing show “Deixem o Pimba em Paz” by Portuguese … [+] entertainer Bruno Nogueira at Campo Pequeno Arena in Lisbon on June 1, 2020. – After a closure of two months and a half due to the coronavirus pandemic, cinemas, theatres and performance halls reopen in Portugal, which continues its deconfinement process. Shopping centers may also reopen, except for those in the Lisbon region, where a more significant increase in Covid-19 cases occurred in recent days than in the rest of the country. (Photo by PATRICIA DE MELO MOREIRA / AFP) (Photo by PATRICIA DE MELO MOREIRA/AFP via Getty Images)

I’ll be completely clear and up front right now: it has always been easy to find interesting topics for box office news. With so many movies released each year, various projects and studios are constantly generating revenue and breaking records in the worldwide theater market.

But over the past few months…it hasn’t been so easy. In fact, it’s been impossible. COVID-19 has effectively shut down the film industry. Along with the inability to produce new movies, the very theaters that house those films have been shuttered and pushed to the brink of extinction. AMC Theaters—by far the largest movie chain in the United States—has closed over 1,000 theaters in the past three months and posted a loss of $2.4 billion in the first quarter of 2020.

Needless to say, no big-studio movie has broken any box office records over the past few months—nor will any movie anytime soon. AMC wrote that with new health guidelines in place, theater capacities will be limited and financial recovery will be incredibly difficult. In fact, AMC may not make it out of this mess at all. For the next 18-or-so-months—or however long it takes to find a cure for COVID-19—the box office cannot rely on multi-million dollar projects that drive moviegoers in mass hoards to theaters.

Which means we might have to—temporarily, anyway—redefine what makes a movie “successful” at the box office. For the foreseeable future, no movie is going to dethrone Avengers: Endgame as the highest-grossing film of all time. The box office is not going to reach the $42.5 billion record height of 2019. No studio can rely on insane international box office receipts to justify a franchise.

And if theaters never return to normal? Then that definition has be be rewritten entirely.

And The Wretched could be the first real step of that transition.

In this strange period where the box office doesn’t have much to report, The Wretched has become the sole source of news. Playing in quarantine-enabled drive-in movie theaters across the nation, the summer’s only horror movie has pulled in nearly $900,000 so far and will likely break $1 million this weekend.

During any other year? Those numbers would mean nothing. But during a time when the box office industry could face up to a 60% loss compared to 2019? It’s literally the only visible beacon of hope.

The problem is: you wouldn’t know if by just looking at the surface numbers. One million dollars in revenue is chump change for most movies. But The Wretched is truly the only viral movie hitting theaters at the moment. And while it’s not making a ton of money, The Wretched is on track to easily top IFC’s top-grossing movie in 2019, Red Joan.

IFC is a studio that has certainly found success with movies like The Man Who Knew Infinity (which pulled in $4.1 million in 2016), The Death of Stalin ($8 million in 2018) and 45 Years ($4.9 million in 2014) over the past five years. But as Hollywood’s biggest movie studios have continued to dominate the market more and more each year, the kind of financial success enjoyed by IFC movies like Boyhood ($28.3 million in 2014) and Y Tu Mamá También ($21.4 million in 2002) has become harder and harder to find.

So if The Wretched isn’t making a ton of money, then how do we measure this kind of “success”? How does a smaller studio like IFC measure success? How does this dictate what movies they choose and how they show them?

In a broader context: what does it mean that The Wretched is literally the only movie anyone is seeing during what might be the most financially trying time in Hollywood’s history?

Well, as Kevin Smith showed us in late 2019 and early 2020, it means that your movie writes a whole new page in the record books. Thanks to limited showings that featured Q&A’s from Smith himself, Jay and Silent Bob Reboot became the only movie to ever achieve an average of $30,000 per theater during its run six different times. Plenty of movies from 2019 will be remembered for achieving incredible highs at the box office—but only one will be remembered for establishing a record that may never be broken.

The same goes for The Wretched. As Scott Mendelson pointed out, The Wretched is now one of five movies to ever spend five consecutive weeks in the No. 1 spot at the box office. And if the movie can pull off the top spot again this weekend? Then it’ll join Titanic and Avatar to become one of three movies to ever achieve such a milestone.

The only difference between The Wretched and those box office behemoths? Titanic and Avatar were directed by James Cameron and were backed by millions upon millions in their budgets. Those movies thrived during a time when the box office was thriving—but The Wretched reigned supreme when the odds were stacked against the entire film industry.

IFC is the only studio that’s taken a true leap of faith in 2020 and released a film under the most improbable terms. Releasing a horror movie at drive-in theaters during a worldwide pandemic certainly won’t net you very much money—but it will capture everybody’s attention. And in the history books, that may prove to be a better story and a better definition of success than any box office juggernaut could ever hope to achieve.

The 100 Safest Countries In The World For COVID-19