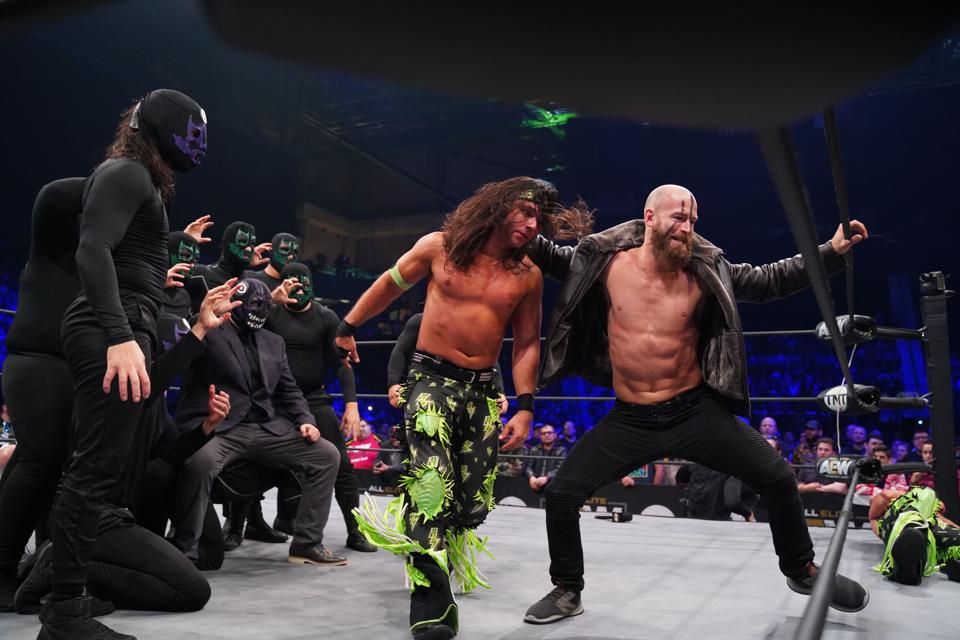 Matt and Nick Jackson have decided to take a break from Twitter amid the platform’s “toxicity.”

Matt and Nick Jackson of The Young Bucks have decided to take a well-advised break from Twitter.

Nick Jackson’s Twitter account is no longer available while Matt Jackson noted the all-world tag team would be time off from the emotionally unsteady platform. The Young Bucks’ father Matthew Lee Massie, popular known as Papa Buck, also took to Twitter and went into further details about the Executive Vice Presidents distancing themselves from social media:

It was The Young Bucks’ very social media following that allowed the duo to take an unconventional DIY approach to pro wrestling. Instead of submitting their talents to the corporate wrestling farm of WWE, where their talents and likenesses would be mass-produced (and, possibly more accurately, bastardized) on the industry’s biggest stage, Matt and Nick Jackson vlogged about their independent wrestling travels via a YouTube series—Being the Elite—that proved to be one of the first germs leading to All Elite Wrestling.

As The Young Bucks and friends continued to gain momentum, even drawing a history-making crowd for indy pay-per-view All In, AEW launched its national pro wrestling alternative amid the most positive vibes a pro wrestling promotion could hope for.

Fans bought in. Wrestlers bought in. Most importantly, a billionaire family bought in. Dating back to All In, the first batch of AEW-related pay-per-view and television tapings instantly sold out with consistency. And while AEW’s momentum is far from dead—AEW recently announced a quick sellout for forthcoming pay-per-view Revolution—AEW’s honeymoon period has certainly hit a wall after WWE NXT used strategy and endless resources to surpass the promotion in the Wednesday Night Wars.

WWE NXT’s most recent victory this past week was its most emphatic. Not only did the black and yellow brand garner over 100,000 more viewers, but NXT outranked AEW in the 18-49 demo to close out AEW.

With both promotions putting their best foot forward for their de facto season finales, NXT was easily the more critically acclaimed broadcast in addition to winning head-to-head in viewership.

To add insult to injury, the floodgates had opened as fan (and peer) criticism of AEW was not only limited to a questionable choice of installing The Dark Order as top heels.

The Dark Order’s brawl with The Elite came under fire in recent days as one particular member was exposed as throwing several phantom punches in a row. AEW’s Dustin Rhodes, Trish Stratus, Mark Henry and Randy Orton are just some of the high-profile names who have piled on the brutal spot.

If that weren’t enough cannon fodder for outrage, AEW President Tony Khan has also found himself locked in the crosshairs of cyber rage after delivering a Stone Cold Stunner to Shawn Spears in a non-televised segment once Dynamite went off the air in Corpus Christi, Tx.

Both Shawn Spears and Khan felt compelled to respond, with Khan noting he did not want to perform the move, but was convinced to do so by Spears.

As the walls of angry Twitter continued to cave in, even Cody (who can do no wrong with this fanbase) found himself on the defensive as he tweeted in response to photos of a seemingly lowly attended taping of AEW Dynamite. While we’re on the subject, AEW has reportedly run into its first batch of ticket sale adversity as tickets are reportedly moving slowly in the Ohio market.

All Elite Wrestling literally kicked off 2019 as The Elite made an official announcement on New Year’s Day. And after a strong year, all things considered, a bitter end to 2019 will make 2020 a pivotal transitional period for the national promotion.

5 Ways to Create a Culture of Care in Your Business

To Build A Great Company, You Need Trust. 10 Ways To Build Trust Between Employees Or CoFounders