There Is No Way For Soccer To Avoid The Coming Recession 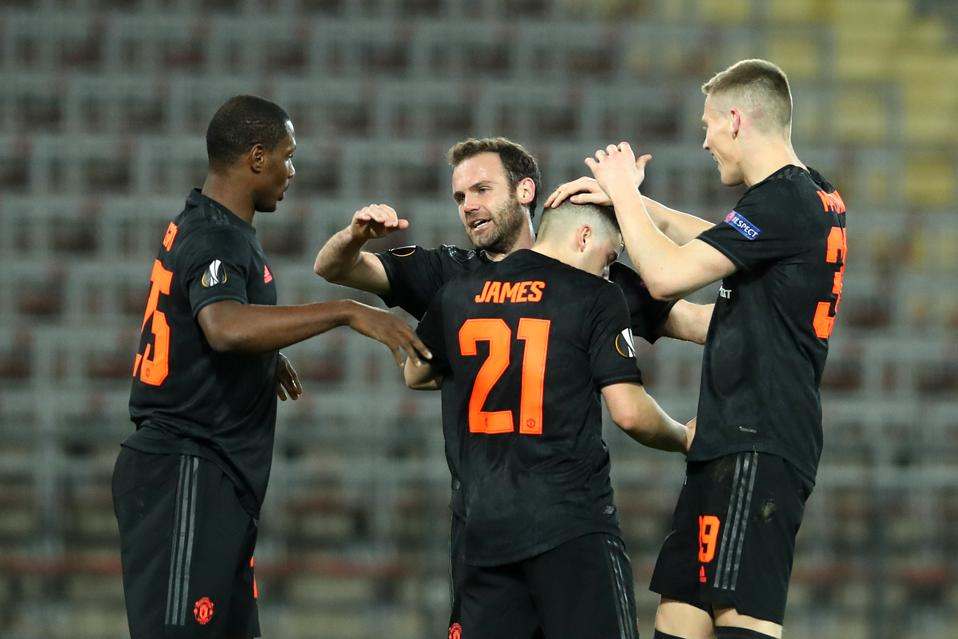 Manchester United celebrates the team’s second goal during the UEFA Europa League round of 16 first … [+] leg match against LASK in Linz, Austria. The match was played behind closed doors as a precaution against the spread of COVID-19 (Coronavirus) before the competition was put on ice. (Photo by UEFA – Handout/UEFA via Getty Images )

How do you know that a fan is under the age of 35? Answer; they’re on social media discussing transfers.

That might be a bit tongue in check, but there is a generation or more that has grown up never seeing top soccer teams having to battle anything more threatening than money being tossed at them.

Over the last thirty years, no matter the economic slumps caused by the likes of the dot-com bubble bursting or the sub-prime mortgage crisis, money has continued to flow into soccer’s coffers.

Of course, as the money flowed in, it flowed right out again primarily in the form of bigger salaries and higher transfer fees. They say that no tree grows to the sky but over the last three decades soccer has made a pretty good attempt at proving that adage wrong.

So, what we have is a generation that is treating the postponements as something akin to a spot of bad weather. In a week or two – around April 4 or so – we will wake up to a full fixture list and everything will continue as if nothing of real consequence had happened.

It’s true that things are changing by the day, sometimes by the hour or even by the minute. However, the chances of soccer escaping unscathed from this economic fall-out is zilch.

We are in uncharted territory and we have no idea how much damage will be inflicted and how long it will take for the economy to recover. We don’t even have a reasonable idea of how long the crisis is going to last.

On Tuesday, Uefa confirmed that Euro 2020 will move to 2021 (11 June to 11 July) and that CONMEBOL has agreed to do likewise with Copa America.

Uefa, and the other member organizations that participated in Tuesday’s meeting, emphasized that finishing the present season – domestic as well as the Champions and Europa Leagues – was a priority and by shifting the European Championship by a year a window for domestic competition will be created…….they hope.

The move reinforces the view that domestic leagues in Europe and around the world are facing a huge cash flow problem. Regular expenses still have to be paid but no cash will be coming through the gate. The “wealthier” the league the bigger the numbers and, for some, there is also a time-crunch.

On Monday, the Daily Mail reported that the Premier League had until July 31 to complete the 2019/20 season in order to avoid breaching TV agreements worth a total of £3billion per season. About 25% of the Premier League season has still to be played and voiding the remainder of the season could cost the 20 teams a total of £750million.

With so much TV money at stake for the Premier League, and other big leagues, there will be a big push to play games behind closed doors. However, that is predicated on the specific health conditions in each country and a willingness of national governments to go along with such a plan. That is far from certain.

The strategy might protect TV money but there are still a lot of teams that generate a significant part of their revenue from match day receipts. Here is a thumbnail look at the Premier League situation. The average may only be 13% but the income is far from insignificant for many teams.

And let’s remember the leagues that feed into the top tiers across Europe. The English Football League (EFL), for example. For the 2017/18 season the combined losses for the EFL exceeded £300m pre-tax. Once the 2018/19 season numbers are all accounted for that number is likely to be even higher. How do you survive a recession when your balance sheet is already awash in so much red ink?

Beyond the priority of completing this season there is the stark reality that in our interconnected world we are seeing payrolls shrink to a frightening degree. That is going to place severe limits on fans disposable income.

Just like other businesses around the world, the soccer business is looking into a financial abyss but one thing is for sure. Soccer will suffer financial pain and this time there will be no dodging the economic hit.

Madden 20: How To Download The Best Free-Agent And Rookie Roster