Breaking
Sunday’s Google Doodle Is Actually About Google
Office Of The Comptroller Of The Currency Chief...
Source Code For Multiple Windows Operating Systems Publicly...
Why Forgettable Pfizer Really Is A Great Value...
Hot For The Holidays? Amazon Home Drone, Kid...
Best Small Business Loans
The FAAMG Stocks Drive The Markets
Mall Of America Extends A Hand Of Unity...
Surprise Samsung Galaxy S20 FE Beats Google Pixel...
After Apple And Tesla, Berkshire And Amazon Should...
Is It Wrong To Be Rich In Poor...
‘C&C’ Is 25: How ‘Command & Conquer’ Revolutionized...
Archeologists Vs. Spirit Mediums Exhuming Human Remains In...
Blow To Bitcoin As Portnoy Warns Cryptocurrencies Are...
What an Effective Business Cloud Must Include
5 Ways to Make Running a Business Easier
Home Technology There Is Plastic In Your Fish
Technology 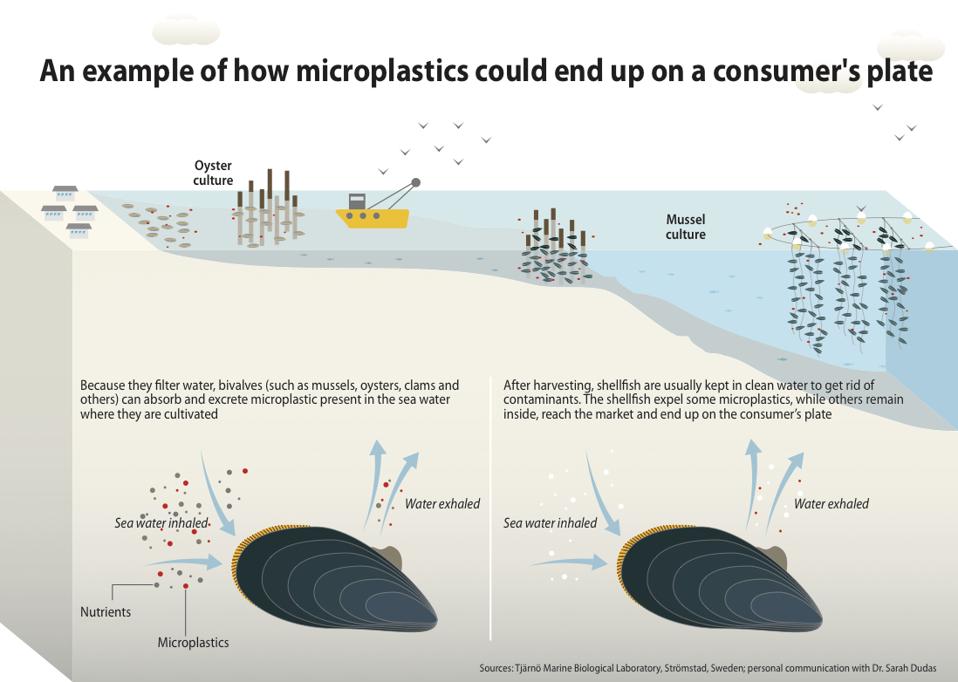 Microplastics can be ingested by marine species such as shellfish. The ingestion of marine plastics … [+] carrying concentrated toxins has the potential to bioaccumulate up the food chain and enter the human diet.

Overwhelming research shows that cutting back on red meat and increasing our intake of high-quality seafood is beneficial to our health. Fish is high in Omega-3 fatty acids which are essential fats, meaning the body cannot produce them on its own and they must be sourced from the food we eat. Omega-3 fatty acids are beneficial to heart health, are instrumental in preventing stroke and may help control a host of other health conditions. However, the flip side of eating more fish is a tiny problem 5 millimeters or less in diameter: microplastics. 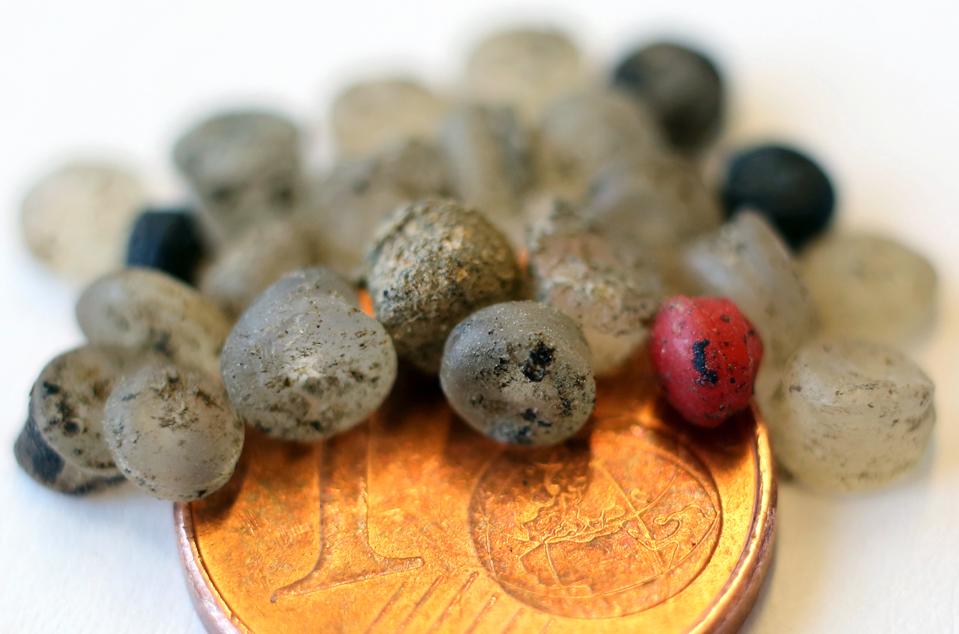 Pieces of microplastic, pictured with a 1-cent piece for scale. Plastics consumed by marine life … [+] often end up in the human food chain. (Photo by Bernd Wüstneck/picture alliance via Getty Images)

Tiny pieces of plastic called microplastics (a distinction based on size alone) are found in the ocean. Ceaselessly broken down by the elements over time, larger pieces of plastic become smaller and smaller. Microplastics are small enough to be ingested by sea animals, including those that end up on our plates. 70 years of manufacturing plastic later, we are finally starting to see where it all ends up when we toss it.

According to a 2017 UN report, there are more than 51 trillion microplastic particles in the sea, more than 500 times the number of stars in the Milky Way. Unlike plastic bags, fishing gear and other macroplastic waste, microplastics are so insidious because they are invisible to us. Research into microplastics and their effects is still in its infancy.

Where are microplastics found?

Microplastics are found everywhere in the ocean, floating at the surface, mixed in with the water column and some are denser than water and sink to the seafloor. Plastics have been discovered thousands of feet down in the deepest reaches of the ocean. Even the arctic and Antarctica have become dumping grounds for these tiny plastics. Plastic polymers contain additives such as pigments, plasticizers, heat and UV stabilizers, fillers, and flame retardants such as polybrominated diphenyl ethers (PBDEs). These additives can leach into surrounding water and potentially cause problems for environmental and human health. 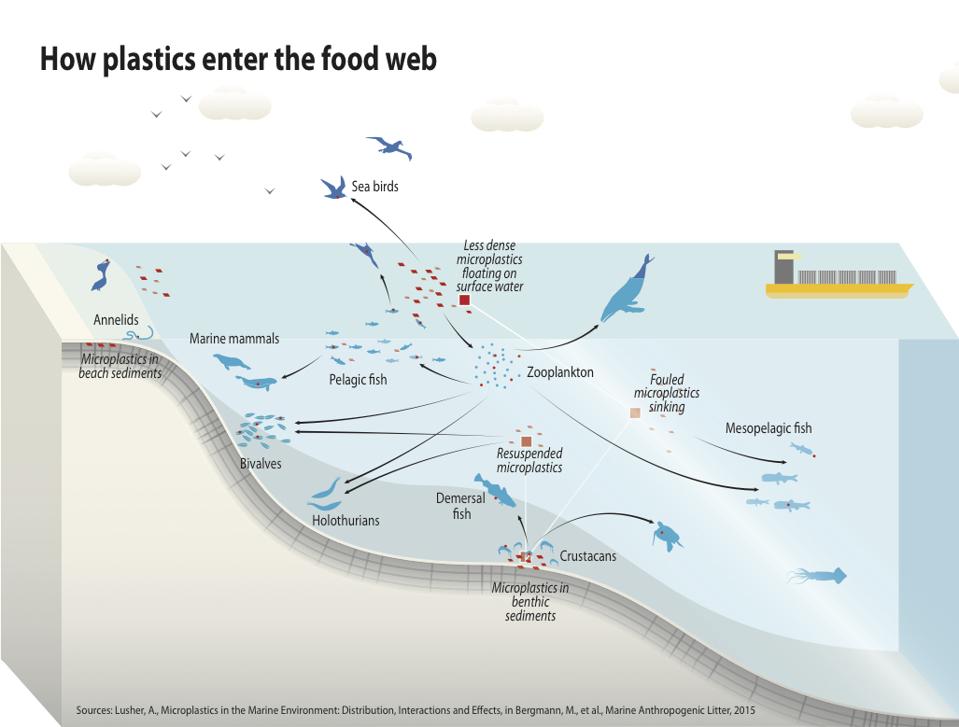 How plastics enter the food web, a visual representation of how plastics move through the marine … [+] environment.

How do they affect marine life?

Not a whole lot is understood about microplastics and their environmental effects yet. We have manufactured plastics for many decades, however the first US legislation to address microplastics went into effect for the first time at the tail-end of 2015, with The Microbead-Free Waters Act of 2015. The act targets rinse-off products such as toothpaste and bodywash, however manufacture of some products containing microbeads was allowed to continue until summer of 2019.

Current research suggests that the chemicals used in the manufacture of plastics can leach out and become ingested by marine life. Plastics are petrochemicals, meaning they are produced from petroleum and natural gas. Traveling from the digestive tract to the circulatory system and surrounding tissues. And ocean-dwellers aren’t the only ones chowing down on plastic. Microplastics are found in fresh water too. Carp and tilapia are two freshwater species that were found to ingest microplastics.

When microplastics exist in the ocean, they accumulate pollutants such as PCBs and pesticides that prefer to stick to plastic when it’s around (this is called ‘adsorbing’). The pollutants are also concentrated in this way.

New research found that chemical leaching from microplastics is also affecting our tiniest friends- marine photosynthetic algae, which play a role in producing the oxygen that we rely on to live. Plastic pollution was found to interfere with the growth, photosynthesis and oxygen production of the most abundant photosynthetic bacteria group in the ocean, Prochlorococcus.

What does this mean for all of the seafood lovers out there?

At this point in time more research is needed to understand exactly how ingested microplastics may affect human health. It is known that humans are in fact eating these tiny plastic particles, but fish aren’t the only source. Bottled water, beer, honey, sea salt and tea bags have all been exposed as microplastic carriers, just to name a few. We don’t yet know how these plastics may affect us and in what amounts they may or may not be harmful. So should we just stop eating seafood to avoid potentially eating plastic? Bottom line, questions and knowledge gaps still remain so the amount of risk one is willing to take will determine this. 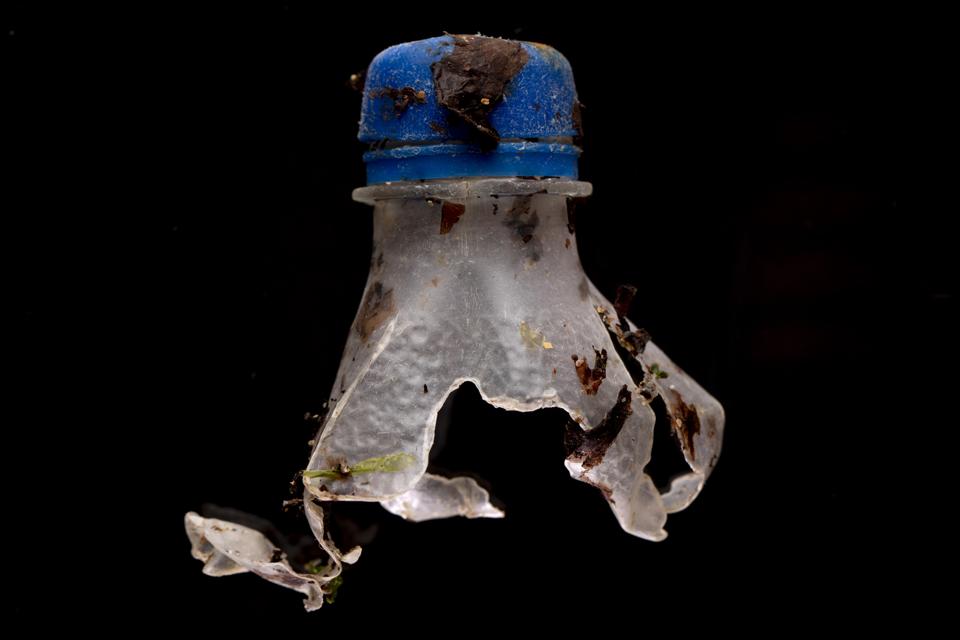 According to the United Nations Environment Programme (UNEP), at current rates of pollution, there … [+] will likely be more plastic in the sea than fish by 2050. (Photo by Dan Kitwood/Getty Images)