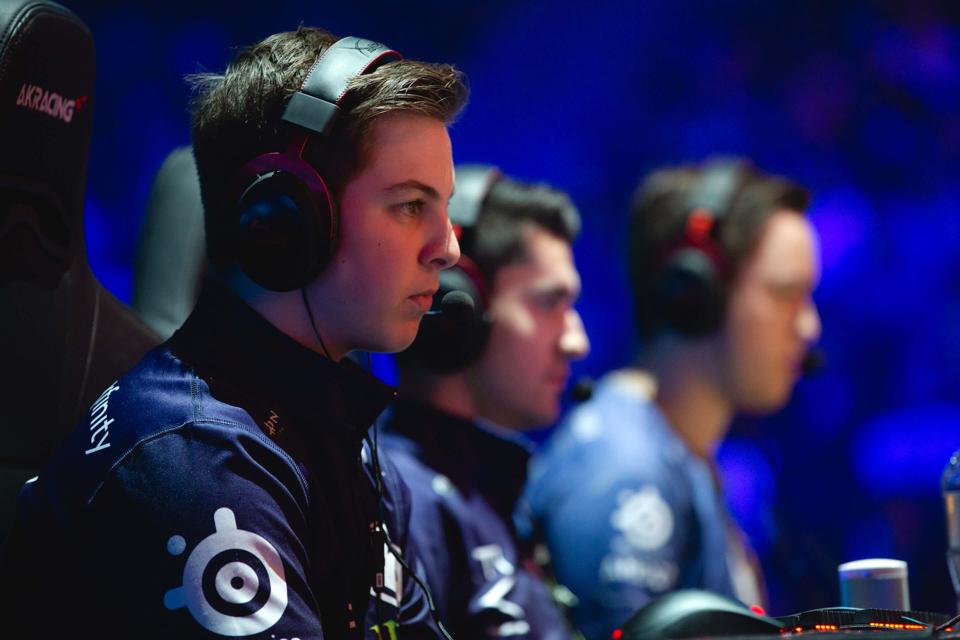 The dust has finally settled after two days of action-packed Rocket League Championship Series play, marking the end of Season 9 and the beginning of a very brief break for the players until the Rocket League Spring Series begins next month.

The weekend was primed for incredible competition. After the RLCS World Championship LAN event was cancelled due to COVID-19 concerns, Psyonix announced that the Regional Championships would be the apex of Season 9 and upped each of the regions’ prize pools to further increase the stakes.

G2 took home first place in North America, relying on their competitive experience to sweep Spacestation Gaming in the Grand Finals four matches to zero. This tournament victory wholly completes the G2 redemption arc after the team imploded and narrowly avoided relegation in Season 8. Rizzo, JKnaps, and Chicago blasted their way back into the RLCS by starting their next season 5-0 and finishing second in league play.

G2’s first match in the Regional Tournament was a semifinals bout against fellow Rocket League veterans and defending world champions NRG. It took seven games to decide the series between the two heavyweight teams, easily making it the most exciting match-up in what turned out to be a surprisingly noncompetitive tournament.

Of the six series played in the North American tournament, only G2 versus NRG took more than five matches. In every other series, the team that won the first game went on to win the series in four or five games, which was disappointing to watch after such a competitive regular season. Despite the lack of competitiveness throughout the rest of tournament, G2 came to play, earning themselves a major victory and an undeniable redemption story from their disappointing previous season.

The final bracket from the North American Regional Championship can be seen in the Tweet below, and the replay of the weekend’s matches can be seen here.

The European tournament proved to be a much more fierce competition as teams gunned to be named European Champion.

Ronaky lead FC Barcelona, the lowest-seeded squad in the tournament, to convincing victories over Veloce and Reciprocity. The team excelled through the tournament with their flashy play-style before falling to Vitality in a series much closer than the 4-1 scoreline suggests.

Similarly, many overlooked Mousesports after Scrub Killa unexpectedly left the team over contract issues just before the tournament. Instead, Arju stepped into the roster and showed off his skills with mesmerizing solo efforts like this ceiling shot. The team ended their season with a game seven loss to Dignitas, just one game win away from the grand finals.

In the end, it was Dignitas and Renault Vitality in the grand finals. At first and second place in league play, these two teams had already proven themselves as the top teams in Europe. It took a dazzling series between the two to finally crown a European Champion, with both teams pushing themselves in a series that almost mirrors the greatest RLCS series of all time. For proof of just how much effort it takes to steal a single game from an in-form Vitality, look no further than Aztral’s triple-touch goal at the buzzer.

Dignitas came out on top after six games, with two-time world champion ViolentPanda scoring the overtime goal to seal the win. It could have been either of the teams’ tournament, but the Dignitas Rocket League machine proved too consistently dominant to best.

The final bracket from the European Regional Championship can be seen in the Tweet below, and the replay of the tournament’s matches can be seen here.

Rocket League Esports always delivers a great show when the game’s top teams are put under pressure, and I can’t wait to see how the esport grows into the future.

Professional Rocket League returns next month with a Spring Series tournament every weekend between April 18 and May 9, which will showcase the South American and Oceania regions more prominently than ever before.

$349 Billion In Forgivable Paycheck Protection Loans For Nonprofits. Here’s How To Apply.