Breaking
Can You Settle Your Student Loans Or Negotiate...
How to Use Amazon Attribution For Ad Campaigns
How To Quickly Start And Scale Your Business
Terra Virtua: What NFTs Can Teach Us About...
5 Easy Steps To Prepare Content For E-A-T...
Physical Inactivity Linked To More Severe Covid-19 Infection...
The 2021 Estimated Tax Dilemma: What Tax-Return Pros...
Want To Digitally Transform Your Business? Start With...
How to Optimize Google My Business and Leverage...
Debunking Link Building Myths in 2021
How, When And Where You Can Gaze At...
SBA Opens $16.2 Billion Shuttered Venue Operators Grants...
What are the Essential Features of a Small...
Trends In Executive Recruiting That Will Help You...
The Growing Case For Banning Pesticides Linked To...
The Reopening High – But Long-Term Issues Cloud
Home Technology These Are The Most Distant Astronomical Objects In The Known Universe
Technology

These Are The Most Distant Astronomical Objects In The Known Universe 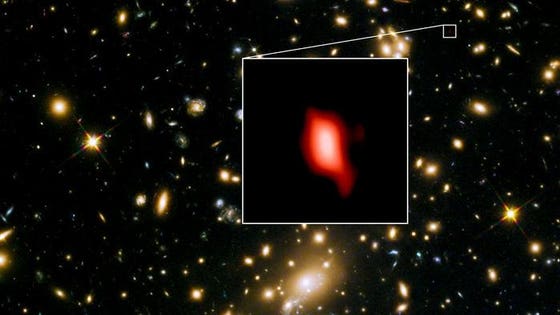 The distant galaxy MACS1149-JD1 is gravitationally lensed by a foreground cluster, allowing it to be… [+] imaged at high resolution and in multiple instruments, even without next-generation technology. This galaxy’s light comes to us from 530 million years after the Big Bang, but the stars within it are at least 280 million years old. It is the second-most distant galaxy with a spectroscopically confirmed distance, placing it 30.7 billion light-years away from us.

Astronomers have always sought to push back the viewable distance frontiers.

Although there are magnified, ultra-distant, very red and even infrared galaxies in the eXtreme Deep… [+] Field, there are galaxies that are even more distant out there than what we’ve discovered in our deepest-to-date views. These galaxies will always remain visible to us, but we will never see them as they are today: 13.8 billion years after the Big Bang.

Galaxies comparable to the present-day Milky Way are numerous, but younger galaxies that are Milky… [+] Way-like are inherently smaller, bluer, more chaotic, and richer in gas in general than the galaxies we see today. For the first galaxies of all, this ought to be taken to the extreme, and remains valid as far back as we’ve ever seen. The exceptions, when we encounter them, are both puzzling and rare.

Individual planets and stars are only known relatively nearby, as our tools cannot take us farther.

A massive cluster (left) magnified a distant star known as Icarus more than 2,000 times, making it… [+] visible from Earth (lower right) even though it is 9 billion light years away, far too distant to be seen individually with current telescopes. It was not visible in 2011 (upper right). The brightening leads us to believe that this was a blue supergiant star, formally named MACS J1149 Lensed Star 1.

As the 2010s end, here are our presently known most distant astronomical objects.

The ultra-distant supernova SN UDS10Wil, shown here, is the farthest type Ia supernova ever… [+] discovered, whose light arrives today from a position 17 billion light-years away. Type Ia supernovae are used as distance indicators because of their standard intrinsic brightnesses, and are some of our strongest evidence for the accelerated expansion best explained by dark energy.

The farthest type Ia supernova, our most distant “standard candle” for probing the Universe, is SN UDS10Wil, located 17 billion light-years (Gly) away.

This illustration of superluminous supernova SN 1000+0216, the most distant supernova ever observed… [+] at a redshift of z=3.90, from when the Universe was just 1.6 billion years old, is the current record-holder for individual supernovae. Unlike SN UDS10Wil, this supernova is a Type II (core collapse) supernova, and may have formed via the pair instability mechanism, which would explain its extraordinarily large intrinsic brightness.

The most distant X-ray jet in the Universe, from quasar GB 1428, sends us light from when the… [+] Universe was a mere 1.25 billion years old: less than 10% its current age. This jet comes from electrons heating CMB photons, and is over 230,000 light-years in extent: approximately double the size of the Milky Way.

This image of ULAS J1120+0641, a very distant quasar powered by a black hole with a mass two billion… [+] times that of the Sun, was created from images taken from surveys made by both the Sloan Digital Sky Survey and the UKIRT Infrared Deep Sky Survey. The quasar appears as a faint red dot close to the centre. This quasar was the most distant one known from 2011 until 2017, and is seen as it was just 745 million years after the Big Bang. It is the most distant quasar with a visual image available to be viewed by the public.

This illustration of the most distant gamma-ray burst ever detected, GRB 090423, is thought to be… [+] typical of most fast gamma-ray bursts. When one or two objects violently form a black hole, such as from a neutron star merger, a brief burst of gamma rays followed by an infrared afterglow (when we’re lucky) allows us to learn more about these events. The gamma rays from this event lasted just 10 seconds, but Nial Tanvir and his team found an infrared afterglow using the UKIRT telescope just 20 minutes after the burst, allowing them to determine a redshift (z=8.2) and distance (29.96 billion light-years) to great precision.

Gamma-ray bursts exceed even that; GRB 090423‘s verified light comes from 29.96 Gly away in the distant Universe, while GRB 090429B might’ve been even farther.

Here, candidate galaxy UDFj-39546284 appears very faint and red, and from the colors it displays, it… [+] has an inferred redshift of 10, giving it an age below 500 million years and a distance greater than 31 billion light-years. Without spectroscopic confirmation, however, this and similar galaxies cannot reliably be said to have a known distance; more data is needed, as photometric redshifts are notoriously unreliable.

The most distant galaxy ever discovered in the known Universe, GN-z11, has its light come to us from… [+] 13.4 billion years ago: when the Universe was only 3% its current age: 407 million years old. The distance from this galaxy to us, taking the expanding Universe into account, is an incredible 32.1 billion light-years.

The James Webb Space Telescope vs. Hubble in size (main) and vs. an array of other telescopes… [+] (inset) in terms of wavelength and sensitivity. It should be able to see the truly first galaxies, even the ones that no other observatory can see. Its power is truly unprecedented.

With the 2020s promising revolutionary new observatories, these records may all soon fall.

Our deepest galaxy surveys can reveal objects tens of billions of light years away, but there are… [+] more galaxies within the observable Universe we still have yet to reveal between the most distant galaxies and the cosmic microwave background, including the very first stars and galaxies of all. It is possible that the coming generation of telescopes will break all of our current distance records.

Bitcoin Gets A Surprise Pre-Christmas Boost