Breaking
The Impact of Internships in Marketing
3 use cases of chatbots for critical services
How To Make Working From Home Appeal To...
Tips on How to Design an Office Space...
4 Tips To Help Build Amazing Customer Relationships
How Are US Pension Funds Responding to the...
Benefits of second-hand cars for your business
4 Reasons Why Your App Needs To Undergo...
Your Guide to Online Marketing
How to find a Solicitor in London
5 car tyre and safety tips for a...
Everything You Need to Know About Corporate Social...
Is Adaptive Leadership the Key to Motivating Employees?
Why business events are set to return with...
Business events set to return with a bang!
Expanding Internationally: 5 Things to Consider for eCommerce...
Home Technology These Are The Top 10 Hubble Images Of 2019
Technology 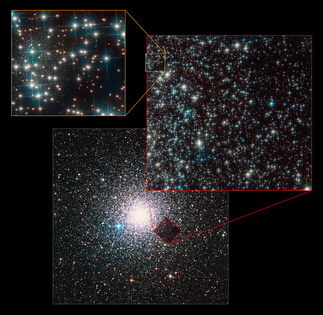 This composite image shows the location of an accidentally-discovered dwarf galaxy, Bedin 1, lying… [+] behind the foreground globular cluster NGC 6752, which intercepts its line-of-site. The lower image of the complete cluster is a ground-based observation from the Digitized Sky Survey 2. The upper right image shows the full field of view of the Hubble Space Telescope. The upper left image highlights the region containing the galaxy Bedin 1, which makes number 4 on our 2019 list.

The Hubble Space Telescope, as imaged during the last and final servicing mission. Although it… [+] hasn’t been serviced in over a decade, Hubble continues to be humanity’s flagship ultraviolet, optical, and near-infrared telescope in space.

After returning, it produced amazing science over this past year.

This small, irregular galaxy, NGC 4485, is imaged here after a recent interaction with a larger… [+] galaxy (NGC 4490), out of frame and now 24,000 light-years away from the one shown here. The pink and blue regions display a massive burst of star-formation, arising from the gravitational tug-of-war, while the normal structures at left have thus far remained intact. This galaxy is only an honorable mention this year; it couldn’t crack our list of Hubble’s top 10 for 2019.

This Hubble Space Telescope image reveals the gradual self-destruction of an asteroid, whose ejected… [+] dusty material has formed two long, thin, comet-like tails. The longer tail stretches more than 500,000 miles (800,000 kilometers) and is roughly 3,000 miles (4,800 kilometers) wide. The shorter tail is about a quarter as long. The streamers will eventually disperse into space.

10.) Asteroid (6478) Gault. This isn’t a dust-and-ion-tailed comet, but a twin dust-tailed asteroid, caught while partially disintegrating.

The graceful, winding arms of the majestic spiral galaxy NGC 3147 appear like a grand spiral… [+] staircase sweeping through space in this Hubble Space Telescope image. They are actually long lanes of young blue stars, pinkish nebulas, and dust in silhouette. The galactic disk is so deeply embedded in the black hole’s intense gravitational field that the light from the gas disk is modified, according to Einstein’s theories of relativity, giving astronomers a unique peek at the dynamic processes close to a black hole.

With over 2 decades of Hubble observations, including in ultraviolet light, astronomers have newly… [+] revealed some striking features, including streaks (in blue) emerging from the lower-left lobe. These streaks are created when the star’s light rays poke through the dust clumps scattered along the bubble’s surface. Wherever the ultraviolet light strikes the dense dust, it leaves a long, thin shadow that extends beyond the lobe into the surrounding gas.

8.) Eta Carinae. This future supernova still displays the spectacular remnants of its 1843 eruption.

The distant lensed galaxy, nicknamed the Sunburst Arc, has its light arriving now from when the… [+] Universe was just 3 billion years old. The lens magnifies and brightens the background galaxy to up to 30 times its normal apparent luminosity, revealing features as small as 520 light-years across.

The Southern Crab Nebula, officially known as Hen 2-104, is an hourglass-shaped created by a… [+] whirling pair of stars: a burned-out white dwarf orbiting a diffuse red giant that’s in the process of shedding its outer layers. The long ‘legs’ are where these gaseous outflows slam into the interstellar gas and dust, creating these illuminated structures.

The spiral galaxy D100, on the far right of this Hubble Space Telescope image, is being stripped of… [+] its gas as it plunges toward the center of the giant Coma galaxy cluster. The dark brown streaks near D100’s central region are silhouettes of dust escaping from the galaxy. The dust is part of a long, thin tail, also composed of hydrogen gas, that stretches like taffy from the galaxy’s core. Hubble, however, sees only the dust, with the brightest small, blue clump containing at least 200,000 new stars.

This is a Hubble Space Telescope image of a concentration of stars within the globular cluster NGC… [+] 6752. Hidden among the stars is an image of a background galaxy that is much farther away. The diminutive and faint galaxy, named by its discoverers as Bedin 1, measures only around 3,000 light-years at its greatest extent — a fraction of the size of the Milky Way.

This image from NASA’s Hubble Space Telescope reveals an ancient, glimmering ball of stars called… [+] NGC 1466. It is a globular cluster — a gathering of stars all held together by gravity — that is slowly moving through space on the outskirts of the Large Magellanic Cloud, one of our closest galactic neighbors. It is rich in blue stragglers towards the center: stars that only arise from the relatively recent mergers of older, low-mass stars.

As part of Hubble’s Outer Planets Atmospheres Legacy (OPAL) program, Hubble provides global views of… [+] all of the outer planets annually to view changes in their storms, winds, clouds, and spots. The winds in this image have speeds up to 640 km/hr (400 mph).

In this new Hubble Space Telescope image, an uncanny pair of glowing eyes glares menacingly in our… [+] direction. The piercing “eyes” are the most prominent feature of what resembles the face of an otherworldly creature. But this is no ghostly apparition. Hubble is looking at a titanic head-on collision between two galaxies. Each “eye” is the bright core of a galaxy, one of which slammed into another. The outline of the face is a ring of young blue stars. Other clumps of new stars form a nose and mouth. The entire system is catalogued as Arp-Madore 2026-424 (AM 2026-424), from the Arp-Madore “Catalogue of Southern Peculiar Galaxies and Associations.”