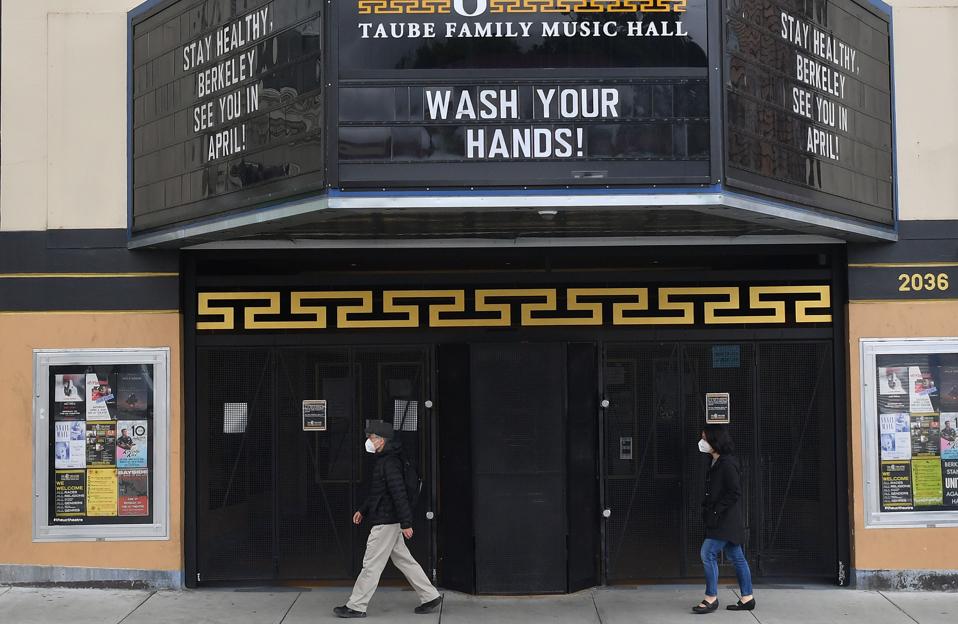 People wearing face masks walk by a closed theatre with a message about staying healthy in Berkeley, … [+] California on March 18, 2020. (Photo by JOSH EDELSON/AFP via Getty Images)

City by city, state by state, more local governments are calling on Americans to stay home due to COVID-19, the novel coronavirus. In the San Francisco Bay Area, more than 7 million people are under orders to “shelter-in-place” and only leave their homes for essential work or chores like grocery shopping until at least April 7th. On Friday March 20th, New York Governor Andrew Cuomo announced that he was asking all non-essential employees in the state to stay at home. Most other states haven’t taken these extreme measures yet, but they could be next. There’s a good reason: recently, researchers published data suggesting that strict isolation measures might be the only way to avoid a massive-scale disaster in America.

A group of infectious disease modelers from the Imperial College London published a paper last week laying out three different scenarios of U.S. response to the coronavirus, and the impact each would have on the healthcare system, number of predicted deaths, and the economy. To get to these estimates, the researchers used a modified disease prediction model that was previously used for influenza and input numbers from other research papers that have been tracking the spread of the virus. It’s important to know that these are predictions, not proven outcomes.

Scenario 1: Nothing Happens And Over 2 Million People Die 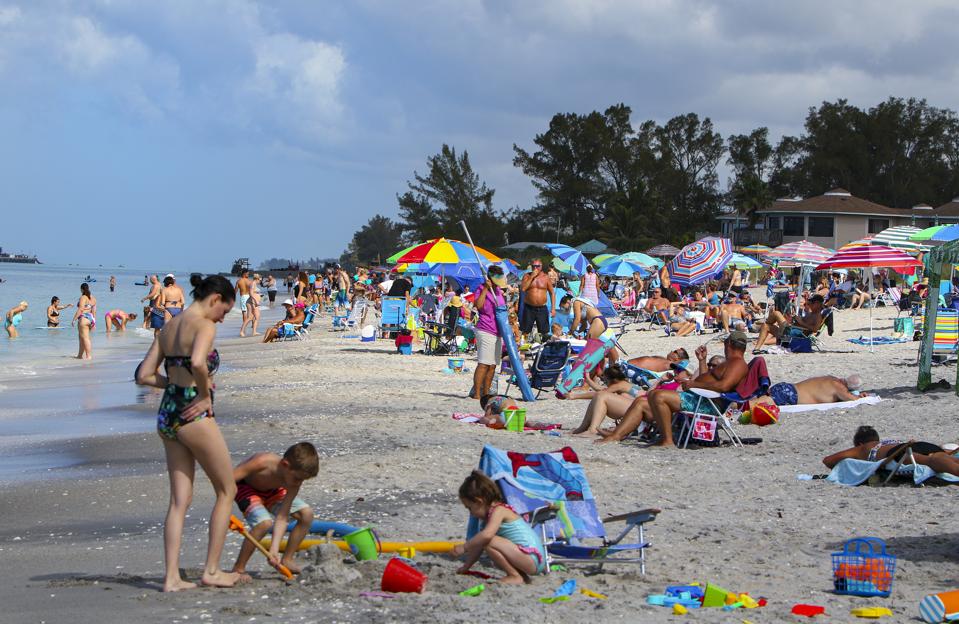 Englewood Beach in Charlotte County Florida was crowded on Saturday, March 20, 2020. The beach will … [+] be closed to the public starting at 6am, Sunday, March 21, 2020 to prevent the spread of Coronavirus. (Photo by Thomas O’Neill/NurPhoto via Getty Images)

This is the worst possible scenario. It predicts what would happen if people continue on as usual; going out to eat at restaurants, meeting with friends at bars, sitting on beaches for spring break. The results are bleak: the number of cases would peak three months from now, and 81% of the entire U.S. population would be infected during the course of the epidemic. The country would run out of critical care beds in mid-April, weeks before the peak of the outbreak. The researchers predict that in this worst case scenario, 2.2 million people would die from the coronavirus alone. That is “not accounting for the potential negative effects of health systems being overwhelmed,” the researchers write. More deaths would occur due to a strained healthcare system—heart attack patients who wouldn’t be able to get beds in the ICU, cancer patients who wouldn’t be able to get chemotherapy. This is one of the crucial arguments for

“flattening the curve” of the epidemic: a huge spike in cases would not only mean lots of coronavirus deaths, but lots of other normally preventable deaths as well. Many government leaders have already decided that this isn’t the route we’re going to take.

Scenario 2: Mitigating Disease By Isolating And Distancing Those At Risk Cuts Possible Deaths By More Than 50%

This is what the researchers refer to as “mitigation”—a plan to reduce the number of deaths, but not stop the epidemic. It involves isolating people who are sick, quarantining contacts of people who have been sick into their homes, and having people in the most at-risk groups (the elderly and immunocompromised) practice social distancing. The researchers say that this would have to be done for at least three months to meaningfully reduce the number of deaths from this virus. This is where a lot of states are right now. They’re preventing mass gatherings, telling people who are sick to stay home, but not ordering people to stay inside. Unfortunately, says Isaac Bogoch, an infectious disease researcher at the Toronto General Hospital Research Institute who was not involved in the Imperial College study, the paper shows that “mitigation strategies may not be sufficient.”

While this would halve the number of deaths to 1 million, the Imperial College researchers predict,  it would still cause the need for 8 times more hospital beds than the U.S. can provide.

Scenario 3 is what the modelers call “suppression,” the only way to not only prevent the most deaths, but also the only way our healthcare system doesn’t get overwhelmed. It’s extreme. It calls for closing all schools and universities, isolating confirmed cases, quarantining contacts of those cases, and requiring everyone in the general public to practice social distancing. This is the “shelter-in-place” ordinance that’s happening in the San Francisco Bay Area right now where no one leaves their houses unless they have essential duties. “The larger the intervention for the longer the time, the more successful we will be in reducing community transmission,” Bogoch says.

For several months at the peak of the outbreak in China, officials there took an even more severe approach. Transportation in and out of the hotspot of Wuhan closed, private vehicles needed permissions to drive the roads, and in some places residents weren’t allowed outside their houses at all (food and medicine was delivered). The lockdown was gruelling for millions of citizens, but it also seems to have worked. On Friday March 20th, China reported no new COVID-19 cases from local transmission from the second day in a row.

Such stringent measures may be unlikely in America. “One of the challenges with suppression strategies,” Bogoch says, is that they are “really challenging to maintain for a long period of time.”

There are also a fair amount of critics when it comes to harsh suppression tactics. Some are worried that a long period of social distancing will hurt the economy, while others say that the strict measures in China could have actually contributed to faster disease spread since everyone was crowded in one place together.

“We need to be prepared to be kind of hunkered down here until we have therapeutics, vaccines,” says Krutika Kuppalli, vice chair of the Global Health Committee at the Infectious Diseases Society of America.

With COVID-19 Coronavirus Social Distancing, What To Do About Alcohol