Breaking
Is An Internet Service Provider Revolution On The...
Why Selecting The Right Chairs And Tables For...
Walgreens Stock Looks Attractive At $35
How To Get CEOs And Board Directors Leading...
Bitcoin And Blockchain Are The ‘Future’ Of Twitter,...
COVID-19 Pandemic Has Birds Changing Their Tune
Beat Zoom Fatigue With These 6 Tips
How To Sustain (Or Sabotage) A Customer Service/Experience...
How, When And Where You Can See A...
New $2.2 Trillion Stimulus Bill Proposed—$1,200 Stimulus Checks,...
Why Do We Do What We Do? Manipulating...
California Brand Goes All-American As Amazon Bans Foreign...
The 3 Best Analytics Companies of 2020
Senator Cory Booker: Supporting Small, Minority-Owned Businesses Will...
Trump’s Taxes Are Finally Leaked—What’s Next?
Washington Heats Up Ahead Of First Presidential Debate:...
Home Entrepreneurship This Ain’t Your Grandfather’s Lettuce: Meet The Farm Of The Future
Entrepreneurship

The vegetable farming of the future look very different from the fields of lettuce and other crops you’ll find in places like California’s Salinas Valley today, according to Daniel Malechuk, the 38-year-old CEO of Kalera, a vertical farming company based in Orlando, Florida. 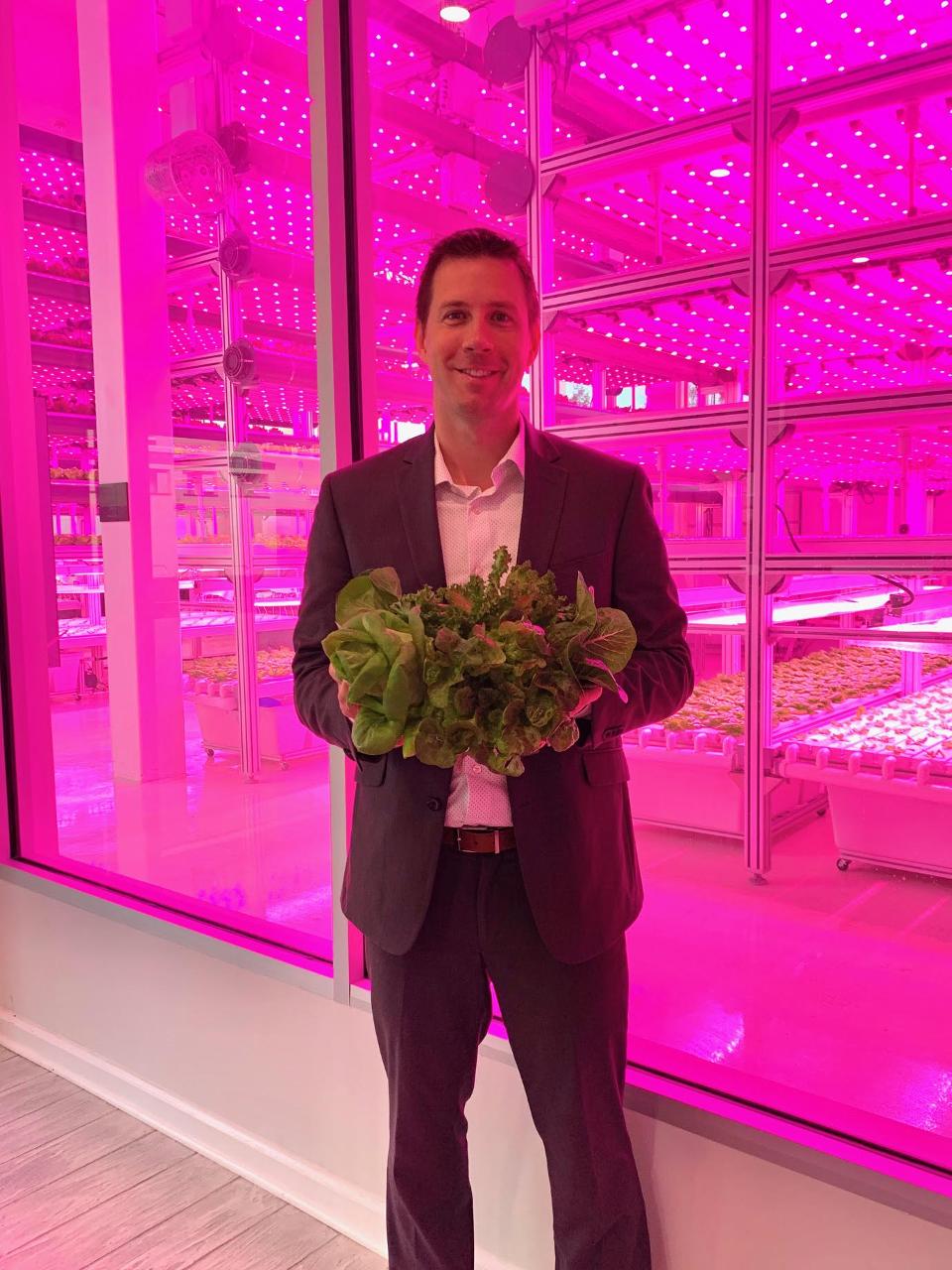 Daniel Malechuk, CEO of Kalera, a vertical farming company, with a head of lettuce.

Kalera claims to have adopted cleanroom technology from the semiconductor industry, ensuring that the plants in the growing rooms, bathed in a surreal pink-purple light, are never exposed to animal or human pathogens. As a result, pesticides are never used. Not an unimportant claim considering the travails Romaine lettuce has suffered in recent months as a result of contamination.

Kalera’s vertical indoor farms also utilize a closed loop irrigation system that cuts water use by 95% compared to those fields in California, according to Malechuk. Kalera is scheduled to open a 33,000-square-foot facility in Orlando in February, which Malechuk describes as the largest indoor growing center in the southeastern United States. 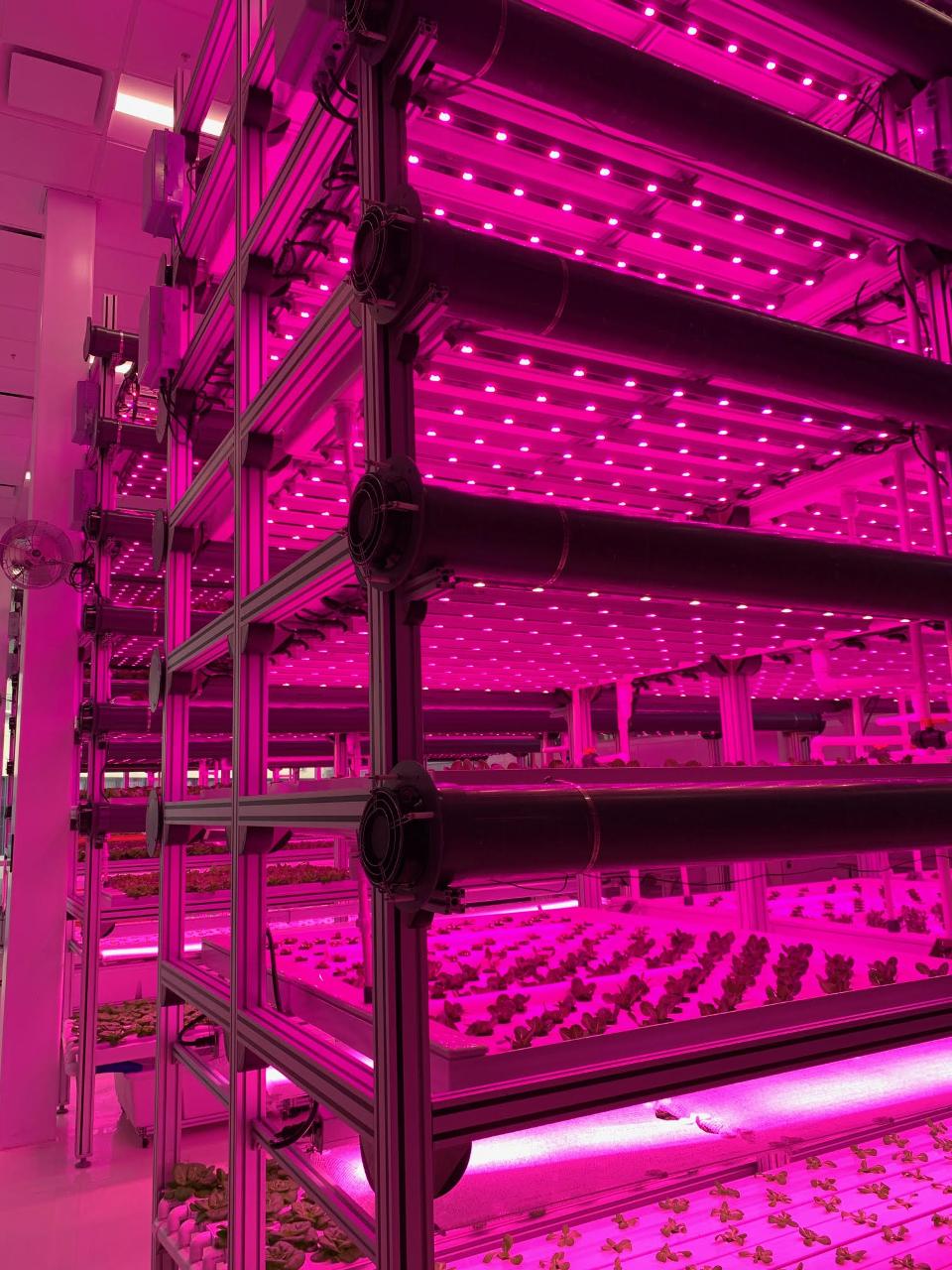 Kalera builds towers with racks of lettuce. No soil or pesticides needed.

“When you walk in it’s racking from floor to ceiling with multiple layers of plants,” Malechuk said. “We’re 100 times more efficient than traditional farming, and we use five percent of the water.”

Kalera also claims the advantage of being close to its markets, drastically cutting transportation costs, along with the carbon footprint of its harvest. Malechuk points out that lettuce starts to die the second you cut it; and that it can take 10 days for a head of lettuce to travel the nearly 3,000 miles from California to the East Coast.

“Our vision is to quickly and rapidly bring food to people exactly where they are in a much more healthy, sustainable manner,” Malechuk said.

There is no soil involved in Kalera’s growing process. The roots of the lettuce grow directly in free flowing water, with nutrients added. The totally closed system eliminates the possibility of contamination from E. coli, according to Malechuk.

Malechuk has what he describes as “massive expansion plans” for Kalera, not only in the United States but also around the world. The key, he says, will be a franchise model that will make indoor farming as easy as “copy and paste.”

The new look of farming, as Kalera sees it.

Malechuk envisions Kalera moving into “food deserts” in cities like Detroit, where his parents grew up.

“After we decide to go somewhere we can produce millions of heads of lettuce, not taking up any land,” Malechuk said.

There are plenty of empty warehouses in Detroit where Kalera could build a vertical farm, he said.

“A whole lot of smart people spent years researching how to make this happen,” he said. “Not just Kalera, but key partners driving lighting costs down, figuring out the right seeds and right varieties to grow; countless hours of analyzing the right mix of water and nutrients.”

“I like to think we’re on the cusp of one of the most incredible evolutions we’ve ever gone through.”

Blair Damon Is Helping The Homeless One House At A Time