This Colombian Scientist Hunts The World’s Most Valuable Resource: Water! 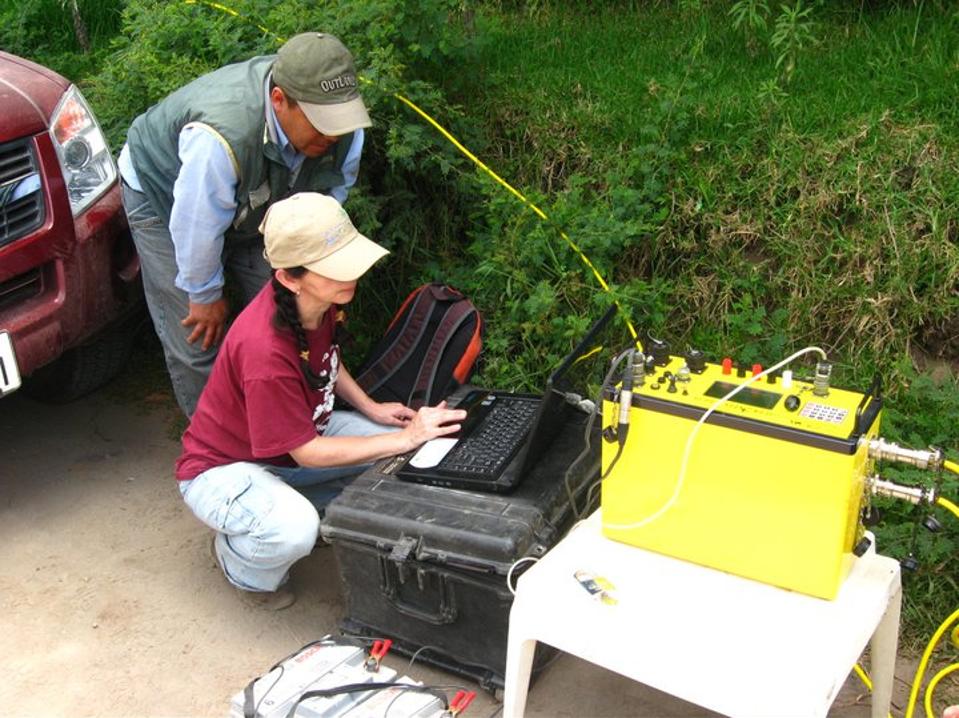 Miriam Rios-Sanchez, carrying out geophysical surveys to find the water table finding how fractured … [+] the aquifer was in the Puembo-Pifo area, of Quito, Ecuador in 2009.

Born and raised in Colombia, Miriam Rios-Sanchez, was pursuing a major in Geology being trained as a volcanologist before a quirk of fate took her in to the field of hydrogeology, the study where and how groundwater moves through the Earth’s crust.

Rios-Sanchez says that she grew up as one her family’s seven children in Colombia’s coffee-growing region and at an early age moved to the city of Manizales, which has been always connected to the Nevado del Ruiz volcano.

“Things changed because of a couple of classes I took and a hiccup with the undergrad research project, so I ended doing an internship in groundwater studies – I loved it,” she said, “Before finishing the internship, I got a job offer as junior hydrogeologist.”

“My first project was a groundwater exploration project in one of the most important areas for banana plantation in Colombia: the Uraba region,” she said, “This region had been one of the most affected areas by the presence of guerillas but the team learned how to navigate the area, deal with safety issues and complete the project.”

She is now an Assistant Professor at the department of Geology at Bemidji.State University in Minnesota, USA.

“Everyone needs water. Groundwater accounts for 30% of global freshwater. Moreover, 30% of the freshwater consumed by humans comes from aquifers.

Rios-Sanchez says except for local aquifers providing water for cities or industrial regions, most of the aquifers on mountainous terrain of Latin America do not have enough information to develop plans for sustainable use and management.

“Research projects have been developed to describe aquifers locally, but the regional, watershed-approach is not very commonly applied,” she said. “Groundwater is a hidden resource, so I focus not only on studying it, but making it visible to people, so they realize they have a resource that is worth to study and protect.”

But groundwater isn’t just a source of life-giving water, it can be a deadly hazard too.

Rios-Sanchez says that in mountainous areas, extreme precipitation events trigger can landslides, but that hazard mitigation requires identification and characterization of triggering factors. Groundwater is one of those factors that is poorly understood and, in many cases, neglected.

Rios-Sanchez says not only will the climate crisis make these kinds of disasters more frequent and severe, it will have a range of impacts on groundwater.

“Climate change adaptation will require in many instances finding new sources of water for drinking purposes, for agriculture and other uses, she said, “Groundwater from deep storage systems could be a good alternative since is less vulnerable to short term changes in precipitation patterns.”

Rios-Sanchez says although shallow aquifers are the most common source of groundwater, these aquifers are more vulnerable to climate changes and pollution events.

“Groundwater from deep aquifers in the other hand is better protected to events of contamination such as caused by the widespread use of fertilizers or point sources such as oil spills, leakages and more,” she said.

Rios-Sanchez says the biggest challenge was finding the right opportunities for her education within the field.

“When I graduated, there were no specific master’s programs in groundwater sciences in Colombia and no Ph.D. programs.”

According to Miriam Rios-Sanchez, there are few masters programs related to Earth Sciences and she doesn’t know of any school awarding PhDs in groundwater sciences.

“After coming back to Colombia from my master’s, it took me five years to find a Ph.D. program with funding in the US,” she said, “The biggest opportunity by doing hydrogeology has been being able to travel, work and teach in different regions of Colombia, different countries of Latin America, and the US.

Is MS Dhoni’s Legendary Cricket Career With India Over?

Forget Samsung’s Galaxy S20, This Is The Smartphone...