Breaking
How To Get Your Startup Business Off The...
How To Create A COVID Safe Construction Site
How to Make a Good First Impression at...
China Shipments To The U.S. Are 7 Times...
Reviewing ‘The iPhone Of Air Conditioners’
AARP BrandVoice: The Doctor Will See You Now,...
ThoughtSpot’s New Cloud-Based Tool Aims At Boosting Growth...
10 Ways Service-Based Businesses Can Generate Positive Word-Of-Mouth...
Report: Struggling Black-Owned Businesses Need More Government Grants
Why The Fed’s Outlook Paints A Sobering Picture...
As The End Of 2020 Approaches, The Cybersecurity...
Do Businesses Have A Role In Solving Poverty...
Young And Powerful: She The Change
Want To Attract (And Keep) The Right Clients?...
Best Legal Practices For Reopening Sports Venues During...
Why Now Is A Good Time To Start...
Here’s Why Texas Instruments’ Stock Growing Almost 2x...
LinkedIn’s 50 Best Startups To Work For In...
3 Marketing Mistakes Holding You Back From Hitting...
Home Technology This Company Wants to Create Single Sign-On For Hearing
Technology

This Company Wants to Create Single Sign-On For Hearing 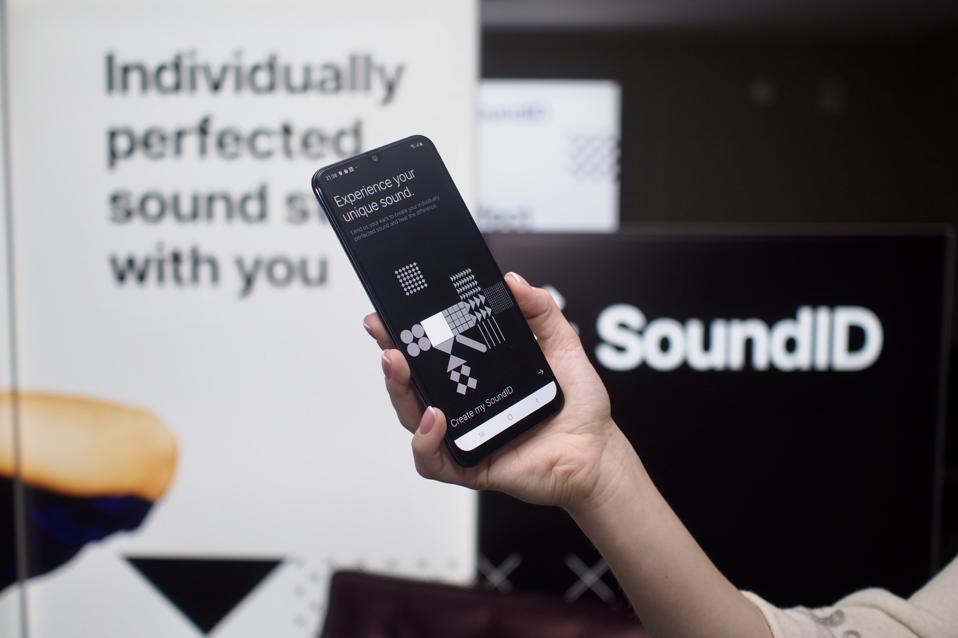 Sonarworks’ SoundID tailors sound just for you, and it’s portable to any device, music platform, and … [+] pair of headphones… in theory.

Most of us don’t think too much about the sound we’re hearing from our headphones. We just know what sounds good and what doesn’t, and obviously gravitate to the former.

What if I told you there was a technology that could make all headphones sound just as good — a sound specific to you, tailored to your preferences? Well, it exists: It’s called SoundID, and I experienced it first-hand at CES 2020, Playing the same song through plush high-end headphones and some cheap analog cans sounded almost identical.

The Latvia-based company behind the tech, Sonarworks, specializes in creating software that helps calibrate equipment in music studios. When the company turned its eyes to the consumer market, it quickly realized the neutral or “flat” frequency response that music producers prefer wasn’t the goal.

“We’ve done the research — different people like different sounds,” says Martins Popelis, co-founder of Sonarworks. “This one-size-fits-all approach to trying to build the best possible sound for somebody is really a dead end.”

If everybody has different preferences with regard to music, how do you account for them? This is where SoundID comes in: the app walks you through creating your own acoustic profile, playing clips of generic tracks, repeating them with the sound tweaked, and asking which ones you prefer — just like an eye test, but for sound. When you’re done, the software knows how to adjust audio just for you.

Even better, it can adjust audio based on your headphones. The app has access to a vast library of headphones; after you tell it which model you have, it can tweak the sound to match. That way, your music sounds consistent from pair to pair (at least within their acoustic capabilities).

And it works, at least at a demo. After setting up my SoundID on a demo iPhone, I listened to Radiohead’s “High and Dry” through some inexpensive Sony headphones. Raw, the music was tinny, with smushed bass, but SoundID made the whole soundstage sound much larger, and the guitar much cleaner. In short, it was better.

The best part was the experience was portable. Using the SoundID I set up, I listened to the same track over some much more expensive Focal headphones. Here, the raw music sounded very good already, but the SoundID still found room for improvement, making the acoustics sound slightly — but noticeably — more open.

“We really envision this becoming an ecosystem,” says Popelis. “You can kind of log into different devices with your SoundID, and you can actually have a consistently good personalized sound experience — for yourself.”

In theory, once you have a SoundID, you could use it with any device, service, or pair of headphones. The only (major) issue is those things need to support it, and right now not much does. The ideal solution is the platform: Where you open up your settings on Apple Music or Spotify, and upload your SoundID — similar to a single sign-on, but for audio — but whoever operates the service would need to enable it.

A hardware alternative would be to install your SoundID directly on your headphones, and Sonarworks already has a partner for that: 1More. The headphone company intends to start integrating SoundID into its hardware by the end of 2020.

SoundID might never get the support it needs, and considering a similar idea from Creative Labs never took off, Sonarworks certainly has an uncertain road ahead. But the vision — your own ideal sound applied to everything you listen to, making headphones, codecs, and playback devices almost irrelevant — is tantalizing to think about.  And it works, at least to my ears. Which is kind of the point.