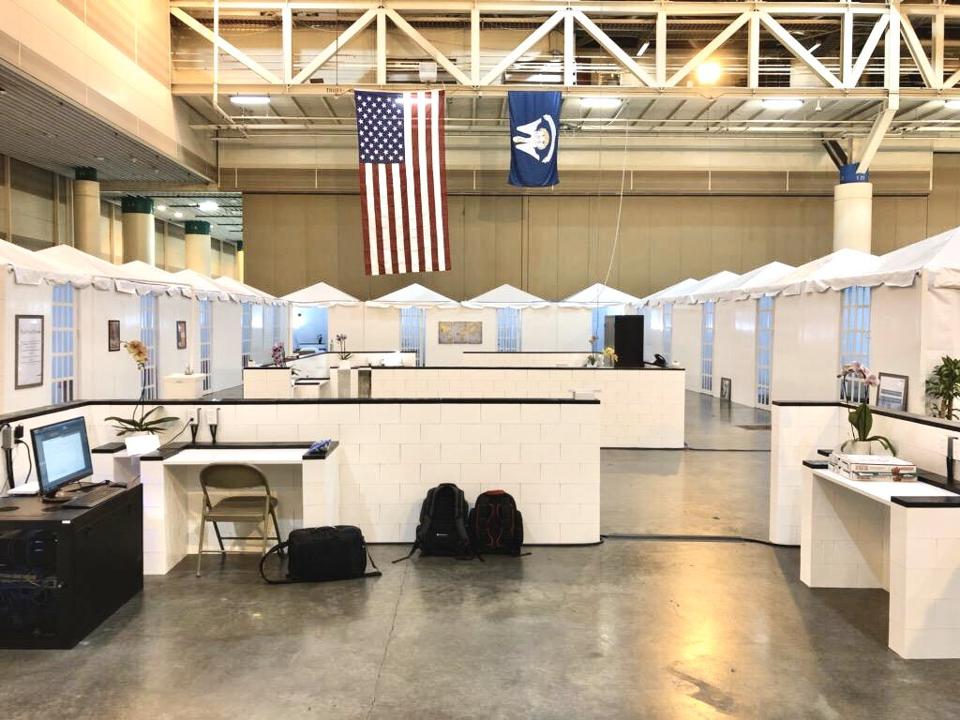 Arnon Rosan manufactures giant Lego-like building blocks, which can be converted into furniture or walls for offices, classrooms, and military training operations. They’ve been used to build a life-sized ice castle in New York City’s Bryant Park and a 17-foot-tall menorah in Washington, D.C. But now his company, EverBlock Systems, is sending truckloads of plastic blocks and interlocking wall units from New York to Louisiana to build a temporary hospital for coronavirus patients.

“We don’t wish for disaster, certainly,” Rosan says of the virus sweeping the country. “But we’re happy to be able to respond with something that we know people need and solves the problem quickly and efficiently.”

State and federal governments and health systems across the United States are scrambling to find space to treat patients as coronavirus cases have quickly overwhelmed emergency rooms and ICUs. Convention centers and arenas from Los Angeles to Philadelphia are being transformed into temporary hospitals, as are outdoor spaces, such as New York City’s Central Park.

The one thing all these places have in common? “They have enough room to set up safe and appropriate working environments for the medical staff … and the equipment and supplies that are needed,” says Dr. Irwin Redlener, Director of the National Center for Disaster Preparedness at Columbia University.

For his part, Rosan is busy working to fulfill an order to build 2,000 patients pods and 130 nurses stations for the field hospital under construction inside the Ernest N. Morial Convention Center in New Orleans.

Louisiana-based Dynamic Construction Group, the primary contractor on the hospital project, tapped EverBlock on March 26 to provide its products. At that point, Rosan had a head start: there were nearly a thousand wall panels and 60,000 blocks in his company’s warehouse ready to load onto the 53-foot trucks that would take them down to New Orleans. But he’ll need to provide a lot more. Rosan estimates the total project will require close to 6,000 panels and 150,000 blocks. In addition to 13 full-time employees, he’s recently hired 9 temporary workers to help scale up production at the company’s manufacturing facility and warehouse in the Bronx.

“We’re being asked to deliver a year’s worth of product in one month,” says Rosan. Though his usual orders have dried up, he’s already expecting EverBlock’s revenues to more than double from an expected $7.5 million to more than $20 million by the end of this year. The convention center contract alone will likely come in well above $10 million, he says.

This isn’t Rosan’s first time supplying material for disaster relief projects. His previous company Signature Systems Group, which he founded in 1999, manufactured temporary floor and roadway systems that could gain access to remote sites, such as oil rigs. Rosan says he supplied modular floors for tents used by the National Guard following Hurricanes Katrina, Ike and Sandy. He also worked on the flooring for a tent project for the World Food Programme in Haiti after the earthquake.

In 2013, he sold Signature Systems Group to a private equity firm and was looking for something new to keep busy. He declined to disclose the deal price, but said at the time of the sale, the company had around $90 million in revenue. His current company began as a side project — the idea for developing the company’s giant blocks came from his kids. But when customers began to realize their potential, the company took off.

“People seem to just engage and resonate with this concept of ‘Wow this oversized building block. I can build anything,” he recalls. 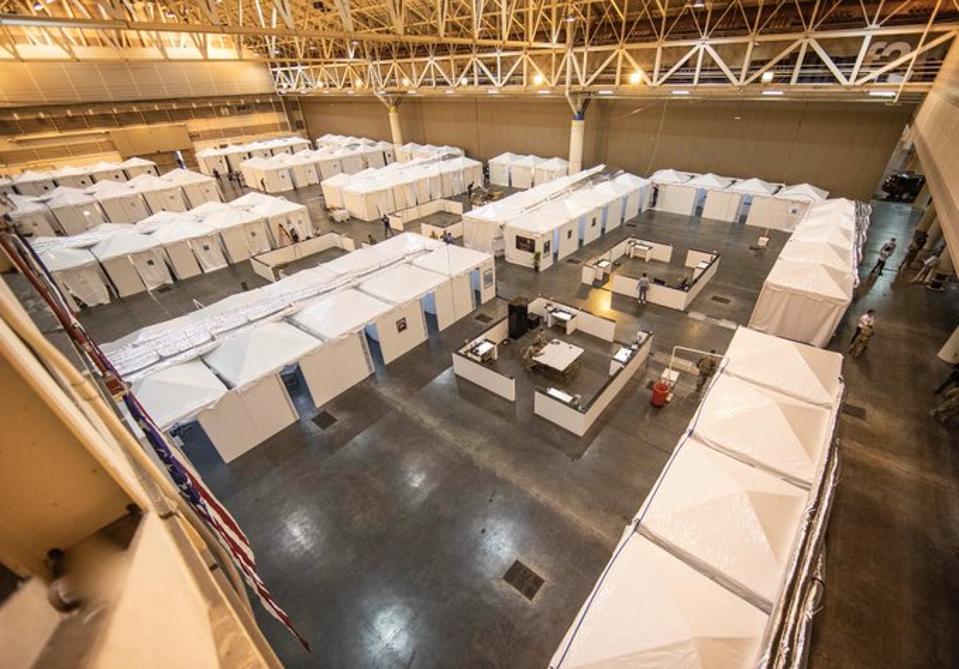 Inside the Ernest N. Morial Convention Center in New Orleans.

EverBlock is delivering the walls and blocks that make up the tented structures in which patients will sleep. Each pod is an individual chamber that will have its own ventilation duct to ensure that patients with different viral loads are kept separate. Dynamic Construction is working on the ventilation, electrical and all of the other construction components needed to make the temporary hospital function.

“These beds will be for patients who are not fragile. They don’t need to be on a ventilator, they don’t need an ICU bed, but they still need to be hospitalized,” Louisiana’s Democratic Governor Jim Bel Edwards said earlier this week at a press conference outside the convention center. While the original plan had been to care for 1,000 patients at the facility, Edwards had to quickly double that number a few days later in response to the surge in patients. The goal now is to have 1,000 beds set up by early next week and the full 2,000 beds by April 20.

“My philosophy is when these things happen, you have to react in real time,” Rosan says. “That’s something that we’re just really good at — that quick rallying of resources to make it happen.”

How To Get, And Give, Paycheck Protection Program Loans Through The SBA

Forget Apple And Google—Here’s The Real Challenge For...