Breaking
Everything You Need to Know About Corporate Social...
Is Adaptive Leadership the Key to Motivating Employees?
Why business events are set to return with...
Business events set to return with a bang!
Expanding Internationally: 5 Things to Consider for eCommerce...
How the Machine Shop Is Going Digital in...
Sustainable Food Packaging Is Helping the Hospitality Sector...
Top 5 Investment Practices To Make More Money...
Managing IT Requirements for SMEs: 5 Aspects that...
How To Build a Successful Luxury Brand In...
Finding The Best Google AdWords Consultant for Your...
8 Top Tips To Help Your Agricultural Business...
Three Reasons Why Office Décor and Design Are...
Looking To Improve Efficiency In Your Business? Here’s...
AI and machine learning for business
How Social Media Changed the World
Home Technology This Indonesian Scientist Studies The World’s ‘Newest’ Orangutans
Technology

Puji Rianti’s skills as a geneticist and her passion for conservation have made her a researcher at the IPB University in Indonesia, studying the genetics of the Tapanuli orangutan, which is only found in a small area in Northern Sumatra.

Rianti was a co-author of the paper that in 2017 described a new species of great apes, the Tapanuli orangutan, Pongo tapanuliensis, which were spotted in the area in 1939 but not rediscovered until 1997.

“When I was a girl, I had many dreams of a careers – to be a teacher, a police detective, an archaeologist, even a radio announcer and an artist!”

“But I always had a dream to research in the field with primates. During my study in the university, I had several opportunities to live that dream as a research assistant,” Rianti said. “I think being a scientist is not always about being a nerd, but about having an excellent communication and negotiation skills.”

Then she eventually became a primary researcher of a project, which she said the biggest dream came true.

Her field and genetics experience gave her the opportunity to work in one of the most intriguing scientific questions in the region.

“It’s always been a big question: how and why can only we have orangutans as Asia’s big apes, living only in certain areas in Sumatra and Borneo,” she said, “What evolutionary moment shaped that?”

Rianti also said that there is plenty that we can learn about the evolution of human behavior and culture through this “far sister” in own primate family.

“My work began as a chunk part of these questions, especially the evolutionary genetics part that shapes the orangutans’ population nowadays,” she said, “My study also generates databases for population identification purposes – within and between populations and species in Sumatra.

According to Rianti, together with the most significant research consortium of orangutans, she and her fellow researchers were finally able to prove the genetic and behavioral uniqueness of a certain population of Orangutans in Tapanuli in northern Sumatra, culminating in naming a newly named species.

“Now, most scientists and conservationist are also interested and willing to study this species, but genetically we still lead in the project because of our expertise and laboratory tools availability,” she said.

According to Rianti, even though the Tapanuli orangutan was announced as a new species of orangutans in Sumatra only in 2017, the population is already facing so many threats and life challenges just to keep existing.

“It is also challenging to find an individual in the wild, as their appearance is influenced by the availability of food and suitable habitats,” she said.

“As a scientist and conservationist, I have learned to open my eyes, my ears, and my heart.”

In terms of lessons of others in the global south, Rianti says if we want to conserve and safe our natural environment and biodiversity, we need to help people in the area.

“They are the one who will keep the habitat safe and sustain. Because it’s their home habitat, their life and work, and we shouldn’t give up,” she said. 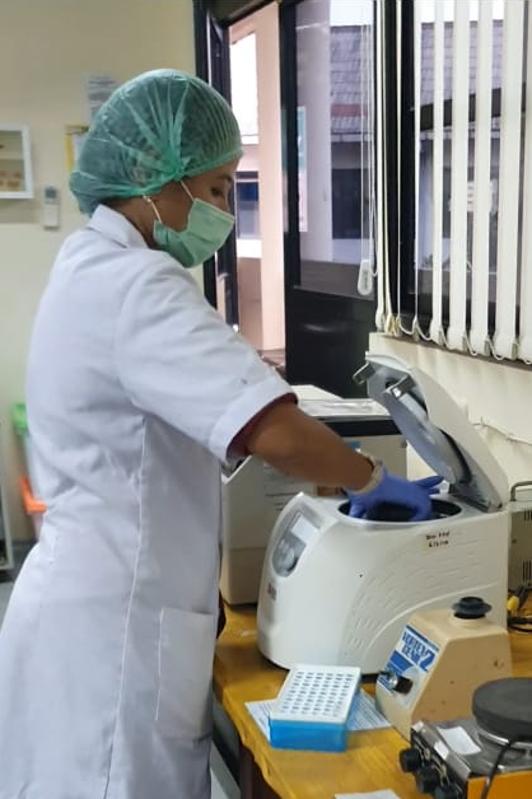 Puji Rianti carries out laboratory work at the genetic lab of the Department of Biology IPB … [+] University at IPB University in Bogor, Indonesia

Rianti is just one of many women making an impact in science and communities in Indonesia. Another is Monica Nirmala is an Indonesian dentist who is now a masters student at Harvard’s School of Public Health.

RELATED: How Paying Your Doctor In Seeds Helps Save The Rain Forest

She has helped Kinari Webb – medical doctor and founder of Health In Harmony to reduce deforestation and provide equitable access to healthcare through Project Alam Sehat Lestari (ASRI) in the village of Sukadana on the edge of the Gunung Palung National Park in western Borneo.

In order to reduce the impact of health emergencies on the deforestation, the villagers can pay for their healthcare at the clinic with seeds, handicrafts and other non-cash payment options.

Health In Harmony figures show the number of logging households in the community has dropped by 89% over the last 10 years and in the first five years of the program infant deaths per 100 households declined 70%. The community now also has an ambulance.

The 10 Most Comforting, Feel-Good Netflix Shows To Watch In Lockdown