Home Finance This Or That? Comparing Payout Rates Of A Fixed Annuity Vs. Investment Portfolio Distributions
Finance

This Or That? Comparing Payout Rates Of A Fixed Annuity Vs. Investment Portfolio Distributions

This article is part of a series; click here to read Part 1.

Retirement spending goals are often expressed in terms of inflation-adjusted spending numbers. This is what the 4 percent rule-of-thumb assumes. But as we move the discussion toward annuities, many annuities will protect a fixed amount of spending without inflation adjustments. It is not appropriate to compare the payout rate for a fixed annuity payment to the sustainable distribution rate from an investment portfolio that assumes inflation-adjusted spending. As such, Exhibit 3.14 repeats this analysis using the nominal portfolio return assumptions from “The Building Blocks of Portfolio Returns” which include a 6 percent return and a ten percent standard deviation. 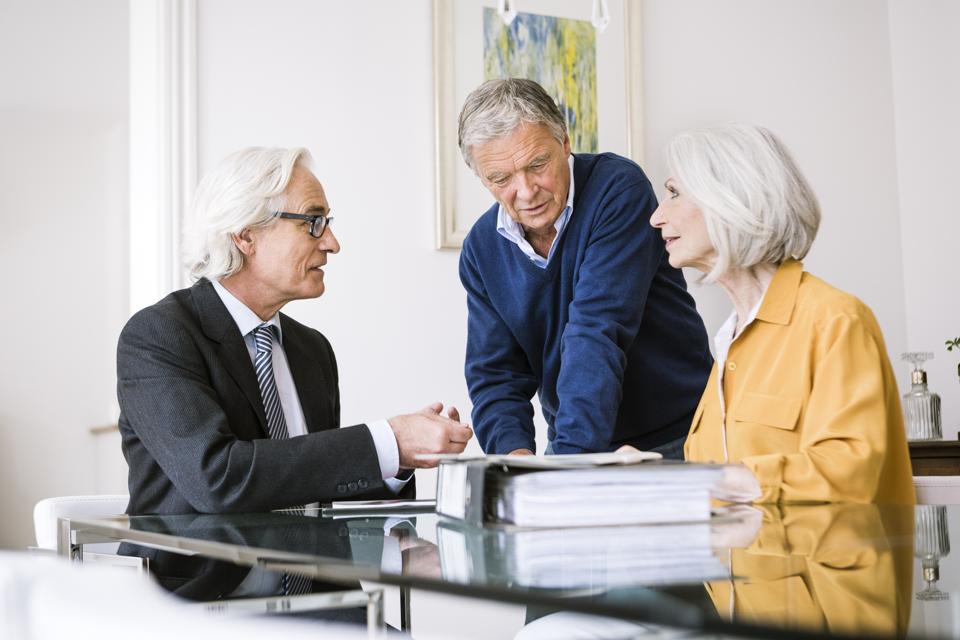 When the returns are nominal rather than real, it means that the spending numbers are nominal instead of real. They will start at higher values but will not grow for inflation. Returning to the same example, seeking 90 percent success through age ninety-five allows fixed spending of $47,746, which is 28.4 percent more than the corresponding $37,194 inflation-adjusted spending number from the previous exhibit. Again, this spending starts at a higher value but stays fixed rather than growing over time. If we compare to the pricing for an annuity providing fixed payments, then it is the numbers in Exhibit 3.14 that provide the most directly comparable values. 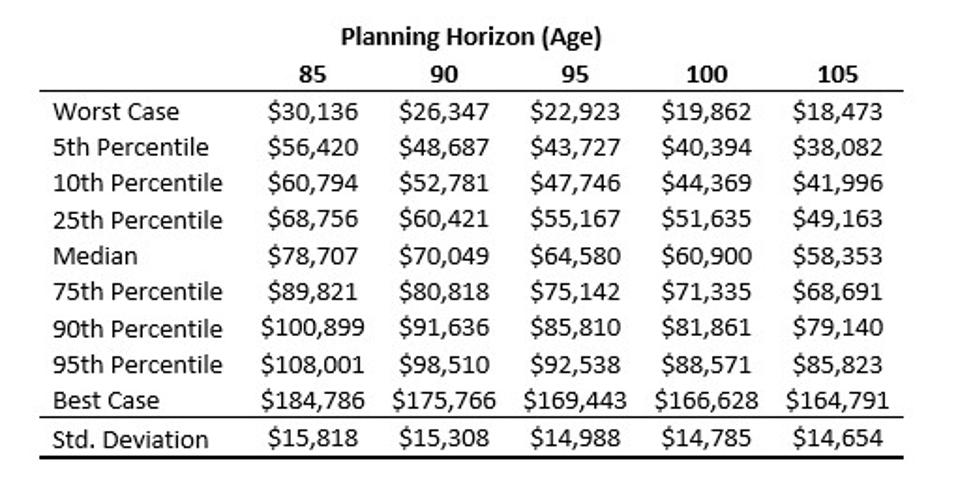 Source: Own calculations with 100,000 Monte Carlo Simulations for a 50/50 portfolio of stocks and bonds. These calculations are based on the net portfolio returns shown in Exhibit 3.11. The portfolio’s nominal arithmetic return is 6% and standard deviation is 10%.

To plant the seed for where this analysis is heading, in Exhibit 4.1 from the next chapter, I calculate that the lifetime fixed payout for a $1 million premium to a life-only income annuity for a sixty-five-year-old female is $57,800 per year. That number can be directly compared to those shown in Exhibit 3.14, since in both cases we are discussing nominal spending that does not grow with inflation. Suppose this individual is considering an investments solution for retirement and will use a 50/50 asset allocation to stocks and bonds and agrees with the net return assumptions for which this example is based.

Suppose further that she seeks a 90 percent chance that her portfolio will last to age ninety-five. In this case, she would use the 10th percentile assumption for age ninety-five, which allows spending of $47,746 per year. Because this amount is less than the annuity provides, it means she would need more assets to support the same amount of spending as the annuity while preserving the degree of comfort she desires for meeting her retirement income goal. In this case, she would require 21 percent more assets, or $1.21 million devoted to spending from the investment portfolio to comfortably match the amount of spending that the annuity could provide with $1 million.

These discrepancies would become even larger if she were even more longevity risk averse. For instance, if she sought a 95 percent chance that her portfolio would last to age 100, she could only spend $40,394 annually. In this case, her nest-egg would need to be 43 percent larger, or $1.43 million, in order to match the protected lifetime spending level afforded by $1 million in the annuity.

On the other hand, if she were less longevity risk averse, it is possible that investments would let her spend more than the annuity with the caveat that the chances of outliving the investment portfolio would increase accordingly. For instance, if she sought a 75 percent chance that her assets would last to age ninety, then she could spend $60,421 from the portfolio, which is larger than the $57,800 that the annuity could support from the same underlying asset base.

These comparisons will become important later in the book when we discuss how to integrate the retirement asset base to build retirement income strategies that can more efficiently meet the various financial goals of retirement. But before that, we must introduce risk pooling and how annuities and life insurance can also serve as potential tools in a retirement income plan. We will now shift from the risk premium to risk pooling.

This is an excerpt from Wade Pfau’s book, Safety-First Retirement Planning: An Integrated Approach for a Worry-Free Retirement. (The Retirement Researcher’s Guide Series), available now on Amazon AMZN﻿

Add Up The Pieces: The Vanguard Value ETF...

5 Ways To Protect Yourself From The Latest...