Home Business This Week In XR: Qualcomm Designs Device Of Future, Facebook Buys Beat Games, Something You Can’t Have For Christmas
Business

This Week In XR: Qualcomm Designs Device Of Future, Facebook Buys Beat Games, Something You Can’t Have For Christmas 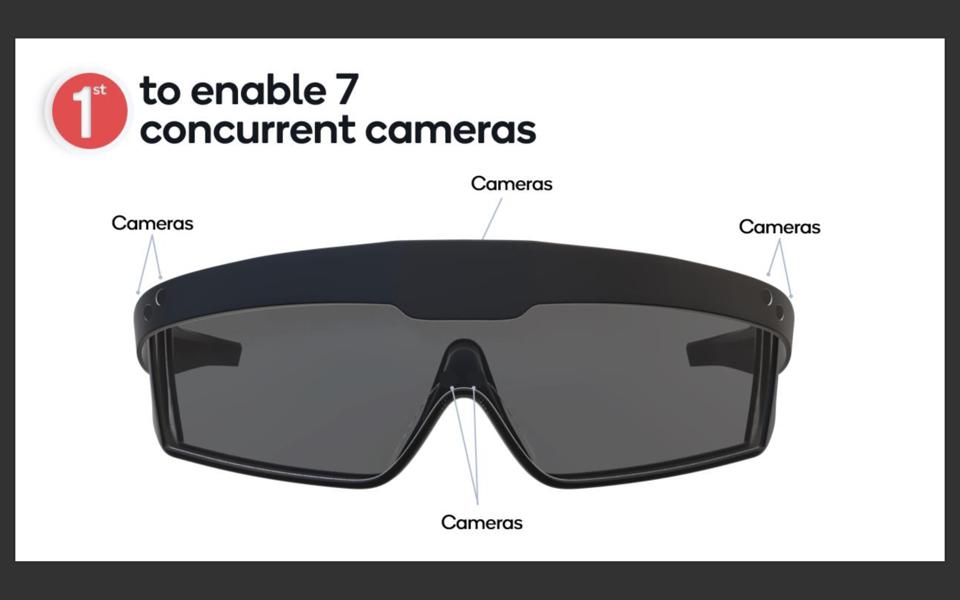 The big news this week was Qualcomm’s announcement of its new XR2 Snapdragon platform and massively upgraded 865 chipset, optimized for 5G, XR and AI. In addition to across the board upgrades to speed, performance and overall capabilities, the new XR2 platform and reference design feature seven cameras (or sensor inputs), and a pass through ability that makes the camera your eyes, and enables true MR. This is especially interesting in light of Apple’s recent non-announcement that it, too, will be using a pass-through method, as opposed to the see-through method used by the Microsoft HoloLens and Magic Leap One.

While we were eating Thanksgiving turkey here in the States, Facebook’s Oculus acquired Beat Games, makers of Beat Saber. Arguably the most popular VR game, and only title so far to reach viral status, Beat Saber is now owned by the company behind much of the consumer VR market. According to Oculus, “The Beat Games team will operate the same way they have to date as an independent studio, and they’ll continue to work on Beat Saber across all currently supported platforms.” Can’t help but wonder what those prime time ads featuring Beat Saber cost, and how many Oculus Quests Facebook expects to sell this holiday season. 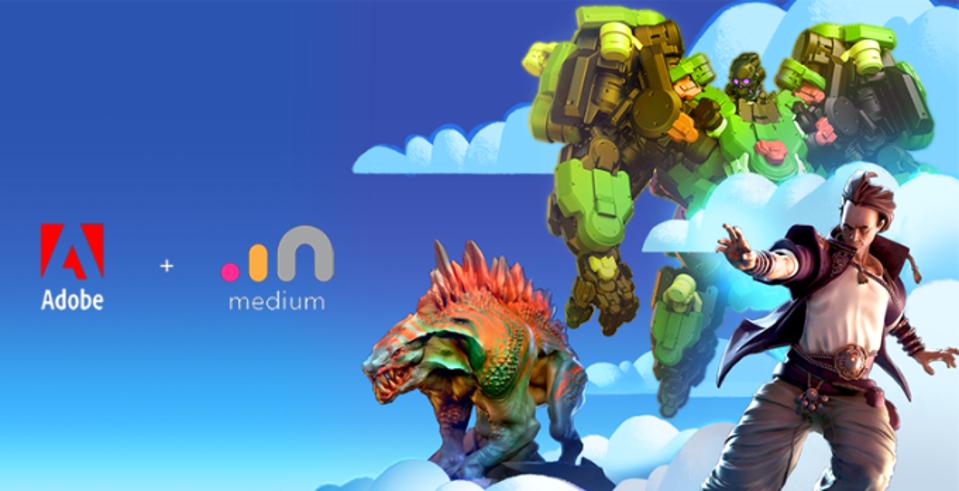 Adobe acquires Medium, going all in on 3D following the launch of Aero.

Adobe acquires Oculus Medium for 3D artists working in VR. Medium is a 3D sculpting tool for virtual reality, built initially by the team at Oculus for the Oculus Rift. Adobe says they intend to add Medium into their 3D art pipeline. Medium is available on all major VR headsets. We’re wondering if Medium will make its way to the Creative Cloud like Adobe’s other offerings. 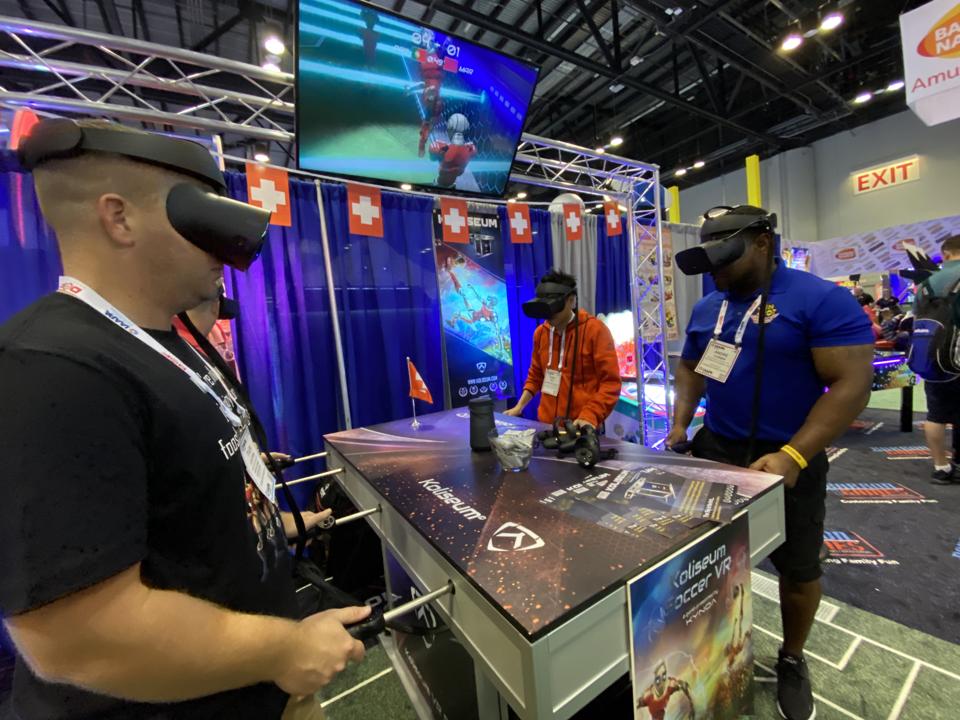 Four player VR foosball, one of our picks for “Best at IAAPA.” It’s not your granny’s pub anymore.

The 101st edition of the giant theme part convention, IAAPA, which concluded November 20th, featured over seventy-five attractions that featured VR. We wrote all about it in this three part series: Part One, The Best; Part Two, VR Enclosures; and, Part Three: Vehicle Simulations, VR Coasters & Other XR Surprises.

New Magic Leap game Strangelets from Insomniac Games now available. The new game takes place wherever you’re wearing your Magic Leap One headset and places portals to other dimensions around your space. Alien creatures emerge from the portals and must be rescued by the player. The game is available for $4.99 on the Magic Leap World app store.

Gucci and Snap partner up for glamorous Spectacles 3. While not available (yet?) for purchase, you can try on a pair using Snap’s AR face filters. Spectacles 3 are Snap’s newest camera enables sunglasses, sporting 2 cameras for recording depth information. To see what’s possible, check out the video created entirely using Spectacles 3 footage.

Wonderscope wins BAFTA Children’s Award for new educational AR experience. A Brief History of Amazing Stunts by Astounding People uses augmented reality to portray three real stunts that wowed the world, and the people behind them. The award was given to the studios behind the new titles, PRELOADED and  Within.

Mixed Reality fitness game launches for the Vive Focus. Our friend Tony “SkarredGhost” Vitillo and his team recently launched their first title on Viveport, Hitmotion: Reloaded, a sci-fi boxing game built to be played using the Vive Focus’s mixed reality capabilities. Thanks to mixed reality, players can see the room they’re playing in and avoid punching reality during their intense workouts. You can find the game on Viveport for $5.59.

Horror game franchise Five Nights at Freddy’s enters augmented reality. The new AR game from Illumix for smartphones pits players against malfunctioning pizza delivery drones that will attack the players. The robots can be fought and caught by players, much like Pokemon in PokemonGO. Captured robots can then be converted to allies and sent out into the world on salvage missions. A darkened overlay and creepy atmosphere bring the horror aspect of the game alive through the smartphone camera.

Dreamscape announces new How To Train Your Dragon VR experience in partnership with Dreamworks Animation. Dreamworks’ “Dragon Flight Academy” puts players on the backs of a dragon in the first flight academy. Players fly through the sky alongside their favorite characters and dragons from the series. The experience will appear first at the Westfield Century City Mall in Los Angeles, opening Friday, December 13th.

Experience what it’s like to swim like a shark with Shark Dive. The new experience from Immotion Group was created using a VR camera mounted to the dorsal fin of a hammerhead shark. The experience is being offered at zoos and aquariums around the world in support of their conservation efforts. Immotion Group has made previous VR experiences for Zoos and Aquariums such as Swimming with Humpbacks, Congo River Rangers, and Animal Adventures.

NextMind unveiled brain sensing wearable at Slush 2019. The non-invasive device rests on the back of a wearer’s head and detects brain activity in the visual cortex. A wearer’s neuron activity is analyzed and transformed into commands that can be used by any software. Whether it’s pausing a movie, meditation training, or interacting with a virtual world the use cases are feasibly endless. Development kits are set to begin shipping early 2020 with pre-orders starting around January next year.

Something you can’t have for Christmas: the Wowcube. We were wowed. Unfortunately, we’re all going to have to wait until next year.

Strong Trademarks: A Key To Boom In Online...